March 27, 2018:  We believe that Colorado Front Range citizenship entails a holy trinity of dogs, beer and Subarus.  We didn’t find a Subaru, but we spent February exploring the other two branches.

As we told you in our last post, we spent February in Loveland, CO.  Our first priority was taking care of Kai (the little one, she’s a toy Australian Shepherd) and Marley (some part Great Dane, plus some other influences).

This was our third house sitting adventure.  Of course, it’s really been dog sitting, but the house comes with the deal.  Our first house/dog sit was 3 months in Calderitas, Mexico, and we wrote about that here and here and here.  Our second house sit was only 4 days in New Orleans, and we wrote about that here.  So far, not a bad experience in the bunch.

This time were house sitting for a really nice couple, Paula and Bradley.  They are like-minded folks who decided to get off the daily grind and do their own thing. We stayed up way too late talking the day we arrived, which happened to be the night before they had to get up pre-dawn to fly off to Mexico for a month.  We hope the flight wasn’t too rough.

Anyway, Paula and Bradley welcomed us with super open arms into their home for our stay.  We couldn’t have felt more comfortable. And we got dogs to play with for a month.  Why don’t we have to pay for this?

Kai is either full go or sleeping.  There’s little in-between.  [click to enlarge]

We’re pretty sure she’s part cat; hyper curious and not entirely sure about unexpected objects in her environment.

Marley, who is the size of about 20 Kais, would like to think herself a lapdog.  She is super sweet, but she’s not allowed on the furniture!

Marley is the most vocal dog we’ve met.  She doesn’t bark much, but rather makes noises that sound something like short whale songs.  We tried playing her some actual whale songs to see if there was a common language, but she didn’t seem to recognize anything.  She was mostly interested in pulling on the other end of a rope, dragging Kai around by the collar, or guilting us into petting her.  [click to enlarge] 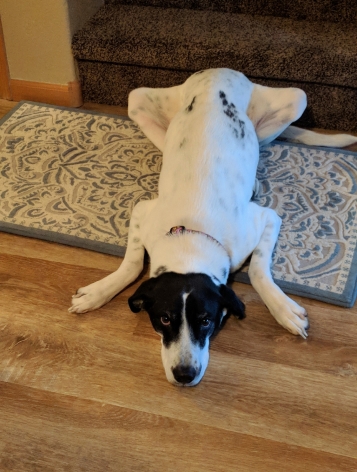 They’re great dogs, and we will miss them.

When we weren’t playing with dogs, there was plenty of beer to drink.  (Not that those are mutually exclusive.)  Colorado’s Front Range is the Napa Valley of beer.  When we were there, Loveland had 8 breweries, with 3 more under construction; Fort Collins has just under 30; Longmont, a half hour to the south, has another 15 or so.  And then there’s Boulder with 25 or so.  And then there’s Denver with 50+.  All within an hour of Loveland.  It’s nuts.  In fact, we hit 4 breweries before we even made it to our Loveland base.

On our way North, we stopped in Pueblo.  There, we first checked out Shamrock Brewing, which feels very much like a neighborhood Irish Pub-style bar.  No knitted caps or waxed mustaches here, nor many tourists.  But they had a couple of house brewed beers on tap, and they were pretty good renditions of well established styles.  After Shamrock, we walked down to the (dry) riverwalk area of town to the decidedly more hip Brues Alehouse, where the beers, as well as the crowd, were fancier and more expensive.

On our way to Loveland the next day, we stopped at 300 Suns Brewing in Longmont for some tasty beers and a really good lunch in their small tap room.

We really like the tap room culture.  (Big surprise, we know.)  These are not rowdy all night bars, they are generally very laid back places, as busy during the day as at night.  There are plenty of dogs and kids in view.   People play games and talk.  You will likely find someone behind the bar who is at least knowledgeable about what they sell if not downright passionate.  No one is going to ask you whether you like light or dark beer.  For those unsure about entering the scene, know that the uninitiated will be treated as potential cult recruits rather than art house poseurs.  Go, give it a try.  Beer people are nice, and they want you to be one of them.  They won’t laugh at you, they’ll make it their mission to teach you.

At Grimm Brothers Brewhouse in Loveland, we expressed our relative ignorance of some of their less common (in the US) classic German styles of beer, and that led us into a half-hour long history lesson and discussion, including several samples.  Call us beer nerds, but we think learning about beer while drinking beer is a nice way to pass some time.

Just north of Loveland, Fort Collins is home to two of the larger craft breweries in the US, Odell and New Belgium.  Odell has a very nice facility with lots of outdoor space, including fire pits and an outdoor stage.  It reminded us a bit of Surly in Minneapolis.  They also have a bike share station right outside their front door.

New Belgium is the largest craft brewer in Colorado, by a good margin (and #4 in the nation).  Their production facility is larger than Odell, and they have a similarly nice, big open indoor and outdoor space.  And look at this:

They’re practically neighbors!  (And, yes, there is another brewery on that map.)

We did enjoyable, free tours at both spots – the New Belgium tour was much more extensive with plenty of free samples.

New Belgium is employee-owned with no outside ownership by any of the mega-breweries, which have been busy buying their way into the craft beer scene recently.  Our tour spent a lot of time going over just what a wonderful place it was to work (free custom bicycle at first employment anniversary, not to mention ownership stake, paid time off, health insurance, etc.) and how they were absolutely not going to sell out to anyone, ever. They really mean it.  On the other hand, when they open a can of Fat Tire and hand it to you, you’re generally happy to listen to whatever they have to say.  Overall a very good tour.

A really nice thing about every brewery we visited in CO is the “taster” size glass of beer.  Sizes vary from 3-5 oz, (a little bigger than the 2-3 oz samples in a lot of places) but they allow you to sample what is on offer without getting hammered.  And for some of the really dark, heavy, boozy beers, or the particularly sweet or sour, 4 or 5 oz is all you really want.

In some places we’ve been, they want you to order a set number of samples in a flight.  In Colorado, you’re generally free to order one at a time or in any combination you wish.  We used to try to sample every beer that a brewery made, figuring that we would exposed to some good beers of styles we don’t normally seek out otherwise.   However, when we were in Santa Rosa, California (which you can read about here) after visiting Russian River Brewing and sampling their famously wonderful beer, we walked over to Third Street Aleworks where they serve less famous, but also world-class beer.  When they asked what we would like, we said, “One of everything, please!”  They had 24.  After (mostly) finishing those, we then walked to the Santa Rosa post office, picked up our absentee ballots from general delivery, and voted in the 2016 Presidential Election.  Ta da!

So now when we go to breweries, we’re usually more considered, and typically share a select flight of samples, and maybe order more if we like what we’re getting.  Sometimes we’ll order a whole beer (or 2) if there’s something we really like, or we’ll take some to go.  In the picture above, under the taps, you can see empty “crowlers”, which we first experienced in Colorado.  They’re 32 oz cans that the brewery fills to order, and then crimps on the top.  You’ve got a big can of beer that can be stored for months, we’re told.  A good alternative to traditional glass growlers.

Nearby Longmont is also home to a couple of the heavies in craft beer, Oskar Blues (original location in Lyons, CO) and Left Hand Brewing.  Beer, beer, beer! 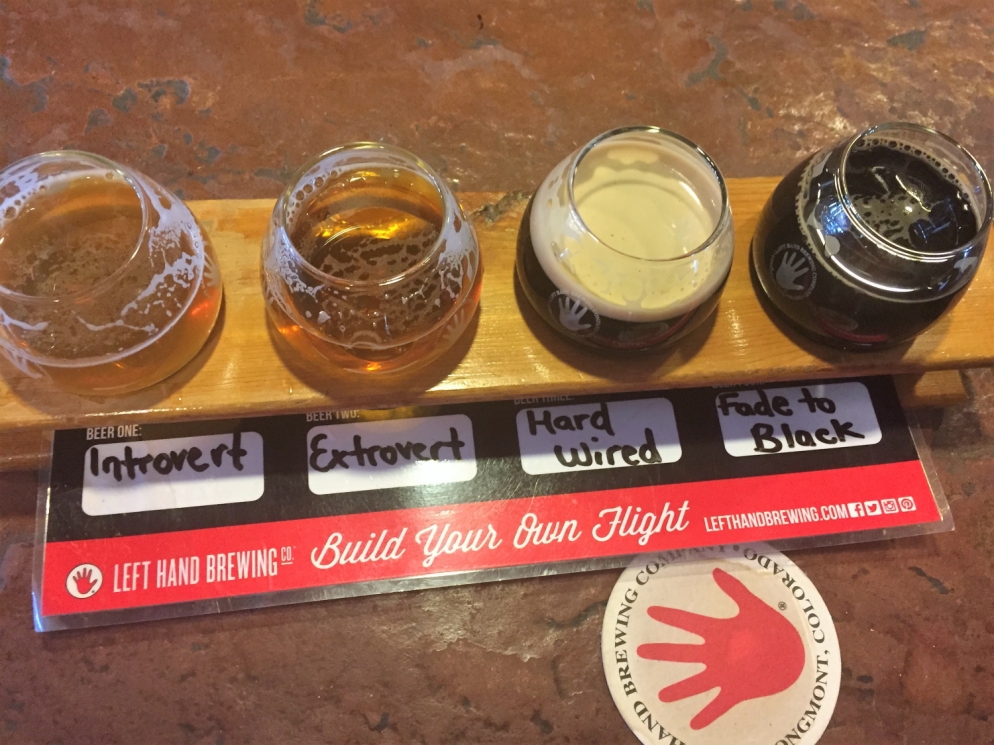 The beer at these places is always better than you’ll find in the bar or on the shelf.  Not only will they have more variety, but even their mainstay beers will be fresher and tastier.

This wasn’t our first time on the Front Range and it surely won’t be the last.  It’s a beautiful area filled with lots of stuff that we like.

We are about to be off on new adventures, and we’ll be writing about them soon.  Thanks for reading!

3 thoughts on “Our House on the Front Range: Dogs and Beer Edition”