It snowed in south Texas last week; it was the second time it has snowed in Blessing, Texas in approximately 40 years.  Ironically, we think this might be the only time it’s snowed on the van since we’ve owned it.

You may have wondered where we disappeared to.  No, we have not gone off on a bunch of wonderful adventures and simply failed to tell you about them.  We’ve been spending a lot of our time in Blessing, for various reasons.  However, we have taken a couple of small trips recently, just to keep the travel muscles from atrophy, if nothing else.  And here’s a little blog post exercise for you.

In early November, we decided to take the van out for a short local trip of a couple nights.  Our first stop was in Palacios, Texas, where we dropped in at The Point for breakfast.

The Point is a typical coastal convenience store selling the usual c-store fare, plus fishing gear and bait.  But they also have a small kitchen and serve food at a few long tables.

The Point features Vietnamese and Mexican cooking, and we have had pho and bahn mi there several times, but at breakfast, it’s Mexican only, and that was fine for us.

The food here is well worth the stop.  A little over a year ago, The Point was featured in a scene of the Houston episode of Anthony Bourdain’s Parts Unknown.  And that fact won’t escape you if you eat here.  There are picture of his visit all over the place.

After breakfast, we headed down the coast toward Corpus Christi.  Along the way, the lingering effects of Hurricane Harvey soon became apparent.  Before Harvey quite famously dropped 50 inches (127 cm) of rain on Houston, it made landfall August 25 near Rockport, Texas, as a category 4 storm.  A little over 2 months later, debris and devastation are unsurprisingly still evident. 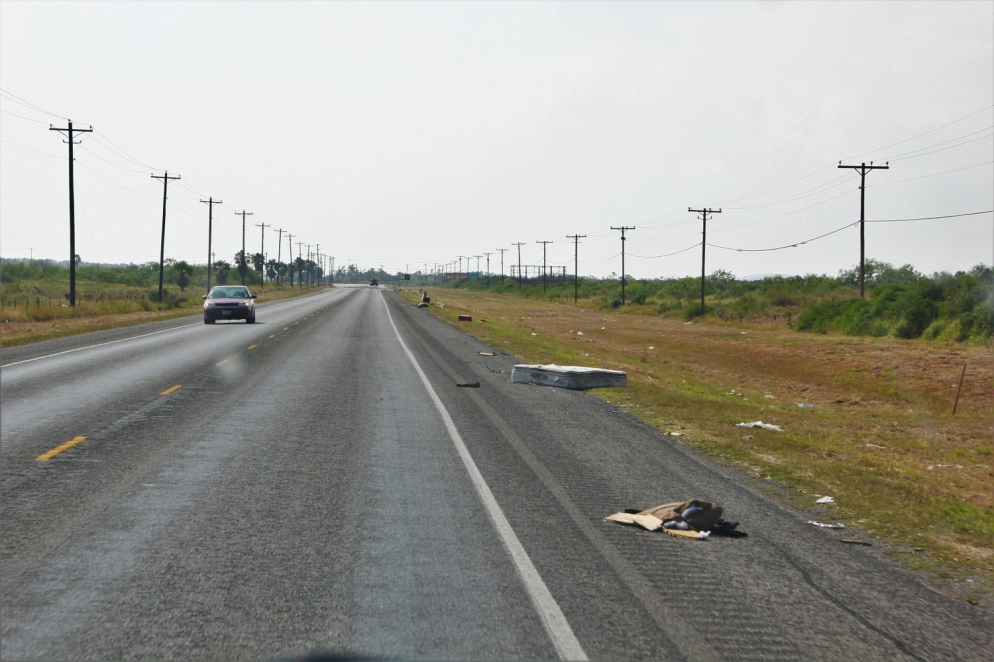 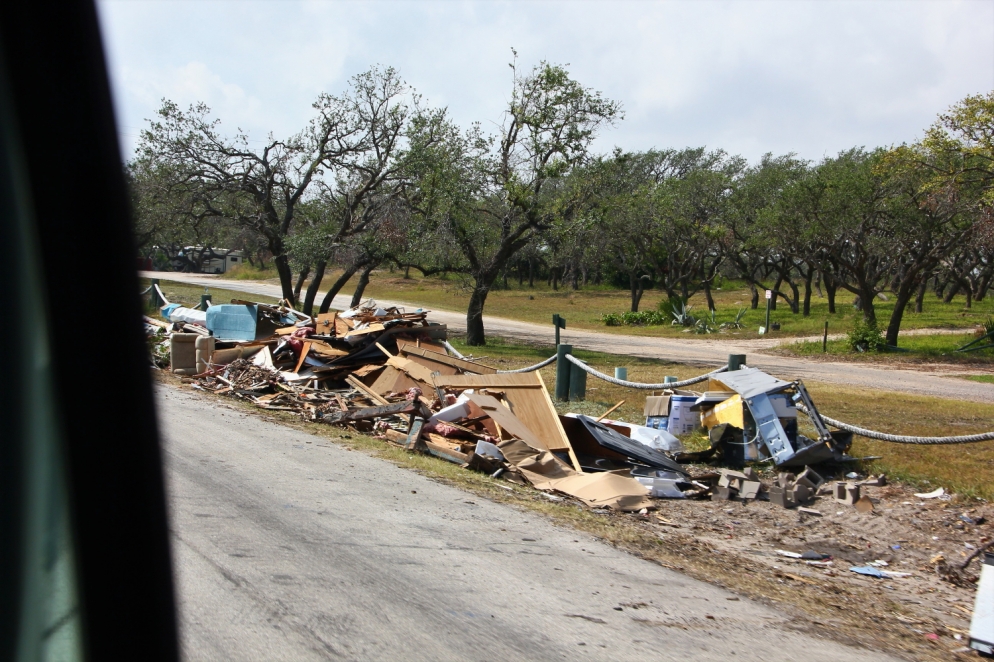 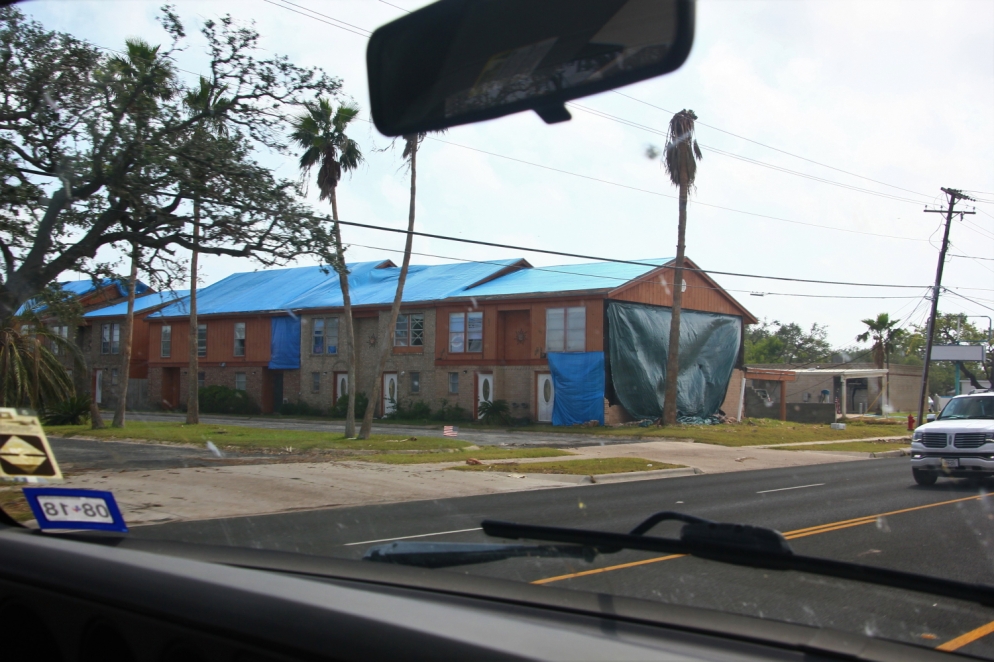 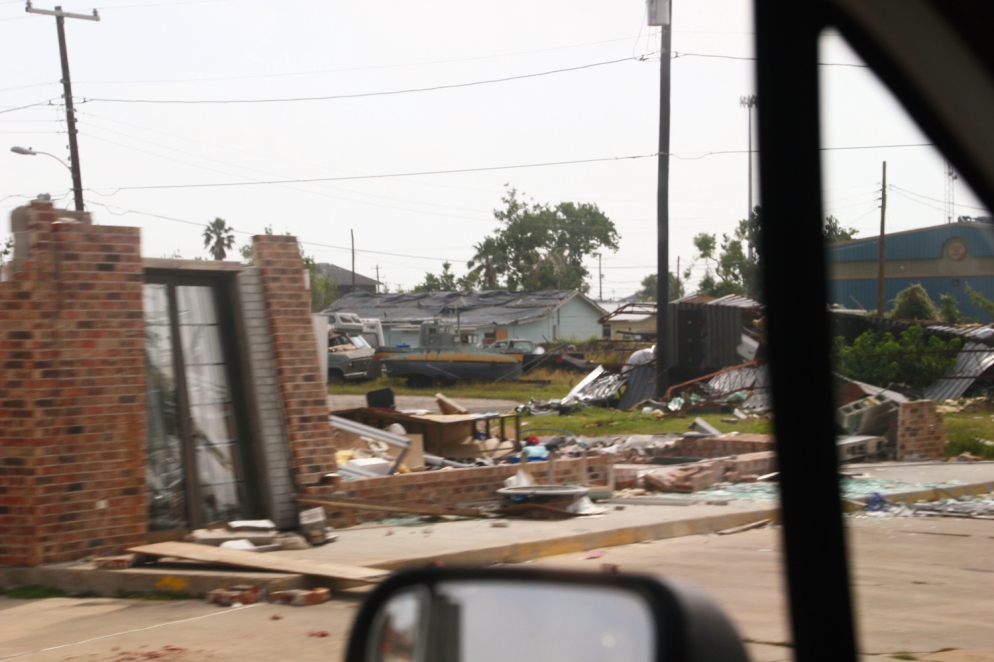 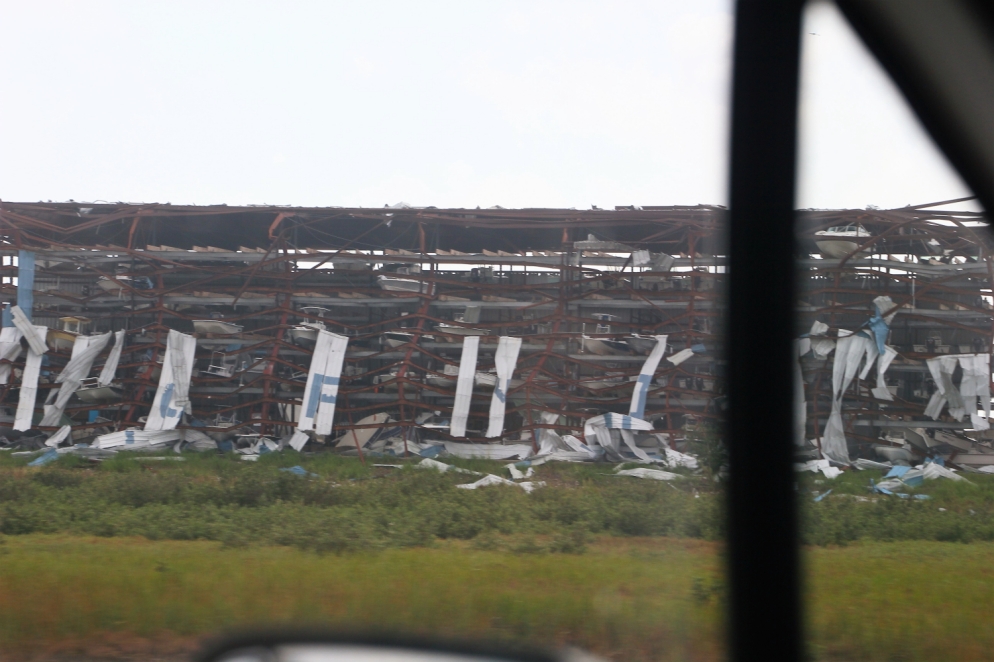 Outside of Rockport, an enormous pile of debris collected from the surrounding area was being trucked off. 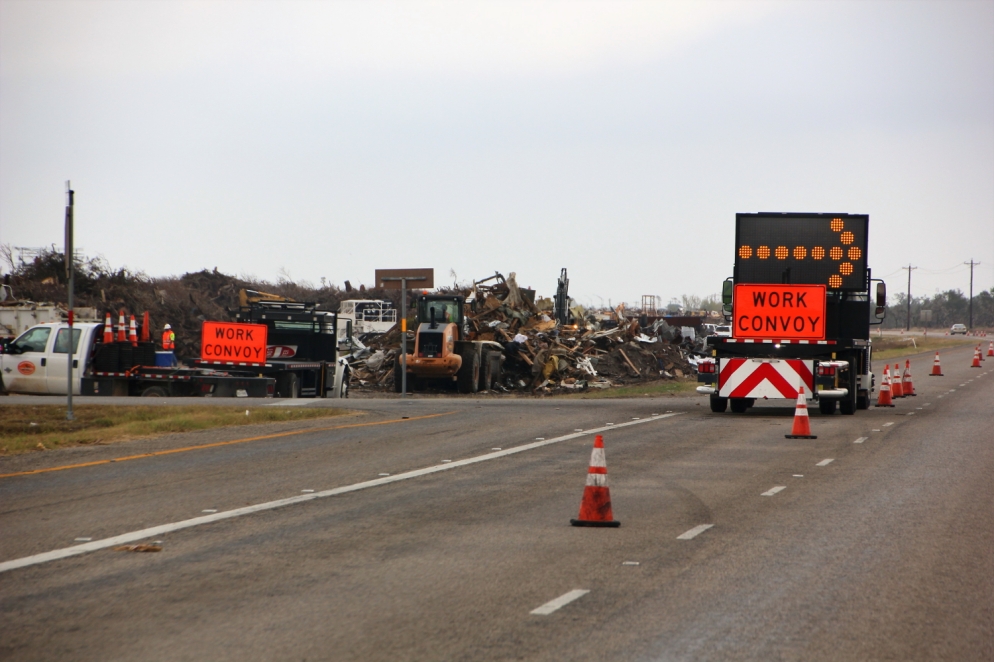 We arrived in Corpus, and stopped to walk around North Beach.  In the background you can see the USS Lexington, a WWII aircraft carrier, now a museum, of the same class as the USS Intrepid, now a museum in New York City.

We found a pretty decent little brewery in Corpus:

Leaving Corpus, we headed out to the nearby Padre Island National Seashore, which is, apparently, the longest stretch of undeveloped barrier island in the world.  We had been there together, but it was a long time ago.  Geologically significant time had passed.

Several area state and federal campgrounds in the area were still closed as a result of hurricane damage, but this campground right behind the dunes from the beach was open: 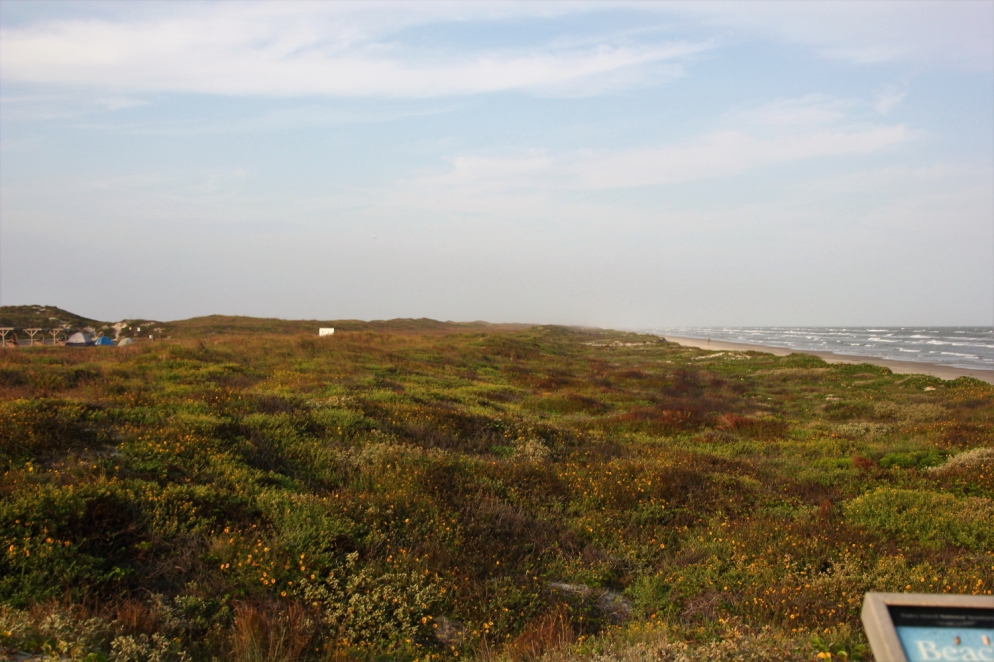 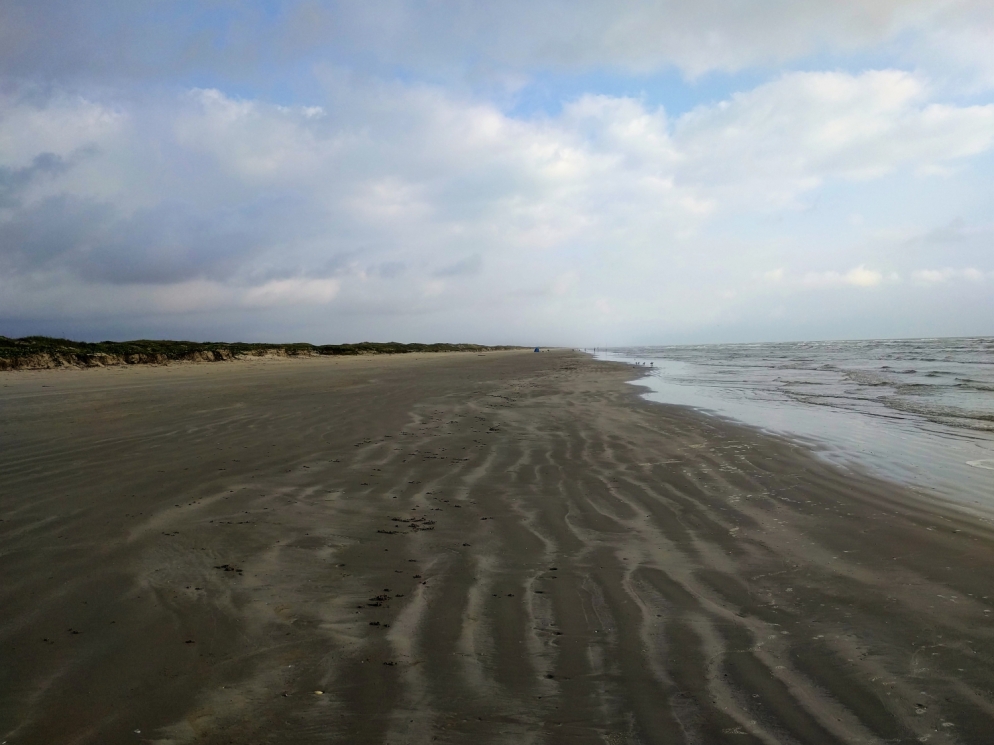 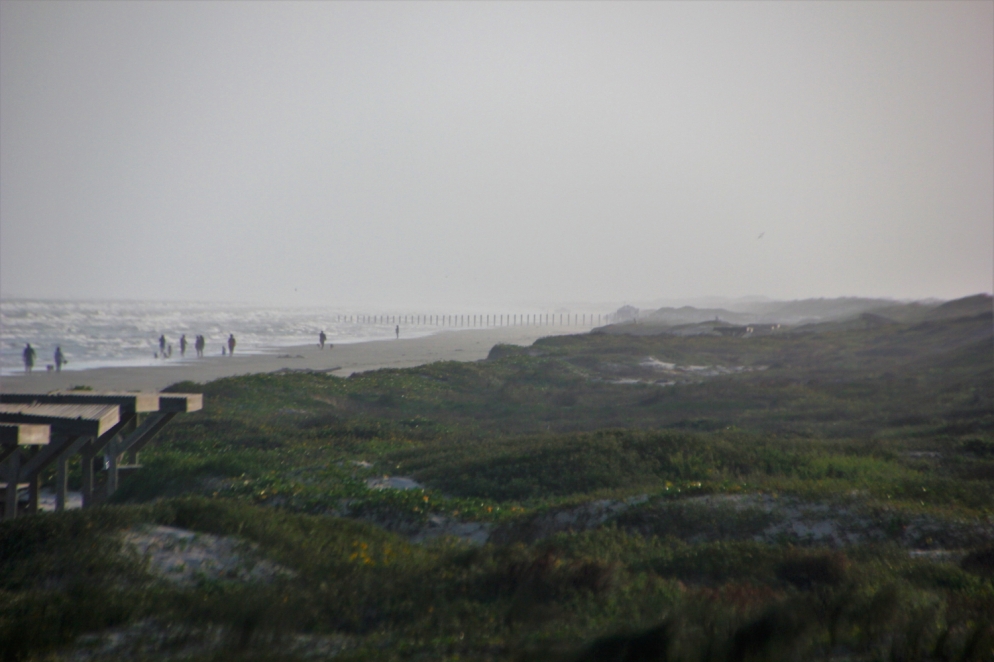 Padre Island is a really nice place, and it’s pretty close.  We will definitely be going back there, particularly now that it’s cooler.  It was muggy at night in November, almost too hot to sleep.  Poor us, right?

The path of our short Texas trip:

The next week, we took a short house-sitting gig to spend some time in a city we really like.  Can you guess where?

I’m sure you got it, but just in case:

The house sit was, as usual, really a dog sit, and we had this nice little pack to hang out with: 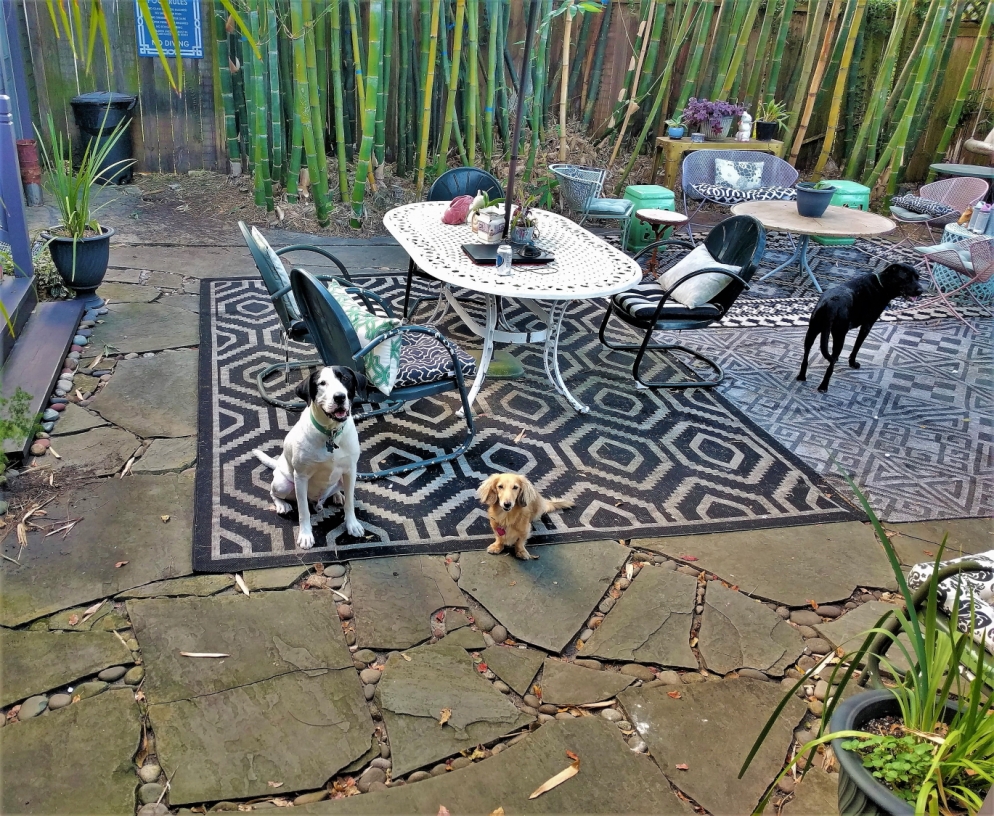 The weather was perfect, and we had some work to do, so we got up, walked the dogs, then sat outside and did some work, had lunch, probably took a nap, walked the dogs again, and then it was time to go out and do New Orleans stuff, i.e. eat, drink, and talk to strangers.

The house is the domain and ongoing work of artist Miranda Lake.  (That’s 9 links, by the way.) 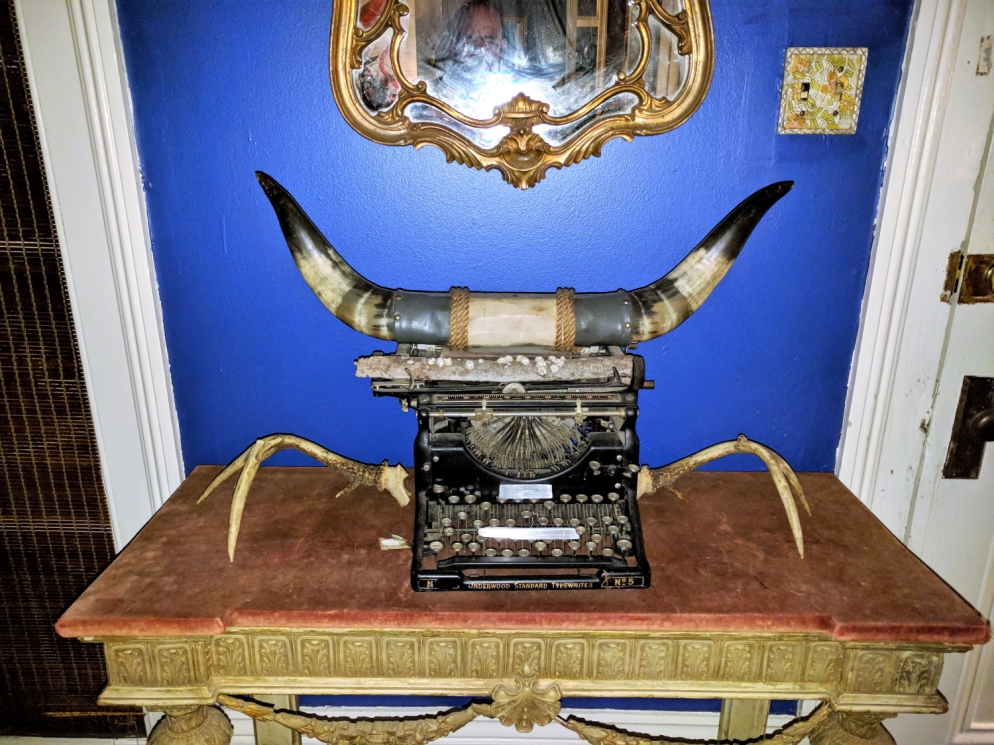 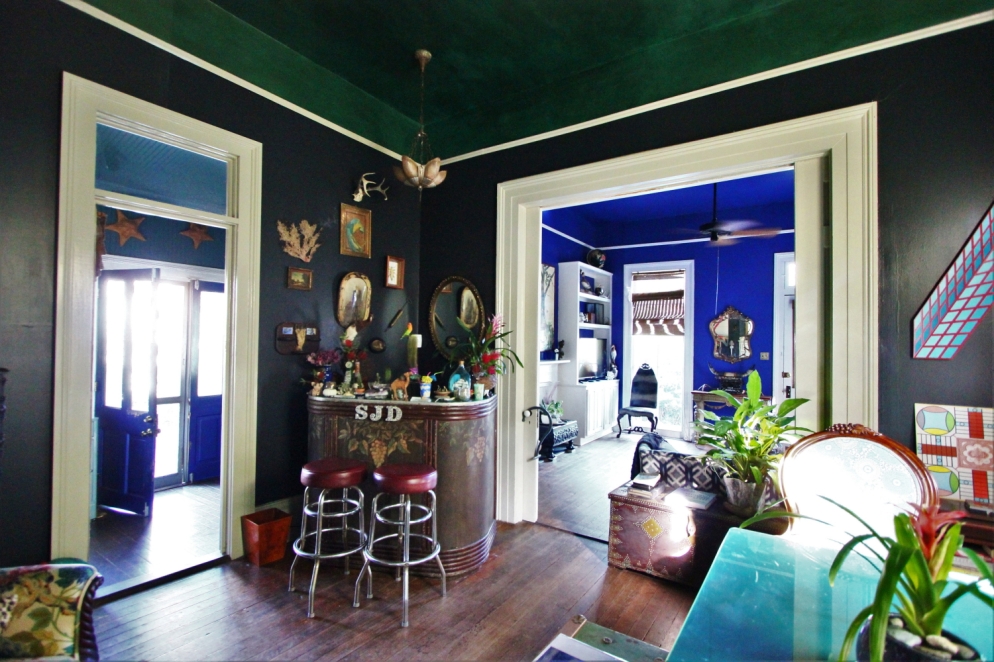 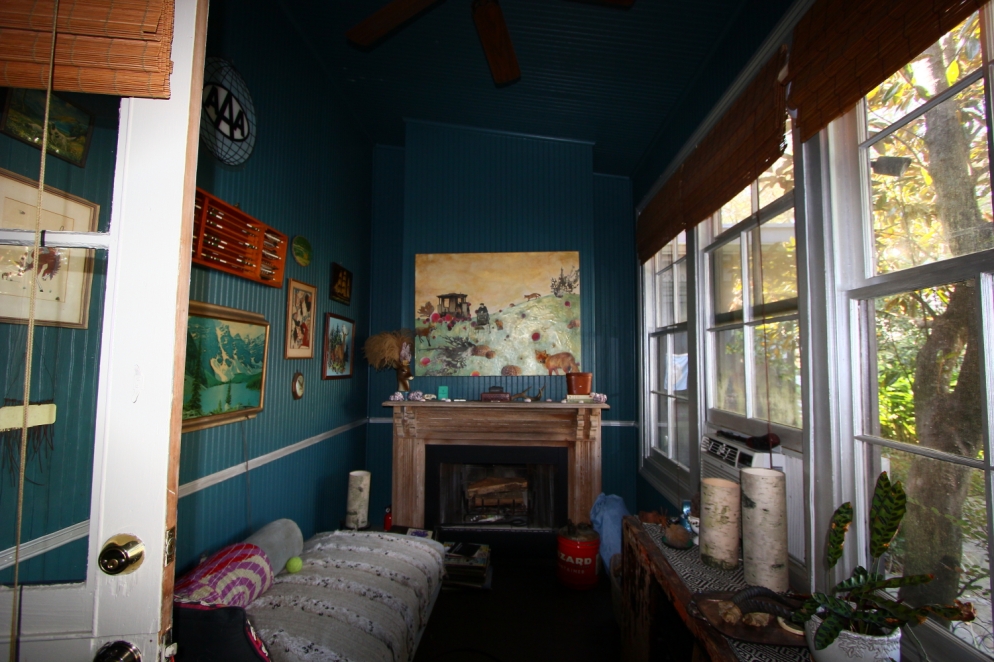 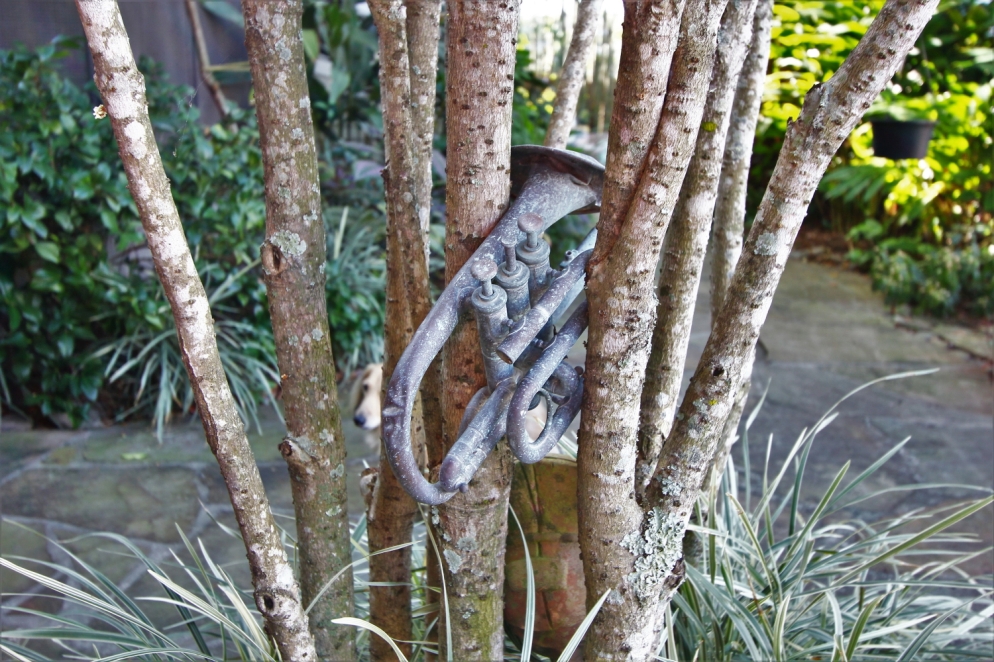 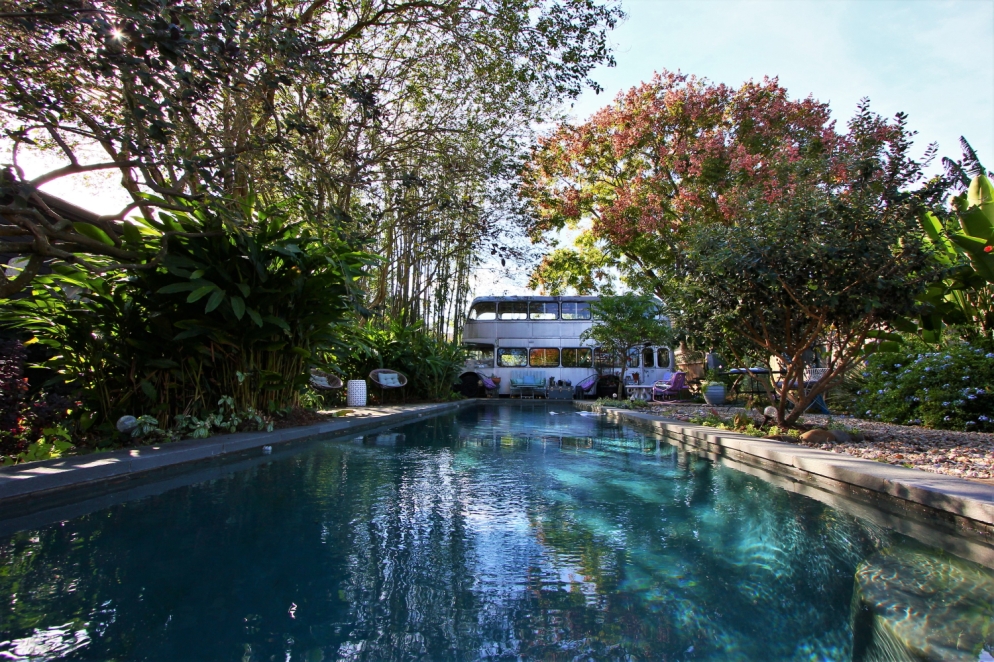 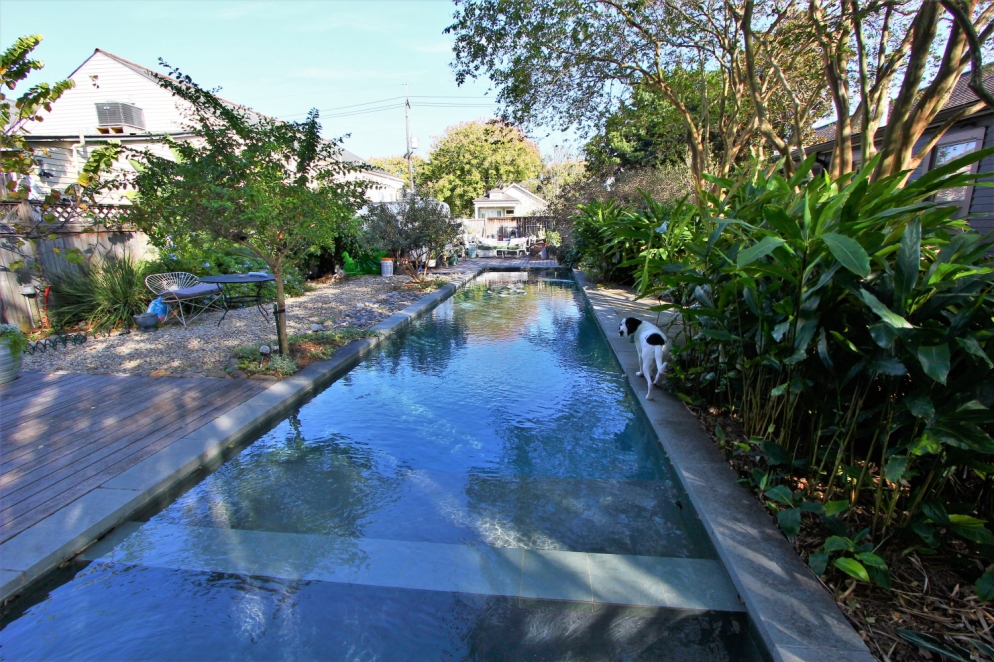 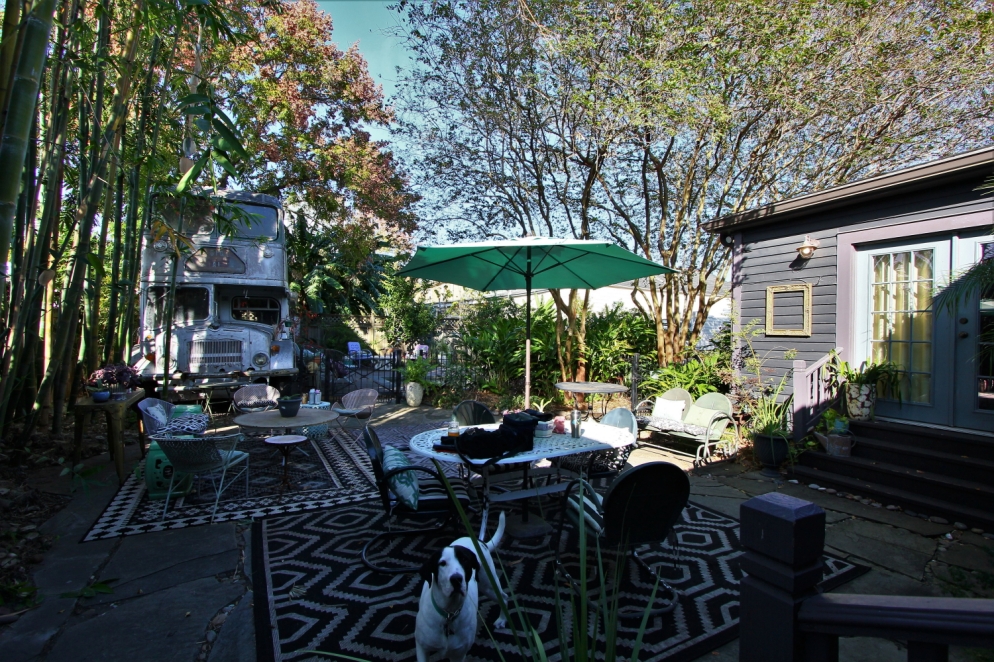 We didn’t do a whole lot of noteworthy things in the city this time, but the neighborhood, Freret, was new to us.  It’s in the general Uptown/Garden District area, but more off the usual tourist path.  A short walk from the house is Freret Street, with a nice collection of bars and restaurants catering to locals.  It was a relaxing time, and we made a new friend.  A nice way to spend a few days.

So that’s it for now.

But don’t worry, we’ll be back! 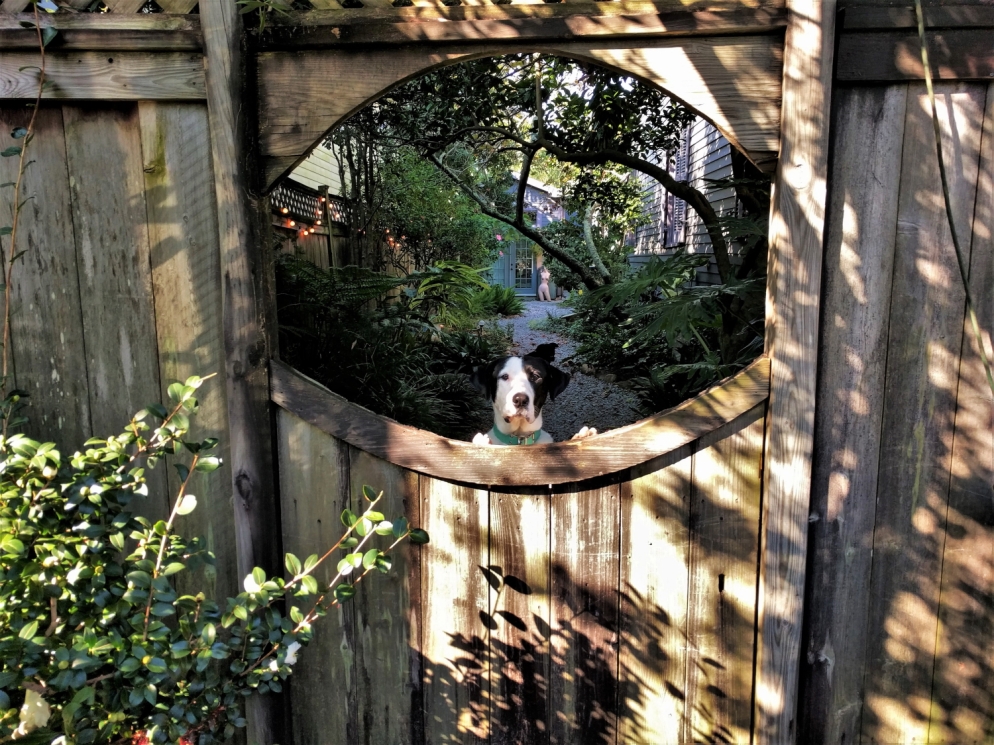 4 thoughts on “Our House in Familiar Places”