We had the opportunity to spend February in Loveland, Colorado.  We were housesitting again, and we’ll tell you all about that in our next post.

We drove from Blessing, Texas to our destination over the course of a couple of days.  The first day was a 660 mile (1062 KM) long slog to Amarillo, where we simply spent the night.  We were told that there’s a cool scene developing around downtown Amarillo, and maybe we’ll check it out some time, but for this trip it was a hotel on highway outside of town.

The next day we drove half as far, to Pueblo, Colorado.  Our route cut through the northeast corner of New Mexico, and there we stopped to check out Capulin Volcano National Monument. 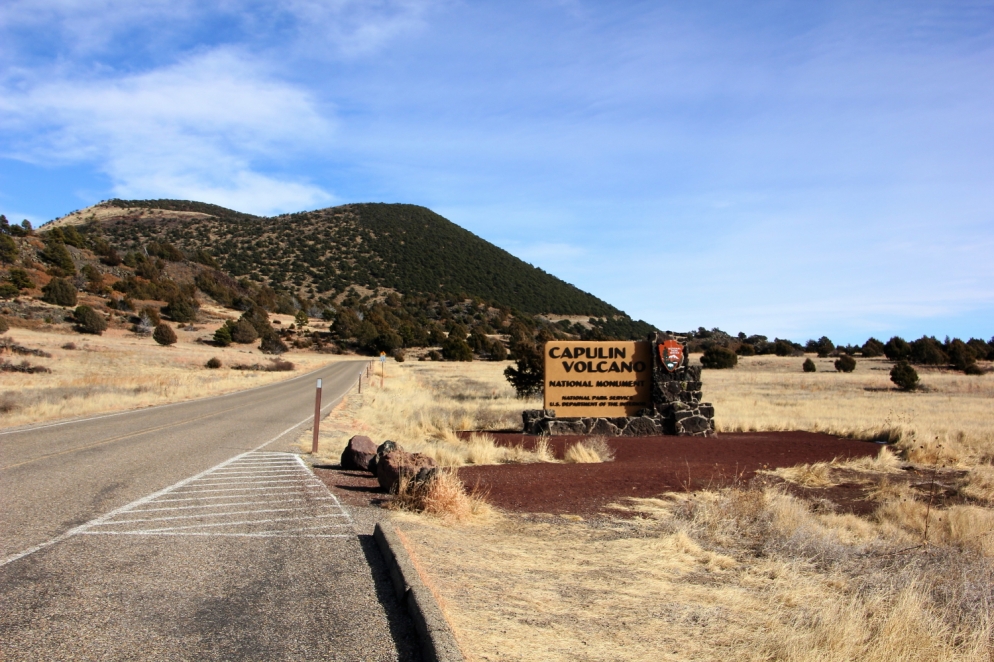 This volcano erupted as recently as about 60,000 years go.  It’s a baby in volcano years.

A road winds up the volcanic cone to a parking lot on the low point of the rim.  From there, you can hike down into the crater, or walk a trail around the rim.

The walk around the rim provides some nice views. 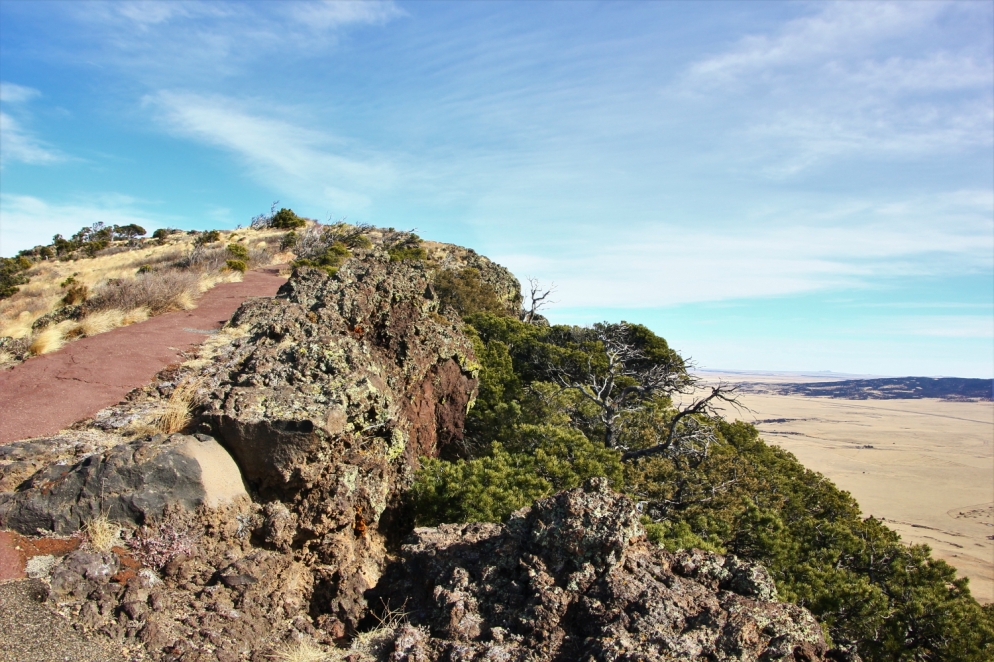 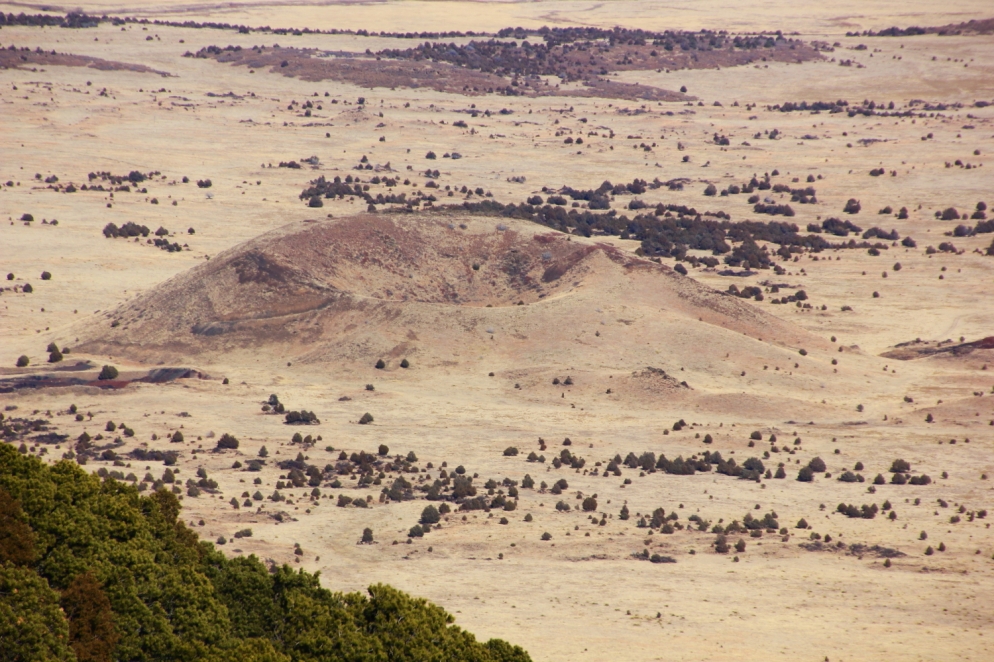 From here, you can where lava flowed out of the volcano we’re standing on, into the middle of the picture:

Scattered around the nearby grasslands are piles of rocks in sizes between a tree stump and a small car, the remnants of lava bombs hurled out of the volcano during its eruptions.  A few tens of thousands of years, especially in a dry climate, doesn’t do much to erode volcanic rock.

Nope, this bench was not damaged by careless smoking:

From Capulin, we continued on to Pueblo.  Like a lot of former steel towns, Pueblo is working on redevelopment, part of which is developing a downtown tourist scene, including the river walk you see below.  It’s probably more interesting when the river has water.

We enjoyed our evening in Pueblo.  The next day, we made it to Loveland.

The Front Range is an impressive set of mountains, the eastern edge of the Rockies, that rise suddenly from the great planes in a north-south line cutting through Colorado and into Wyoming to the north.  But when people in the area talk about the Front Range, they’re usually referring to the Front Range Urban Corridor, the string of towns and cities that sit on the edge of the plains, just east of the mountains, centred around Denver.

Loveland is about 50 miles north of the center of Denver, between the college towns of Boulder (University of Colorado Boulder) and Fort Collins (Colorado State).  It has about 75,000 people and is really close to the mountains.  This is the view from our bedroom window. 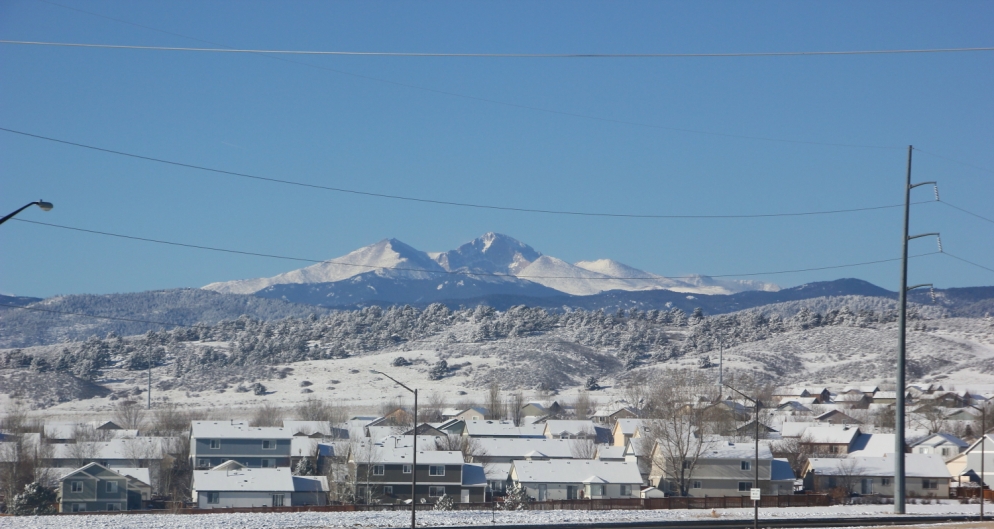 Around Loveland, you notice a lot of sculptures: galleries, gardens, etc., including the large collection in the Benson Sculpture Garden.  There’s something for everyone here.  [click to enlarge] 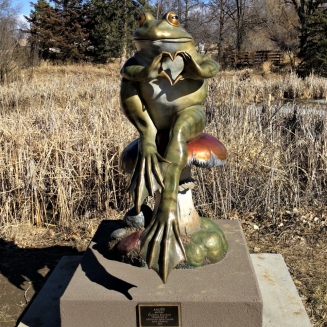 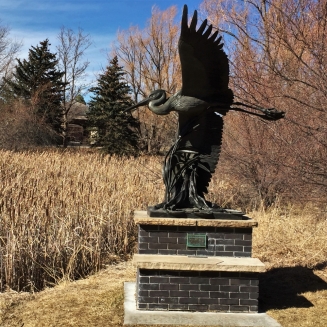 There’s lots of great hiking close to Loveland.  The weather kept us from doing as much as we would have liked but we got in a handful of good ones, including at the Coyote Ridge Natural Area, where the foothills meet the plains.  The trail starts on this flat expanse leading up to the hills, with prairie dog towns (maybe it’s one big town with a trail down the middle?) on either side.  [click to enlarge] 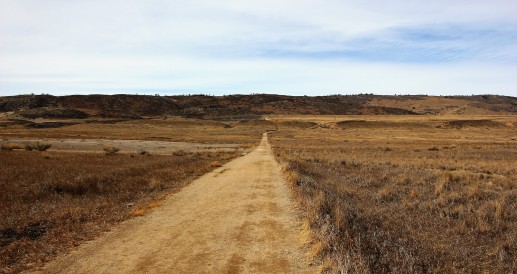 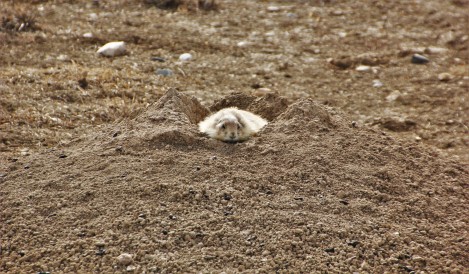 Once we got into the hills, we had to share the trail with a pack of mule deer.  We recently learned that Lewis and Clark named mule deer and lots of other plants and animals that were unfamiliar back east, like bighorn sheep and the whistling swan.  We understand the mule resemblance, but if Lewis and Clark had ever seen a kangaroo, they might have named them kangaroo deer.

They got surprisingly close. 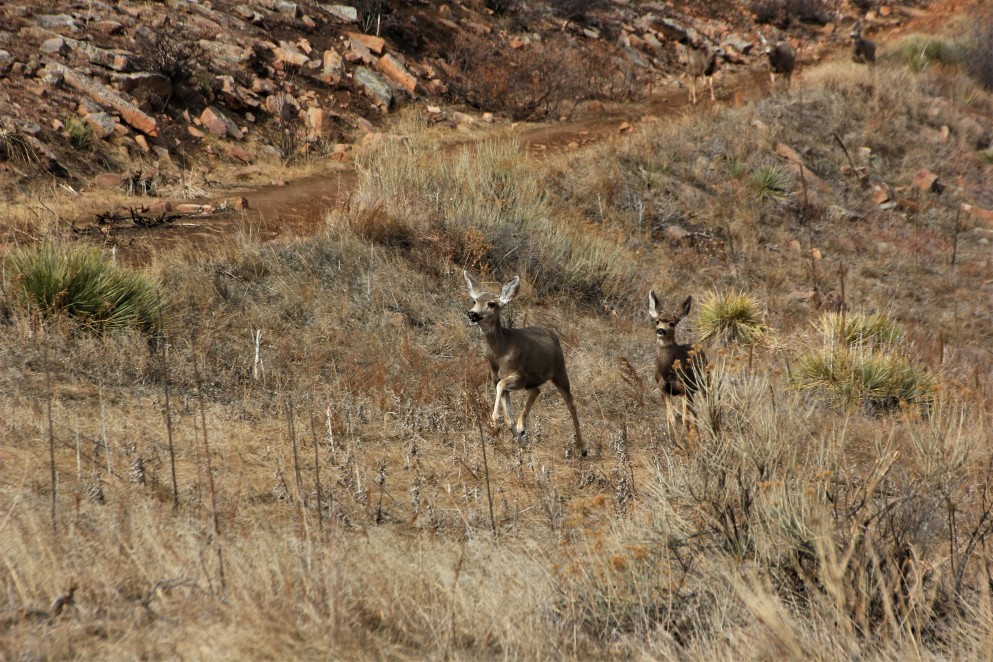 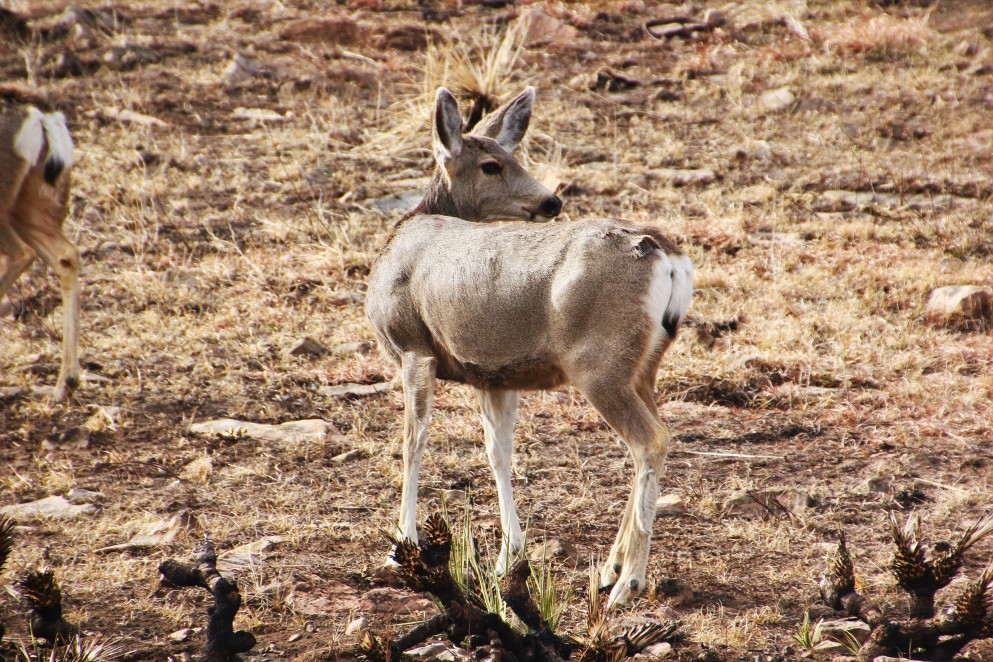 We also got to hike the Devil’s Backbone.  It had lots of interesting rock formations and good views. 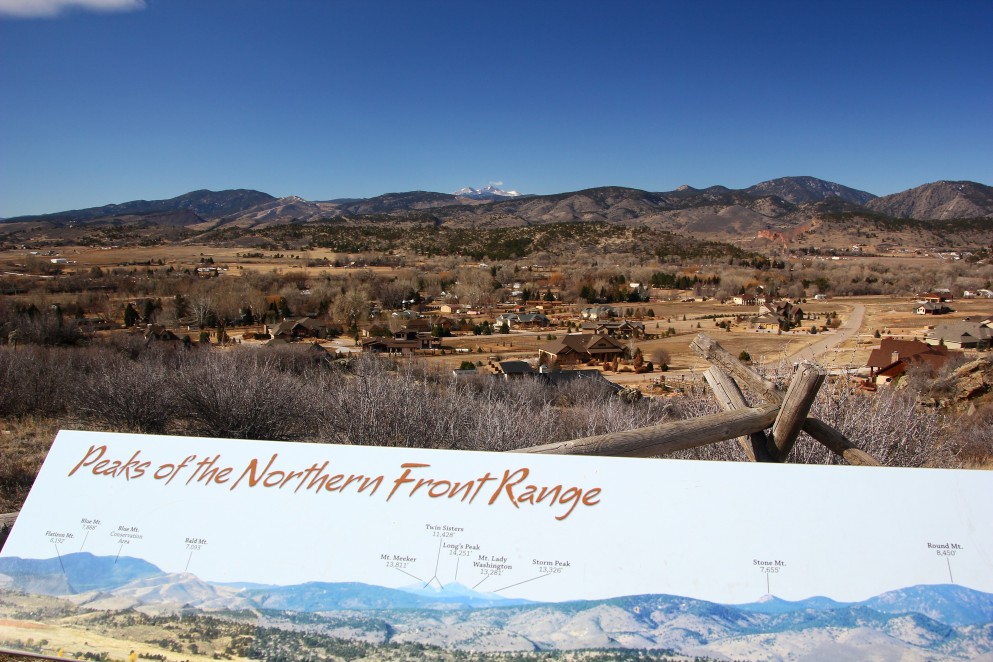 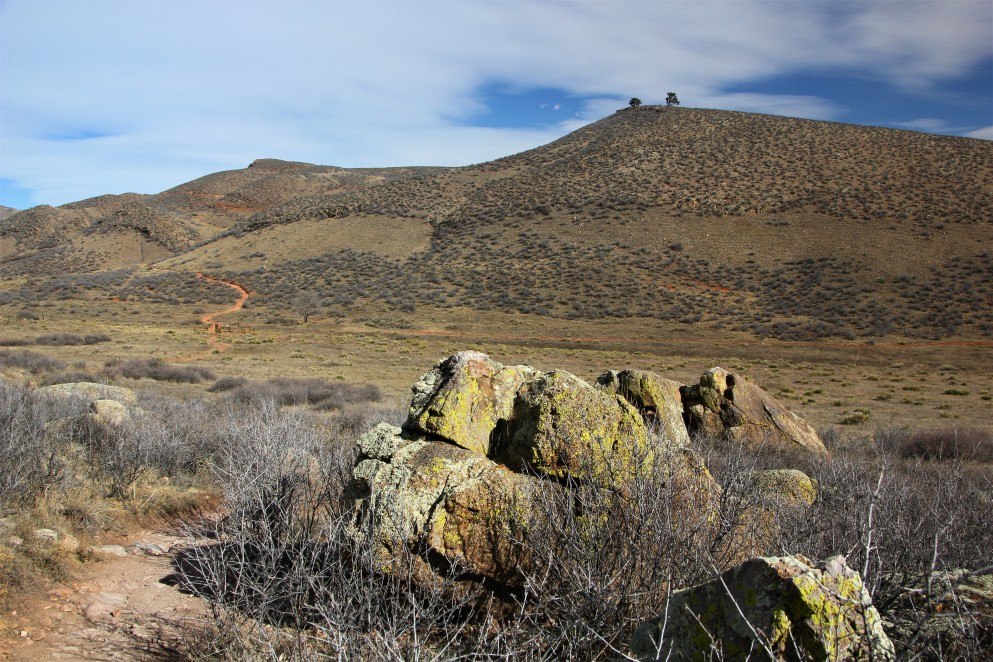 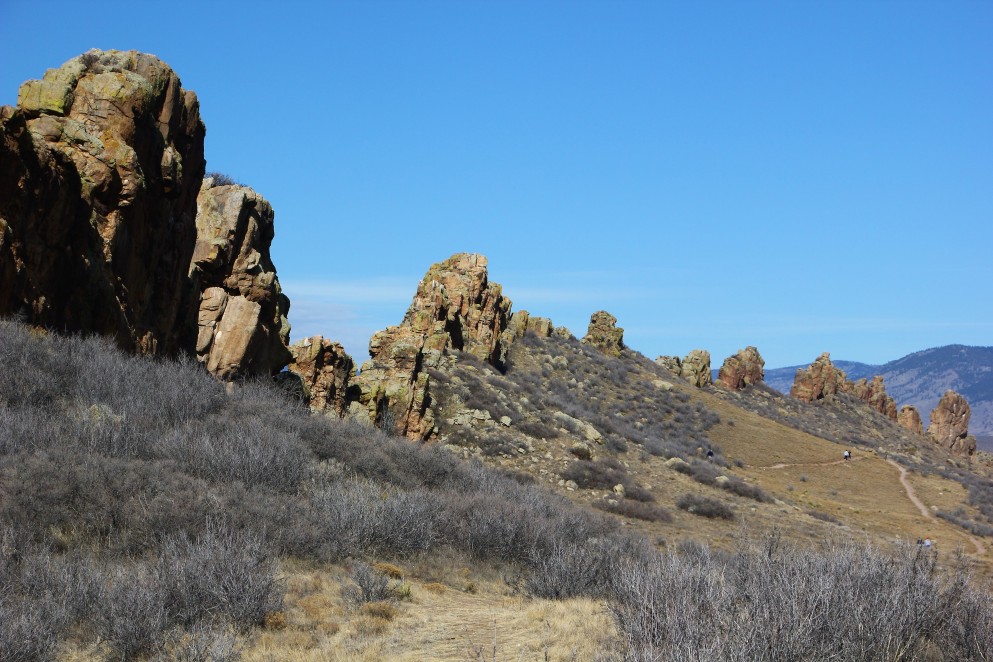 We also got to see where the local rich folk live.

Another nearby hiking spot is the Horsetooth Mountain Open Space, where the mule deer are also quite friendly.

Loveland had its annual Fire and Ice Festival while we were in town.  The setting was a few blocks of downtown Loveland blocked off, with open air vendors and a few large warming tents.  Ice sculptors were working while we were walking around, and fire sculpture artists were displaying their creations (which were particularly appreciated on the very cold night we were there). 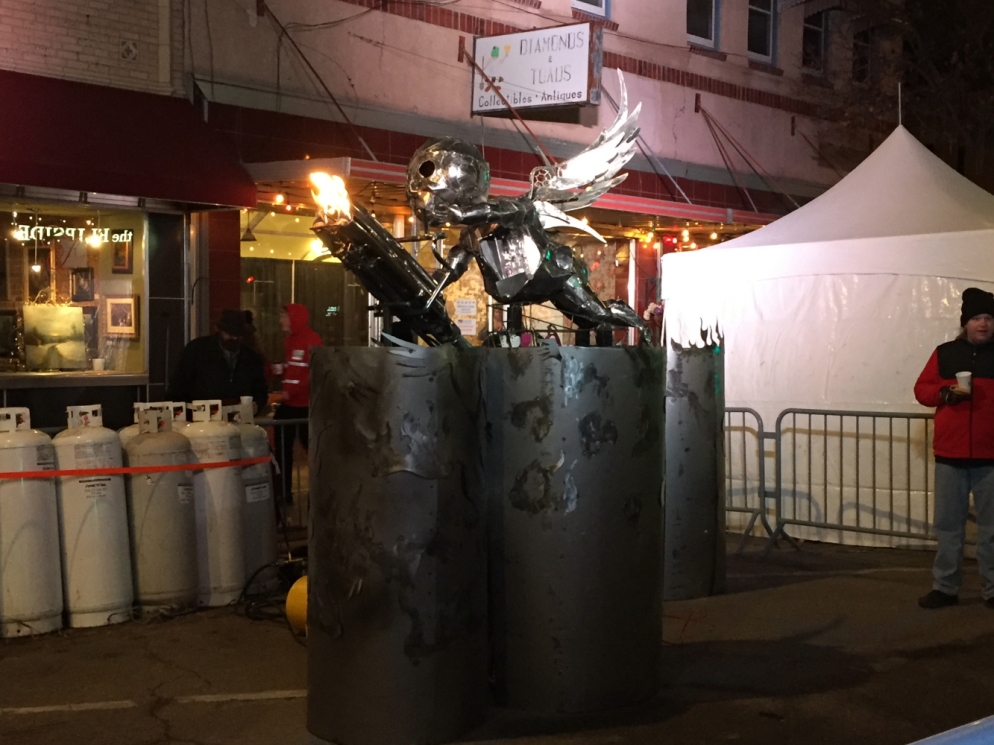 We took a drive to Estes Park, just outside Rocky Mountain National Park.  The drive gave us great views of the mountains.

The town itself was much quieter than on our previous summertime visits.

After our month of housesitting duties were over, we headed back to Texas.  Our first night was spent in Denver’s LoHi district, a very trendy neighborhood just outside of downtown where lots of new bars, restaurants, and breweries are creating a busy weekend nightlife.

The next day, we returned to Texas.  Out in West Texas, you can’t deny the power of wind.  Huge banks of windmills like these, extending as far as you can see, are everywhere.

After another day of driving through the middle of Texas, we returned to the Gulf Coast.  But we will be on the move again soon.  In the meantime, we’ve got more to tell you about our Colorado adventure, and we’ll be posting again soon.  Stay tuned and thanks for stopping by.

3 thoughts on “Our House on the Front Range”