March 1, 2017:  Since you heard from us last, we’ve had three sets of visitors.  We very much enjoyed our time in Playa del Carmen with the Raymonds and then with the Wentzes, but because we are bad documentarians, we have no photographic proof of those visits.  Sorry guys!

We met both sets of our undocumented visitors in Playa del Carmen.  The Raymonds came down from Houston for their first (!) visit to Mexico other than maybe some college crossings of the Texas border, which don’t count.  We didn’t have good beach weather for this visit, as the Caribbean was unusually rough.  But who needs beach?  It was a super fun weekend, filled with lots of (arguably too much) good food and conversation.

The Wentzes joined us from Minnesota for Super Bowl weekend.  It was our second annual Playa Super Bowl Weekend.  There was lots of beach and fun.  We hope that there will be a third and a fourth and…

Michael’s sister Erika and her husband Chad came to Maricasa for a week in late January. We ended up with lots of pictures of their visit, in part because they took a lot of pictures and shared them with us.

On their first day here, Erika and Chad got in a little kayaking. 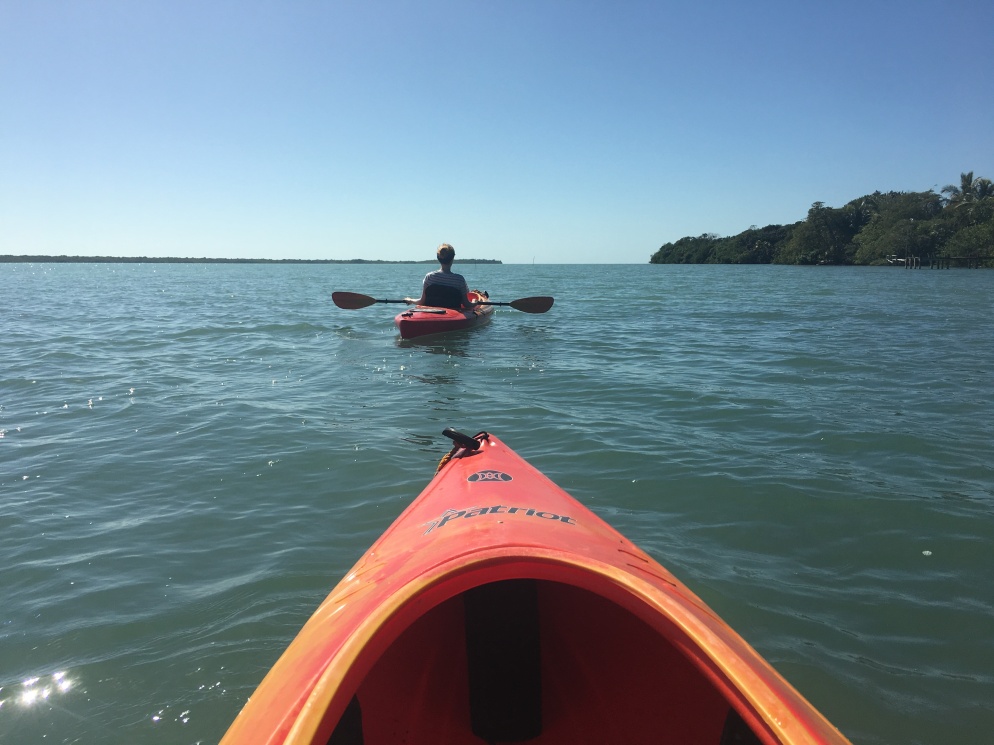 Then there was the ceremonial presentation of coconut water by Pablo, enjoyed by our visitors, and of course by Josh the doberman.

We had lots of adventures during the visit, including a day trip to the nearby town of Bacalar.  Bacalar sits on Laguna Bacalar, a stunningly beautiful freshwater lake with a white sand bottom.  It’s like the Caribbean, minus the salt.

Bacalar was the first city in this part of the country conquered by the Spanish (1543).  The setttlement at Bacalar was subject to repeated destructive pirate attacks during the 17th century, so the Spanish built the Fuerte (Fort) de San Felipe to allow for a permanent settlement to prosper. [click to enlarge]

The treasure being brought out of the country here was not gold or silver, but a tree, known as Logwood or Campeche tree,  from which a textile dye was extracted.  The tree was so valuable that English squatters began illegally logging Spanish territory to the south of here in what eventually became the established colony of British Honduras, now the nation of Belize.  Guatemala still resents this annexation of their territory, and in that country, you will see maps that include the territory of Belize as part of Guatemala.

But we digress.  Back to Bacalar.  We had lunch at La Playita, a delightfully touristy lakefront restaurant with a great dock for swimming. 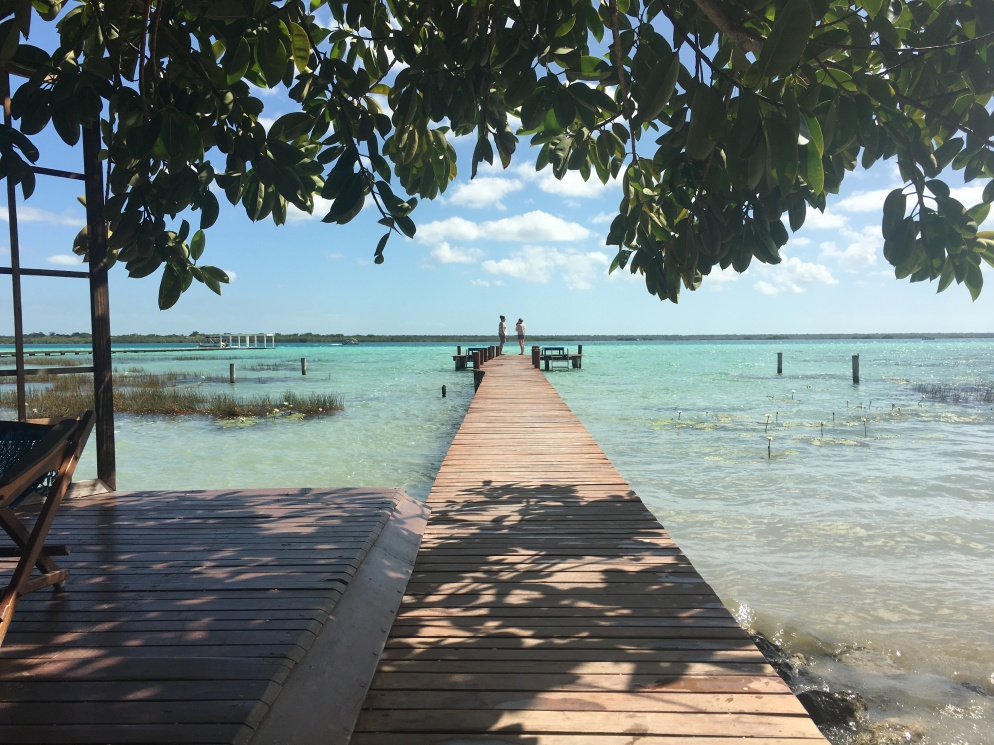 Near the town of Bacalar we visited a channel of water locally referred to as “Los Rápidos” where water flows into the lake.  There was no whitewater as the name might imply, but it was a very nice place to jump in the water and get carried downstream by the moderate current.  We were lucky to be there on a slow tourism day:  [click to enlarge] 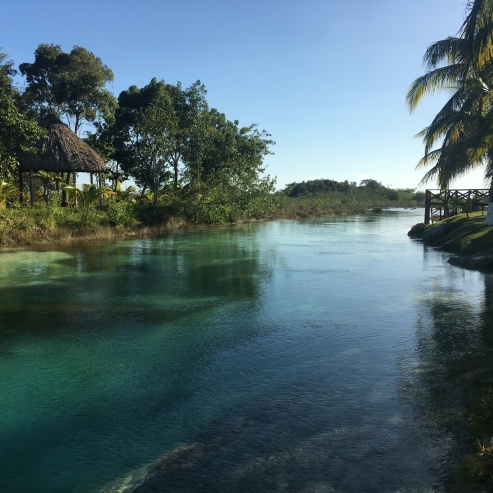 See those rock formations under the water?  Those are living giant stromatolites.  Composed of layers of microorganisms, especially cyanobacteria, they were among the first life forms on Earth.  The living cells deposit minerals forming a base for the next level of growth, much like a coral reef, but solid.  These distinctive life-built rocks provide the oldest fossilized evidence of life on Earth.  They can currently be seen growing in only a few places around the globe, and those in Laguna Bacalar are probably the largest on Earth.

The adventures didn’t stop with giant bacterial colonies.  We also visited Dzibanché and Kinichná, ruin sites that we told you about last year.  (You can also see these sites on our Archaeological Site Map.)  We even got a tour by the same unofficial guide who showed us around last year, occasionally asking Laura “do you remember what I told you last time about . . .”  [9 pics below]

But this time, in addition to the good company, there were baby howler monkeys! [6 pics below]

Until the middle of the 20th century, sap (chicle) was harvested from the chicozapote tree in this region of Mexico, used to make chewing gum.  We haven’t seen it in years, but if you traveled in Mexico in the past, you’ve probably been approached by children selling small packets of gum called “Chicles”.  This outdoor museum tells the history of this industry and shares several gross facts about how much used gum gets scraped off of various public surfaces.  Apparently manufacture of natural chicle gum has resumed locally, though we have been unable to secure a sample to test.

The park also has a small lake inhabited by various lizards. 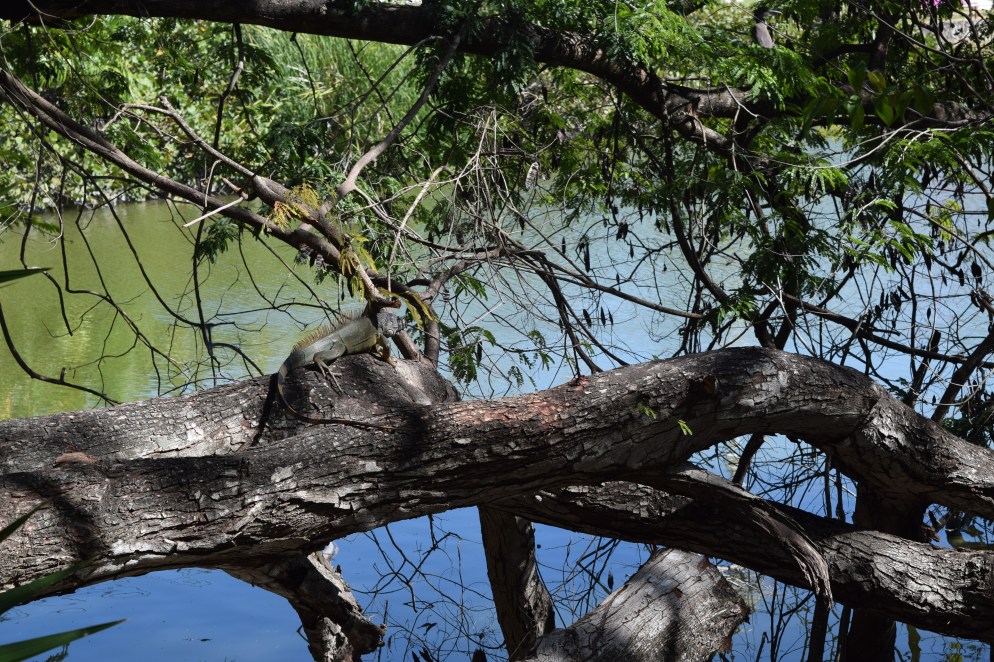 There are supposed to be crocodiles there too, but we’ve been there a couple of times and haven’t seen any.  And of course no park would be complete without a shrine to the Virgin of Guadalupe.

The four of us also had some adventures with our friends Luis and Ana.  The first involved a trip to Tamalkab, the island in the bay near Maricasa.  Thirteen humans piled into a boat.

We brought along tables, chairs, coolers and enough ceviche and other food for 20 people and went to the spot on Tamalkab that we had kayed to previously. 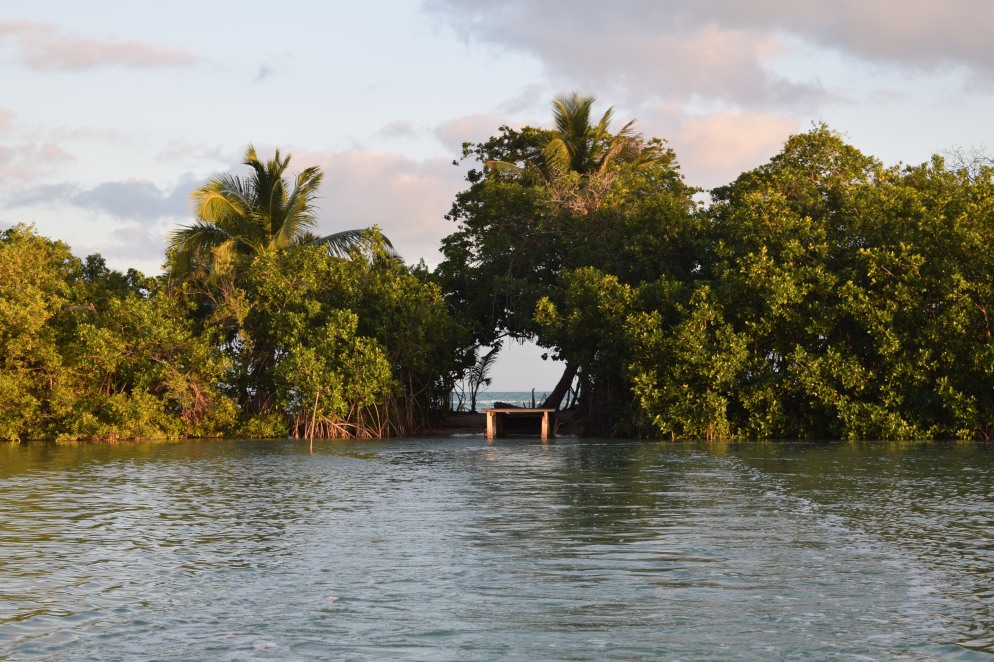 We had an amazing picnic.

And we saw some things left behind by prior inhabitants of the island.

On Erika and Chad’s last night in town we were honored to be invited to Yatzil’s 5th birthday party.  Yatzil is Ana and Luis’s daughter.

There was an incredible taco bar with a half dozen different taco fillings, hand-made tortillas and sides of rice and nopal.  Delicious!! 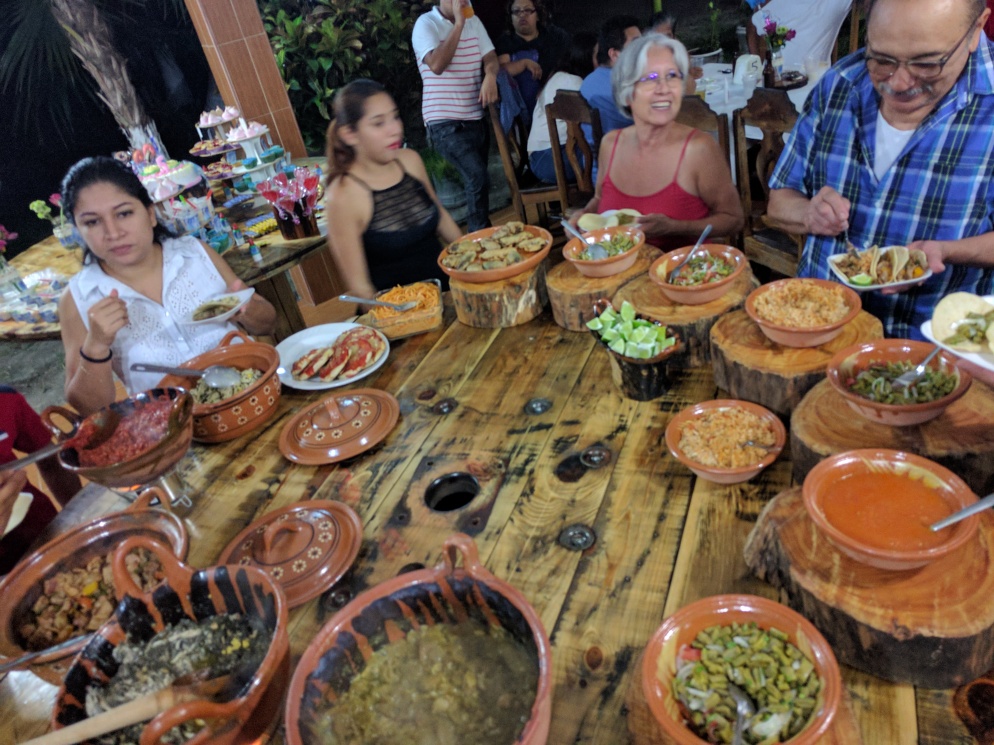 There were lots of different drinks, including horchata and a delicious cocktail of coconut water, vodka and hierbabuena.

There was also a ridiculous dessert buffet.  Did we mention that she’s an only child?  The party was, of course, Frozen themed, much like a significant portion of Yatzil’s current wardrobe and playthings.  Disney rules this planet’s children. [click to enlarge]:

Of course, there was a piñata. 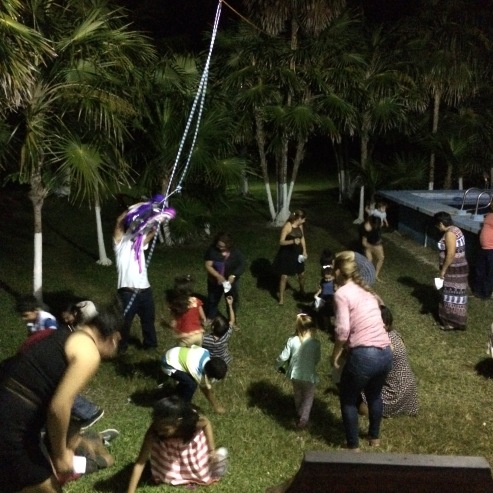 The piñata hangs from a pulley, and Luis took great delight in raising and lowering it to frustrate the children’s attempts at making good contact.  Yatzil took the first swings, and then passed the stick on to an orderly progression from youngest to oldest girl, then youngest to oldest boy.  While the kids took their swings, everyone sang the piñata song, and at the end of the verse, the kid knew it was time to stop and pass off the stick to the next kid.  A well practiced cultural tradition.

It was a great week that went altogether too fast.

We’re so thankful to all of our visitors for making the journey.  It meant the world to us!

4 thoughts on “Our House in Calderitas, Visitor Edition”