May 4, 2017: Who knew that Florida was so beautiful?  Other than the 20 million people who live there, of course.  Or the 110 million tourists who visit each year.  Well, maybe we shouldn’t have been so surprised by what we found.  But we were. 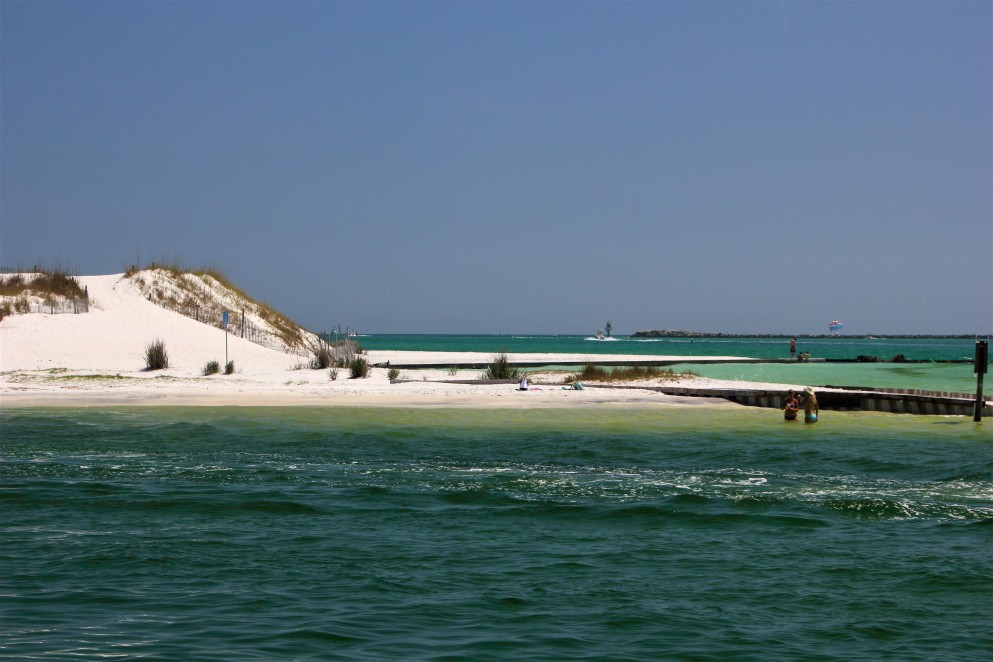 We have previously been to Orlando, Miami, and Key West.  We aren’t in a hurry to revisit any of these places any time soon.  So perhaps we expected the Gulf coast of Florida to be fairly uninteresting.  We were pleasantly surprised.

The Emerald Coast, AKA the Redneck Riviera, refers to the Florida panhandle’s gulf coast from around Panama City Beach all to way west to about Fort Morgan, Alabama, which we had just left.  The water at Fort Morgan was OK, but as we traveled east, it quickly improved, turning a beautiful emerald green.  By the time we got to Florida, it was also amazingly clear. 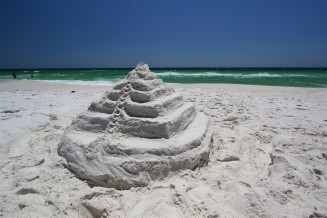 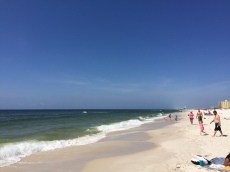 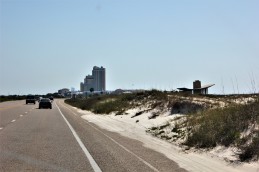 We made a short stop in Destin.  You’ll have to trust us when we say that there’s a giant tourist complex here.  We always happened to have the camera pointed the other direction for some reason.  Oh, right, this is the reason:  [click to enlarge] 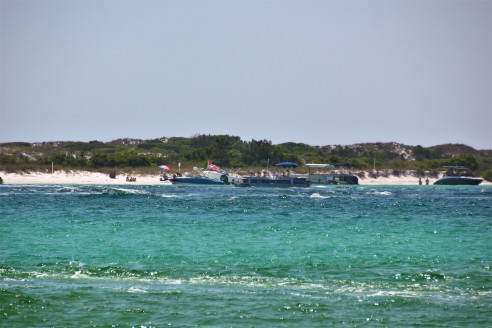 Its shallow emerald waters make it an idyllic spot.  There’s a party boat scene that makes Lake Minnetonka’s Big Island look like a kiddie pool.  Lots of people rent pontoons to tool around these waters.  LOTS of people. 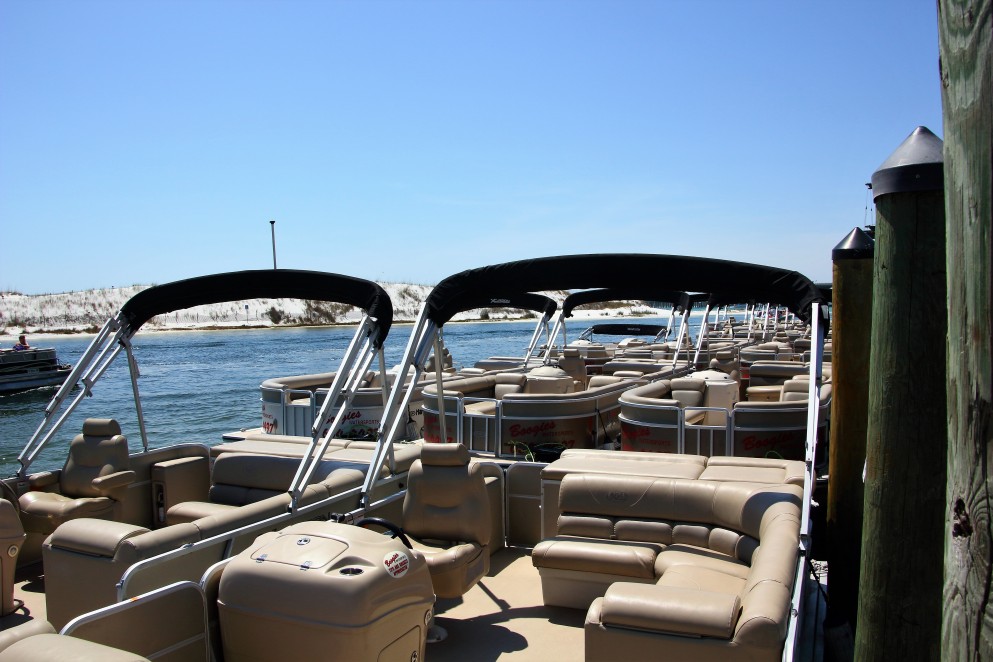 We witnessed an inexperienced pontoon driver dump a dock worker into the water, narrowly avoiding a much more serious situation.  Perhaps there should be a little more instruction before turning people loose with these things.

There are tons of great blue herons right on the docks and piers hoping to take advantage of the daily catch.  [click to enlarge] 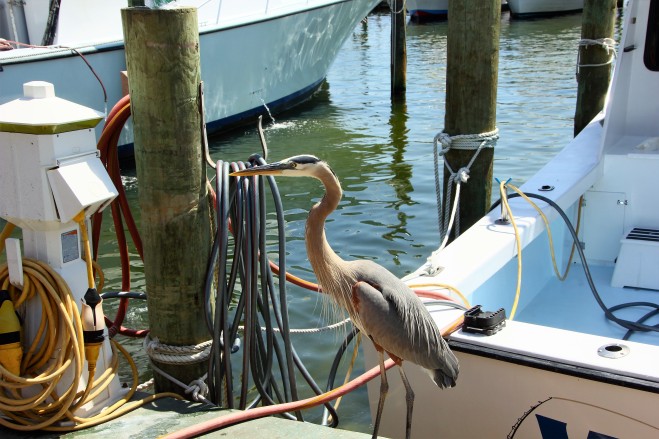 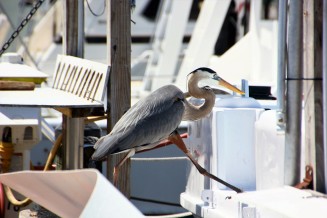 This beautiful beach stretches for miles.  We had no idea. 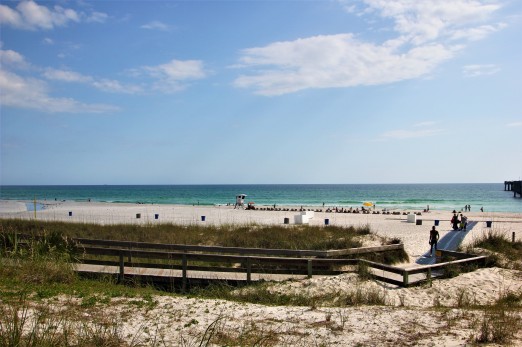 We decided to stop in the town of Apalachicola.  It’s located at the mouth of the Apalachicola River, where it flows into Apalachicola Bay.  The bay is shallow and protected by barrier islands, so no surf and no white sandy beach, but it was a really beautiful spot.

The town itself was surprisingly interesting.

Industry here seems to presently center around seafood and tourism.  There are still multiple riverfront seafood processing plants in town, readily identifiable by the giant piles of oyster shells outside.  Before the railroads came along, this was also a busy port shipping local agricultural products (cotton, then lumber after the Civil War, among others)

There is also plenty of shrimping in the bay. 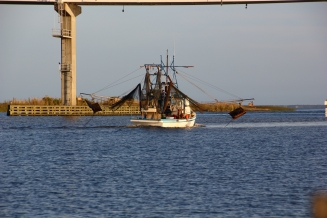 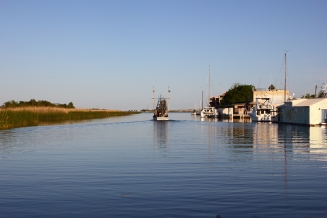 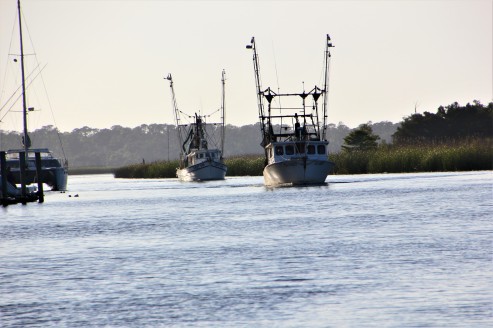 We arrived in town at night, and found the place to be almost completely dead.  However, going out the next day, we found a really nice, active little touristy town.  No T-shirt shops or the like, just well preserved old buildings with with shops selling arts and crafts and nautical kitsch, some nice little restaurants, and a even a good brewery, all in a small, walkable town center on the water.  We visited The Apalachicola Maritime Museum.  In addition to the displays and artifacts that you would see in a typical museum, this one is doing things like building and refurbishing wooden boats, and guiding a variety of tours on the water.  We took a ride that was part history tour, part sunset watching.  Captain Richard was our host.

We’ll let him speak for himself.  Watch this one, it’s worth it:

First we went upriver, taking in the sites of town and learning some local history (and gossip).  This riverfront building was revived from ruins and converted to a hotel and market:

There are folks with money here, some of them renting dock space along the river. 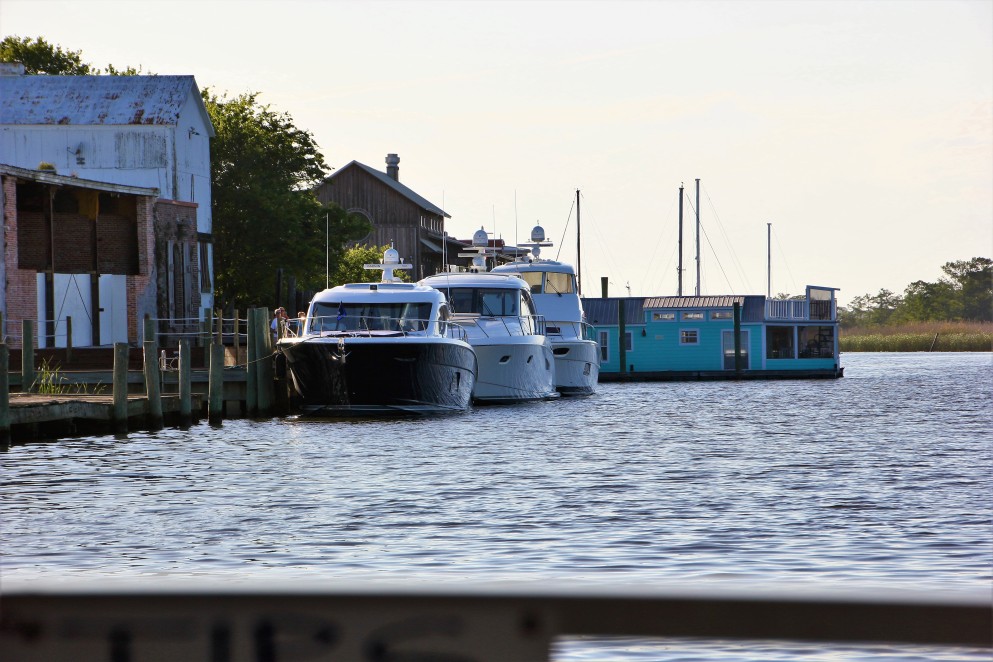 Some more scenes along the river:  [click to enlarge] 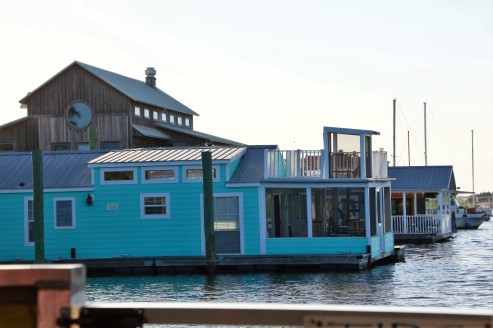 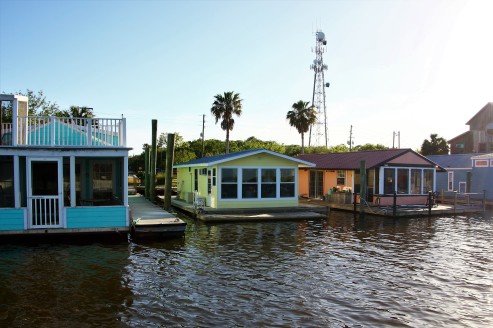 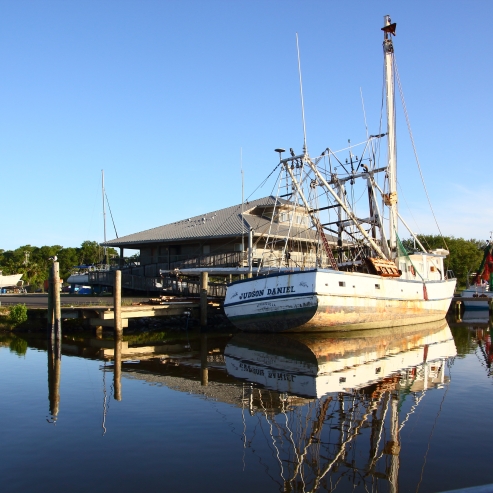 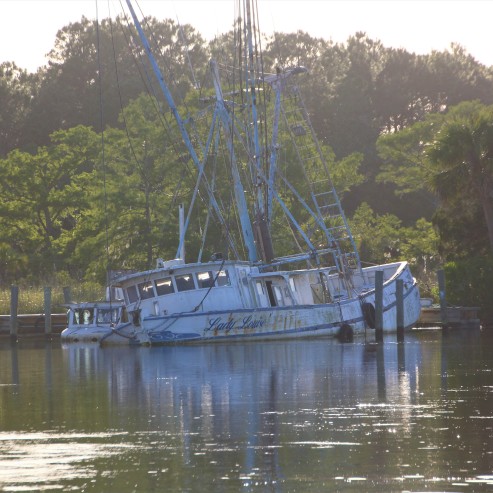 Hey look, you can see our house from here! (We spent a couple of nights parked at the marina at the very mouth of the river.)

Then we headed out onto the Bay and watched the sun go down. 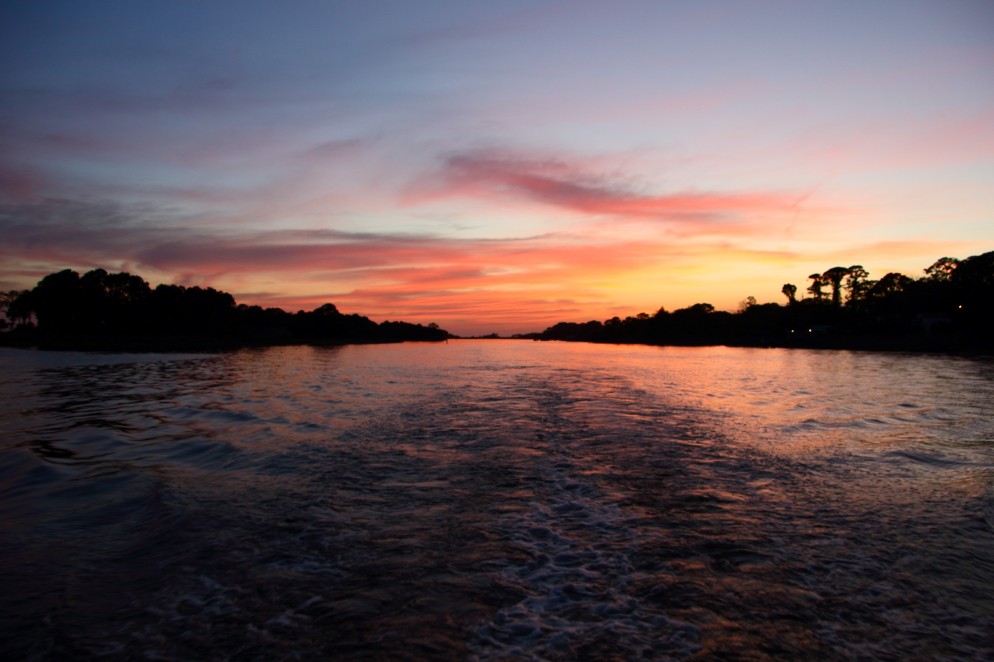 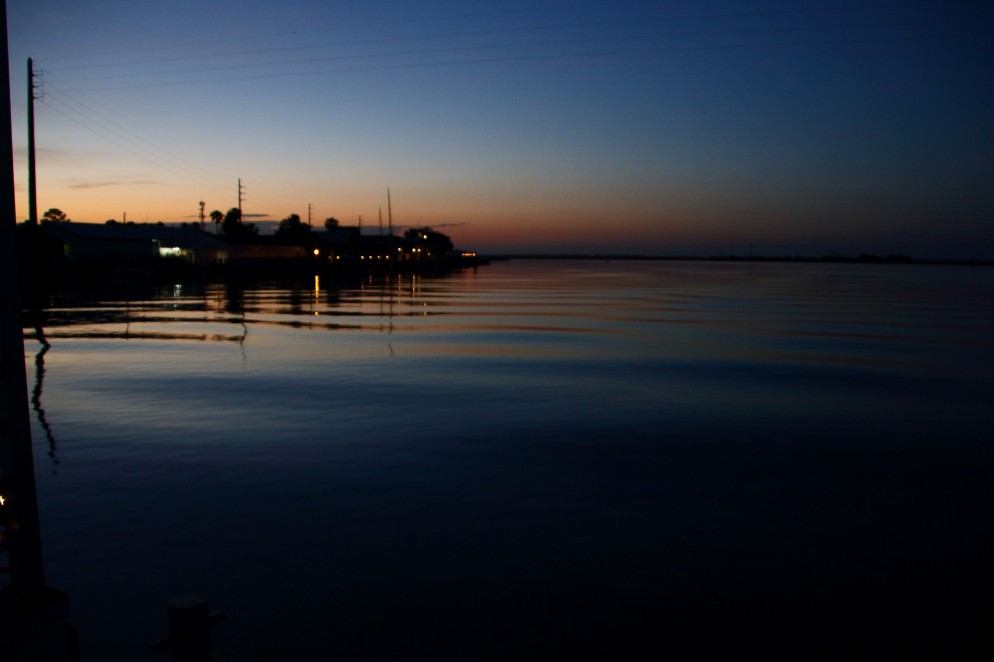 From Apalachicola, we continued our travels east, crossing one of the many long bridges in this area connecting bits of land.  Well, there’s land up there somewhere. 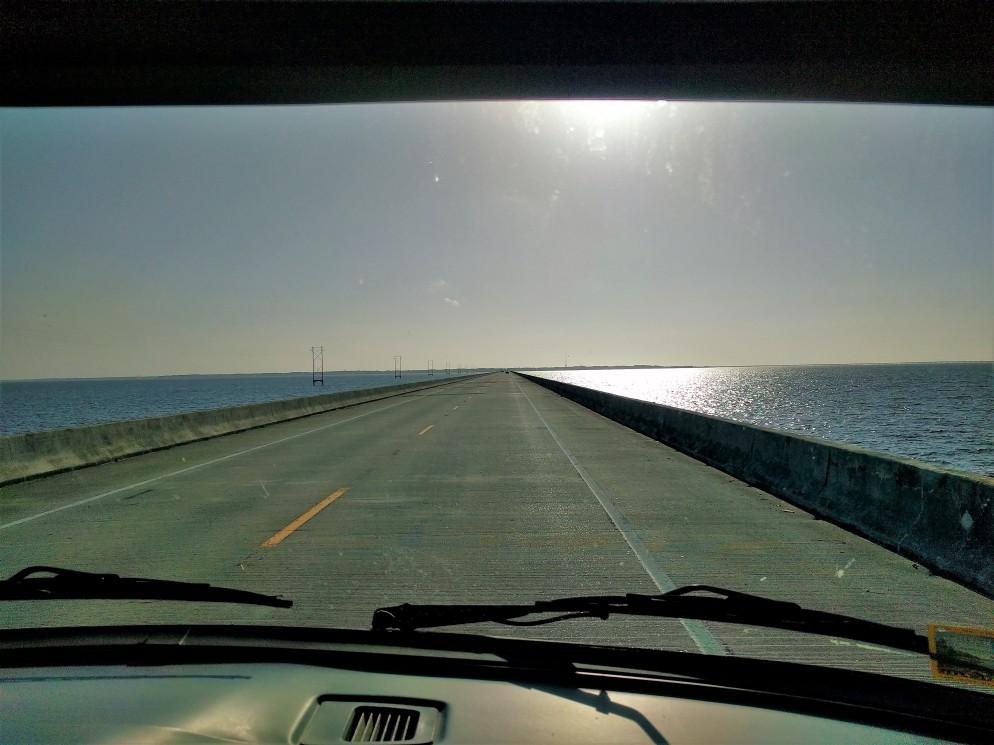 We ended up a bit inland at the Suwannee River State Park.  There were a few too many mosquitoes, but we got in some scenic hiking.  That’s an owl in the last picture.  Unfortunately, we only had phone cameras along.  [click to enlarge]

Our final stop in Florida was St. Augustine, billed as the oldest city in America.  It was founded by the Spanish in 1565.  That’s pretty old.

After repeated attacks by pirates and enemy states in the 1500s and early 1600s, the Spanish built Castillo de San Marcos to defend the city, completing it in 1695.  It is the oldest masonry fort in the US.

Something new we have learned in our recent travels is the degree to which the European powers fought each other for control of this region.  Once this fort was built, however, Spain was in firm control from this point south.  Multiple British raids from Georgia and South Carolina colonies failed to take St. Augustine.  In fact, the British canons never managed to do any real damage to the fort.  The British did manage to acquire St. Augustine in 1763, but did so by treaty.   They kept control of the fort, as well as the rest of Florida, through the American Revolution, when the fort was used to hold rebel prisoners.  The 1783 Treaty of Paris, which ended the American Revolution, also granted Florida back to Spain.  The US acquired Florida from Spain in 1821.

It’s good to have a massive masonry fort when there are pirates sailing just off shore:

Entry to the fort is possible only by crossing this well-defended moat and drawbridge.

The interior walls of the fort were covered in a type of plaster.  Generations of soldiers carved drawings into the walls, many of them depicting ships.

Some of the interior is mocked up to show daily life at the fort.  During British control, officers utilized rooms like this.  See those bunkbeds?  That’s bedding for four adults, not two.  Close quarters. 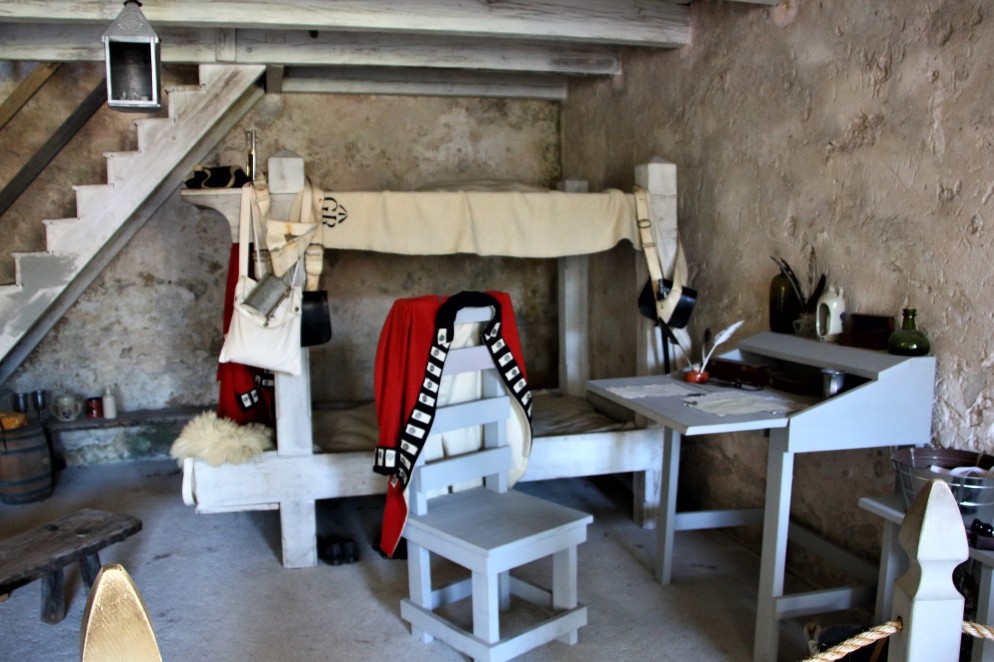 Views from the top of the fort.  [click to enlarge] 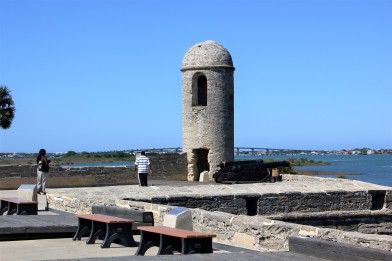 There are lots of cannons at this site, some as old as 1700s.  Who knew that cannons could be so pretty?

After the fort, we strolled around town a bit.  There are lots of nice old preserved buildings, but the businesses were decidedly mass-touristy.

One problem we have encountered in some of the interesting and beautiful places we have traveled over the last 18 months is that their primary customers are on a rare and brief vacation, and so don’t care as much how expensive things are.  Merchants wisely take advantage of this fact, and things are unreasonably expensive.  This makes it a little challenging to visit these places on a regular daily budget.  Luckily, we carry a bedroom, pantry, refrigerator, and kitchen around with us, giving us a lot of options. 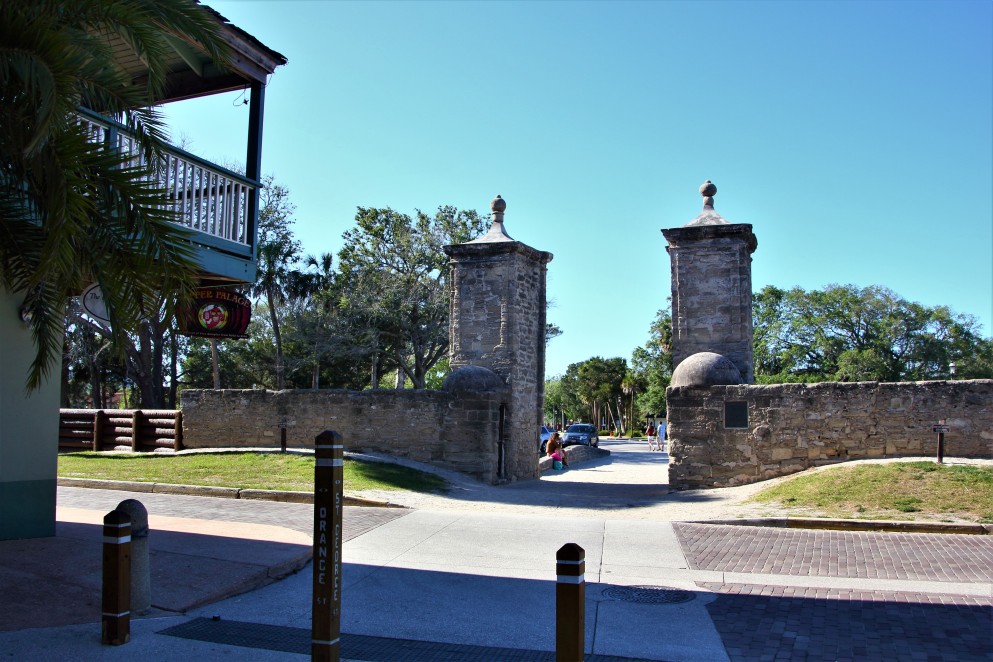 St. Augustine is pretty and historic and we might have been inclined to spend more than an afternoon here.  However, the town is among increasing numbers of places that are pretty anti-RV.  This means that you can’t park anywhere overnight legally other than RV parks.  This also means (in our experience, including here) that such policies result in outrageously expensive RV parks.  No thanks.

So, onward ho!  That’s it for Florida, but there’s plenty of the Southeast to come.  See you next time.

One thought on “Our House in Florida”