We chopped away the roots trying to grow and keep us in New Orleans, and rolled east to Alabama to meet up with a friend we hadn’t seen in 24 years.

Heading east from New Orleans, we both were in completely new territory.  Neither of us have explored the South, east of New Orleans (other than Miami to Key West).

We made a stop in Biloxi, Mississippi.  The beaches are nice, but because of barrier islands off shore, the water is gross.  Some of you Texans may be wondering if the water is worse than Galveston.  Yes, way worse.

There are lots of casinos in Biloxi, which we knew about and avoided.  We also happened to arrive in Biloxi on the day of the Gulf Coast Oyster Cook-off & Festival.  We can’t seem to go anywhere without running into a festival!

But the town was a lot more interesting than we expected.  With the assistance of Google, we found the The Wayward Kraken and stopped for lunch.  They call themselves the “Gulf Coast’s one and only gaming gastropub.”  We call it Nerd Nirvana. 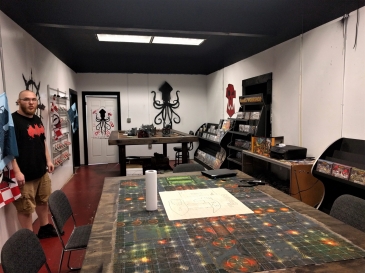 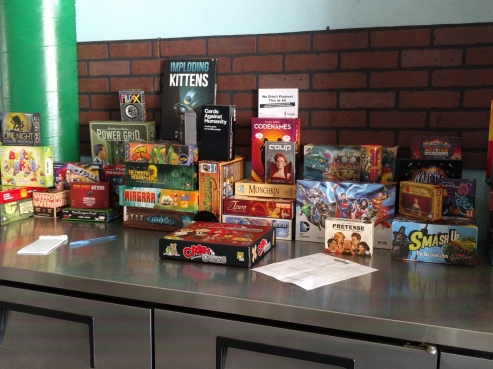 The Kraken features a variety of board games, a Harry Potter-themed reading room, retro console games on large screens, and a war room for playing games like D&D and Warhammer (one of the owners also creates and sells high quality painted miniatures).   Their geeky credentials run deep.  They also have really good food and a great selection of Mississippi-brewed beers.

On the recommendation of the bartender at the Kraken, we decided to cross the bridge from Biloxi into Ocean Springs, Mississippi for the night.  It was charming (though this restaurant served us a pretty dissapointing burger).

From there we headed for the real reason we were stopping in this part of the country, Trent.  The last time we saw him, we were all undergrads at the University of Houston.  We lost track a bit and hadn’t seen each other since 1993.

But no matter, some friendships endure.  Trent gave the van a home in his driveway in Fort Morgan, Alabama.

It’s just yards from this beach. 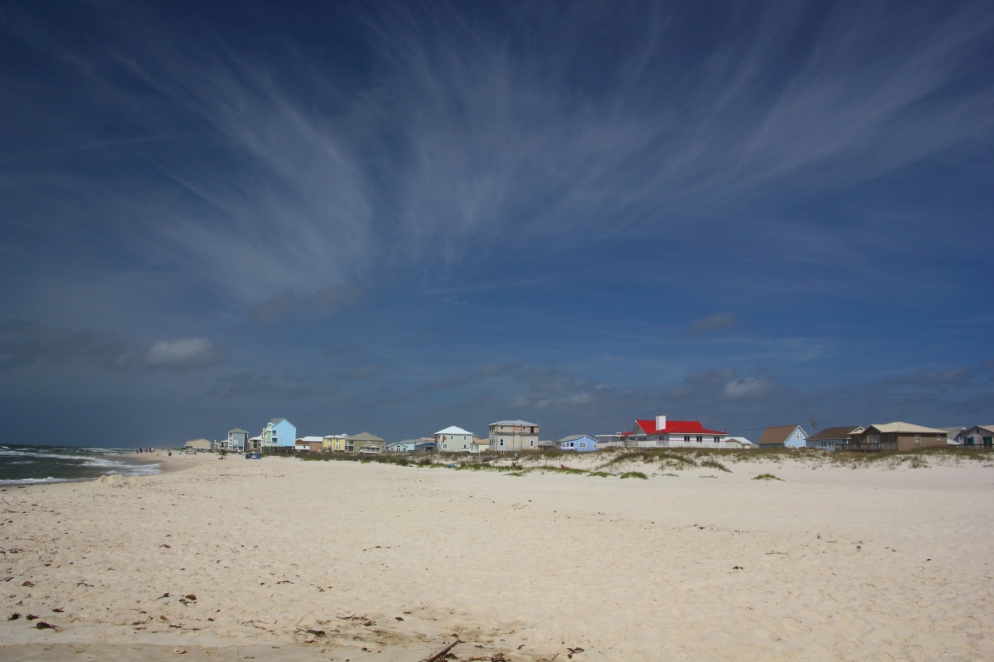 This community is full of homes that are mostly vacation rentals, with a few year-round residents.  It’s a great beach with white sugary sand.  The water is not as good as it gets, but is a lot better than it was at Biloxi.  We also saw some interesting critters on our beach stroll.  [click to enlarge] 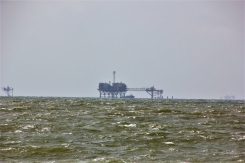 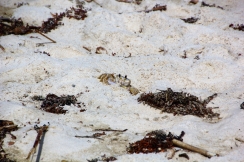 We hung out at Trent’s (and friends’) annual crawfish boil on Easter. 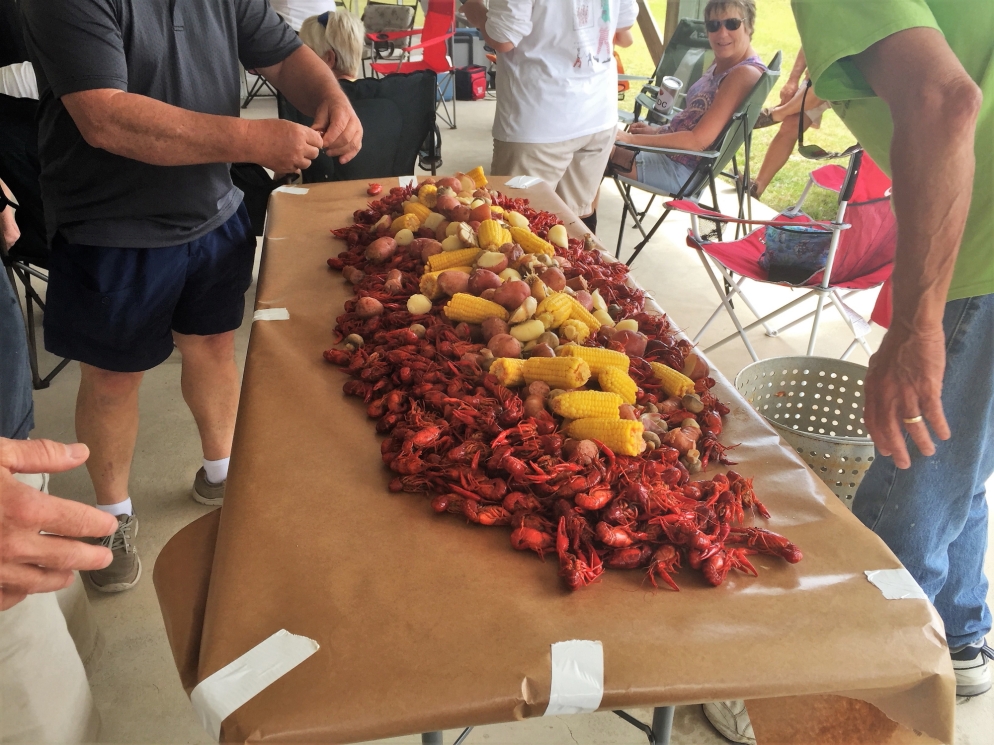 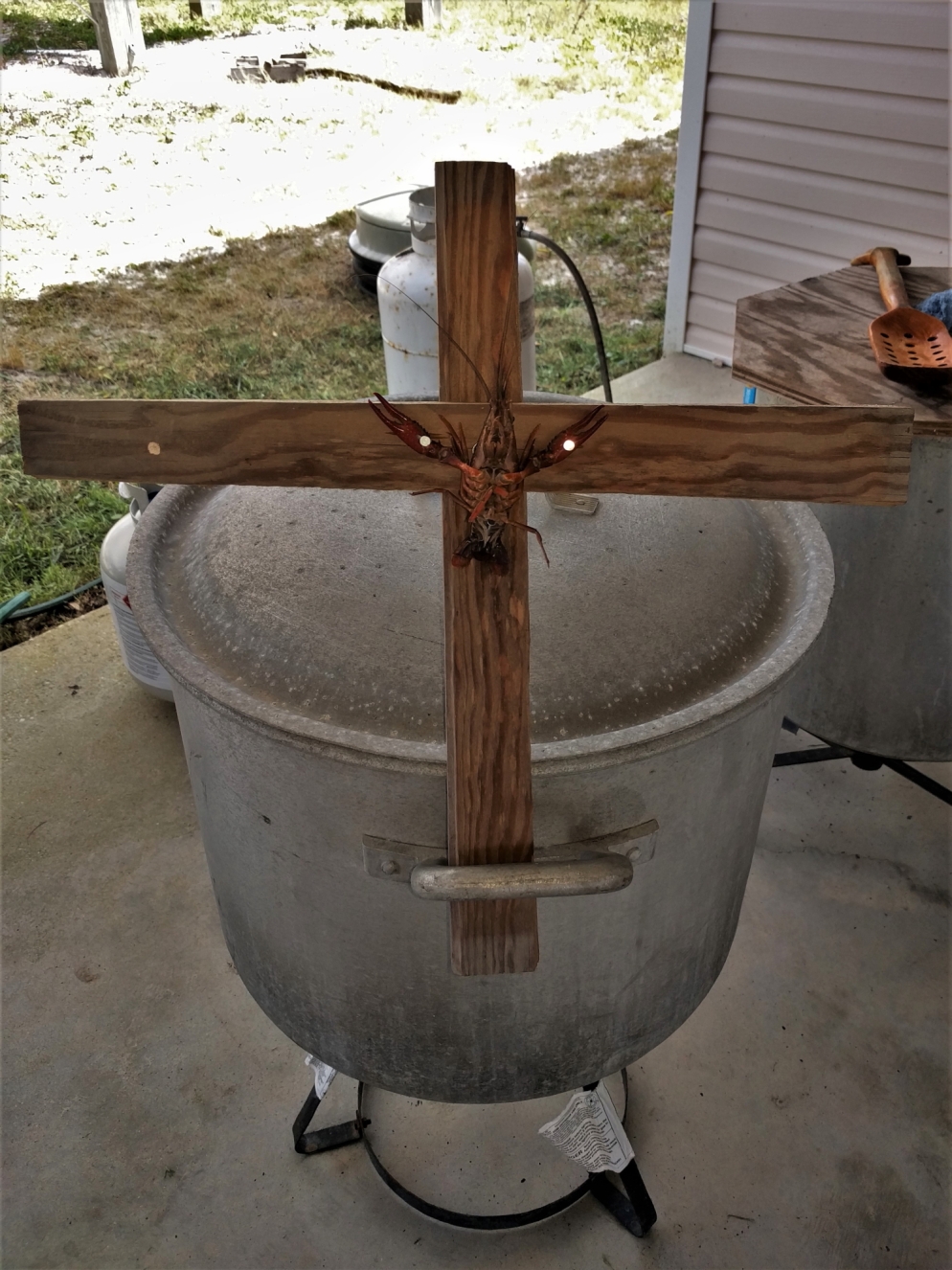 We took in a little local history at Fort Morgan.  This fort was constructed starting in 1819 to replace a previous timber and earth fort thrown up in 1813 to guard against British attack during the War of 1812.  Fort Morgan was attacked by Union forces near the end of the Civil War and heavily damaged.  It was utilized for various military defense purposes through July of 1944.  [click to enlarge] 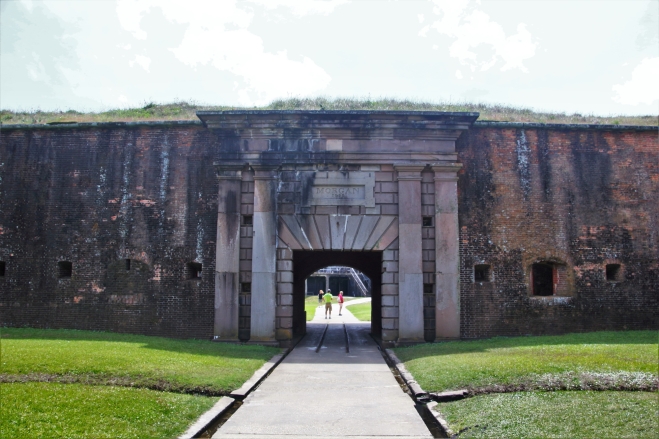 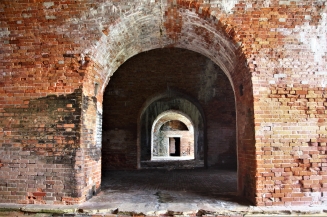 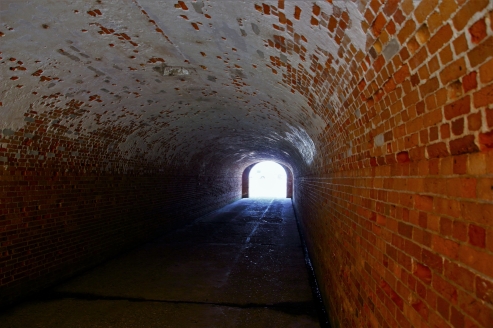 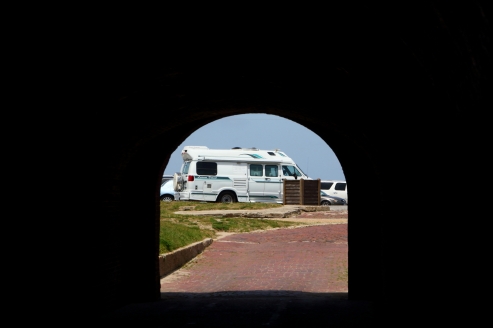 Back at Trent’s place, the home office is complete with snuggly assistants.  Meet Albert.  We didn’t get a pic of his coworker Darby. 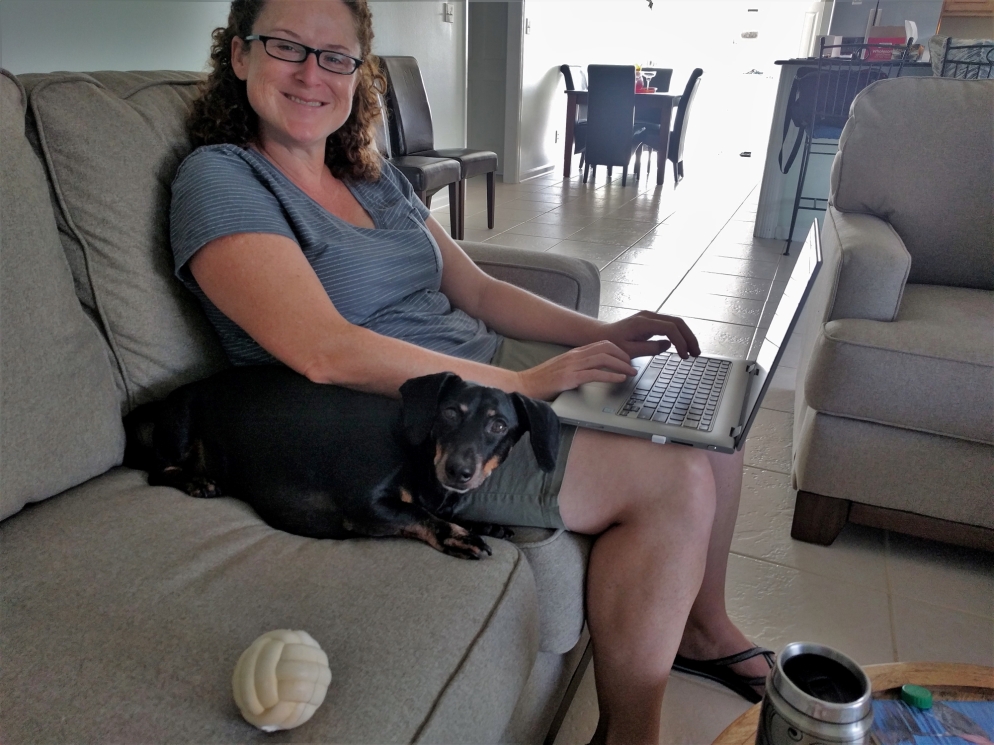 We did a little grocery shopping in Gulf Shores.  Boiled peanuts are big in this part of America.  We even saw them for sale hot and fresh at a Circle K (convenience store). 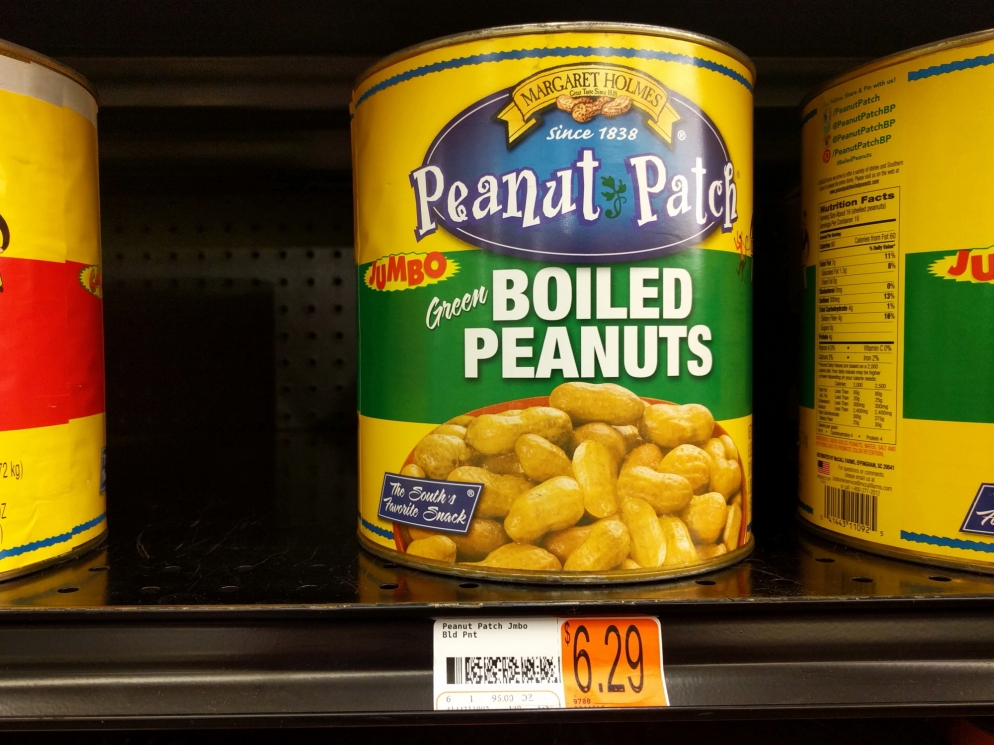 This is the view from the deck at Tacky Jack’s at the Fort Morgan marina.  Trent ended up here working in response to the Deepwater Horizon disaster.   It’s easy to see why he stayed. 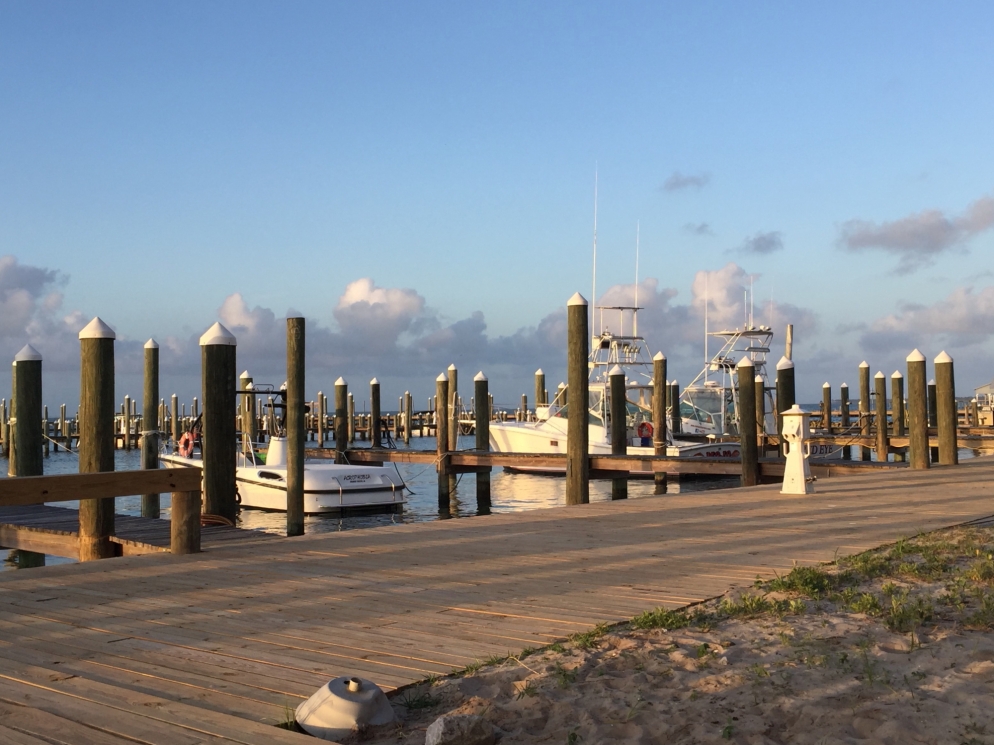 Gulf Shores, Alabama is the nearest sizeable town.  It’s about 20 miles and a whole world away from Fort Morgan.  It’s the high rise condo, souvenir trinket store kind of beach town.  It’s probably fun, but we kept on trucking. 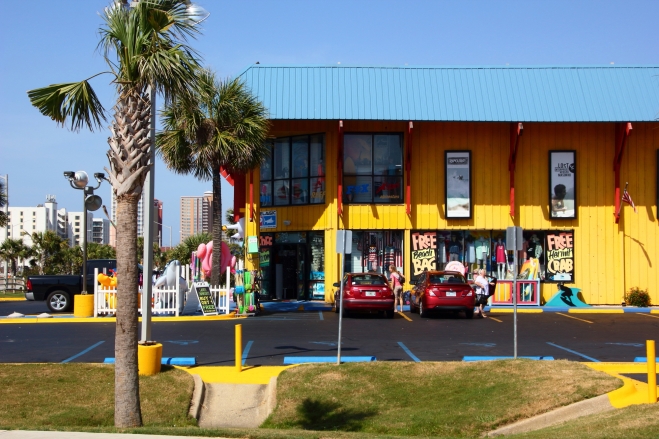 Despite the long delay, it was amazingly easy to pick up our old friendships like we never parted.  And none of us has aged a day!  Amazing.  But now our exploration of the Southeast continues.  Stay tuned and thanks for stopping by.

5 thoughts on “Our House in Alabama”