December 12, 2016:  Rounding out our tour of the western U.S., we made our way back to Texas through Nevada, Arizona, and New Mexico.

We had some work to do, and wanted find a place to stop for a few days and rest, work, and partake of some civilization.  Las Vegas was handy, so there we went.

Before we embarked on this adventure in late 2015, many of you insisted that we should see Lost in America.  For the uninitiated, it’s a 1985 Albert Brooks movie.  A Los Angeles yuppie couple quits their jobs, sells everything, and buys a Winnebago.  Hmm . . .   What message were our friends sending us?  We didn’t actually watch the movie until our adventure was well underway.  Turns out, they were promptly forced back to their former lives after the wife lost all their money at the roulette wheel on their first night on the road (in Las Vegas).  Right back into soul crushing big city corporate office work.  Some friends we have!

Our Las Vegas experience wasn’t so dramatic.  We ended up spending 5 nights at the Las Vegas RV Resort, which we really liked.  Then we left.  Pocketbooks intact.  (mostly)

We hit Lotus of Siam, an excellent Thai restaurant in a not-so-nice looking strip mall.  Bourdain and Zimmern have featured it on their shows and at the urging of friends, we decided to check it out.  We are glad we did.  They had some unusual dishes, including lots of jackfruit, something we had not previously tasted. 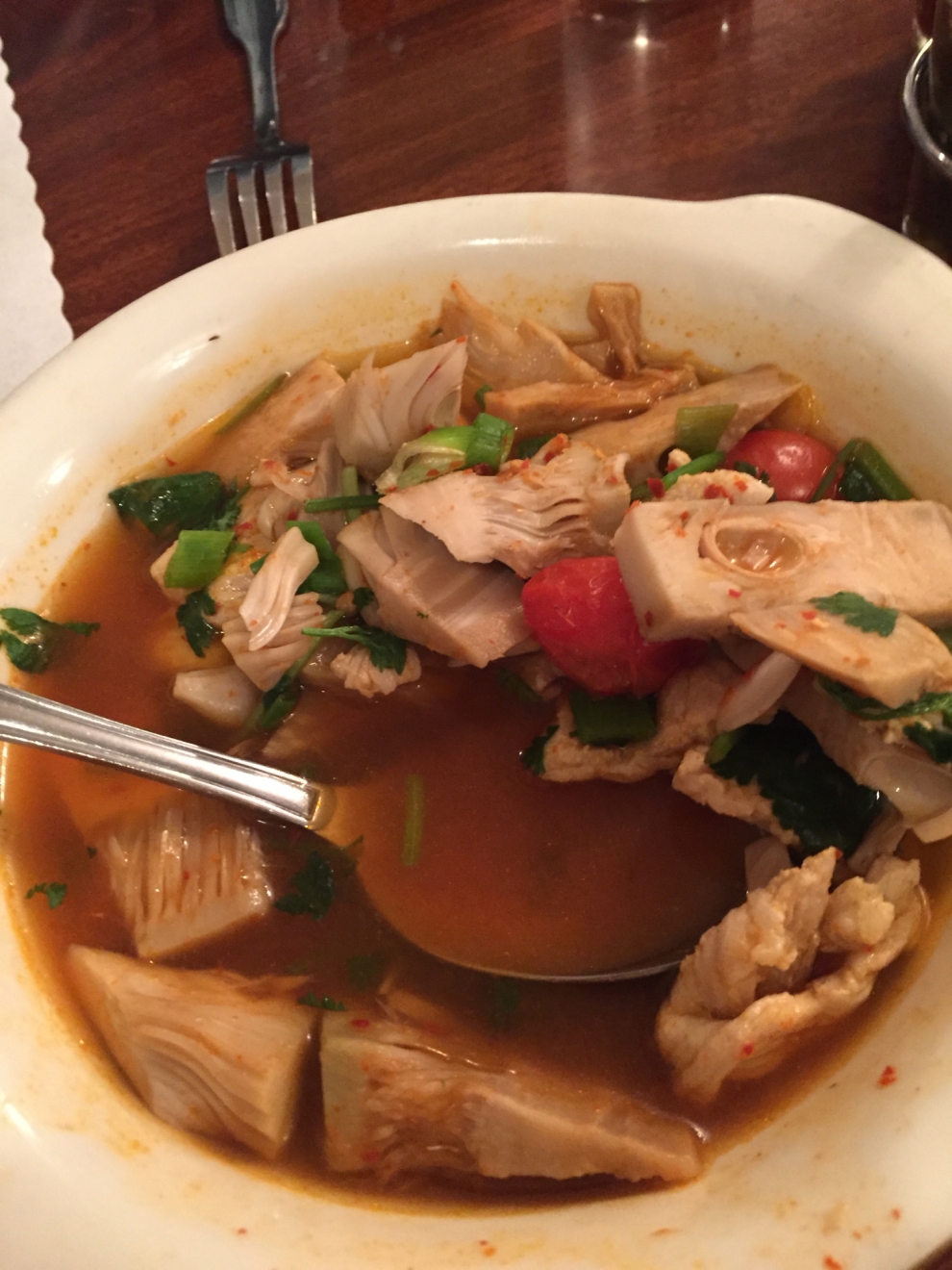 We went to the Strip on two of the five nights, the first being Halloween.  The crowd was disappointingly unconstumed.  Pretty much the only people we saw dressed up were working for tips.  Spoiler alert:  that’s not really Venice (or Paris).  [click to enlarge] 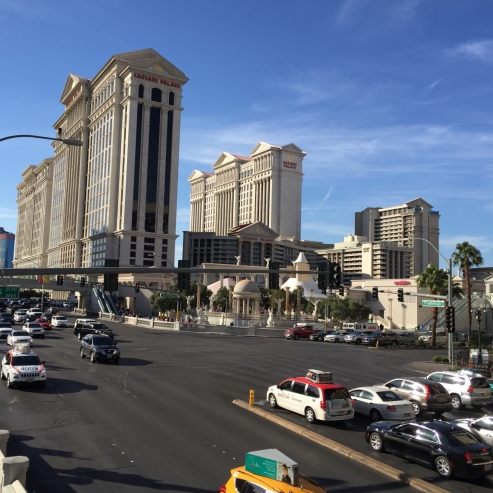 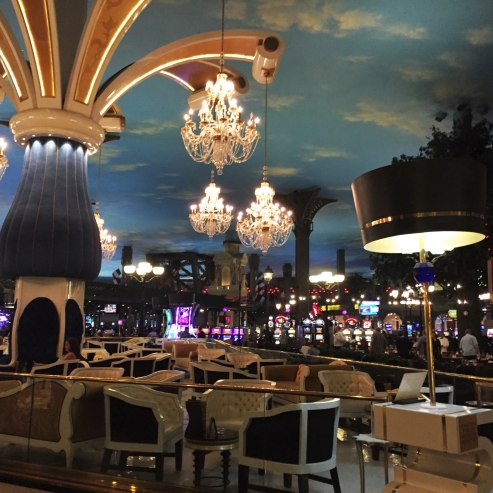 The second night we went out was also Game 7 of the World Series.  Crowds were into the game, so that made it fun.   On the whole, Vegas is definitely not our style.

Leaving Las Vegas, we drove past Lake Mead and Hoover Dam.  The dam once carried the highway over the Colorado River, but a new bridge, opened in 2010, now bypasses the dam.  Despite the appearance of the pictures in this article, in the eastbound lanes at least, we couldn’t see the dam at all. [click to enlarge]

We drove to Flagstaff, Arizona for lunch.  Flagstaff, at 6,910 ft (2100 m) is an attractive tourist town surrounded by ponderosa pine forest.  You’ll have to take our word for it, though.  We didn’t take any pictures.

Driving south toward Phoenix, we encountered a beautiful sunset:  [click to enlarge] 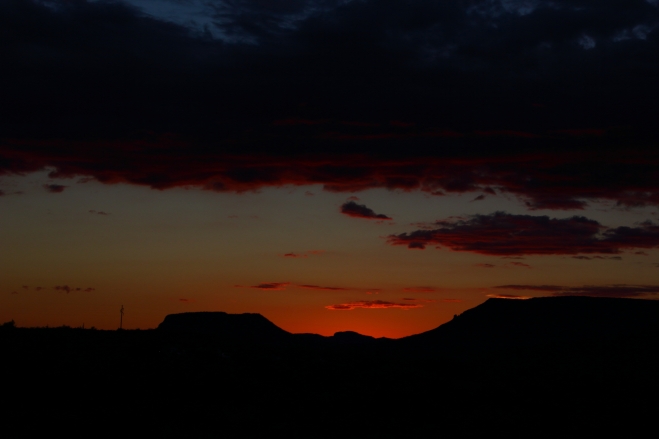 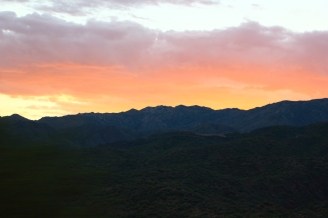 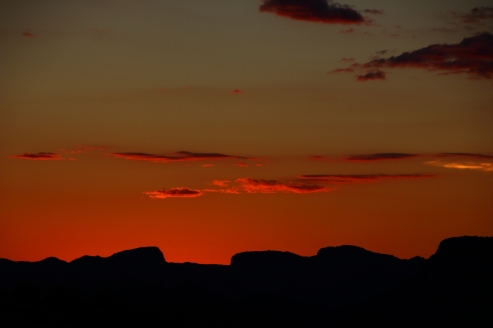 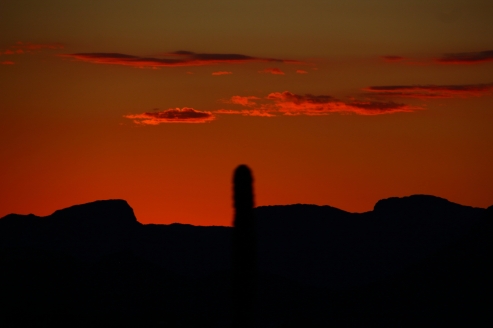 Frank Lloyd Wright adopted Taliesin West as his winter “camp” in 1937, when he was 70.  He wintered there every year until his death in 1959 (at age 91).  Initially, the Wrights, their architectural students and entourage literally camped in the desert in canvas tents.  Once buildings were constructed some three years later, none of them had windows or full walls and were open to the desert’s sand, insects and other creatures.  It took 10 years, but eventually Mrs. Wright convinced Mr. Wright that a more refined existence, including windows, was warranted.  Yes, Wright held out for 10 years before consenting to windows.

In this office, Wright drew the plans for the Guggenheim Museum in New York. [click to enlarge]

Wright developed Taliesin West at a time when he was not flush with cash.  At Taliesin in Wisconsin, the grounds are full of expensive Chinese and Japanese works of art.  Here at Taliesin West, such artistic influence is still displayed, utilizing bargain basement pieces.  Wright bought these works, in fragments, in San Francisco.  One of his students’ early “projects” was to glue them back together. 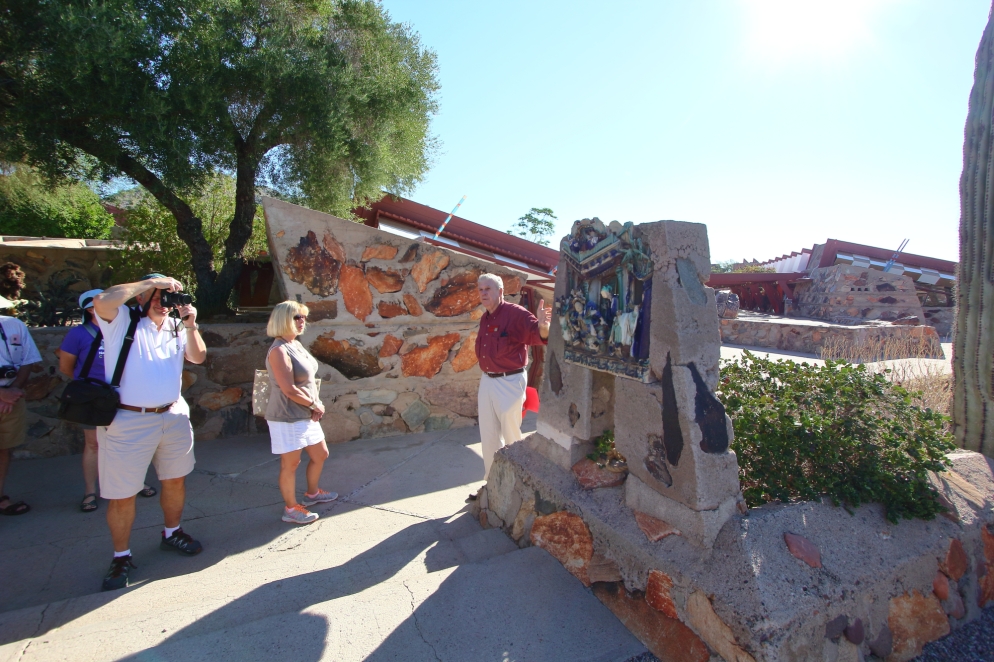 This is the area outside the studio.  Multiple pools surround this property.  Wright installed these not to cool off in the Arizona heat, but for fire suppression should the need arise (as it had multiple times at Taliesin). [click to enlarge] 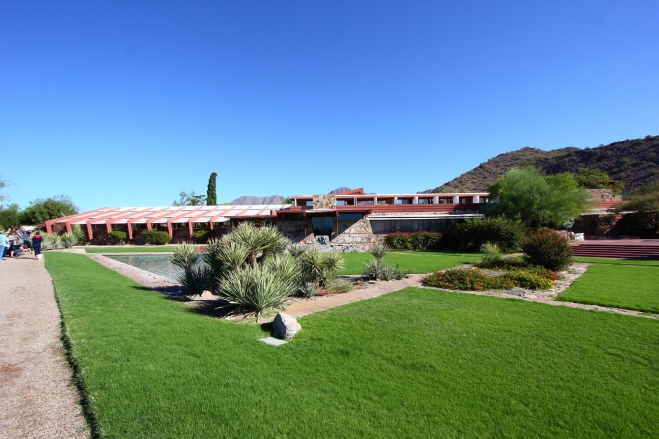 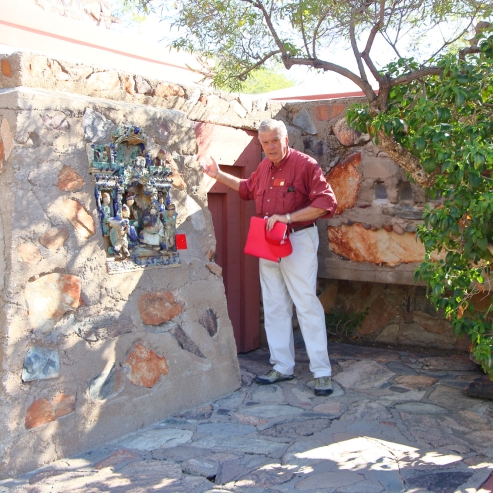 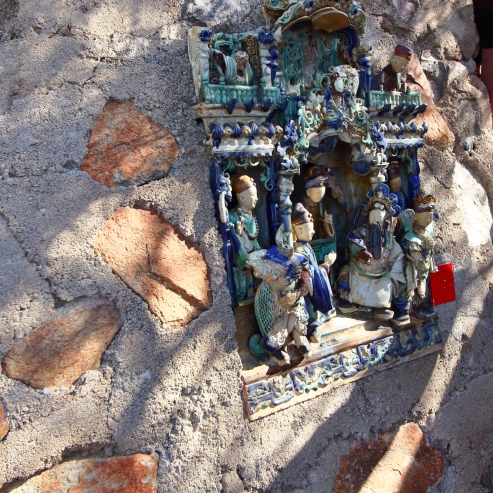 The petroglyph above is one of many such rocks scattered around the desert in this area.  Wright was fascinated by the imagery, even adopting a symbol as the logo of his architecture school (see upper right of linked page).  He assumed the symbol represented two people holding hands, but it turns out it represents an arrow in flight. 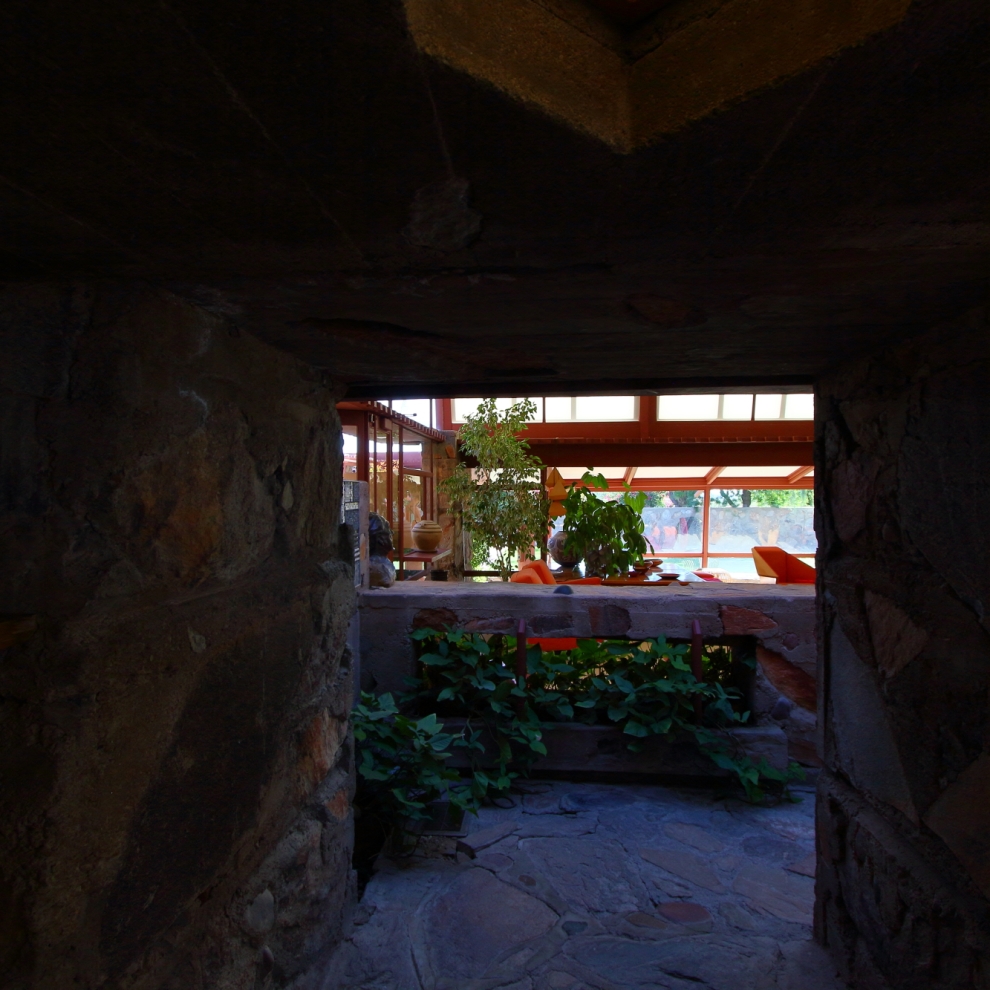 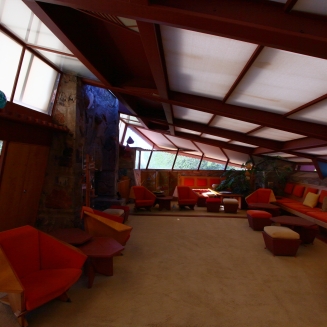 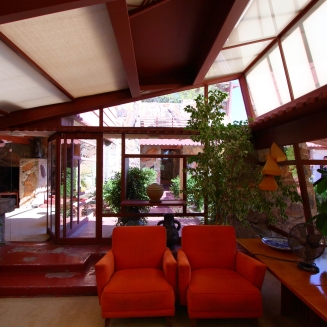 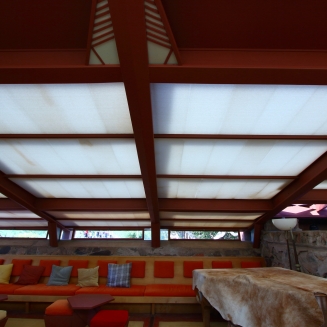 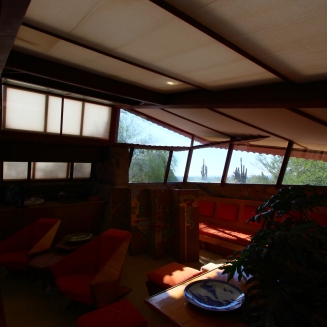 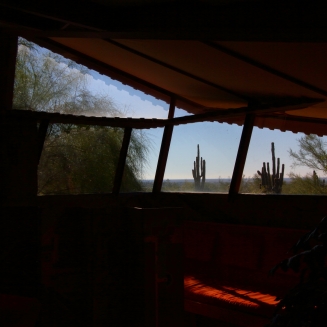 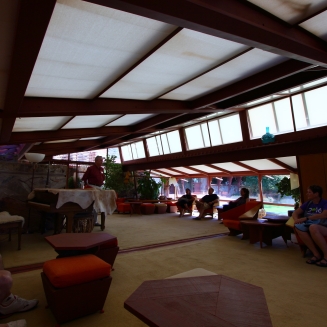 Wright is largely responsible for what we consider the open floor plan so popular today, and he was way ahead of his time.  At Taliesin in Wisconsin, for example, the kitchen isn’t separated from the other living spaces by doors.  How many people are now tearing down walls in houses built since then to try to achieve the same flow?

His living spaces, particularly in the two homes he lived in, really do flow from one area to the next almost seamlessly.  And yet, Wright was a master of subtly differentiating spaces, for example by changing ceiling or floor height or by using half walls, creating a sense of intimacy within the larger space.

Outside of that main house is a walled garden, and the Wrights’ bedrooms.  Neither bedroom had doors, but only hanging fabric providing privacy from the garden.  Note Wright’s bathroom.  Both Taliesins were living laboratories for Wright’s ideas.  When the original wood planking in his bathroom began to deteriorate, Wright sought out a more durable material.  Apparently he got quite a bargain on some aircraft aluminum:  [click to enlarge] 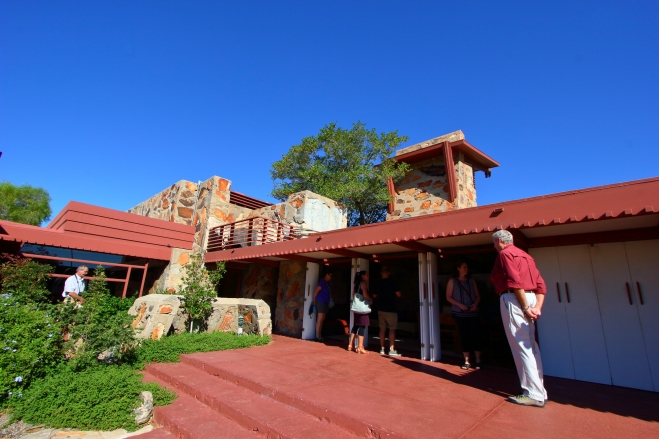 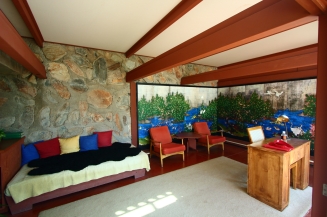 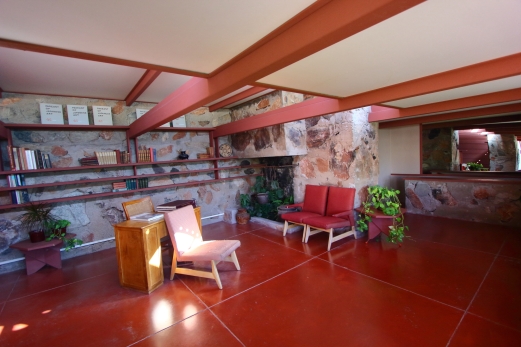 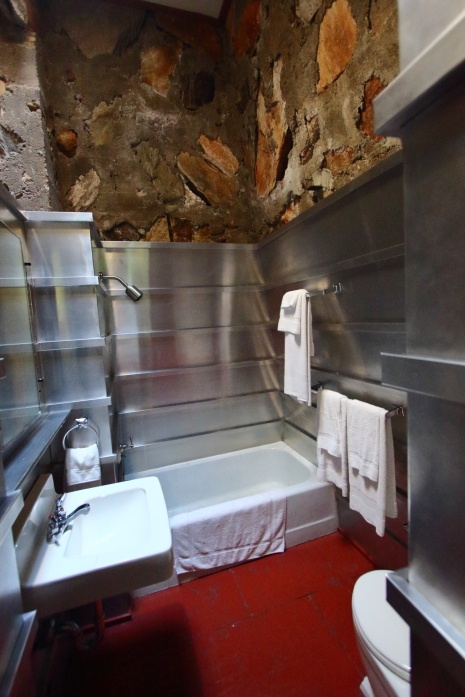 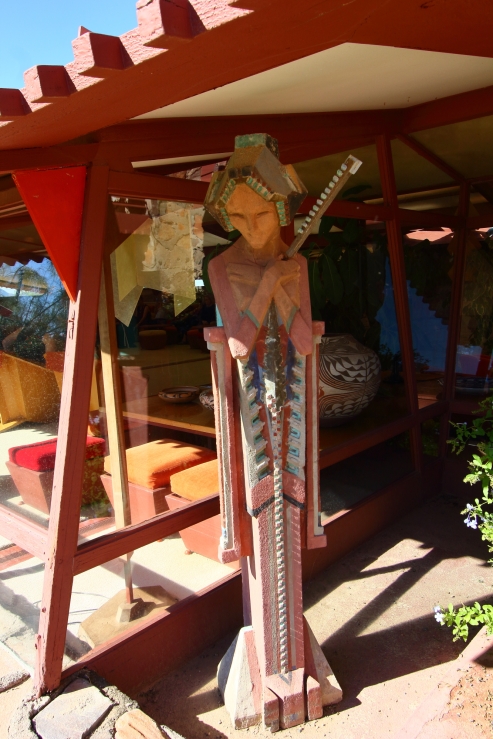 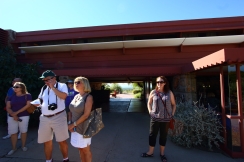 Inside this studio are architecture students setting up for winter term.  They are probably the same students we saw in Wisconsin in the summer.  As in Wright’s time, the school spends half the year at each location. 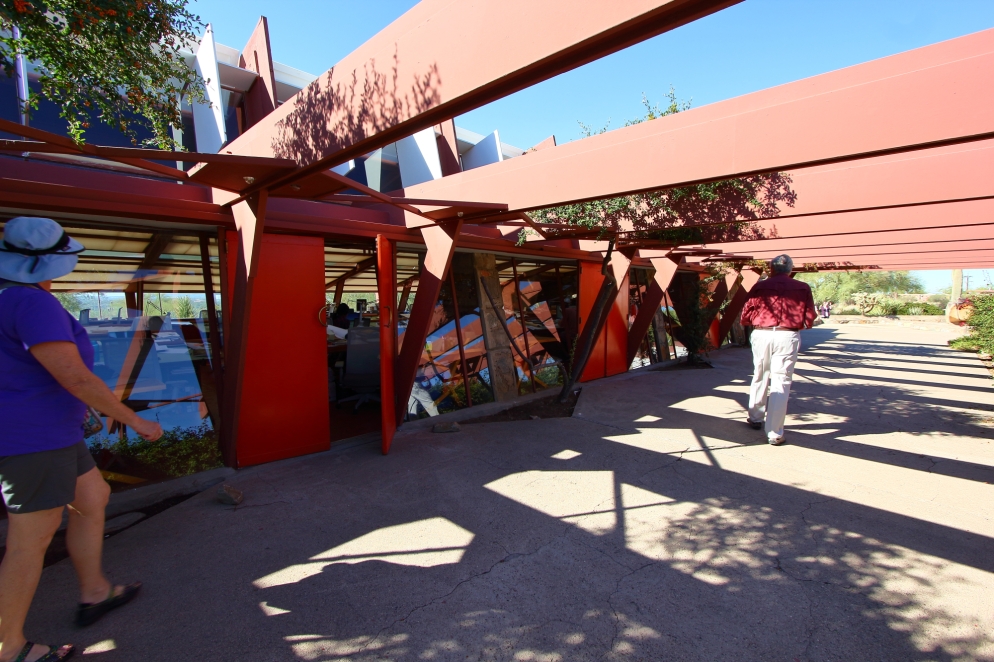 This sculpture garden features works of sculptor Heloise Crista, who has been working at Taliesin West as artist in residence since the 1940s, and is still active today. 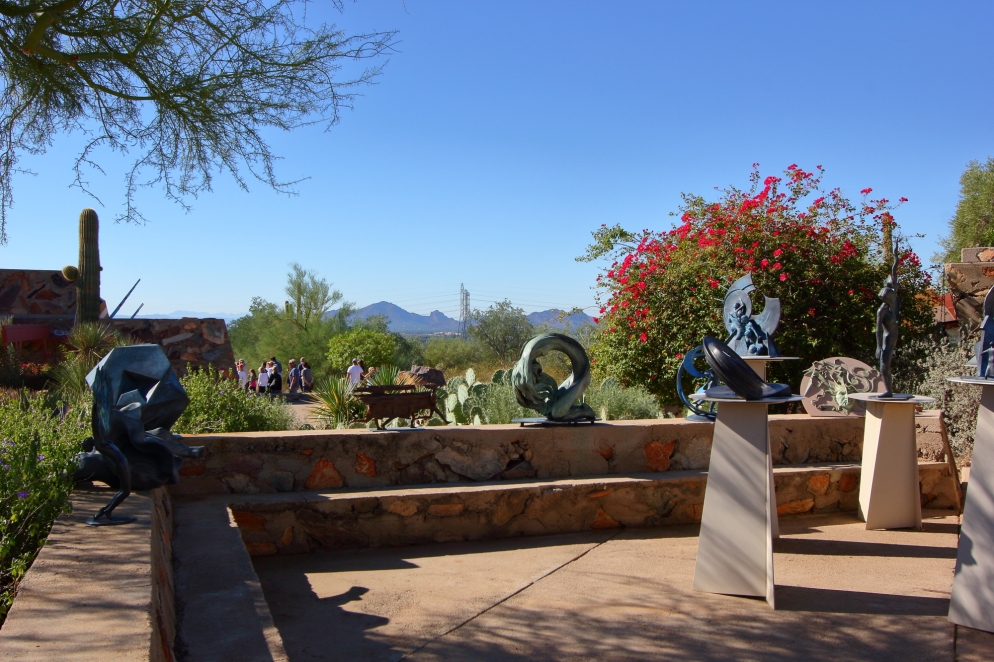 Taliesin West has a theater much like the one at Taliesin.  This Lego replica of the entire site was available for sale for the low low price of $100k.

Though Wright was 70 when he started wintering in Arizona, he and his wife regularly entertained and ultimately constructed this nightclub on site.  Its acoustics are incredible; whispers on stage can be heard clearly at the back of the space, and the lack of right angles helps prevent echos, keeping the sound pure.  The Wrights’ table was at the back of the club, allegedly so that Wright could eavesdrop on the conversations of all their guests. 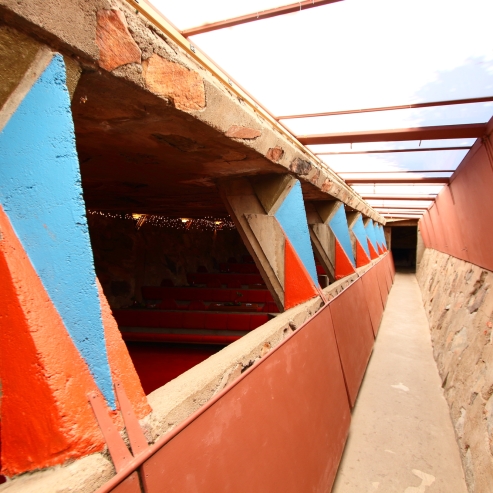 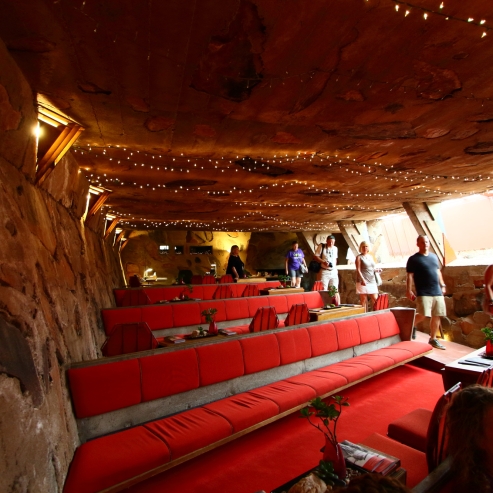 We obviously like the architecture of Frank Lloyd Wright, and touring the two Taliesins was a valuable experience.  Wright was a very unusual person.  Probably not a good man.  But certainly a great man.  His influence is everywhere in the US, once you learn to see it.

The drive from the Phoenix area into New Mexico and to Texas along I-10 is a desolate stretch that runs very close to the U.S.-Mexican border: 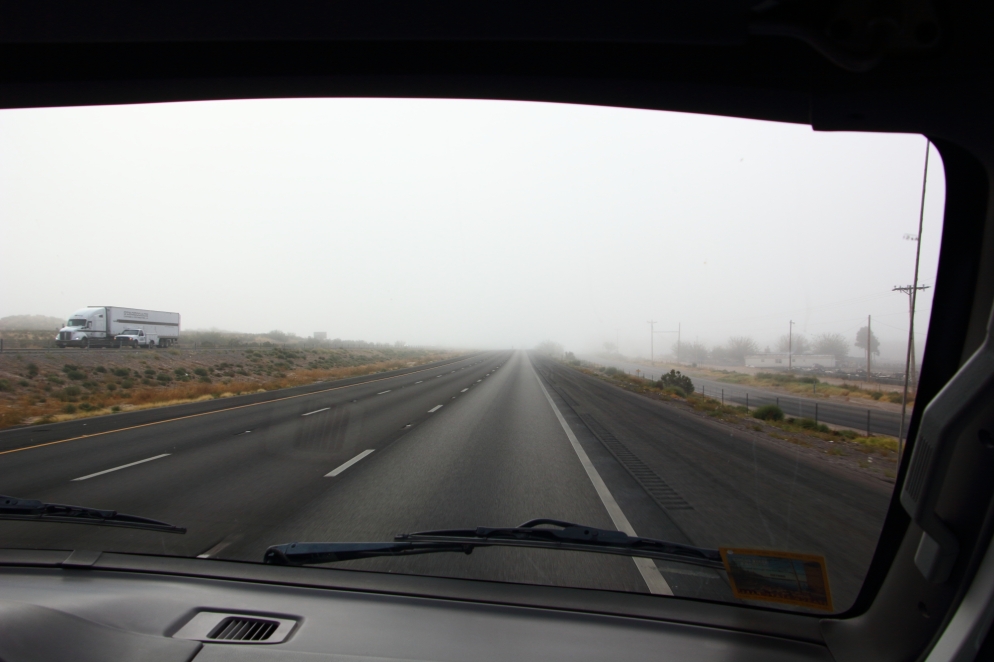 We stopped for the night in Junction, Texas.  Back in genuine BBQ country. 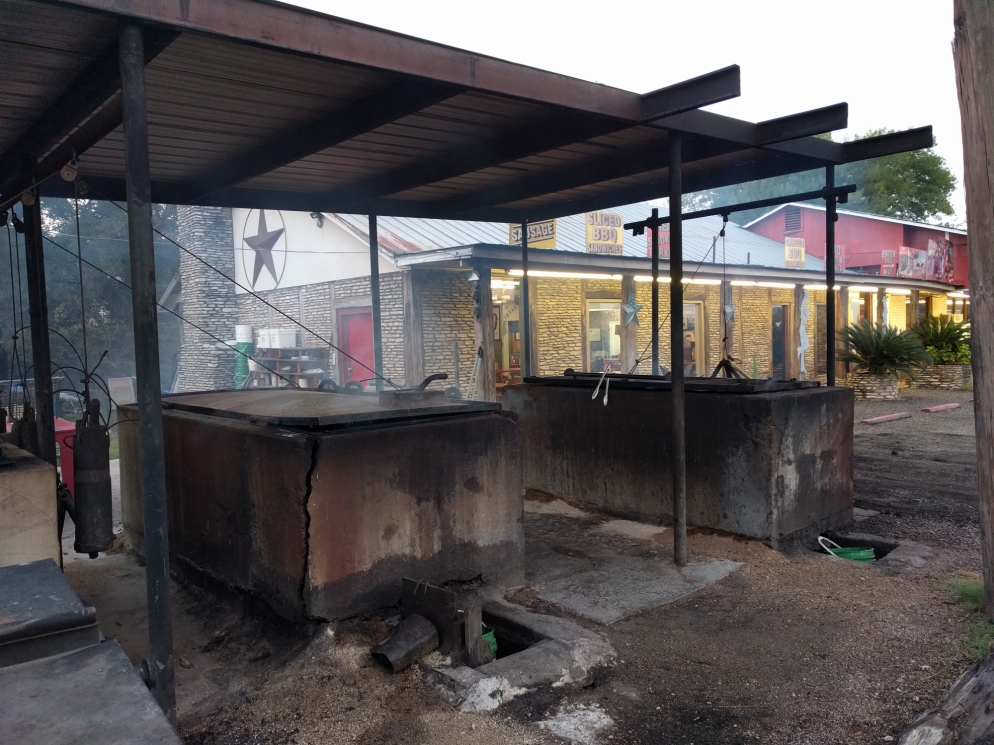 We spent time time in Texas both in Blessing with Laura’s mom and in Houston with friends.  Of course in Blessing, we always find creepy cows:

That’s it for our 2016 U.S. adventures.  Next time you hear from us, we’ll have changed our whole latitude.