We’ve been fans of Frank Lloyd Wright architecture for a long time.  On July 11, on the way to Milwaukee, we visited his home and “architectural campus,” Taliesin.  It’s near Spring Green, Wisconsin, a small town about 40 miles west of Madison.

Long before Wright built his home there, his aunts operated the Hillside Home School in the same valley.  Wright designed buildings for that school around 1900 that stand today.  They also house the Frank Lloyd Wright School of Architecture that Wright started in order to earn money during the Great Depression.

These buildings have communal meeting and dining spaces and house a theater. [click photos to enlarge]

Wright designed virtually all of the details for his spaces, down to fireplace decor and door handles.  If home building clients would allow, he would also design all the furniture, and in some cases even the clothing to be worn inside the homes.  After all, why go through all the trouble of getting a  perfectly designed house if you’re going to just ruin it with clutter and inferior design. 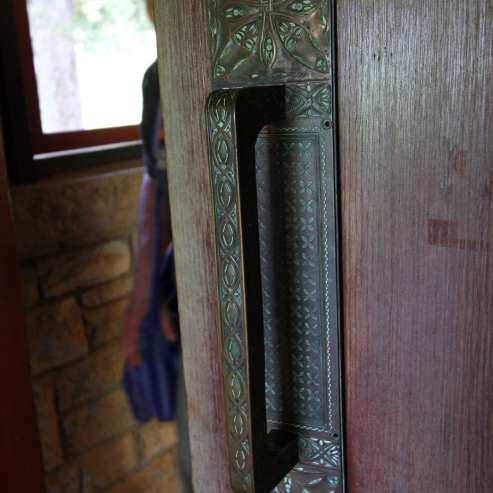 Next to the school building is a Wright-designed theater.  The cantilevered roof of the theater is built into a tree.  This creates a quandary for preservationists who have to figure out what to do when the tree dies.  [click photos to enlarge] 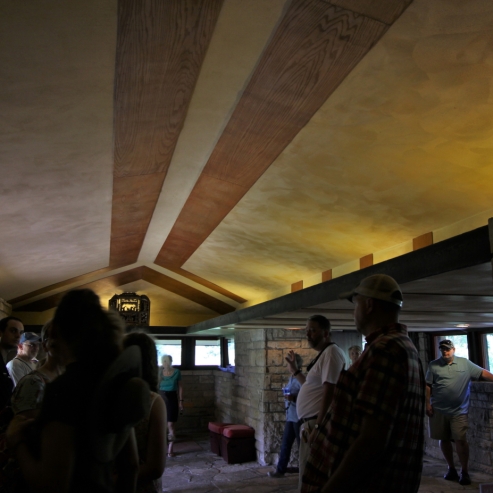 The interior photo of the theater interest demonstrates Wright’s signature use of compression and expansion to direct traffic.  The uncomfortably low ceiling at the doorway expands to a high roof in the center, encouraging traffic to move promptly away from the doorway.

Wright also designed this windmill, which members of his family expected to get blown over with every storm after its construction.  It’s hollow.  But Wright positioned it in order best withstand most storms that hit the valley.  It’s been standing for more than 100 years. 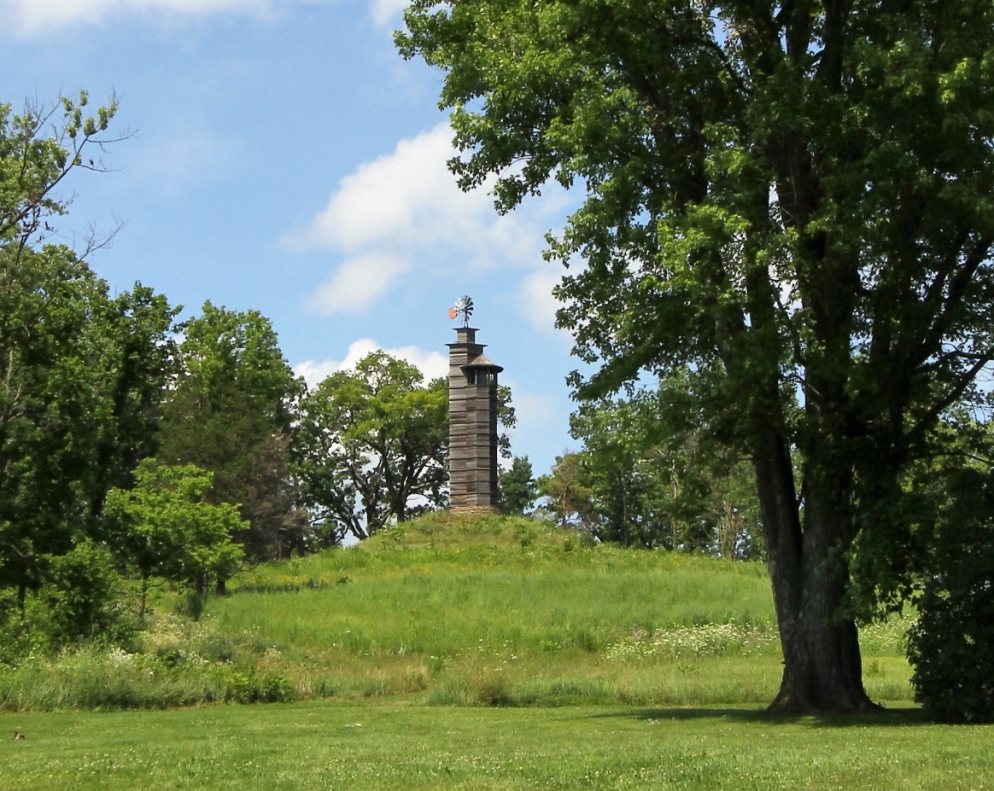 “Completed” in 1911, Taliesin (like most Wright architecture) is meant to blend in with its surrounding nature.  Taliesin means “shining brow” in Welsh, referring to the house’s position on its hilltop location.  Not at the top standing proud, but more integrated into the setting. [click photos to enlarge]

The house from the top of the hill 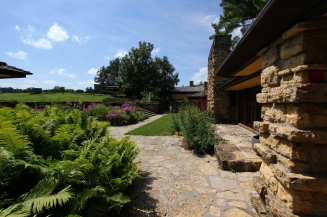 The garden and hilltop

Wright liked to hide entrances so visitors would have to wander around, admiring the architecture.

The house has a sensational past and was twice significantly damaged by  fire.  In 1914, just three years after completion, a servant went nuts, set the house on fire and murdered seven people, including Wright’s mistress and her two children (Wright was not home).  If you’ve read Loving Frank, this is a familiar story.  Our tour guide told us that the book had significantly increased interest in Taliesin.

In 1925 the house caught fire again, this time possibly due to an electrical problem.  Wright was home this time and helped put out the fire.  Wright lived at Taliesin (at least seasonally) for nearly 40 years.  He used the house and the 800 acre valley that it sits in as a living laboratory.  The home itself was continuously renovated as he experimented with materials and techniques and occasionally added features in order to impress important visitors.  Note the absence of power lines in the valley.  Wright didn’t want his views spoiled. [click photos to enlarge]

Wright built this cantilevered “birdwalk” at the request of his wife.

A column outside the front entry bears this signature tile, referred to as Wright’s “seal of approval.” 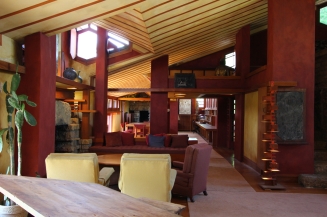 Also onsite are apartments where apprentices historically lived on site.  We learned that at the opening of the school of architecture, the students’ first project was to convert what had been buildings used to house animals into their own living quarters.

The residential space feels surprisingly comfortable compared to other Wright homes we’ve toured.  These pictures don’t necessarily capture how well the rooms feature the nature outside.  The large low windows force the occupants of the home to look outside and see the valley that Wright loved. [click photos to enlarge]

This is Wright’s study, complete with original shag carpet.

Furniture all designed by Wright, of course. 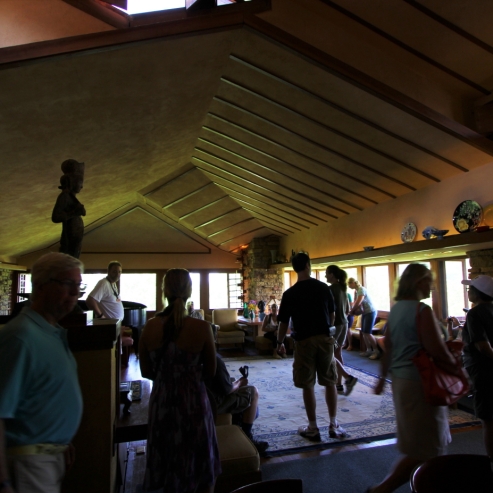 Wright was also a great collector of Asian art.  He considered these pieces that he should use and enjoy as he saw fit.  The centuries old screen in the picture on the left below was originally a single piece.  Wright cut it into eight pieces to fit the room the way he wanted. 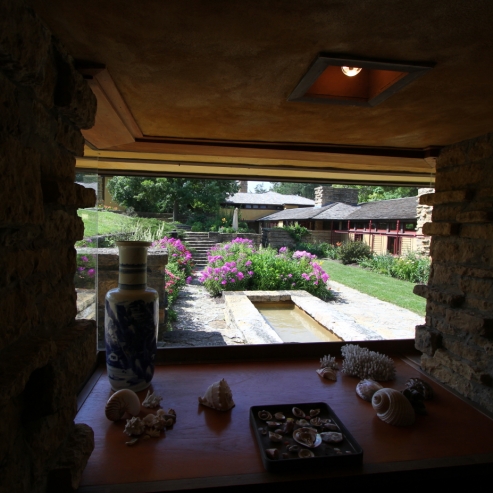 Wright was clearly both a genius and an egomaniac.

But enough architectural nerdery.  We moved on to spend a couple of nights in Milwaukee, a city we had not previously visited.  We camped at the RV park at the Wisconsin State Fair.  Again, it’s really just a parking lot, but it’s a good clean facility that is an easy Uber/cab ride into downtown.

Along Milwaukee’s long lakeshore is the Milwaukee Art Museum, and it’s amazing Quadracci Pavilion, designed  by famed architect Santiago Calatrava.  Calatrava designed the recently opened World Trade Center Transportation Hub Oculus in New York City, and many other notable buildings around the world, but this structure in Milwaukee was his first commission in the US.   (Sorry, did we say there would be no more architectural nerdery?) Michael arrived in Milwaukee not knowing it’s secret.  As we approached, here’s the building we saw: 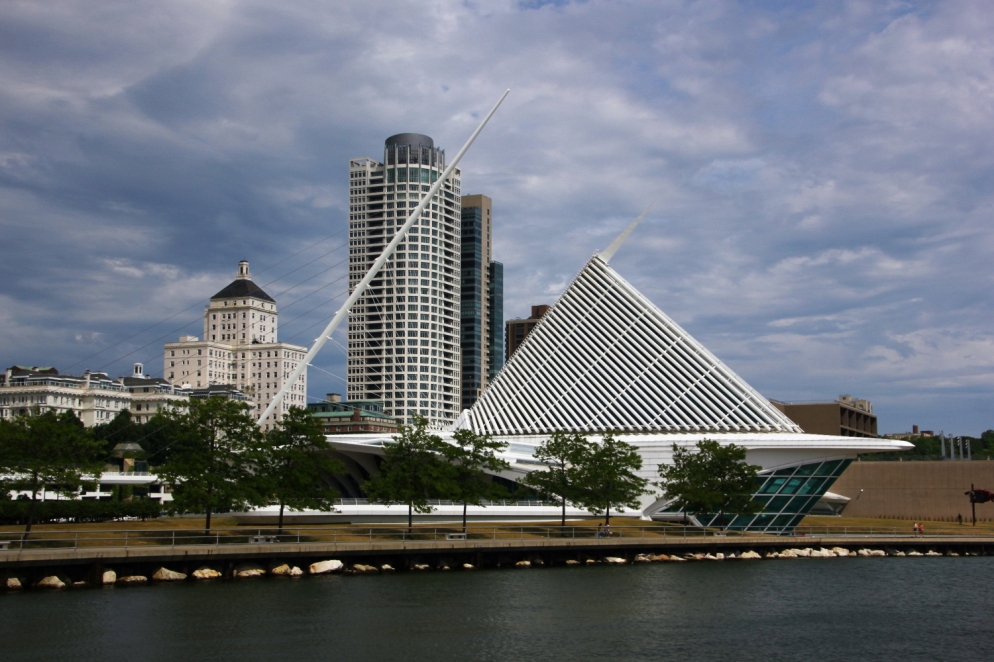 Beautiful, looking like a ship on the shore.  But as we got near, we heard music playing, and looking up saw:

It was amazing.  Now the ship was under sail!  [click to enlarge]

Milwaukee’s downtown has lots of well-preserved architecture from the late 1800s.  [click to enlarge] 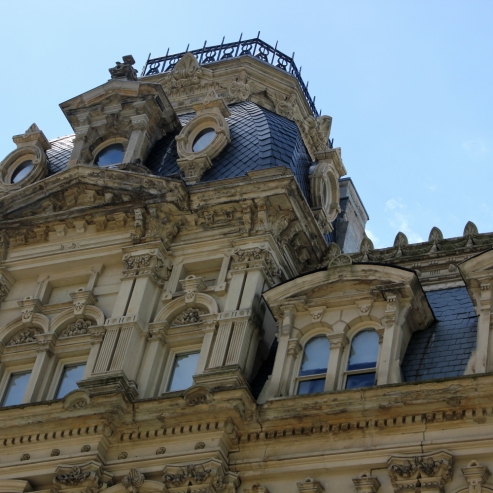 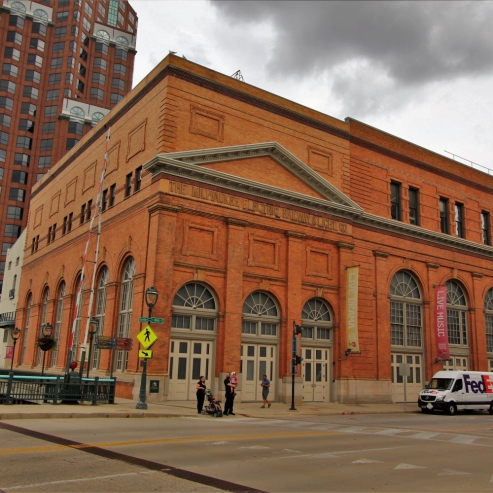 We strolled over to the Milwaukee Public Market in a revitalized section of downtown called the Historic Third Ward.  The market is a nice mix of restaurant / groceries / shopping.  [click photos to enlarge] 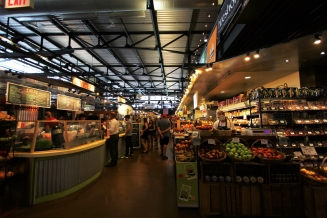 The Milwaukee River also cuts through downtown, creating even more waterfront real estate.  For a town in the center of the continent, Milwaukee has lots of boats. [click photos to enlarge] 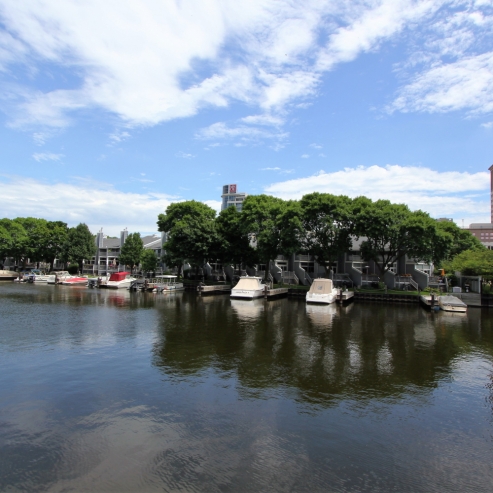 Milwaukee has a history of German immigrants and brewing (remember Laverne & Shirley?  They worked in a Milwaukee brewery).  Both are reflected on Old World Third Street, a block off the river where you can find plenty of beer and German food.

Buy a beer, add a wedge of cheese. It was Laura’s favorite thing in Milwaukee!

We could have toured Miller, but macrobrews are not really our thing.  Instead, we checked out Lakefront Brewery.  They have fun, informative tours and a good beer hall. [click photos to enlarge]

We also spent some time walking around the Brewer’s Hill neighborhood, which is reminiscent of St. Paul’s Cathedral hill, but, like its downtown, clearly a couple of decades more developed at the end of the 19th century.  In that area, we also came upon the former home of the Schlitz brewery, which has been converted into a massive business park. 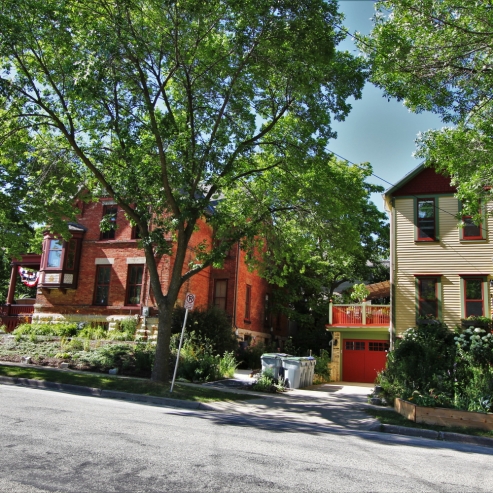 We rounded out the day with a couple of beers at bars like The Harp.  From street level it doesn’t look like much, but it sits right on the river.  So the back side has this incredible deck.  You can dock your boat at the bar.

We made a final stop for $2 brats at Milwaukee Brat House.  You can’t leave Milwaukee without eating some sausage.

Milwaukee surprised us, in a good way.  If you haven’t been there, it’s definitely worth a visit.

From Milwaukee, we drove south along Lake Michigan, driving down state highways in lieu of the freeway.  We drove through towns like Racine, which have lots of interesting small town architecture. 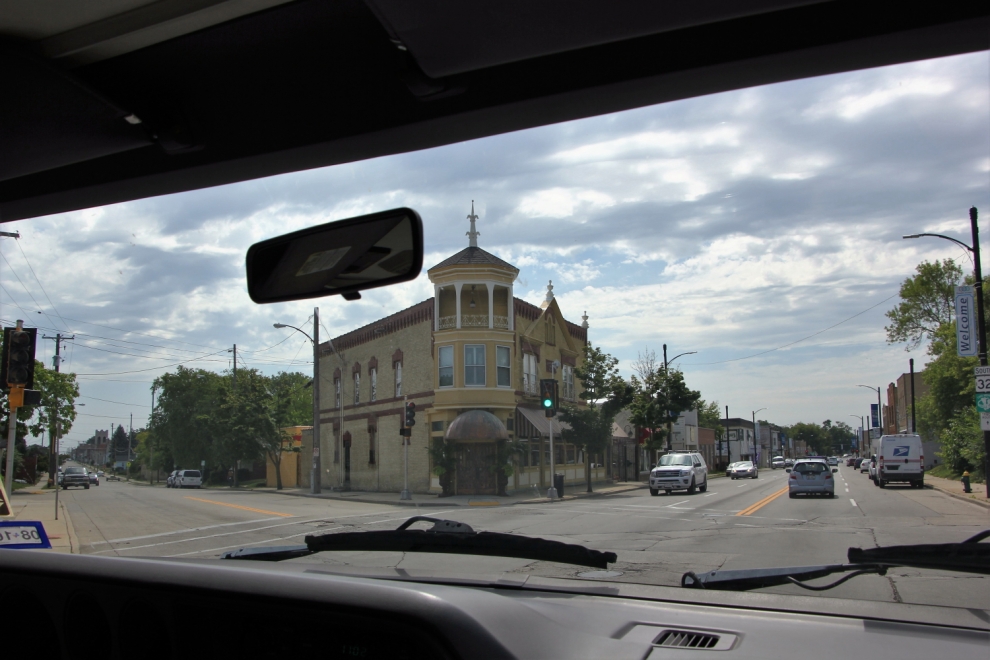 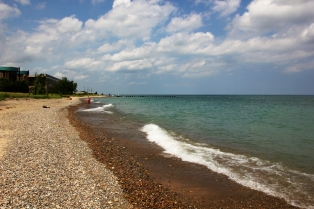 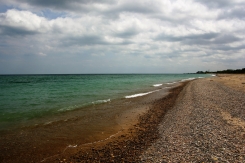 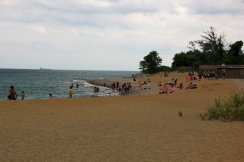 It was a nice wooded space.  Lake Michigan is not as cold as Lake Superior, but it’s much colder than water we want to swim in.  As you can see, kids are not so concerned about such things.

Before heading back to the Twin Cities, we made an overnight stop in Chicago (about 1.5 hours south of Milwaukee). 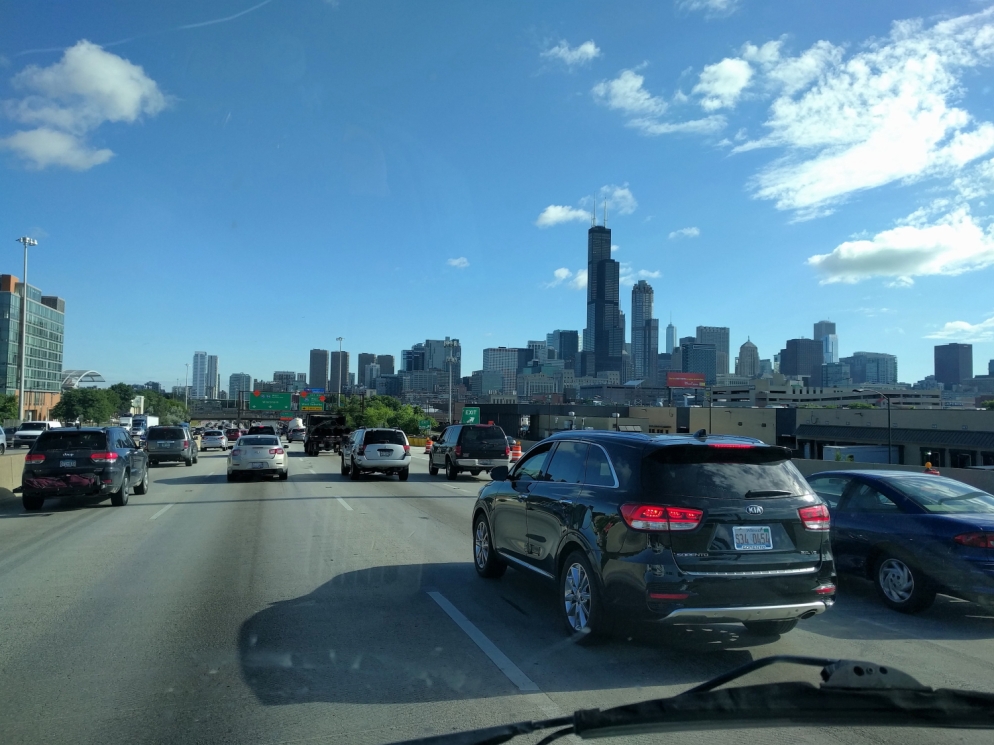 Our camp site was not so nice as the previous night:

The truck marshaling lot on the south side of McCormack Place isn’t glamorous, but it’s right near downtown, and you can park an RV there for $35 a night, a steal for Chicago.  And we only got charged the auto/truck parking rate, so it was even cheaper.

Some crazy friends from the Twin Cities met us there and we had a great dinner at Duck Duck Goat.  If you’re in Chicago, you should check it out (or one of Stephanie Izard’s other restaurants).

It was a nice trip:

That’s it for the Midwest for now.

3 thoughts on “Our House in Milwaukee”