April 24, 2017:  It’s entirely possible that some day “Our House in New Orleans” will refer to something a lot more stationary than a van.  We really like this town.

Before we dive in, we wanted to let you know that we updated our last post with a travel map to show you where we were.

We have both been to New Orleans many time over the years.  We were both taken there as children, and both returned independently as college students, and have visited together several times in the last 25 or so years.

Just about everyone who visits New Orleans spends some time (maybe all of their time) wandering around the French Quarter.

Everyone knows about Bourbon Street and its iconic rowdiness. 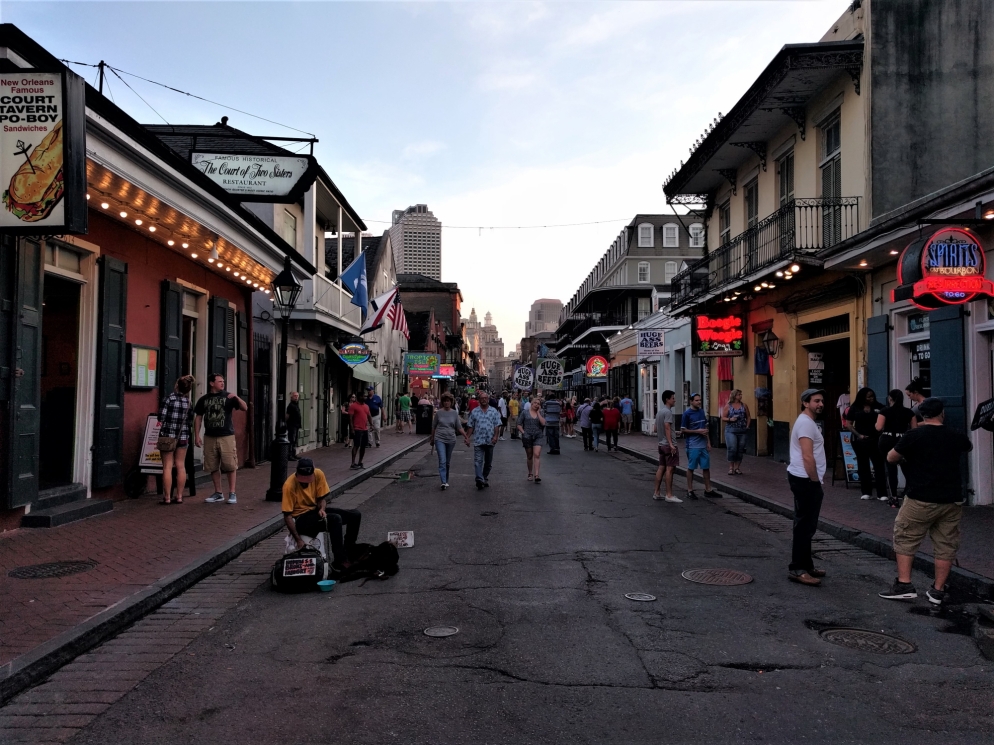 We have noticed that, post Katrina, there has been a considerable change to Bourbon Street.  There are more corporate chains (even if those chains are daiquiri stands and strip clubs).  It’s a lot less seedy than it used to be, though it still has plenty of bacchanalian excesses if that’s what you’re after.  As as example of the gradual taming of Bourbon Street, we are told there used to be a strip club where a woman would swing out a window over the sidewalk.  We remember a pair of shapely mannequin legs wearing fishnet stockings in her place.  Now there’s this rather sad display:

Bourbon Street is the epicenter of New Orleans mass tourism, and like many such places around the world, this street is the least “New Orleans” place in the city, filled with souvenir shops and other business designed to separate inhibition-lowered tourists from their money.  However, unlike a lot of similar places, Bourbon Street has not lost its soul to generic consumerism.  The street still maintains its New Orleans flavor.  The drinks are cheap, the food is actually good, there is live music playing everywhere.  It’s also full of beggars and freaks, buskers and artists, and often smells mildly of stale beer, urine, and horse manure (though the street is swept and washed meticulously every night).

The French Quarter is the iconically touristy area of New Orleans.  Bourbon Street is the loud, rowdy epicenter.  Parallel, a block away, more stately Royal Street is lined with high end antique stores and art galleries.  A couple blocks to the south, Decatur marks the southern end of the Quarter, with iconic Cafe Du Monde and the river on one side, and Jackson Square on the other. 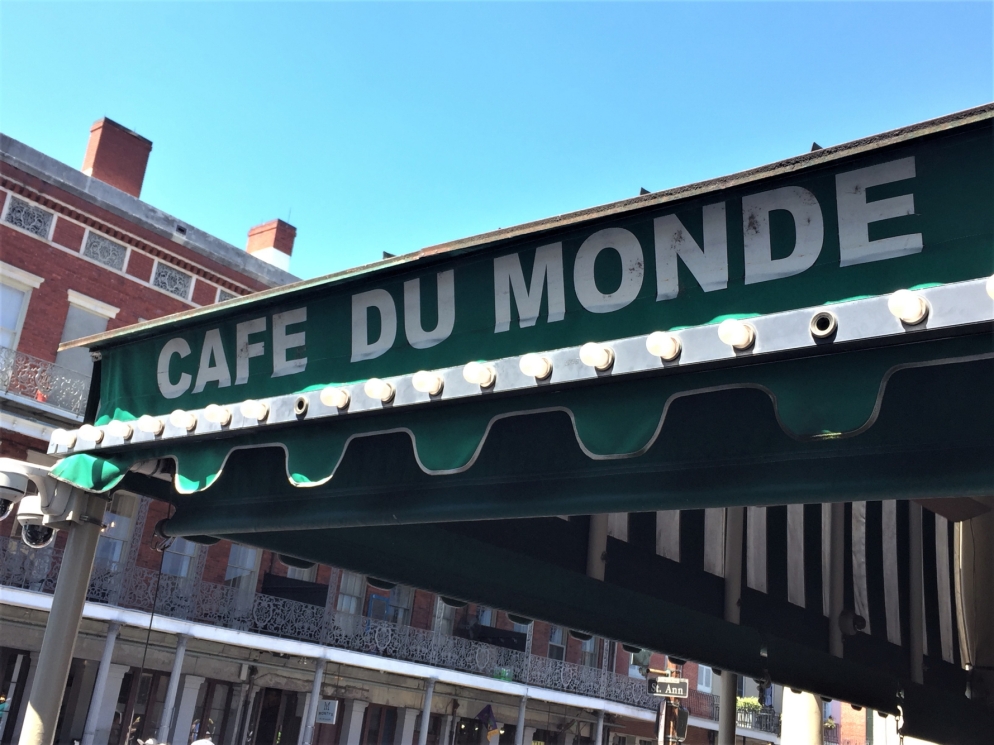 While these areas can be packed with tourists, particularly toward the west where the Quarter is bounded by Canal Street, a few block from the crowds the Quarter becomes much more calm and residential. 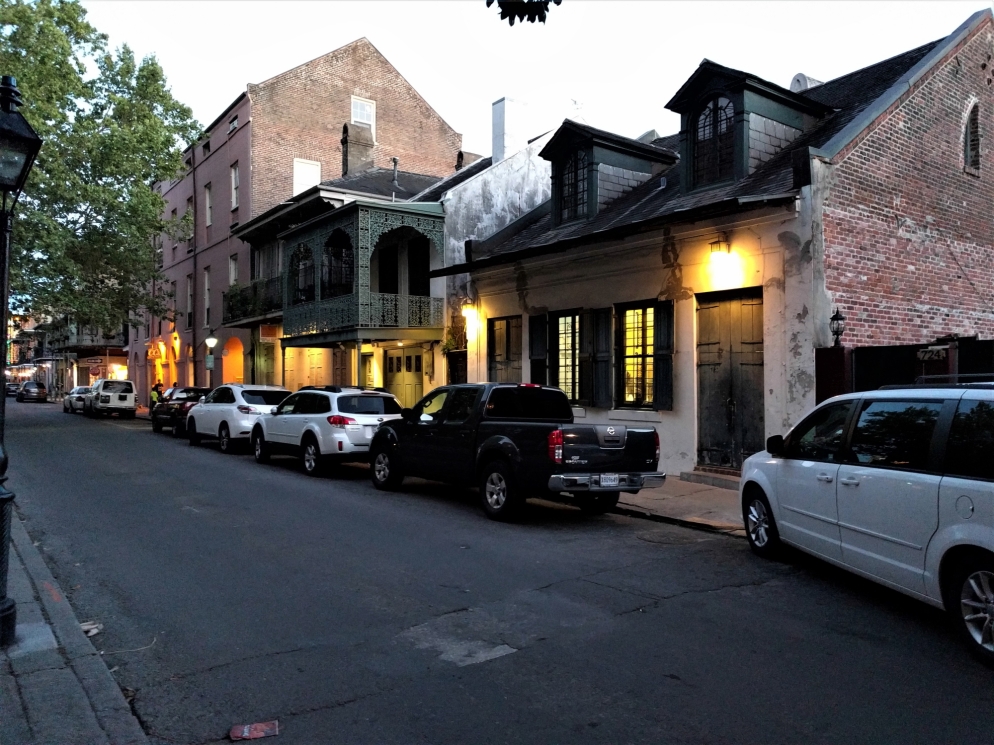 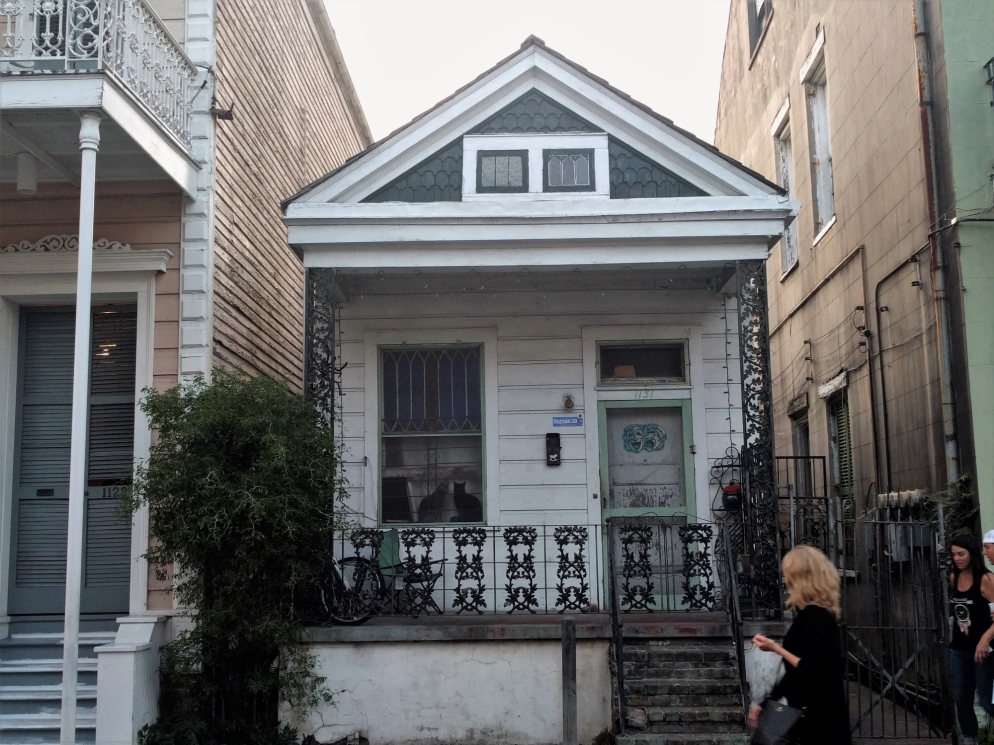 There is a great deal of really attractive old housing in the French Quarter, along with other indicators of civic life like groceries, schools, and offices.  We always wonder who the people are (other than Brad and Angelina) who decide to live in this charming old neighborhood so close to all the madness.  Maybe they are people who look at the world a little differently.

Even in the heart of the touristy area of the Quarter, you find bars like the Chart Room, a dive like no other.  It consistently makes national “best bars” lists, but it manages to feel like a place where only locals hang out.  It’s long been a favorite.

Part of the reason New Orleans holds its charm for us is that going into a bar like this, or pretty much any place (including on Bourbon Street assuming the place isn’t too busy),  you’re often treated like tourists are a rarity.  It isn’t the typical cynical townie-tourist relationship you find in other places.  People ask you where you’re from.  They’re genuinely interested in you.  They’re more than happy to tell you all about their city.  And they almost always have some interesting tales to tell.

We spent a day wandering around the Garden District.  If you’ve ever been to NOLA and made it out of the French Quarter, you may have taken the street car down St. Charles into the Garden District, with it’s stately homes, fascinating cemeteries, and majestic oak lined streets.  About halfway from St. Charles to the river is Magazine Street, a commercial street lined with restaurants and shops exuding a decidedly young, hip vibe coexisting with a strong civic desire to preserve the past.  [click to enlarge] 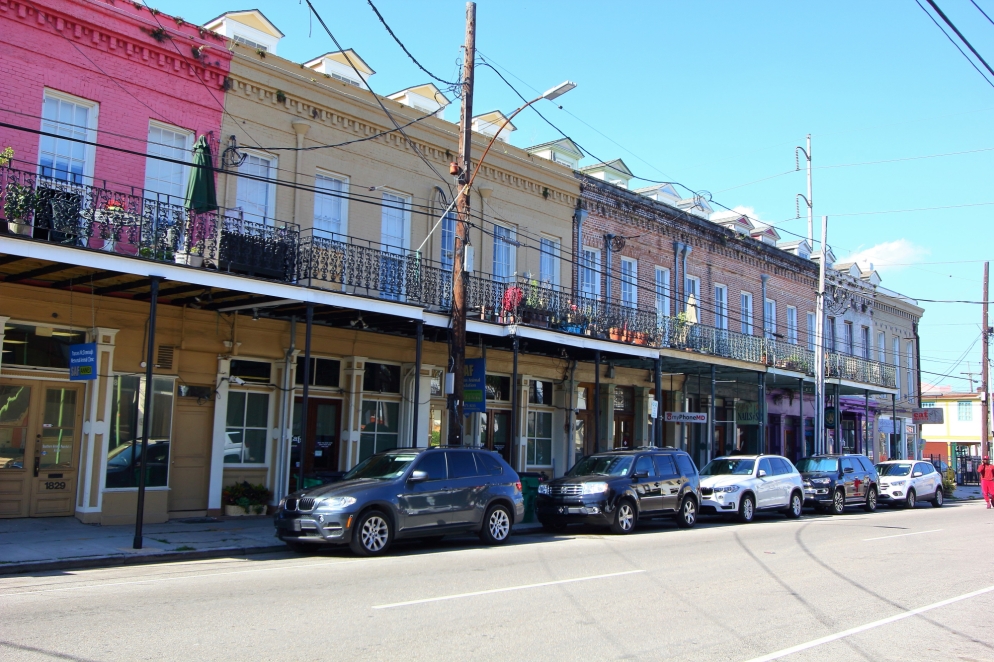 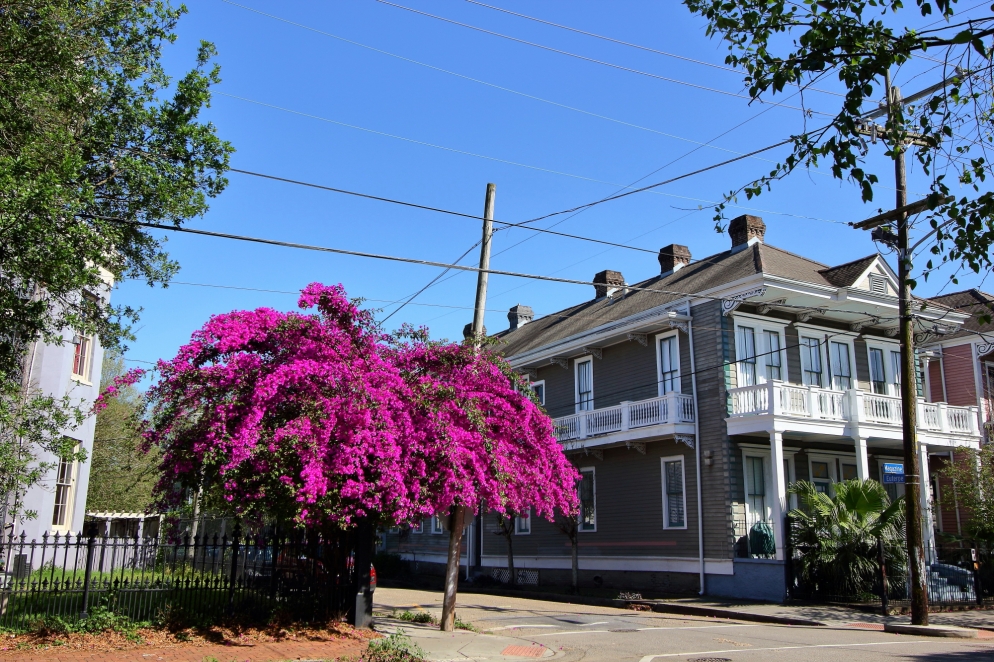 Not everyone is dedicated to preservation of the past:

There is unique shopping: 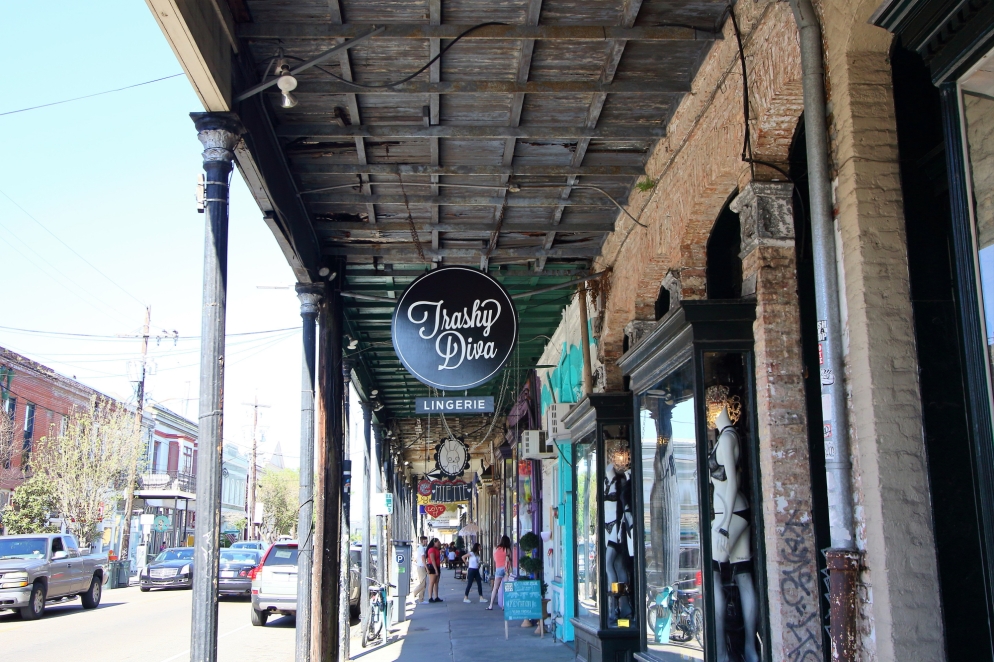 And of course, there are bars and restaurants.  It’s still New Orleans after all. 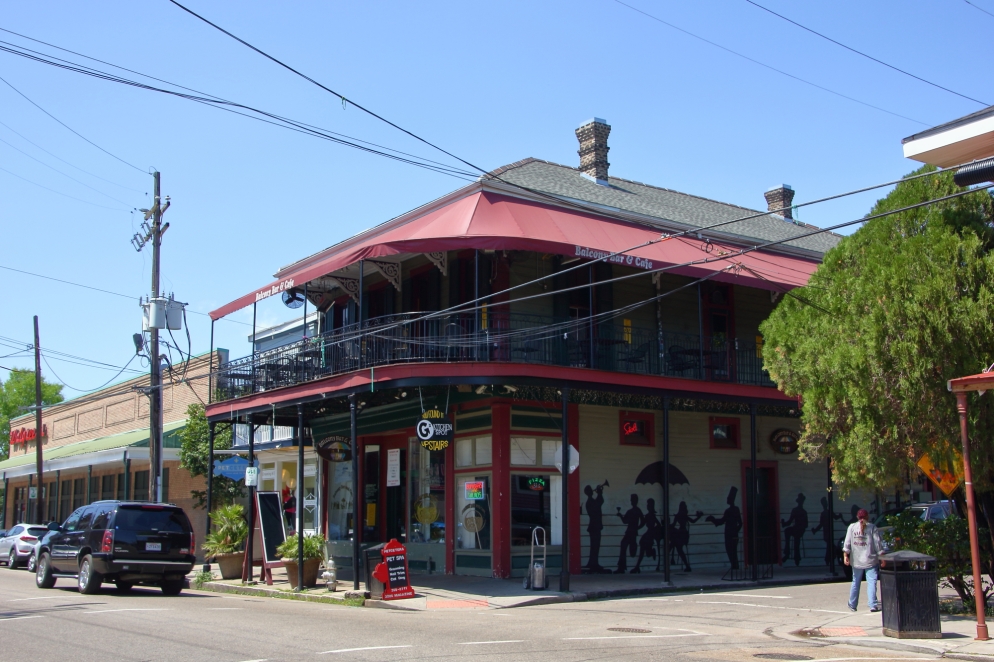 We wandered beyond Magazine Street into the Irish Channel subdistrict.  This area was developed by more blue collar folks, reflected in its charming but more modest architecture.  [click to enlarge] 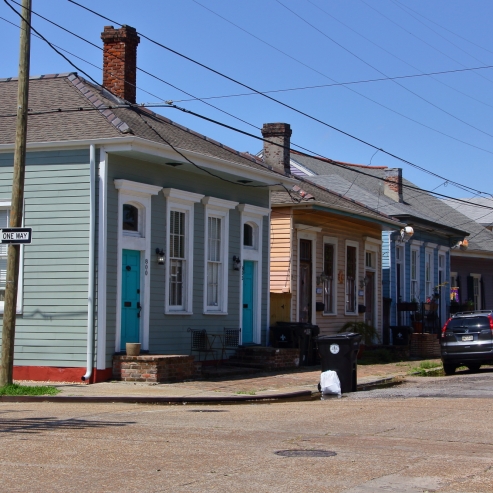 And some delicious breweries, like NOLA Brewing Company, have popped up, presumably taking advantage of the relatively inexpensive real estate. 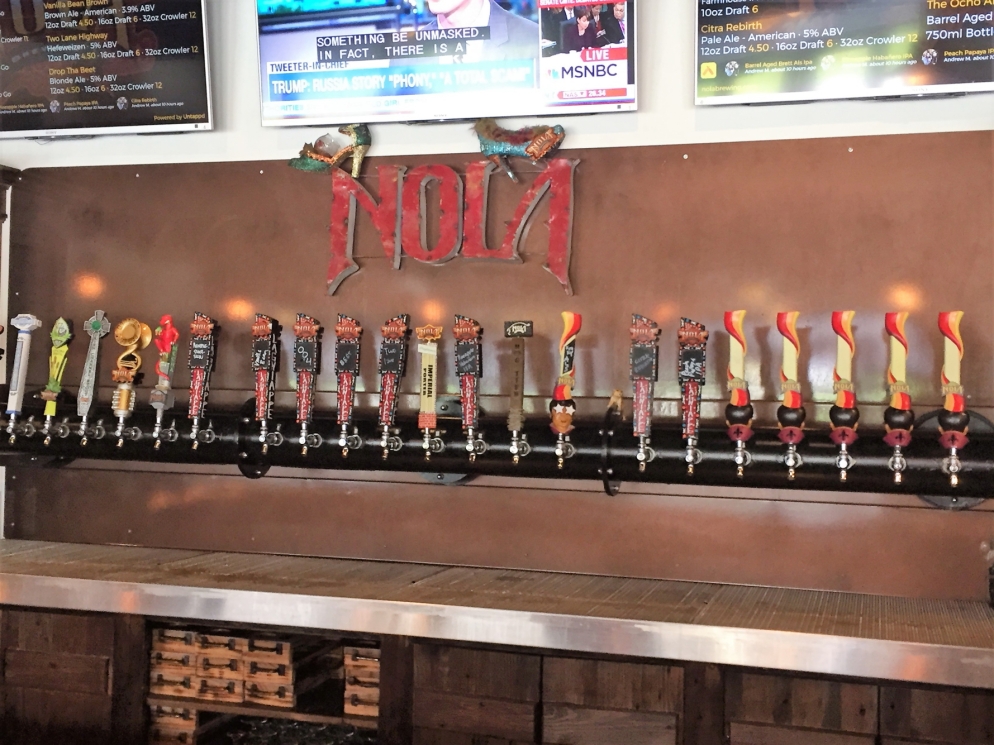 While we were staying in New Orleans, some friends came to town for a visit.  Remember these guys? 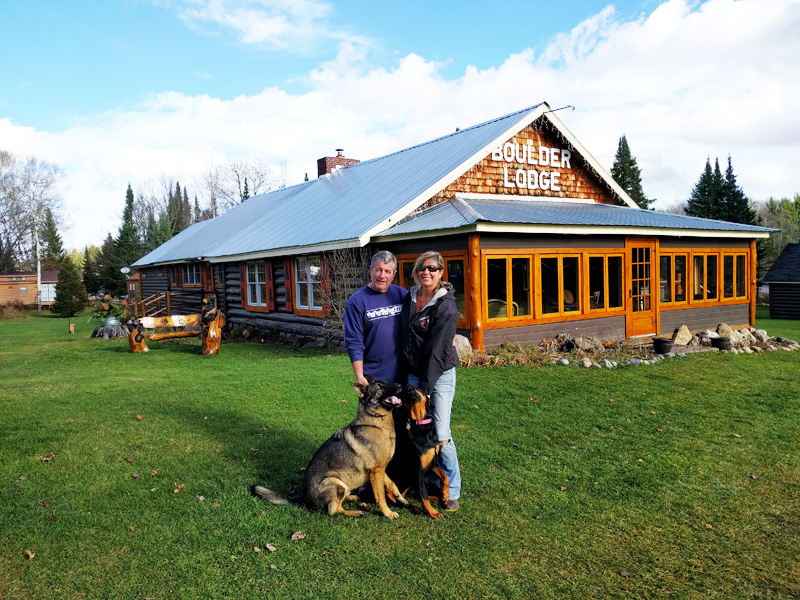 We visited Terry and Michelle at their Boulder Lodge outside of Hayward, Wisconsin on our very first night of this adventure.  Taking an off-season break from the Lodge, they were able to join us for a couple of fun-filled days: 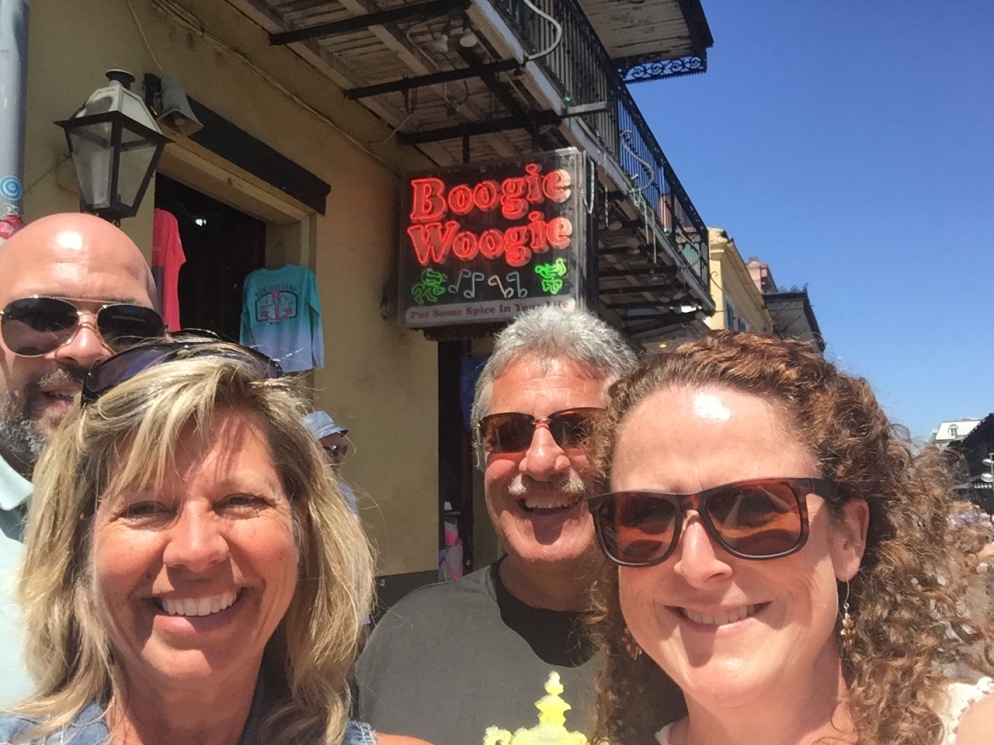 This was Michelle’s first time in New Orleans.  We think she liked it.

A certain level of sobriety is required to interpret the schedule.

We caught this band, the Brass-A-Holics.  Their front man plays the trombone.  They refer to themselves as a “World Famous GoGo Brass Funk Band.”  That sounds about right.

Music in New Orleans doesn’t just happen at festivals, of course.  And not only in the French Quarter.  It’s everywhere, all the time.  A great place to see a variety of live music any day of the week is on Frenchman Street in the nearby Marigny neighborhood. 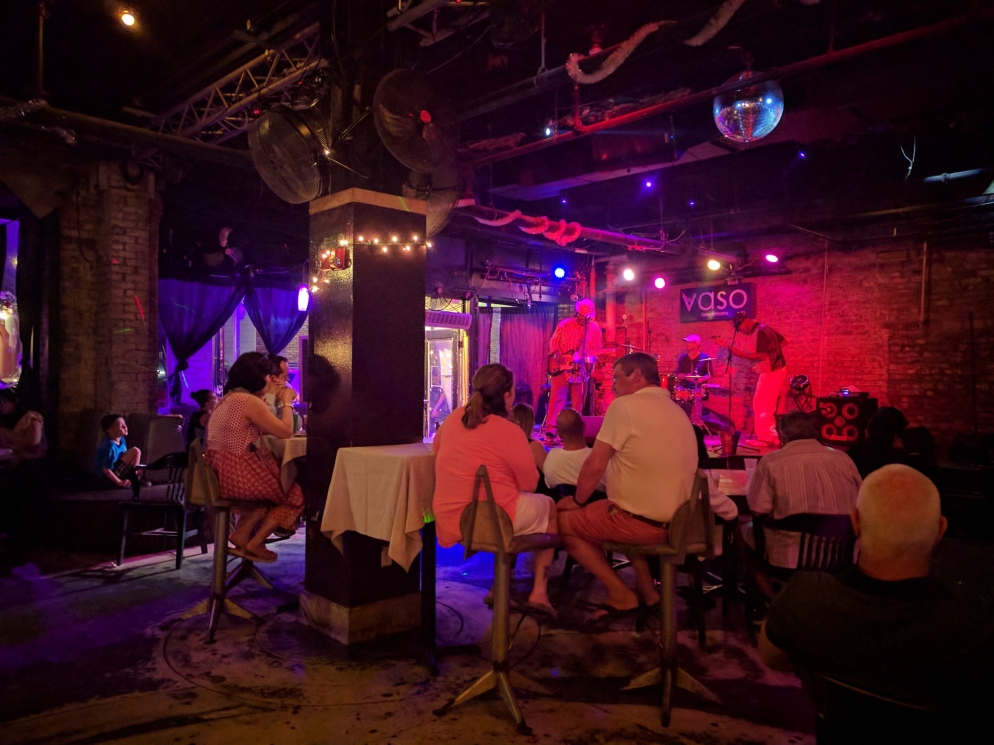 Sometimes, the music is literally in the street:

Don’t worry about the refreshment needs of the spontaneous crown gathered to listen and dance.  An entrepreneurial gentleman was selling water and beer out of a wheeled cooler.  (Speaking of entrepreneurs, we saw a guy boiling and selling crawfish on the street in the Quarter during the festival.)

There are also tons of clubs that feature live acts every night.

New Orleans is also full of amazing food.  That feels like an understatement.  Chefs like Emeril and John Besh are among the famous ones that have New Orleans empires.  We checked out Emeril’s new restaurant Meril in the Warehouse District.  It’s a small plate thing.  At the recommendation of our bartender, we ordered turkey necks.  They were amazing.

There are also plenty of opportunities to eat something delicious that doesn’t cost much.  We hit a lot of oyster happy hours.  For some reason, in most of the country you never even see Gulf oysters, only the much more expensive East and West Coast varieties.  Fine, that leaves more for us.

We also ate the allegedly original muffaletta at Central Grocery. 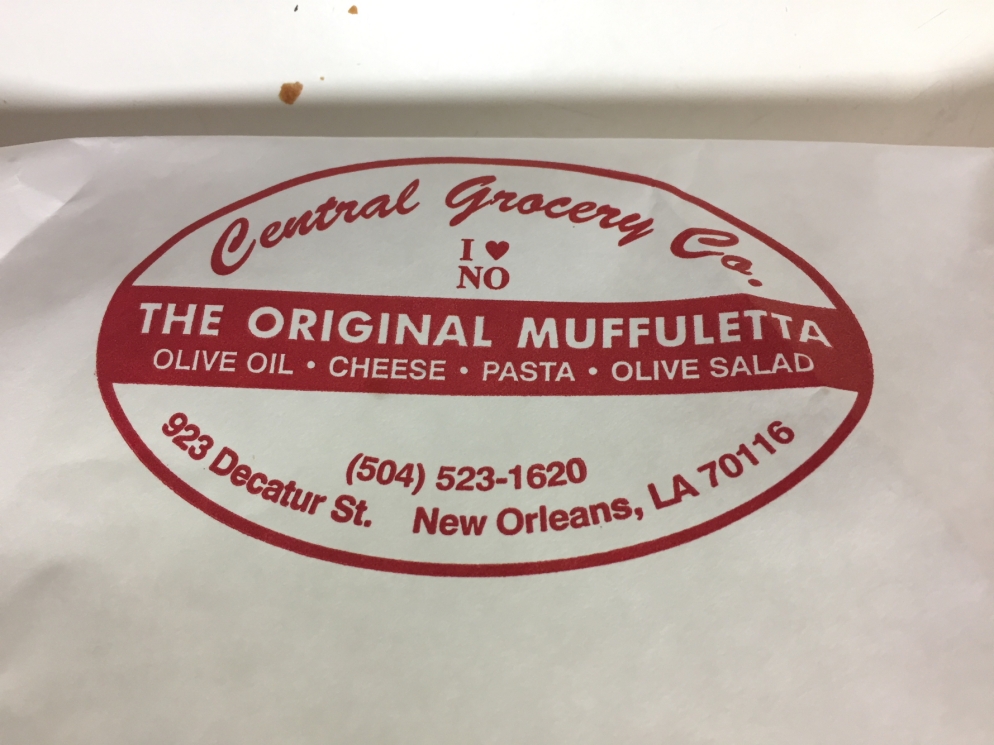 Music and food are what make New Orleans run, and a large part of what makes it such a great place to visit.  But there’s obviously a lot more to this city than eating, drinking, and listening to music, or no one would last here very long.

We spent a day meandering City Park and the nearby Lakeview neighborhood.  New Orleans City Park is a 1300-acre urban oasis.  It’s also home to some serious art.  This is the New Orleans Museum of Art. 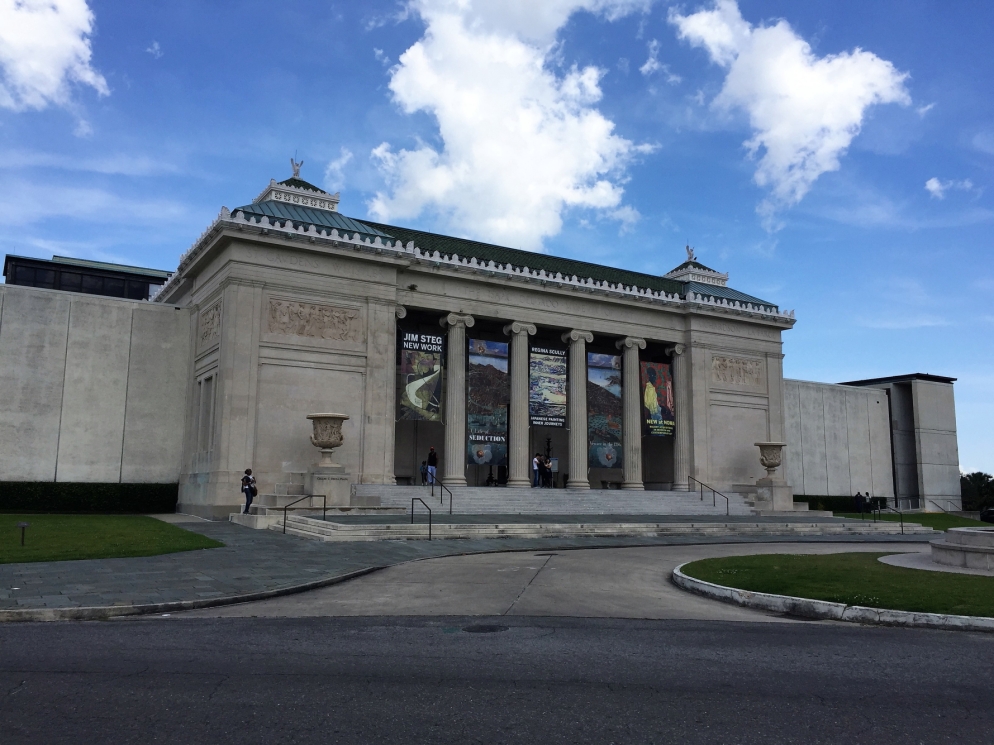 There’s a great sculpture garden next to the museum.  Bonus, it’s free!

New Orleans loves Blue Dog artist George Rodrigue.  We don’t necessarily get it, but his images are all over the city, including this statue:  [click to enlarge] 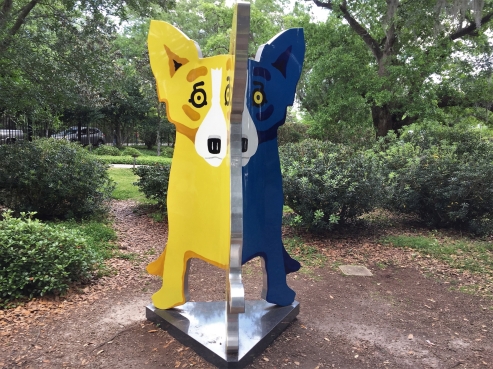 It’s still Louisiana, so where there’s a pool of water, there’s probably an alligator.

The park is full of other things, including a fantastically named youth farm. 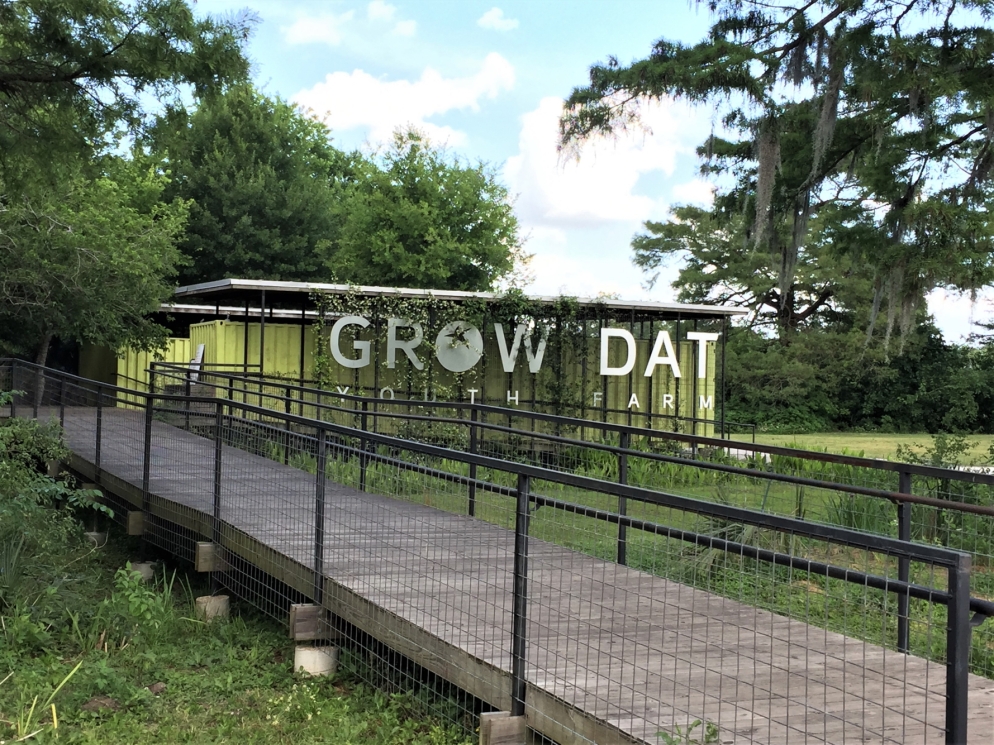 New Orleans is also home to the ever expanding National WWII Museum. 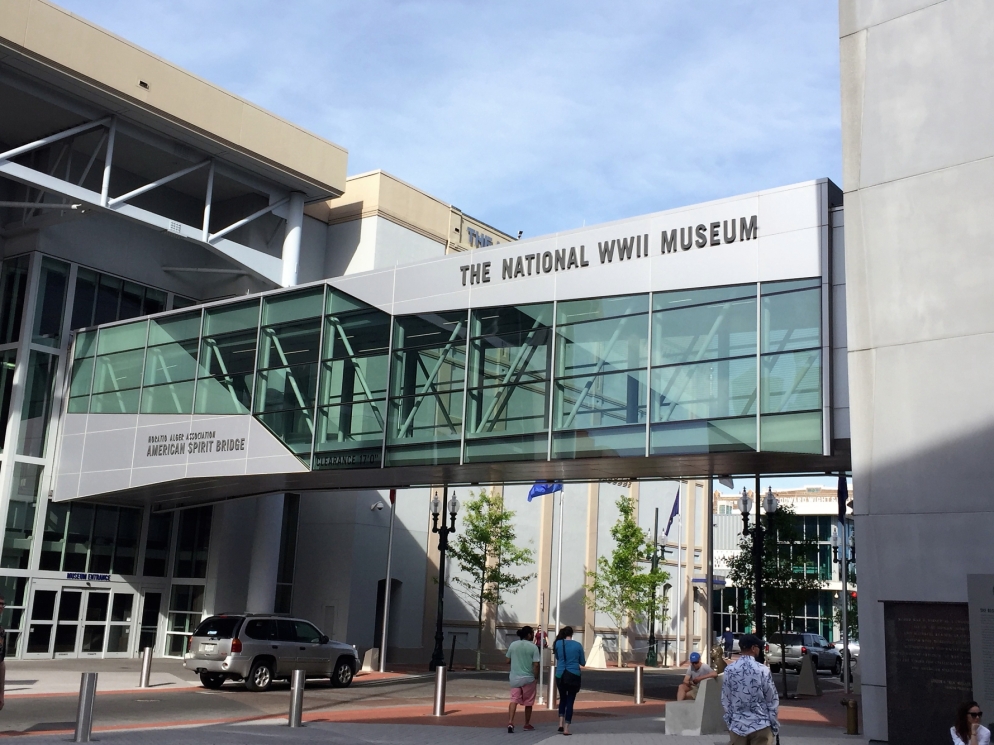 It’s an extensive museum that explores the major battles of the European and Pacific theaters in detail.  There’s also an impressive collection of WWII era fighting vehicles. [click to enlarge] 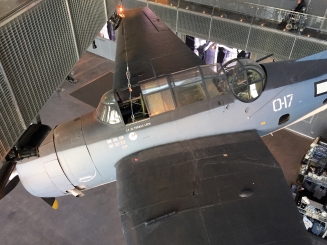 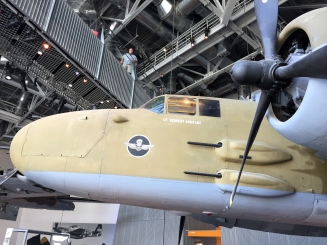 Strangely absent from the museum is much discussion of the role our Allies played in the war.  It is, of course, a national museum, dedicated to chronicling the national experience, but some more information on how US endeavors coordinated with allied efforts would have added some context, as well as, perhaps, more information on the Axis countries and their people.  The overall presentation does a good job of mixing the triumph of victory with the sobering reality of how that victory was won.  This is no cheery propaganda.

This is a very impressive museum, but candidly, we liked it more years ago when it was just the D-Day Museum, and was a lot smaller, and there was less of an effort to try to make things interactive and more on presenting information.  But maybe we’re just grumpy old people who want to go back to the good old days.  It is definitely worth a visit, and a reasonable value.

On past visits to New Orleans, we’ve generally stayed in or near the Quarter.  There are a lot of hotels there and it’s a good base for exploring the city.  This time of course, we needed a home base for the van.  For reasons unknown, there’s a cluster of several RV parks on the east side of town along Highway 90.  We chose Three Oaks and a Pine.  There’s a bus stop out front to get into the city by a combination of buses and street cars.  [click to enlarge]

Was it as convenient as walking out of our hotel onto Bourbon Street?  No.  But the price allowed us to spend 11 days in one of our favorite places, instead of the long weekends that we’ve experienced before.  We’ll take that tradeoff.

So that’s New Orleans!  Thanks for reading.  We’ll let the Brass-a-holics play us out:

5 thoughts on “﻿Our House in New Orleans”