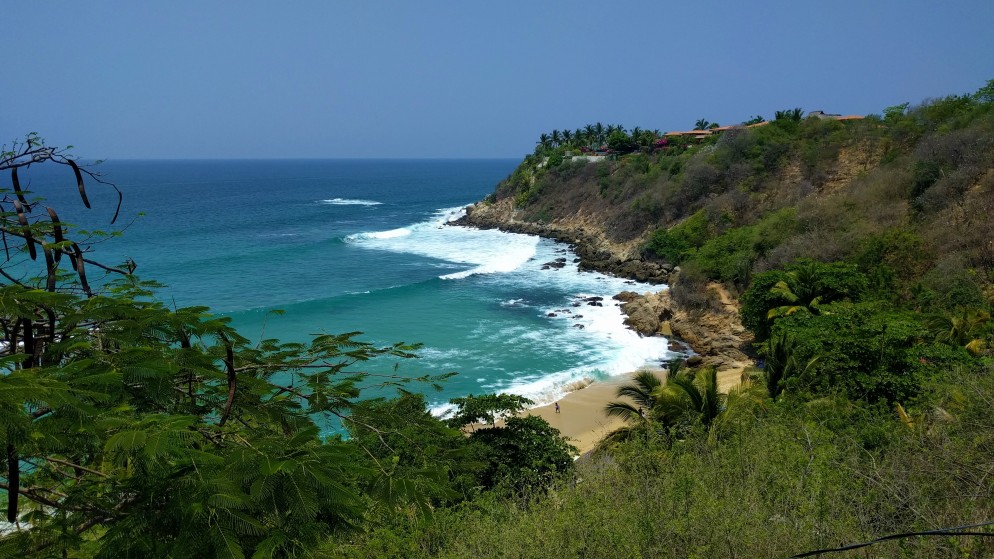 As you know from the last post, our house is sitting in Tuxtla waiting for some repairs.  We were no longer content to sit in Tuxtla waiting with it however, and decided to hit the road without it and continue our adventure.

If we hadn’t had the house hiccup, we were planning to head to the Pacific coast of Oaxaca.  So we decided to go ahead with that plan, taking a bus instead of driving.  The only buses from Tuxtla to the coast of Oaxaca are overnight.  So we decided to head to the town farther west that we wanted to see, Puerto Escondido.  Turns out, overnight buses are worse in your 40s than in your 20s.

We booked an apartment through Airbnb at Casa Losodeli, at its heart a hostel, but now expanding into more private rooms.  We had an apartment with a kitchen which, of course, is vital to our traveling style.  Pretty much everyone else we met there was staying in hostel quarters.  Thankfully we were able to get in early on the day of our arrival and sleep off the overnight bus hangover (which is far worse than an actual hangover). 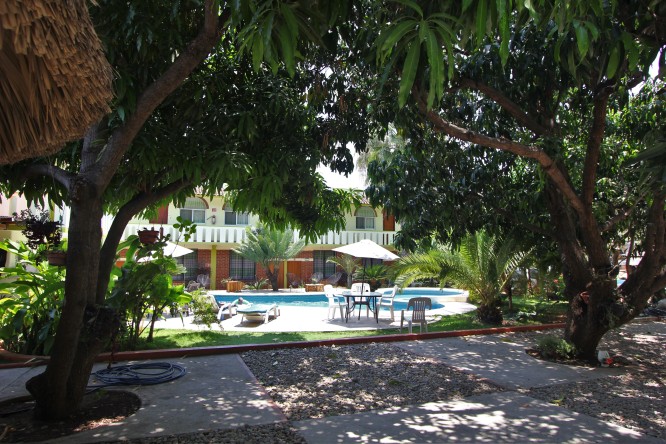 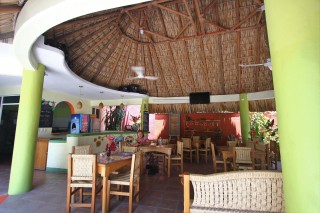 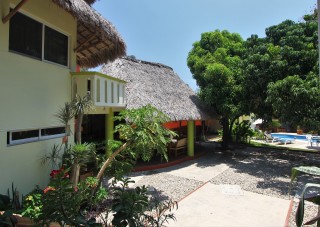 That’s our balcony on the left

We were already traveling together when we first really started traveling (a long long time ago), and so we avoided hostels in favor of budget hotels.  As a result, we didn’t really know what to expect staying in a more youth oriented place than we’re used to.  Other than being slightly disturbed by a group of loud Australians (and was it their fault that we were trying to finish up The Sopranos at 4:00 in the afternoon?) we had really positive interactions with a bunch of nice people, and even made a new friend.

During our stay we met people from Spain, Mexico, France, Germany, Australia, Canada and, of course, exotic Wisconsin.  Apparently we’re not too old to talk to 20-somethings.  Who knew?  Oh, and we met a guy from Brooklyn who got shot in the butt while in Mexico, and kept traveling.  These travelers’ stories make ours seem pretty unadventurous.  It was a good perspective check.

On our way into town, we caught sight of Puerto Escondido’s main section of beach, consisting of a fairly calm beach at the center of town where the port originated, and Zicatela, stretching miles from there to the Southeast.  Zicatela is, it turns out, one of the best surfing beaches in the world.  And, being a place where it is recommended that only experienced surfers even set foot in the water, we looked elsewhere.

Luckily, Puerto Escondido has a few bays nearby with small sandy beaches, some of which are calm enough for snorkeling.  We didn’t really know what to expect of these beaches, as this is our first trip to Mexico’s Pacific coast.

Our first beach, a short walk from Casa Losodeli, was Carrizalillo.  All we really knew was that the beach was down some stairs.  When we started down those stairs, it soon became clear that this was going to be a nice spot:

Apparently, this beach is sometimes good for snorkeling, but it’s also reputed to be a great place to learn to surf.  When we were there, it was it was clearly a better surf school.  But it was also swimmable, the water was very warm, and it was beautiful. 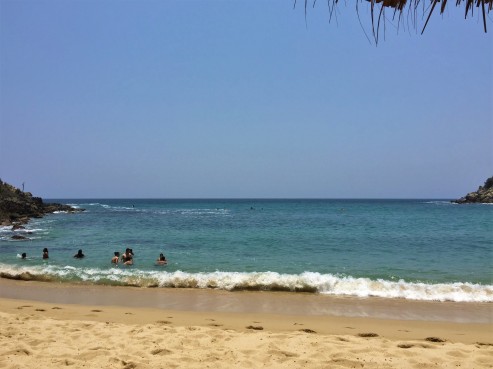 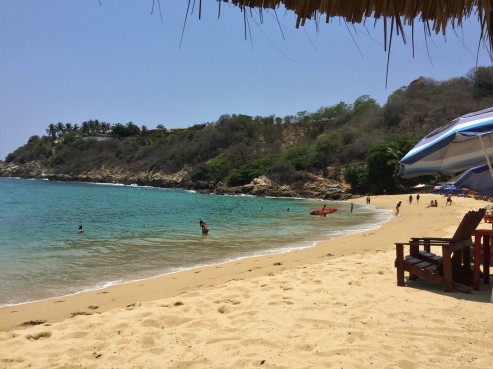 We set down at one of the small beachside restaurants (where everything has to arrive by boat or be carried down 167 steps), swam, ate good ceviche, had a couple of beers, and didn’t snorkel.  But it was a really nice place.

Our next expedition was to Puerto Angelito, another small bay with two beaches separated by a rocky center.  Another beautiful place, also a quick walk from the hostel. 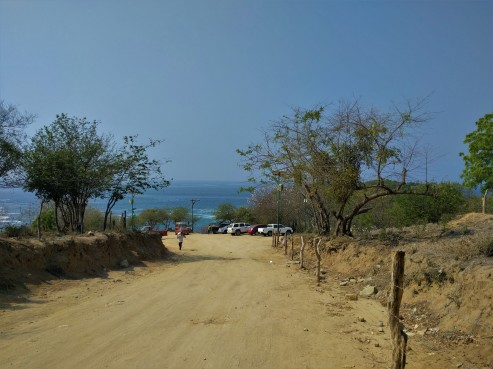 The parking area above the bay 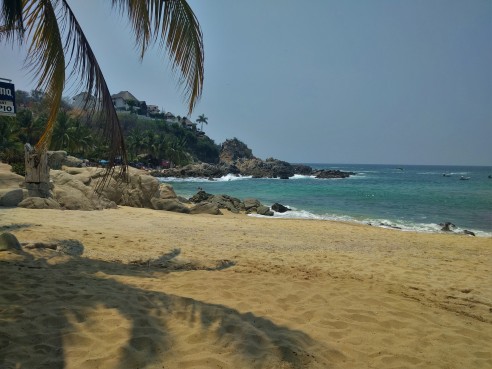 This time we actually put on the snorkeling gear, but the waves were up and the water was quite unclear, so we didn’t stay out long.  We have since learned that waves are high a few days after a full moon, especially in the spring.  Oh, well.

The end of April starts low season in this part of Mexico.  And low season it was.  While our hostel was full of youngsters from around the world, town largely seemed abandoned.  Nowhere was this more evident than on Zicatela.  This is one of the best surfing beaches in Mexico.  Even so, there was no one there.  We saw a couple of people walking on the beach, and a couple of vendors hoping we might buy something, anything.  But you notice this big wide beach empty beach, empty beach chairs, empty (you get the picture). 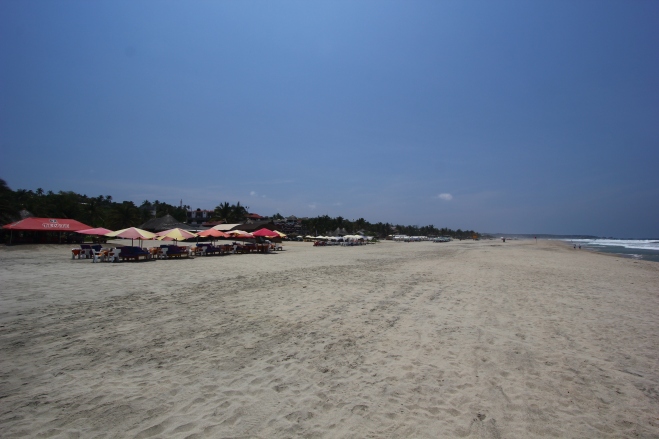 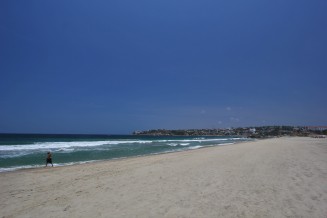 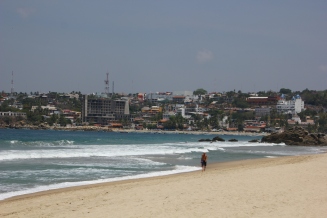 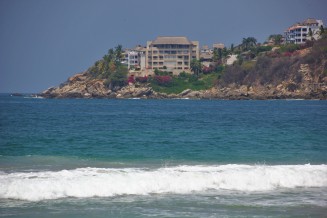 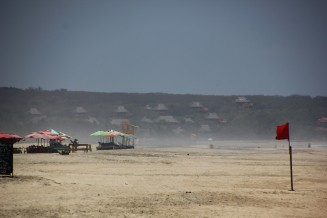 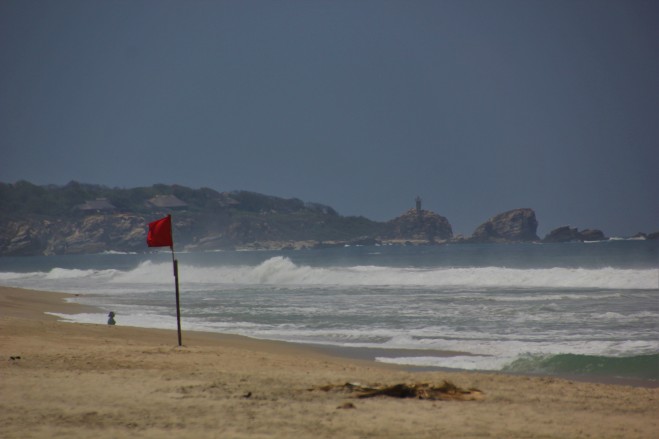 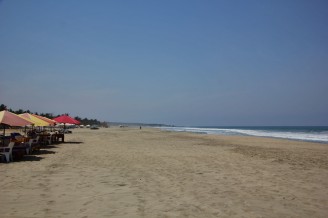 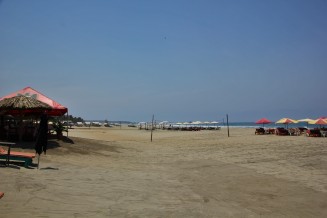 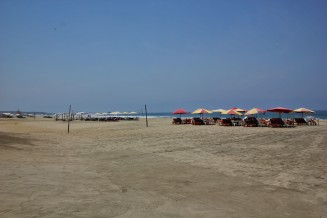 People in town told us that the tourists will be back in July, when the rainy season hits and temperatures drop a bit.  Until then, we were surprised that businesses remained open with virtually no customers.

Puerto Escondido seems like a place that expects to be bigger in the future.  For example, just a few steps from our hostel was what Google labels the Cathedral of Puerto Escondido: 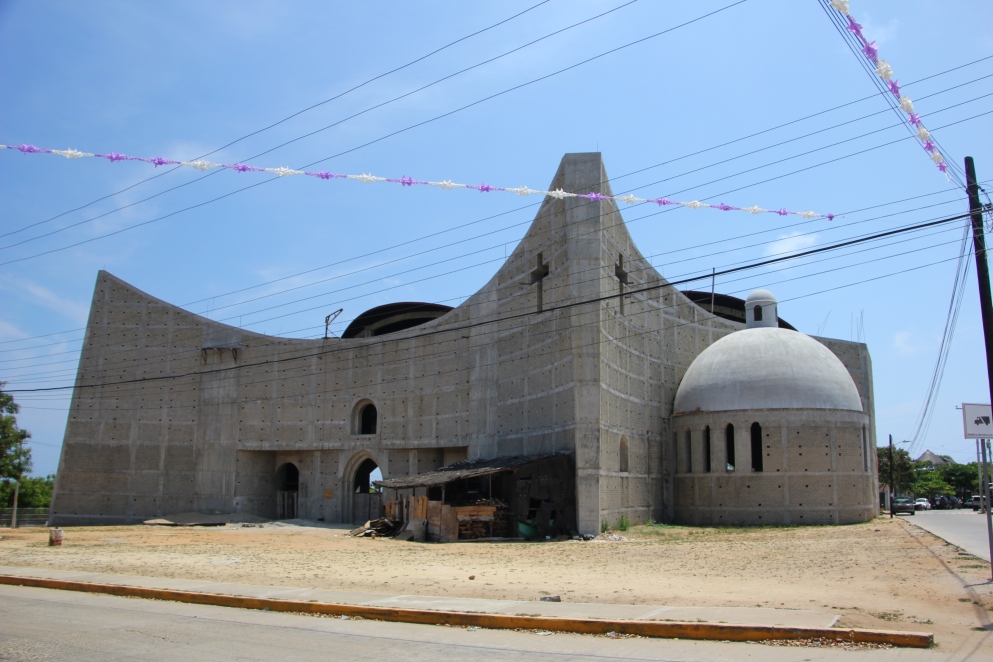 Maybe this will eventually be an operating place of worship, but it’s clear that there hasn’t been any progress lately.  There are also inexplicably wide roads and generally a sense of infrastructure that exceeds current population.  Maybe someday…

As usual we found some good stuff to eat here.  It’s almost always easy to find great food in Mexico, but after a while the usual flavors get a little boring.  So we were happy to find some excellent mediterranean food at El Sultan.

We also had our first smoked fish tacos.  People call this place Smoked Fish Taco on Trip Advisor, and looking at the sign, that’s the name of the place.  No mincing words, in any language. 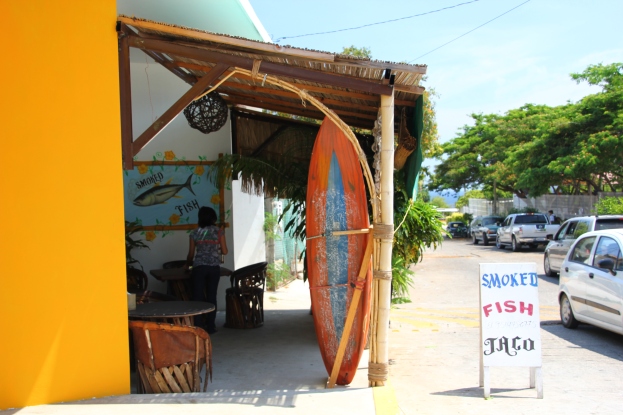 No matter it’s name, there’s no printed menu.  On our two visits (on two consecutive days) they offered just guacamole and 3 kinds of tacos: fried fish, fried shrimp or smoked fish.  The fried was forgettable, but the smoked fish tacos were a thing of beauty – flaked smoked vela (sailfish or marlin) on a hand-made flour tortilla, topped with lettuce, tomato, avocado and seasoned sour cream.  You could gild the lily at the table with dishes of pickled carrots, a spicy habanero salsa and a chimichurri-like green sauce.

And of course we used that kitchen we mentioned…sometimes just to put together a picnic of fresh local produce.

Or we could dip into the mole bins at the local supermarket and come up with something more intense.

Puerto Escondido was a good time and a good introduction to a whole new part of Mexico for us.  The adventure isn’t over – we will spend a bit more time on the coast before going to retrieve the house in Tuxtla.  Stay tuned…

4 thoughts on “Our House in Puerto Escondido”

Leave a Reply to Nina B Cancel reply