May 9, 2016:  Our house remained in Tuxtla, but on Thursday, April 28, we moved two hours east for a different kind of coastal experience. 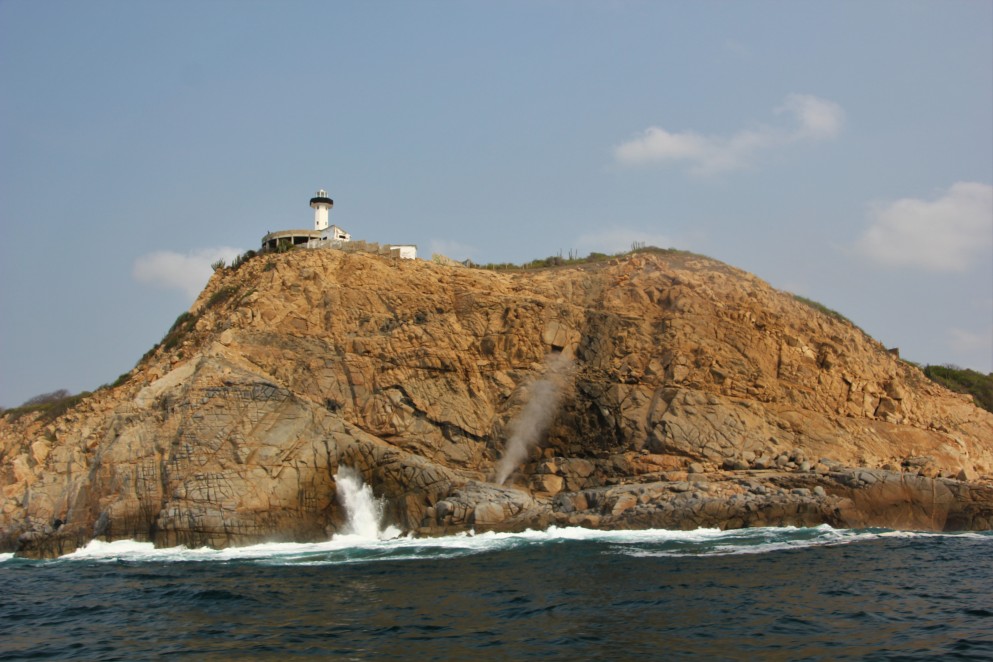 The area of Oaxaca’s coast referred to as Huatulco is a collection of seven bays, Las Bahías de Huatulco.

The area was developed and seems to still largely be run by FONATUR, a national trust for the promotion of tourism.  FONATUR also masterminded Cancun, Ixtapa and Los Cabos. The original 1988 plan called for finishing the development of Huatulco by 2018 with 30,000 hotel rooms spread over 9 bays.  That has not happened.  Today, development centers around the port of Santa Cruz, with its bay, marina, and cruise pier.  About a mile to the north, off the water, is the small town of Crucecita, with big box shops and supermarkets at the edge, and in the center, a nice little square surrounded by the church and modest hotels and restaurants, much like any typical Mexican small town.

To the east of Santa Cruz sit Chahue Bay, with its marina full of luxury yachts, and Tangolunda Bay, where Huatulco’s all-inclusive resorts cluster together.  To the west of Santa Cruz lay a series of bays that once were the target of dense development, but later became Huatulco National Park.  It isn’t clear to what extent the creation of this park was due to a concern to preserve the natural landscape, and to what extent it signals FONATUR’s acceptance of the fact there there isn’t enough demand to see the original grand scheme to completion.

You might say that Huatulco has been a flop in terms of the scale of development intended.  We saw lots of “aspirational projects” and over-development for the current number of visitors.  Streets are wide and well-maintained, if largely empty:

This recently opened path has been cut through the hillside to connect the area of Santa Cruz with Crucecita, the nearby town.  There are plots for commerce along each side of the path, but no signs of commerce: 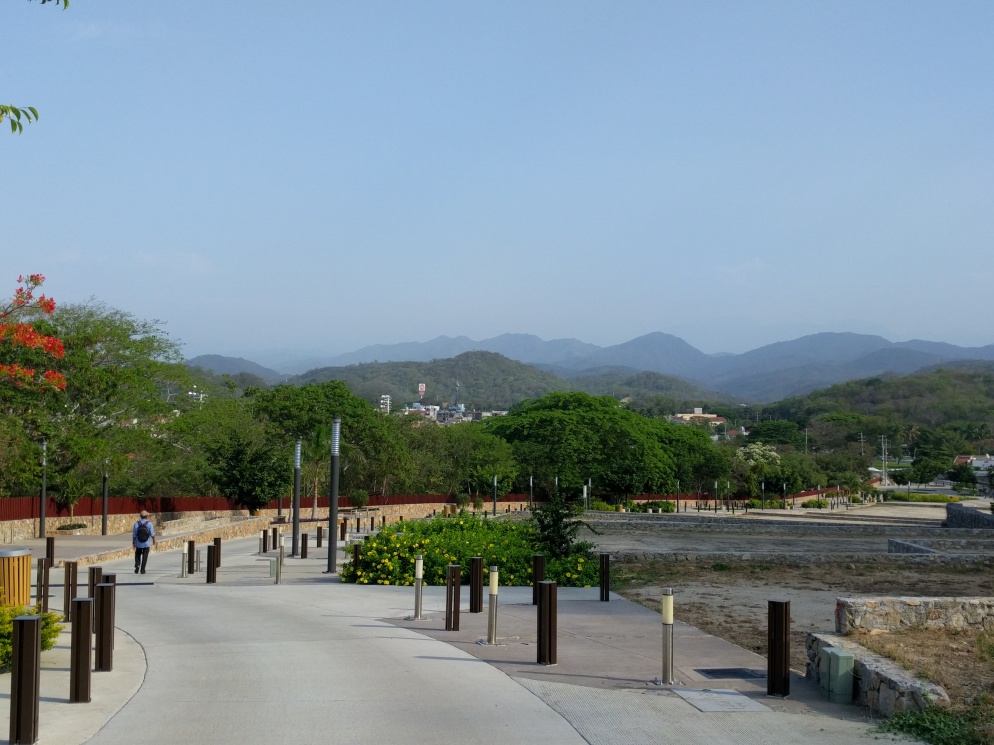 Concrete shells like these are visible all over the area.  Most look like work has been abandoned for quite some time:

Of course, this isn’t anything new in our Mexican experience.  For some reason there seems to be an incentive to get projects started that there aren’t yet resources to finish (like the Cathedral in Puerto Escondido), but we would expect a little more foresight in a major tourist development like Huatulco.  The fact that they keep building new infrastructure while projects like these sit idle is puzzling, but good for the concrete industry.

But, for the most part, the infrastructure in Huatulco is pretty good.  For example, in Santa Cruz, we found these wide manicured concrete paths running the length of town.  Often we were the only people on them, and in many places, they abut vacant lots. 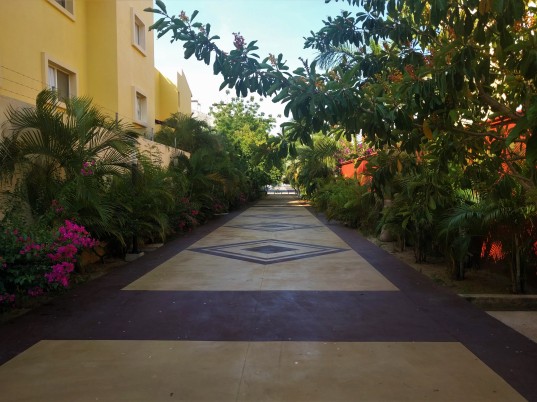 But there is an up-side in this unwarranted ambition for present visitors.  In spite of some efforts to be a partying resort town;

Huatulco is a fairly laid back, quiet, but well-developed area with a number of pristine beaches ideal for swimming and (our favorite) snorkeling.

In Santa Cruz and the bays to the west, we were surprised and delighted to find Pacific beaches with water calm enough for easy swimming and an abundance of marine life.

Several of these beaches are flanked by comedores, beach-side restaurants that all have virtually identical menus heavily featuring local seafood.  That seafood is almost always served with fried tortillas, instead of chips or soft tortillas.  Apparently this is the way it’s done on the Pacific coast.  We haven’t seen it elsewhere in Mexico.

These beach-side restaurants are a little different from such establishments that we’ve encountered in other Mexican beach areas.  Here there are virtually no lounge chairs.  Everyone sits upright, at a table:

At those tables, you will be offered food for sale not just from the restaurant, but from a multitude of vendors offering various snacks (fruit, peanuts, sweets) but also things like plates of shellfish.  These vendors are not associated with the restaurants, but the restaurants make little effort to prevent them from hustling their customers.  One place we stopped by had small handmade signs warning guests not to eat food from the walking vendors due to health concerns.  I doubt anyone gave it a second glance.

While Huatulco does draw a fair number of Canadians in the winter, and the handful of all-inclusives do bring thousands of tourists from all over, it has primarily become a domestic tourist destination, with an estimated 80% of tourists coming from other parts of Mexico.  Domestic tourism is booming everywhere we’ve been, often overwhelming facilities during holidays, as the burgeoning Mexican middle class is growing faster than the tourism industry can (or has had foresight to) keep up.  For example, when we were in Mahahual around Christmas, the town’s ATMs ran out of cash, and the gas station ran out of gas.  Those who had been there the year before say the experience was similar, but with fewer tourists.  The businesses try to expand to last season’s rush, but this season is even bigger.

Domestic tourism is keeping Huatulco alive, particularly now in the low season, when virtually no foreigners come to town.

An interesting effect of domestic tourism on these public beaches is a serious bring-your-own culture, not only at the beach, but even at the comedores. We’re not talking about a bottle of water, or special snacks for picky kids.  We saw tables loaded with coolers of drinks, any variety of food and snacks and even operating grills, all brought from home.  Granted, most people seemed to still be ordering additional items from the restaurant, but again, the establishments seem to embrace this way of doing things.  There weren’t any “No Outside Food or Drinks” signs.  The beach crowds are also much more family activity oriented, loud, and festive, compared to some places we’ve been.

Another thing we’ve noticed about Mexican tourists is that they are, and especially the women, very modest at the beach.  Women regularly cover swimsuits with t shirts and shorts, even in the water.  It really highlights just how inappropriate it must feel to Mexicans to see foreign women on their Caribbean beaches wearing almost nothing on bottom, and even less on top.  It’s interesting how some visitors who consider themselves very worldly and cultured can be so insensitive to local social mores.  But who are we to judge, we probably offend 8 people a day without realizing it.  (And by “we” we mean Michael.)

After a couple of days of exploring on our own, we decided to splurge on a day trip, taking a snorkeling excursion with Hurricane Divers to a few beaches that are either difficult or impossible to access by road.

On the boat, we saw beautiful coastline, lots of seabirds, and at least two species of sea turtles.  And snorkeling from the boat was even better than the great off-the-beach snorkeling we did at Entrega and Maguey beaches.  We hadn’t really heard much positive about snorkeling on the Pacific coast until recently, and expected it to be inferior to the Caribbean, but we were pleasantly surprised.  The water was warm and clear, there were lots of fish, generally bigger than on the other coast, and tons of coral.  On this coast, with more rough seas, the coral doesn’t grow in long branching forms, but more dense plates.  It’s easier to swim over without worrying about running into a branch or fan and breaking it off or getting cut up.

Schools of large yellowtail surgeonfish were most common, and there was an abundance of puffers, mostly guineafowl puffers.  We also saw cormorants fishing, which was very interesting to see underwater.  Unlike most fishing birds that plunge in after prey they see from the air, these birds swim along the surface, then dive down like skin divers, searching around rocks and coral for their prey.  Their bodies are elongated while they’re swimming, and they look more like eels than birds underwater.

Over the weekend, Huatulco hosted a sport fishing tournament largely dedicated to catching sail fish.  There were three days of music and fun. 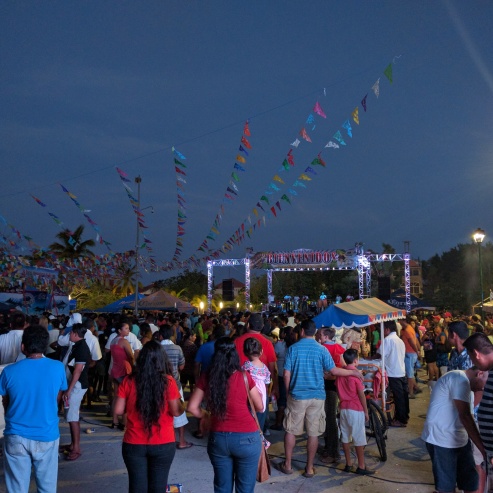 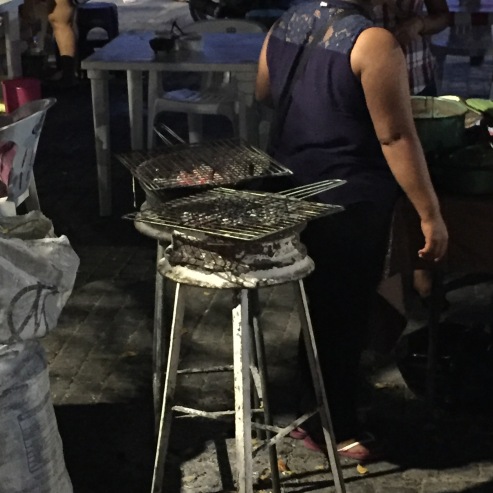 Always recycling, the grill is made from a wheel.

Local police were present to make sure the fun didn’t get out of hand:

In addition, the weekend we left Huatulco they were hosting a triathlon, and participants could be seen around the area running and biking, in pretty impressive heat and humidity.  While it is low season, and the condo building we stayed in was virtually empty, the place is far from dead.

Near the end of our week we spent a half day off the water, visiting the Parque Eco-Arqueológico de Bocana Copalita (Copalita EcoPark and Archaeological Ruins).  This is a very modest ruin site, 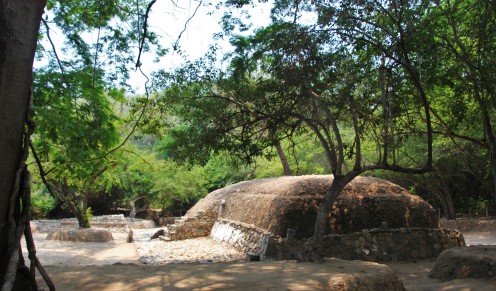 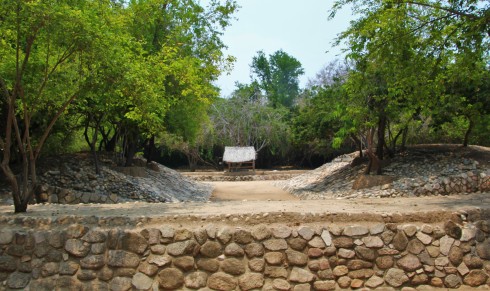 but it has a nice little museum 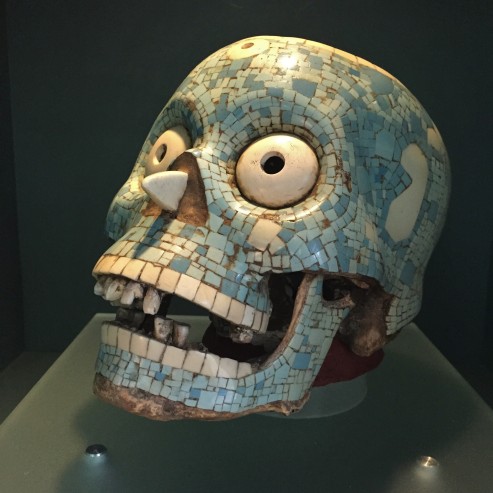 and some manicured paths through the jungle where we saw some local fauna.

It also has a path along the coastal cliffs:

We were lucky to get some close fly-bys from sea birds playing in the updrafts at the edge of the cliffs. 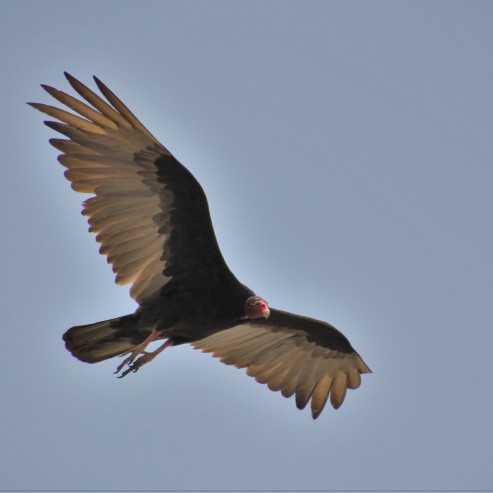 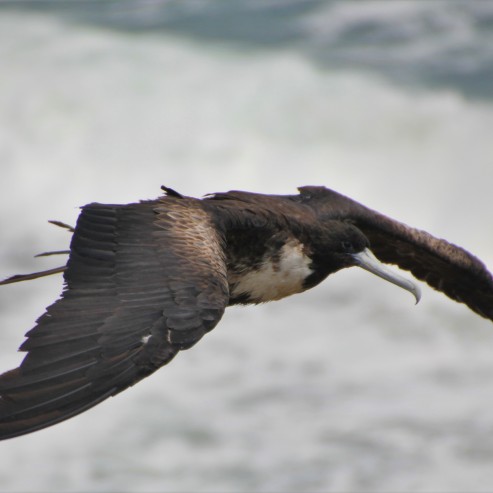 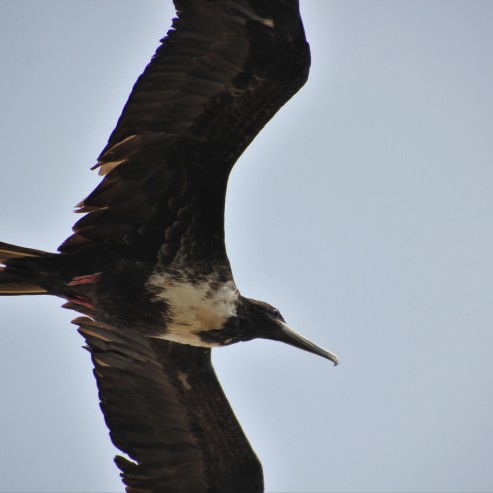 The views from the cliffs were well worth the trip to the park.  But bring water, it was hot, and there were no refreshments available.

We stayed in a pretty nice condo that we found on VRBO.  Being the low season, you can get a lot of bang for your buck.  The kitchen was fully equipped, including this microwave.  Note the preset buttons:

Also, here’s a fun discovery that doesn’t really fit into the narrative:

We liked the coast of Oaxaca a lot, probably more than we expected to.  But now it’s time to go back to Tuxtla where (hopefully) our house will soon be ready to hit the road.

Thanks for checking out our adventure.  We love to hear your feedback!

3 thoughts on “Our House in Huatulco”