March 8, 2019:  Yes, we got distracted again.  But we need to tell you about the rest of our adventure in Colombia.  Arguably the most beautiful part.

After high altitude Bogotá and coastal Cartagena, we stopped in the middle: Colombia’s coffee region, El Eje Cafetero.  This region, located some 180 miles (300 km) east of Bogota, produces most of Colombia’s coffee.

We made the small town of Salento our home base for exploring the region.  Salento is listed at an elevation of 6217′ (1895 m), but being so mountainous, the actual elevation of the different parts of the town and the surrounding region varies quite a bit.  For example, the hike of the nearby Cocora Valley (which we’ll discuss later) starts at an elevation of about 7875′ (2400 m) and our rather casual partial hike ascended another 800 feet or so.  On the other hand, we walked to a nearby coffee plantation which was approximately 400 feet below the elevation of the town.  The town itself varies by a couple hundred feet over the course of a few blocks.

Salento is pretty popular on the backpacker circuit, so there is an abundance of hostels, both traditional, and what appear to be small old hotels rebranded as hostels because apparently that’s where the market is.  We chose La Serrana, outside of town.  It comes highly recommended, in large part because of its incredible setting:

Also highly recommended are its family-style dinners, allegedly served each weeknight in the dining room.  During our stay of several nights, there were no dinners, either because there weren’t enough guests at the hostel or because the cook didn’t show up, depending on which staff member was explaining the situation.  This was particularly annoying, as it was not disclosed until arrival, they had no other food service, and we were about a mile out of town.

Our room, and 3 others, were in the right side of this building, separated from the main hostel building.  On the right side is the kitchen and dining room where breakfast was served: 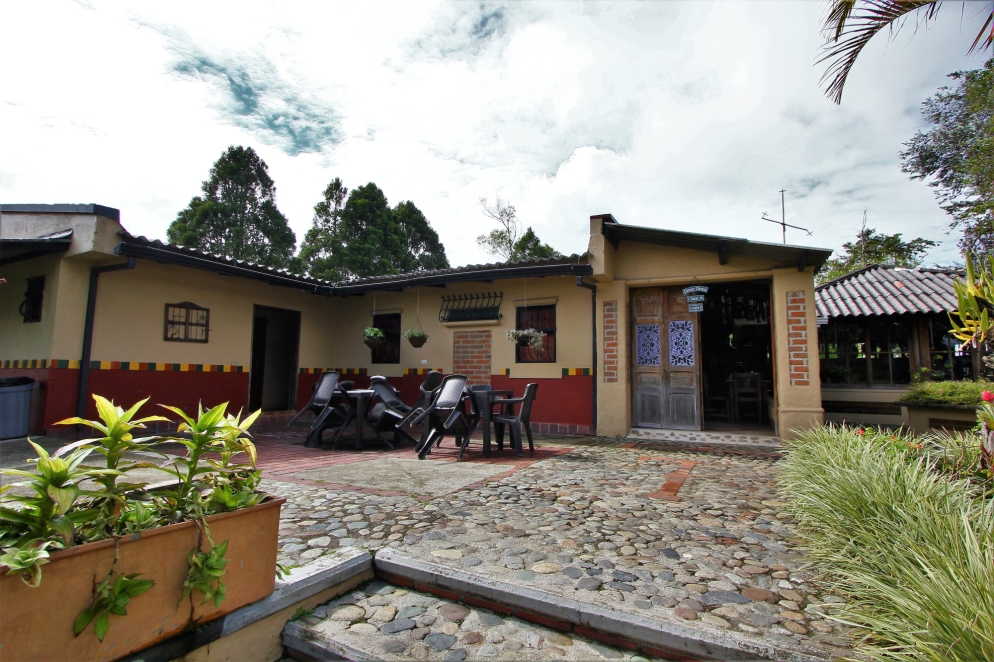 No matter the unexpected lack of dinner, it was still a beautiful spot, filled with flowers and scenery and an easy walk to and from town. 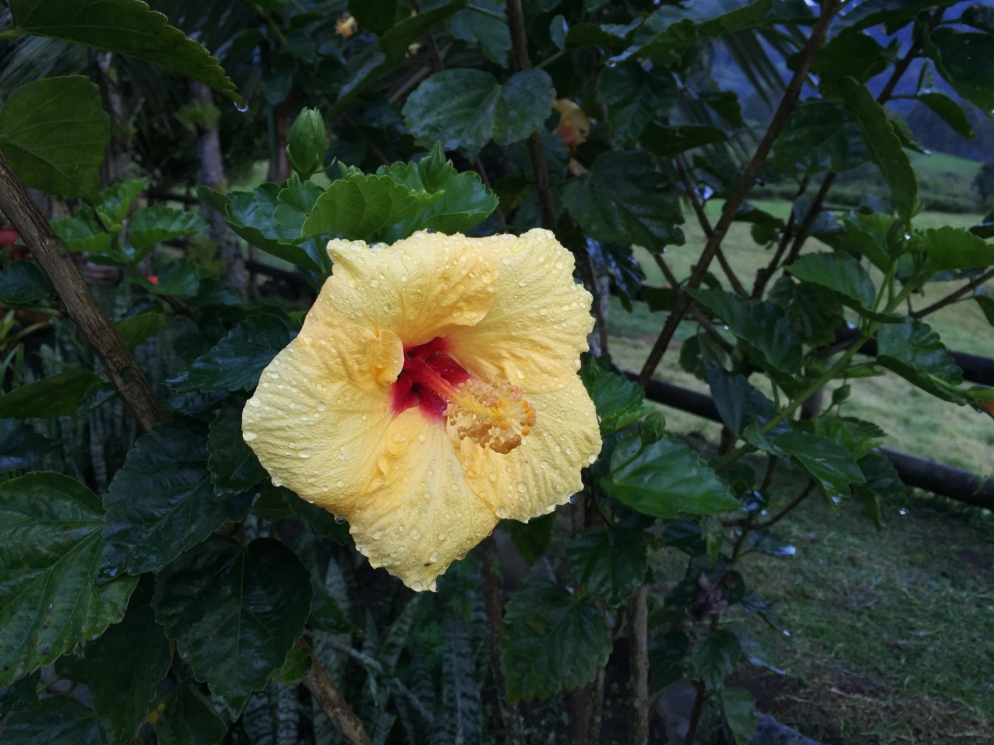 We had amazing views right from our room.  (Private room separate from main hostel building, shared bath with 3 other adjacent rooms, though most nights we were there we had no neighbors.  Just under $15/night with basic breakfast.) 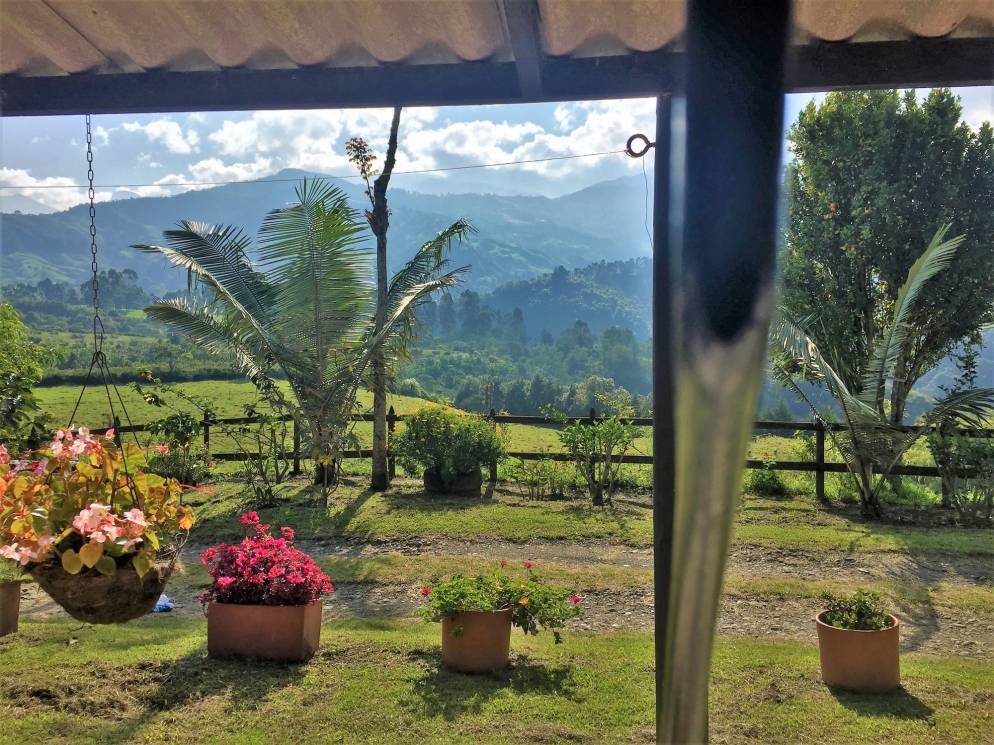 Another advantage to La Serrana over staying in town was its proximity to nearby coffee farms.  At our first breakfast, we met a Kiwi radiographer returning home from several years living in London.  It was nice to meet someone at the hostel approaching our age, and we all decided to check out a coffee farm together.  We don’t have any pictures of her, so you’ll have to trust us.  We made a friend.

We set off down the hill (the elevation at La Serrana is a bit too high for coffee’s taste) to visit one of the farms.

The scenery along the way wasn’t bad. 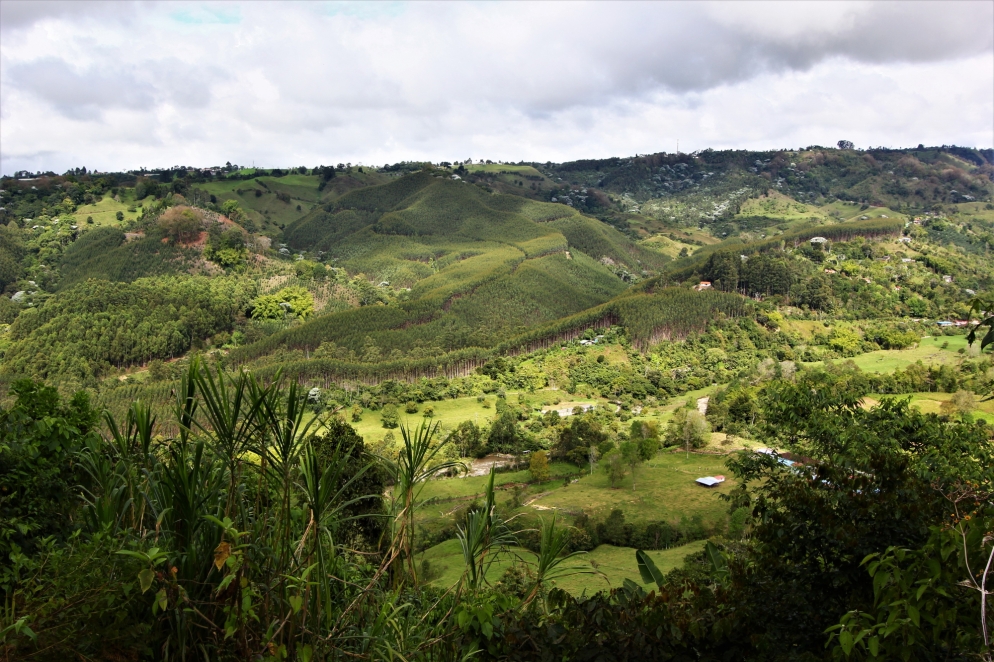 We chose to visit El Ocaso.

We arrived a bit early for the tour, so we hung out on the patio and did some bird watching. 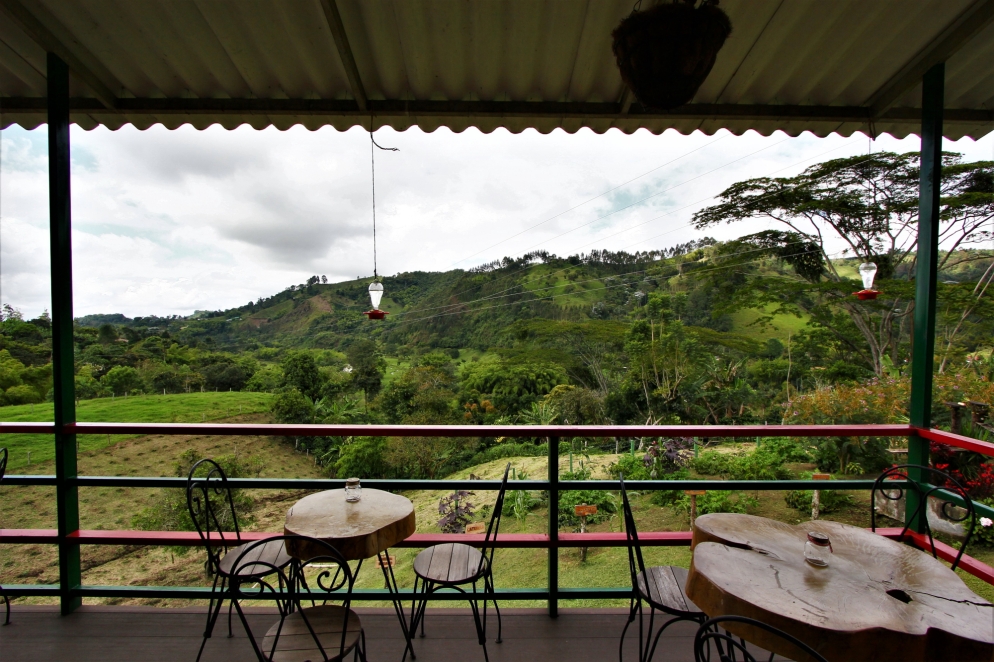 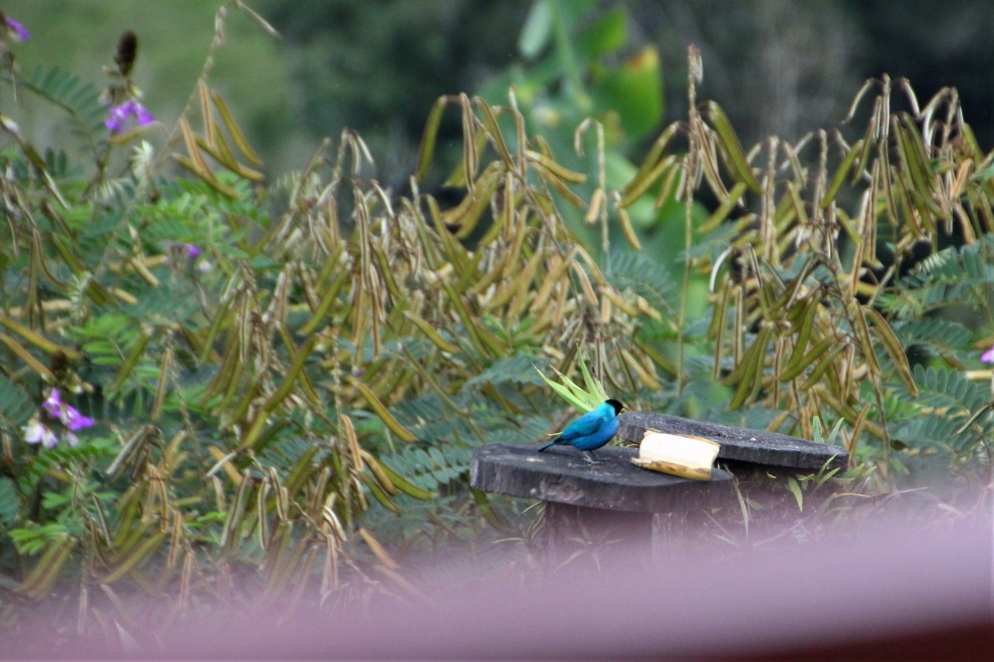 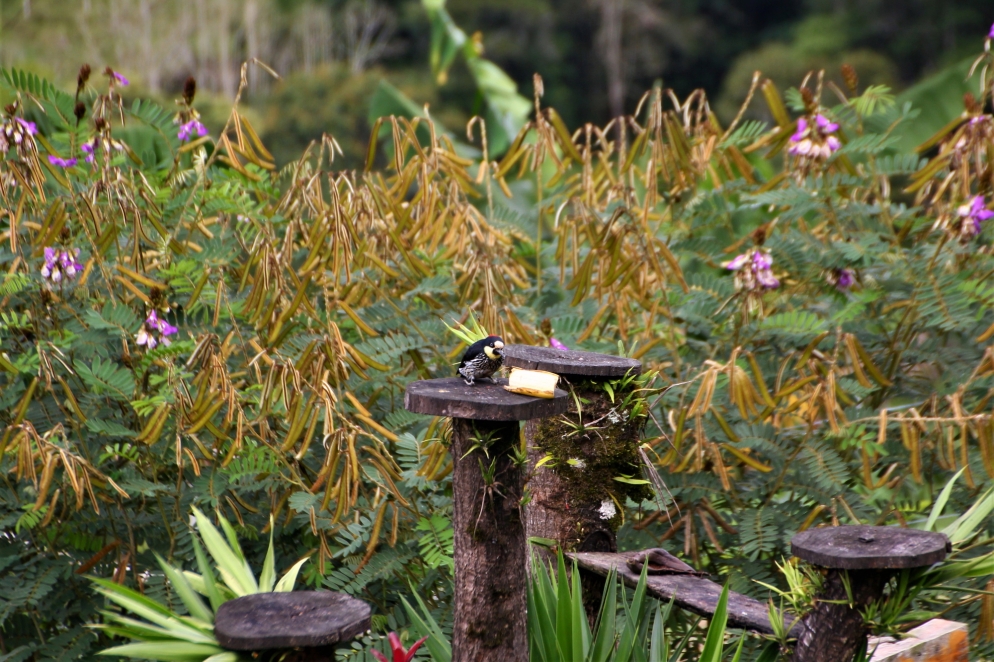 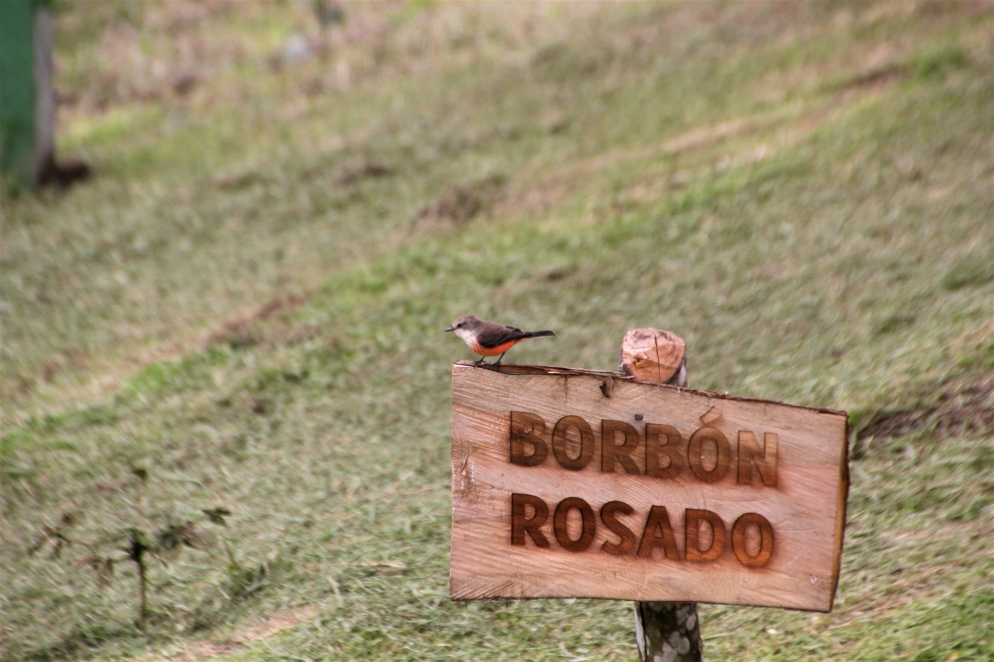 The tour took us through the entire coffee cycle, from planting to harvest to processing the coffee cherries.

It seems that we were pretty excited about getting to pick some coffee!  Photo credit to our new friend Meghan. 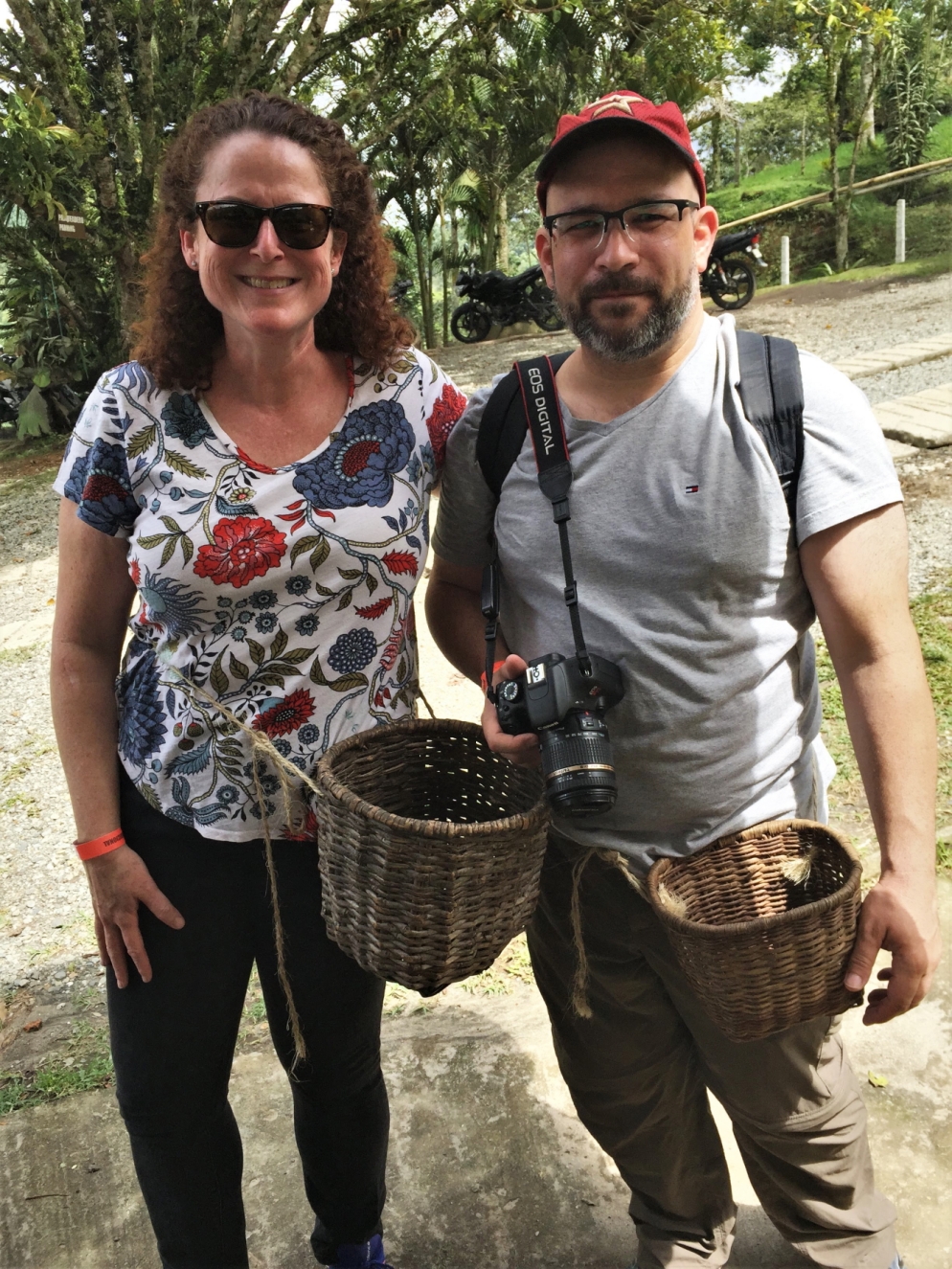 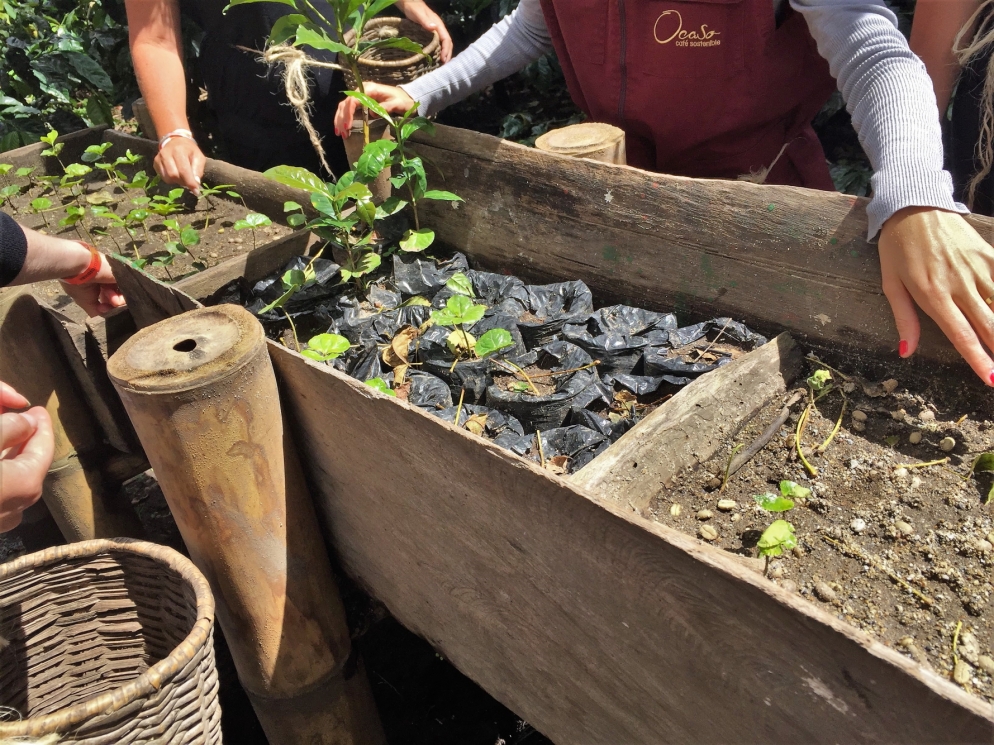 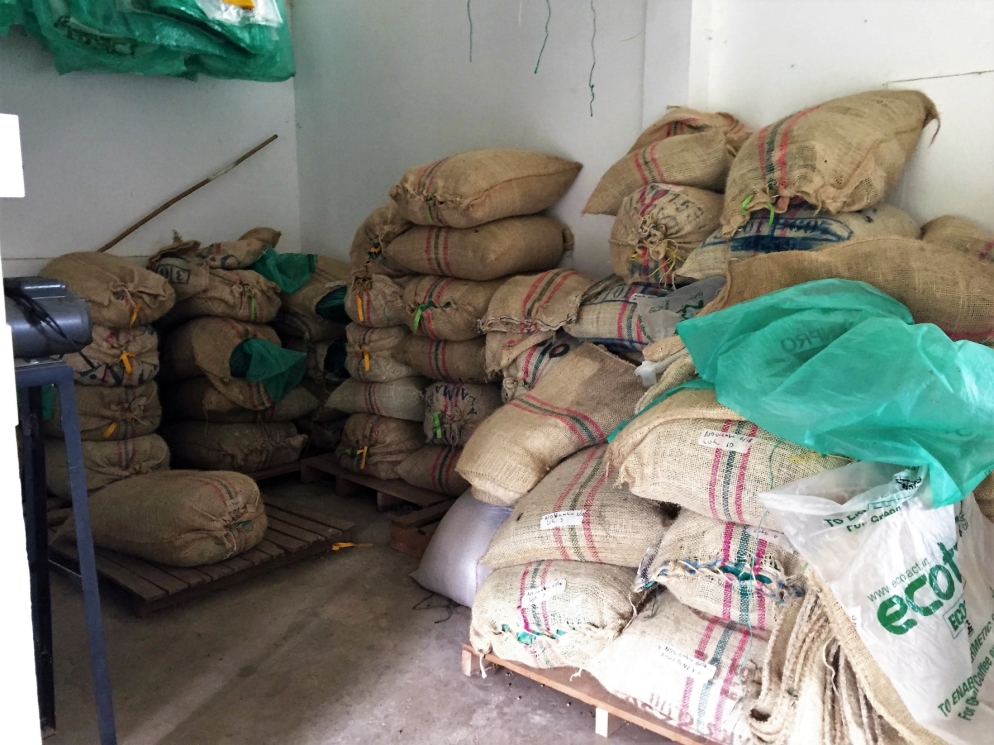 And of course the tour ended with a taste of the farm’s production.  To be honest, we thought that it was not great coffee, incredibly bitter.  But we enjoyed the overall experience and particularly the birds and scenery.  Talking to our quite excellent tour guide after the tour was over, we were surprised to learn that she is another Venezuelan refugee, having only been in Colombia a few months, and having no prior experience with coffee production. 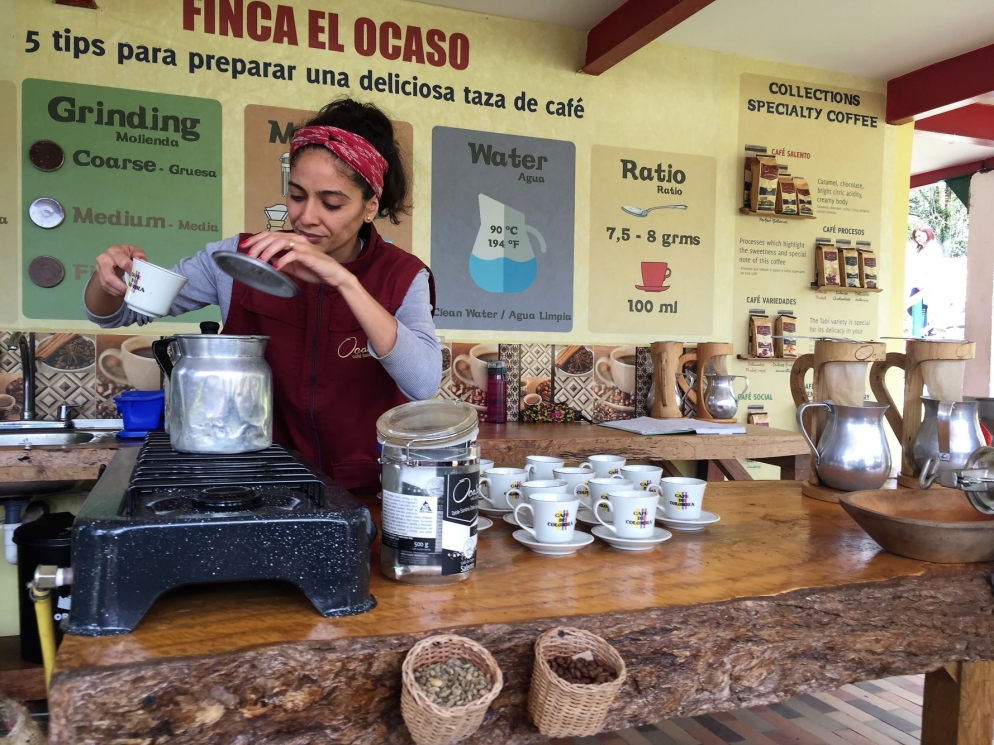 The town of Salento, like so many, is centered around a plaza surrounded by a church, government buildings, and shops.  Salento is flat for approximately one or two blocks in every direction from the plaza, and then gets quite hilly.  We were there in early December (yeah, we’re behind) and Christmas season decorations, practically a national obsession, were abundant. 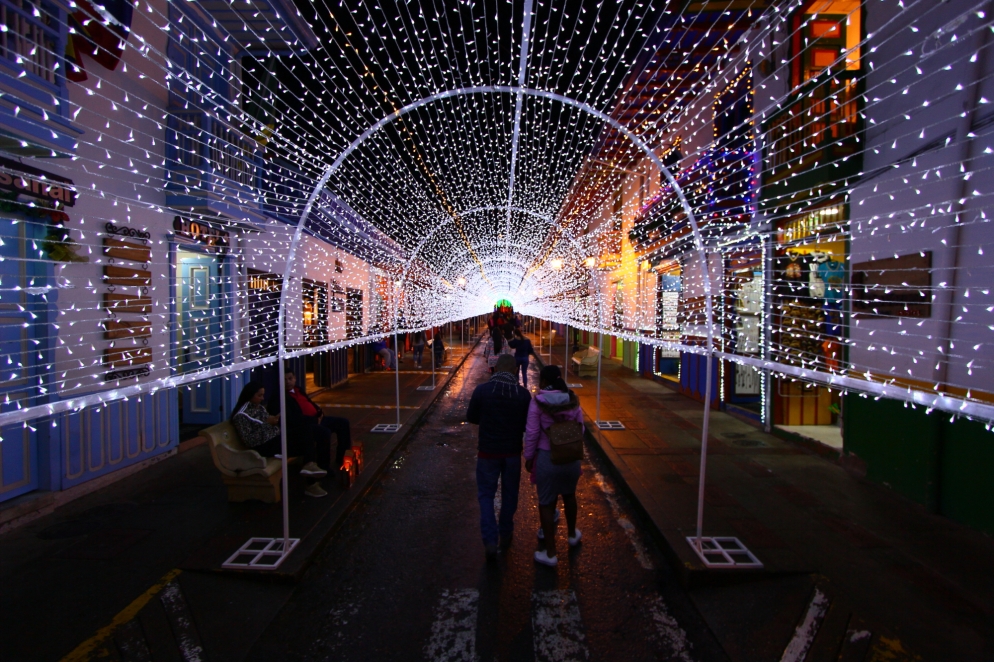 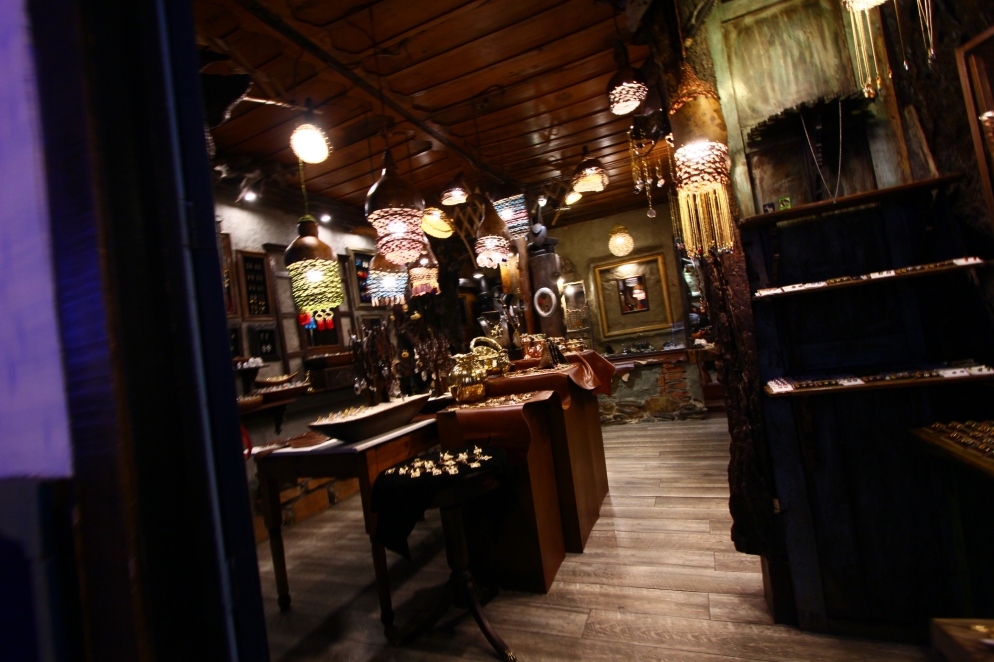 An interesting quirk of Colombia’s coffee country is the their love for Jeeps.  Often referred to as Willys, the company that made the Jeep until the 60’s, these vehicles are ubiquitous, particularly as local taxis, which makes a lot of sense considering the mountainous dirt roads.  There’s a cab stand in Salento’s plaza, and they can be called for pickups elsewhere.  The typical Jeep has been modified with a couple of benches in a soft covered back seating 4-8, plus an extended rear bumper for 2-4 adventurous folks to ride on outside.  Each is uniquely customized.

Few Willys are as customized as much as this one, however: 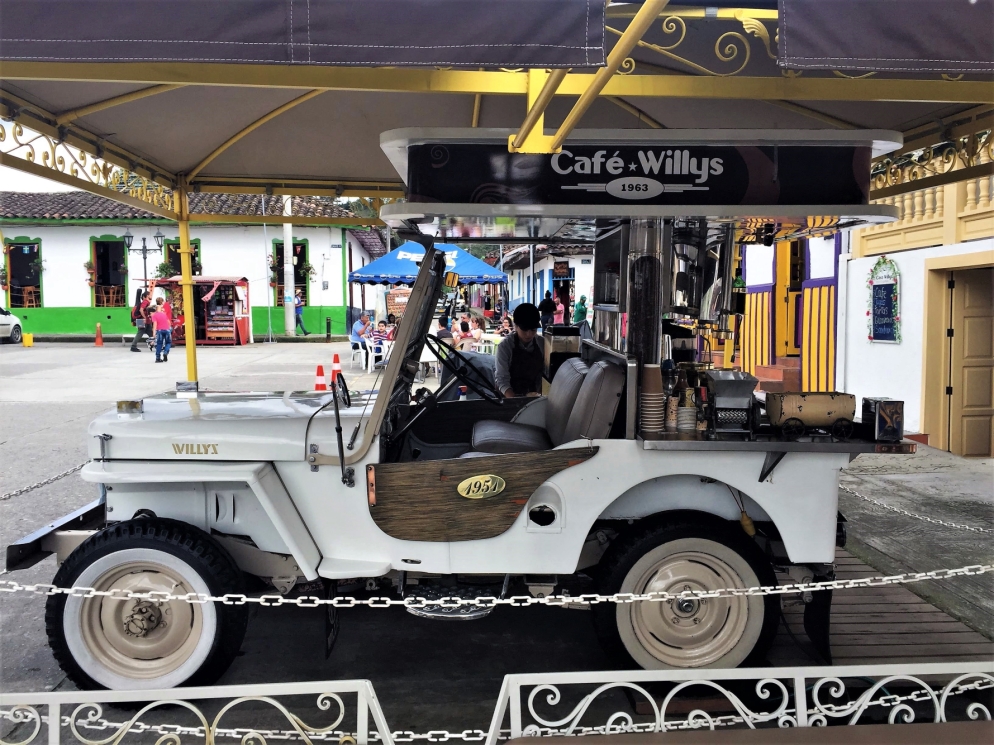 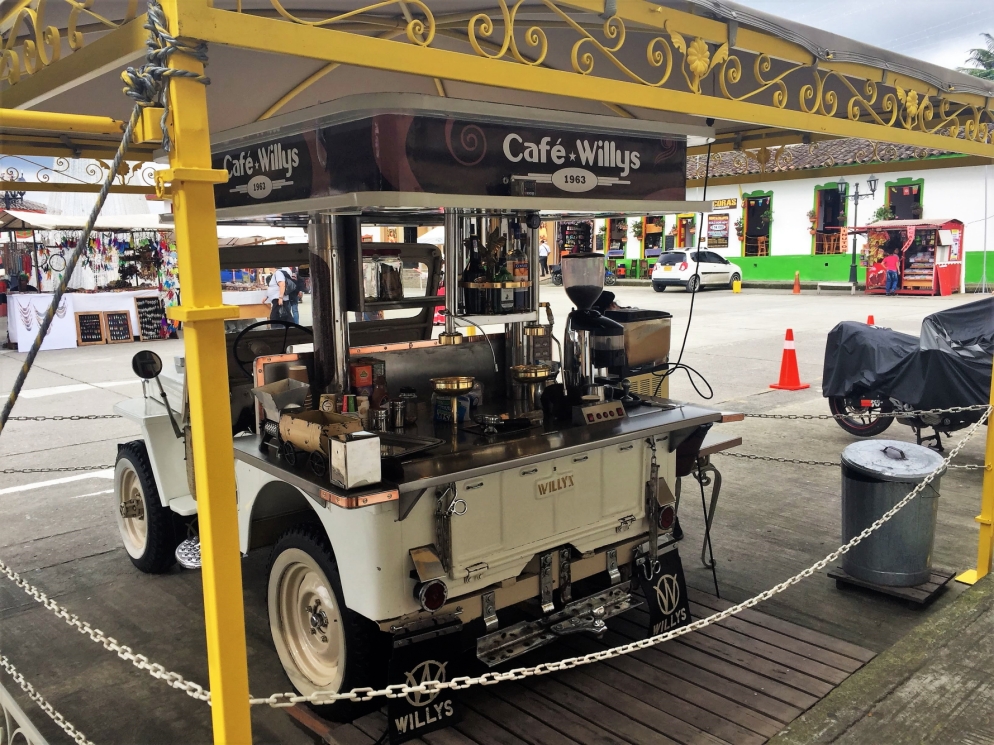 We even saw kids getting their own Willys rides around the plaza.

While you’re in the plaza, you might as well get a healthy snack.  Fruit is everywhere in Colombia.  And it’s really good.  We encountered several fruits we’ve never had before, as they don’t get exported.  The locals will be happy to help you out.

We happened to be in Salento for El Día de las Velitas (day of the little candles).  On the night of December 7, Colombians traditionally celebrate the Virgin Mary and generally kick off the Christmas season, placing small candles outside homes and businesses.

It was no great surprise to see candles in the form of Jeeps in Salento.

We also got to see this bride and groom leaving their wedding in a classic VW Beetle. 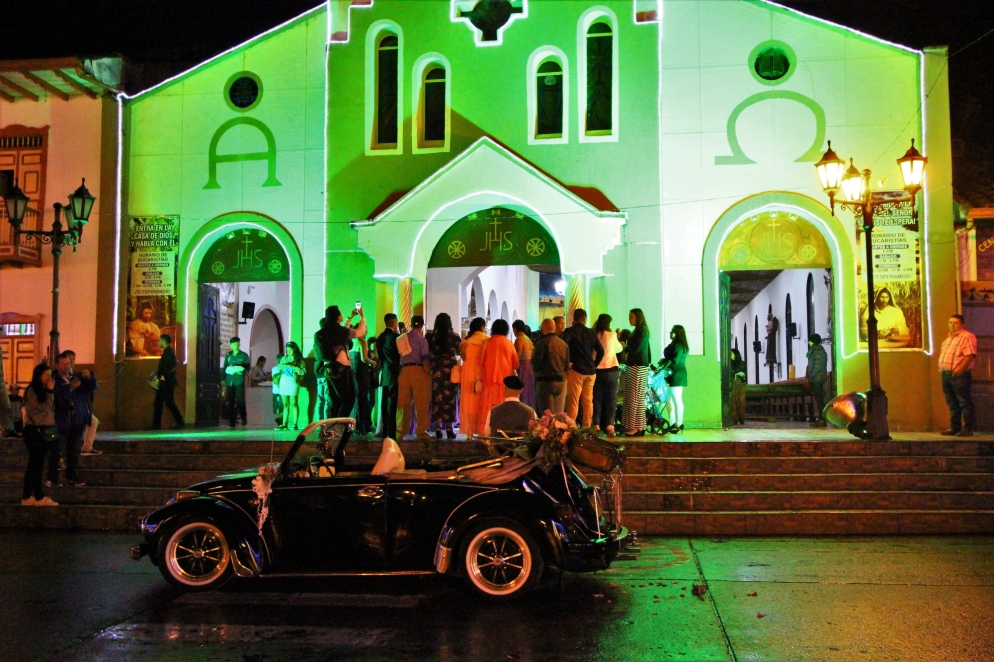 After spending most of a week at the hostel outside of town, we decided to spend our last few nights in Salento at a place closer to the action.  We really splurged with the Salento Pequeño Hotel, at nearly $45 a night!

The hotel really is pequeño.  It only has 4 rooms.

The view of town: 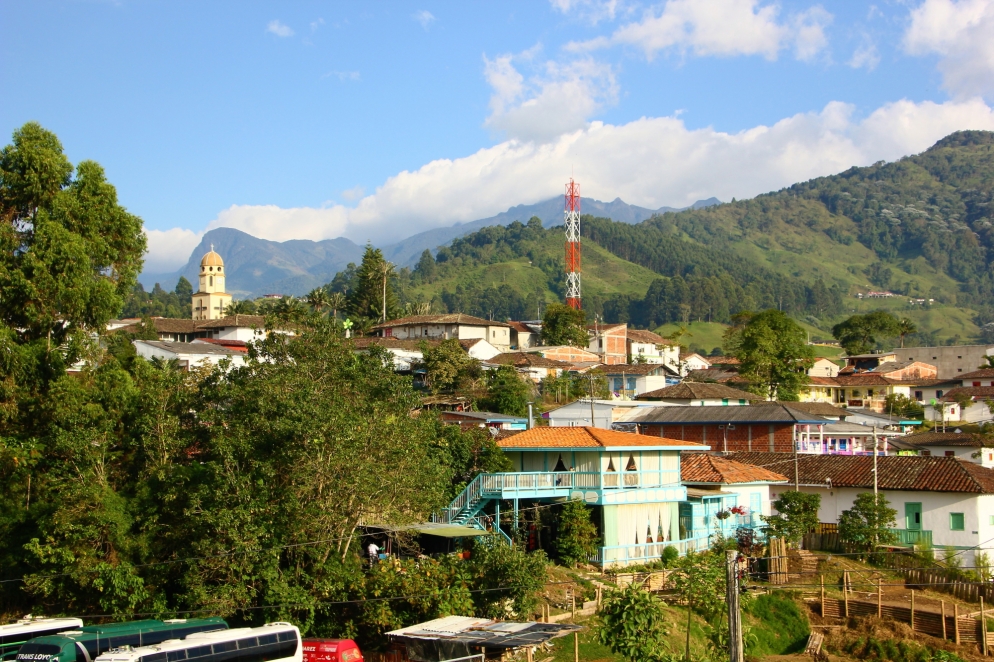 The hotel was really comfortable, and felt like an extravagance, with a large, covered deck overlooking the town and surrounding mountains. 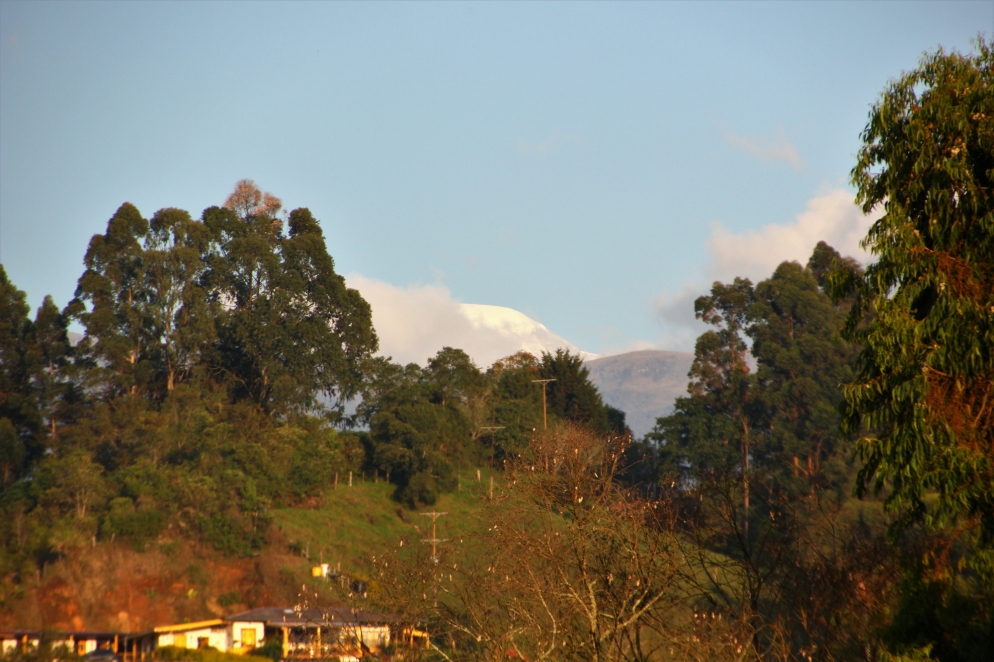 And because there was no common space, the staff brought our included breakfast to our room.  It was enough for 4 people.

On one of our last nights in Salento, we had to check out the game of tejo.  We knew about tejo from watching Anthony Bourdain play it on Parts Unknown (we miss that guy).

In tejo, players throw weighty stones at a pile of clay, where they sink in with a satisfying thud.  Sounds fun so far?  On this clay is a ring of steel, and onto this ring are placed small triangles of paper filled with gunpowder.  If your stone lands just right and crushes the paper against the steel, there’s an explosion.  Although the game is scored somewhat like horseshoes, explosions are the real object of the game.  A crack, a flash of light, and a cloud of smoke.  Everyone in the hall turns to look.  It’s exciting.  Also, you drink beer while playing.  Why isn’t this game played everywhere? 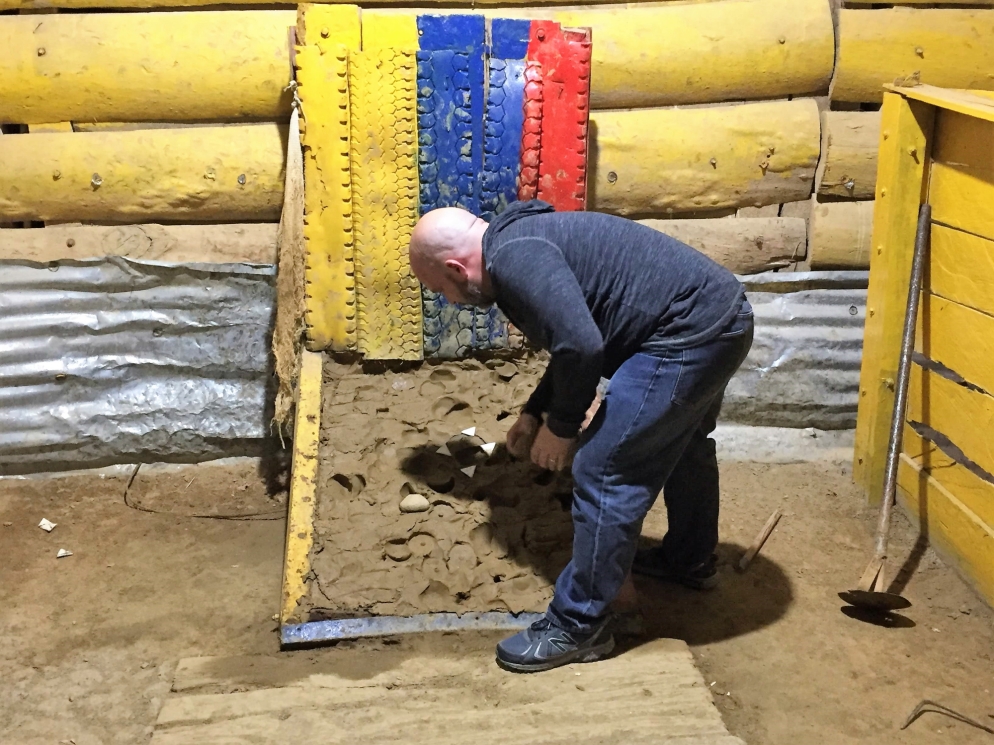 The results of a more feeble connection.  Normally there’s little left of the paper.

They set up tourists and other newbies throwing half court.  We did see a couple of guys throwing the full court.  It was hard to judge the distance indoors, but getting hits from that distance would require more than a little skill and experience.

The other major activity we did while in Salento, and probably the reason most tourists go there, was to hike in the Corcora Valley, and see its famous wax palms, a high altitude Andean palm.  According to Wikipedia, they grow at elevations between 6,600′ and 10,200′ (2,000 and 3,100 m).

For once, we did a good amount of research about the hike before we got there.  Lonely Planet told us that it was a great hike, no problem.  But then we started reading the accounts of bloggers of various ages and fitness levels.  Their perspectives varied, but there was a common theme:  mud.  Not just a little mud, but mud up to your knees, sucking off your boots.  Everyone in town seems to rent knee high muck boots for hikers.

The blogs of previous travelers, as well as conversations with fellow travellers who had just finished the walk, let us to understand that there are two parts of the hike.  The first part is out in the open, and covers the beautiful terrain for which the valley is famous.  The second part of the hike ascend into the high rain forest, and a world of mud.  Call us unadventurous, but we pretty quickly decided that we weren’t interested in mud as an experience.  We opted for a modified hike that allowed us to take in the beauty of the wax palms, but avoid the mess.

We took one of the ubiquitous Jeeps from the Salento plaza, about a 20 minutes drive to the valley.  The scenery on arrival made the trip worthwhile, even if we hadn’t bothered with the hike.

The first part of the hike is a nice flat road. 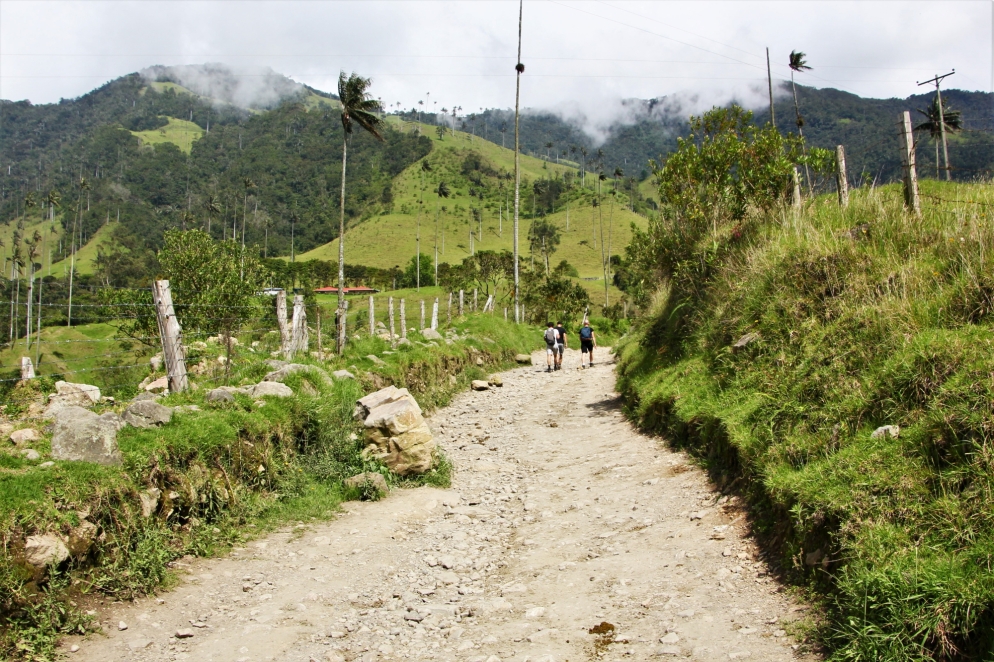 Here, where the trail departs the road, Jeeps are waiting for folks doing the valley on horseback, another popular way to explore.

The incredible scenery of this valley is artificial, and temporary.    Normally wax palms grow in the high Andean rainforest.  When this valley was cleared for grazing,  these palms were spared the axe.  The trees that we’ve photographed are old.  There aren’t any small or medium sized trees.  When these are gone, this scene will be no more.

Among the wax palms, livestock graze, eating any tiny wax palms that shoot up. 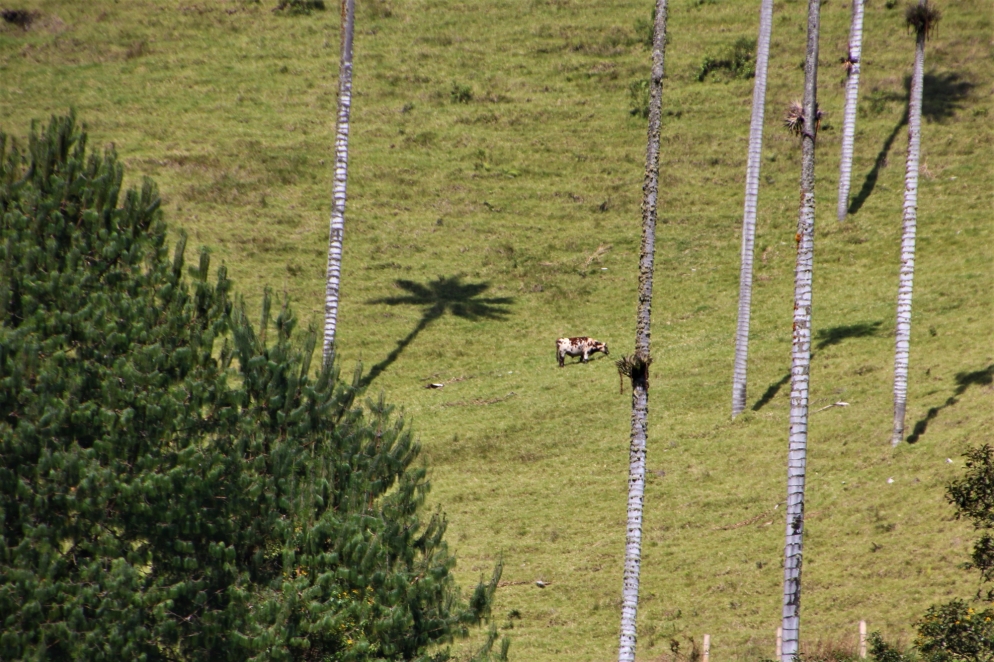 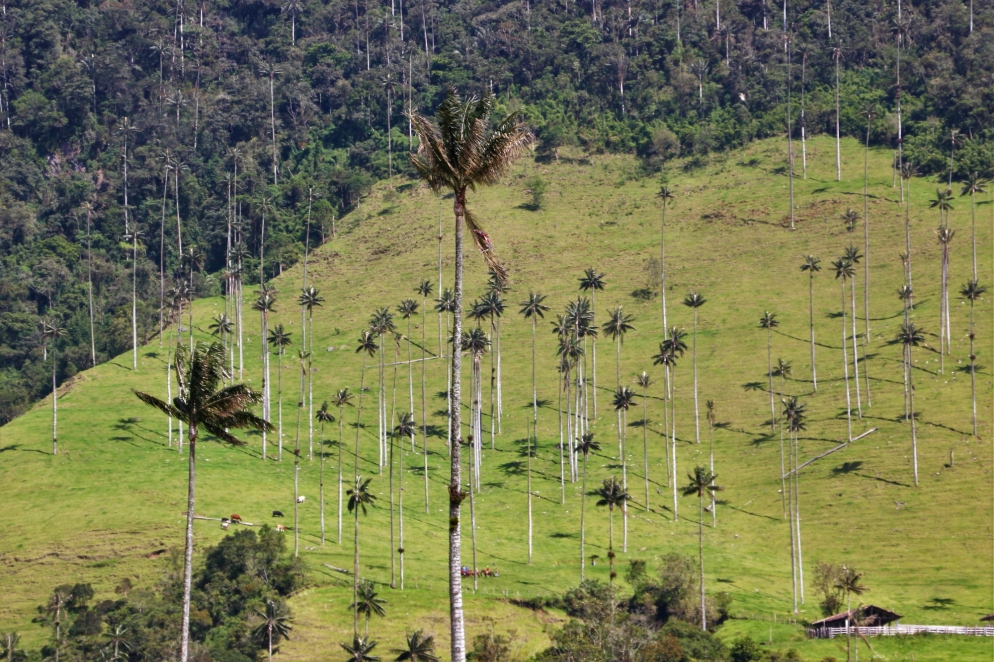 Here are some of the people touring on horseback that we mentioned earlier.

It’s hard to convey how enormous these trees are…they are really big.  In fact, they are the world’s largest species of palm.  They can reach heights of 60m (200ft). 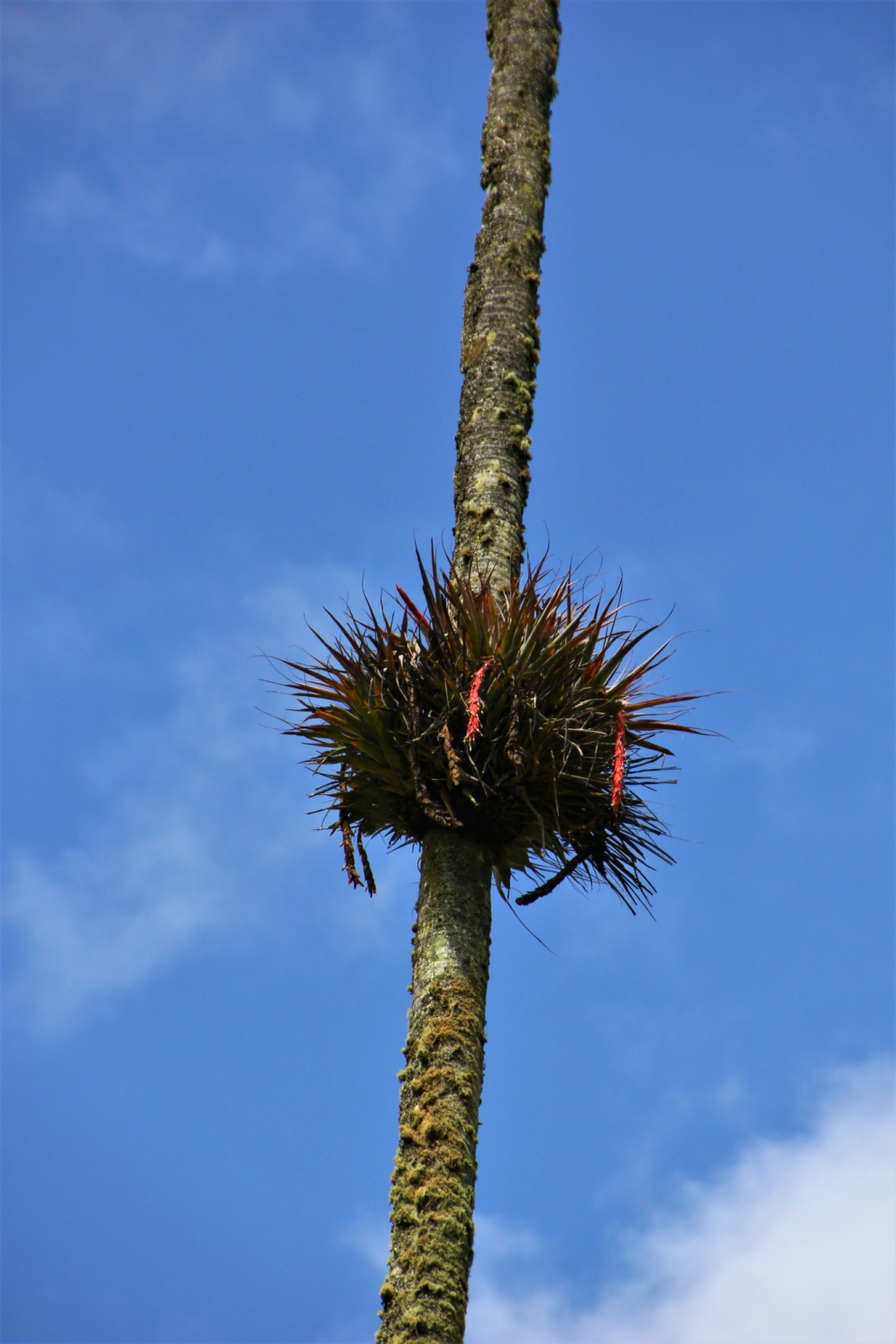 The scenery really was incredible.  Our selfie skills were not. 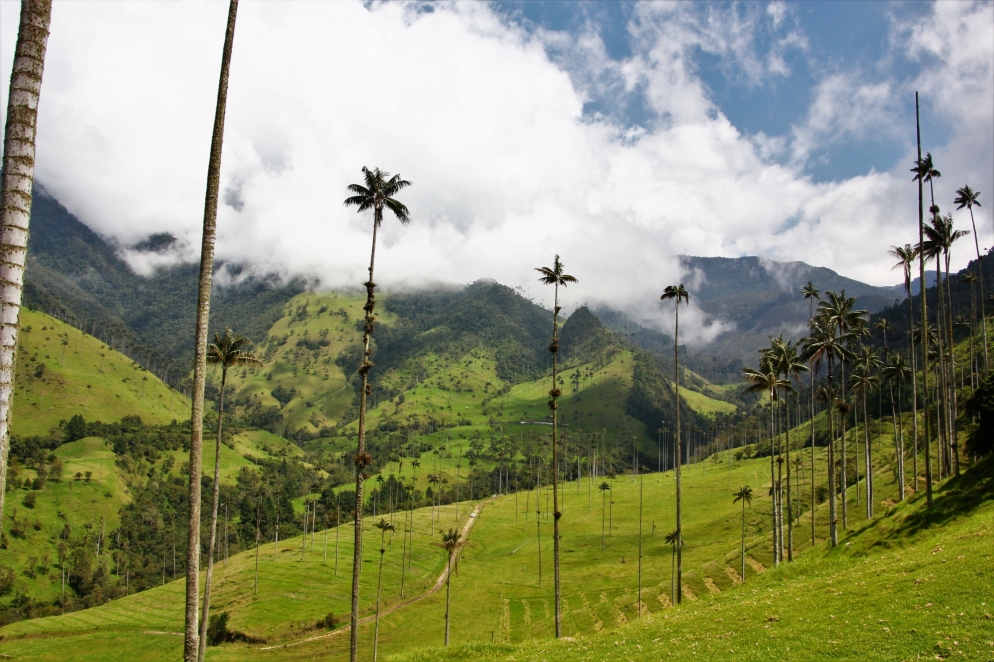 The other large things you see in the Cocora Valley are Andean condors.  These birds are considered the largest flying bird in the world and are the world’s largest raptors.

This ridgetop (approx. 8520′, 2600 m), covered by a short, spongy grass, was a great place to hang out for a while, take in the sights, and take a few pictures.  Other people thought so too. 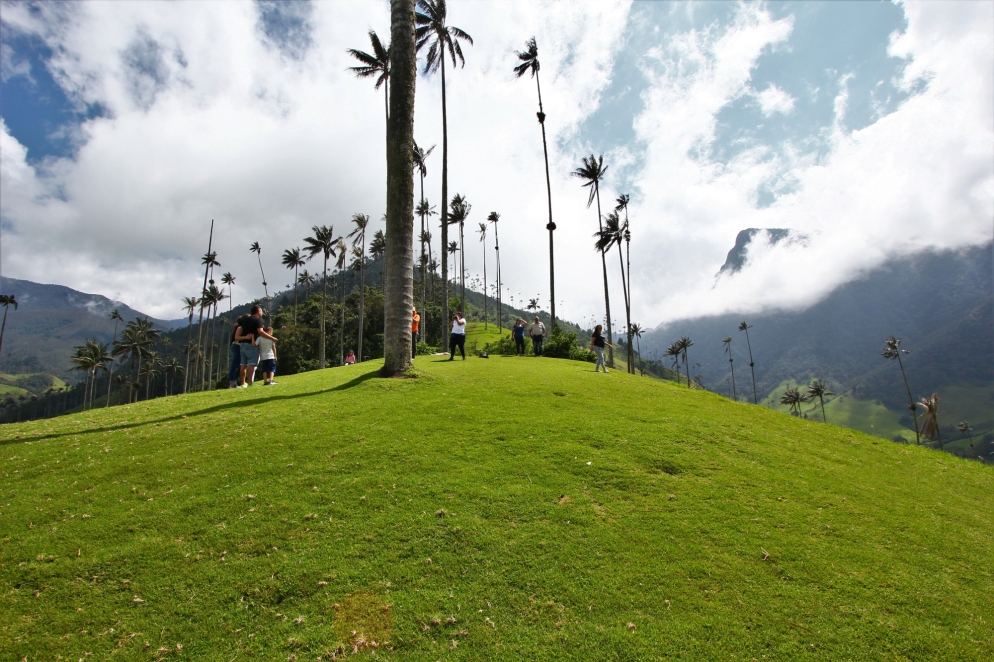 It was also where we decided to call it, and head back down.  We took a more direct, and pretty steep route. 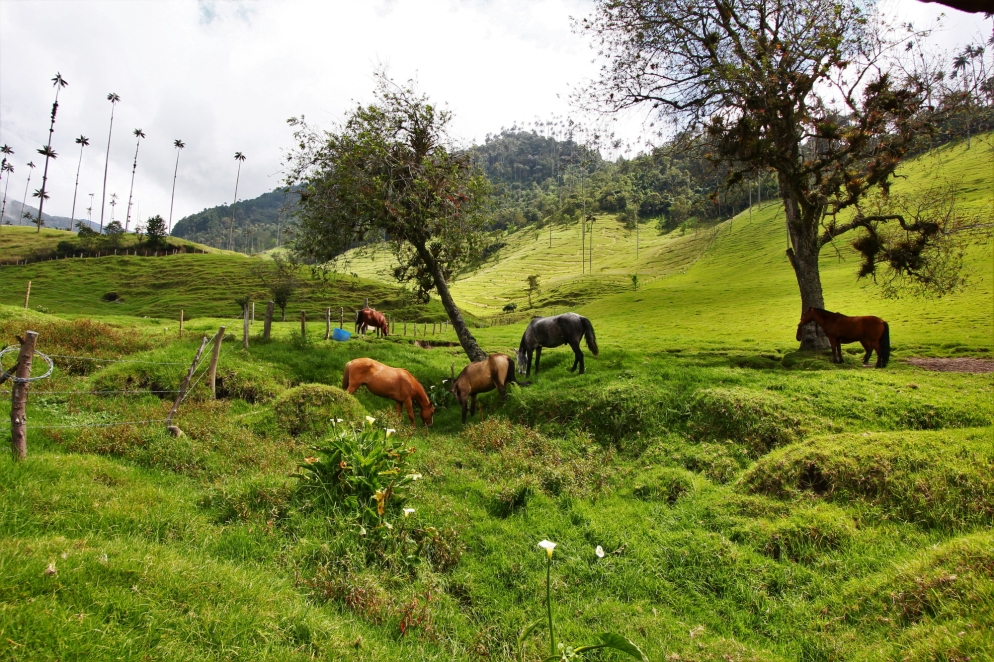 At the bottom, there’s a nice restaurant with a view, where we got a refreshment and a snack while waiting for out Jeep back to town.  Here, the waiter is explaining to Laura the cost of the restrooms for non-customers.  Good thing she’s not British.

So, hiking the Cocora Valley, at least the relatively dry part, was a really nice experience.  It’s unique and one of the most beautiful places we have been.  Salento and the surrounding area were fun, cheap, and relaxing.

After Salento, we returned to Bogotá for a few nights before catching our return flight to Houston.

So, that’s Colombia, where we traveled mid-November to mid-December, 2018. Sorry it took so long to get it down in writing.  If you’re new to our blog, we recommend you take a look at the post we wrote just before leaving for Colombia, which summarizes the last three years of our travels.

You can subscribe if you would like email notification when we publish new posts.  Thanks for reading!

2 thoughts on “Our House in Salento, Colombia”