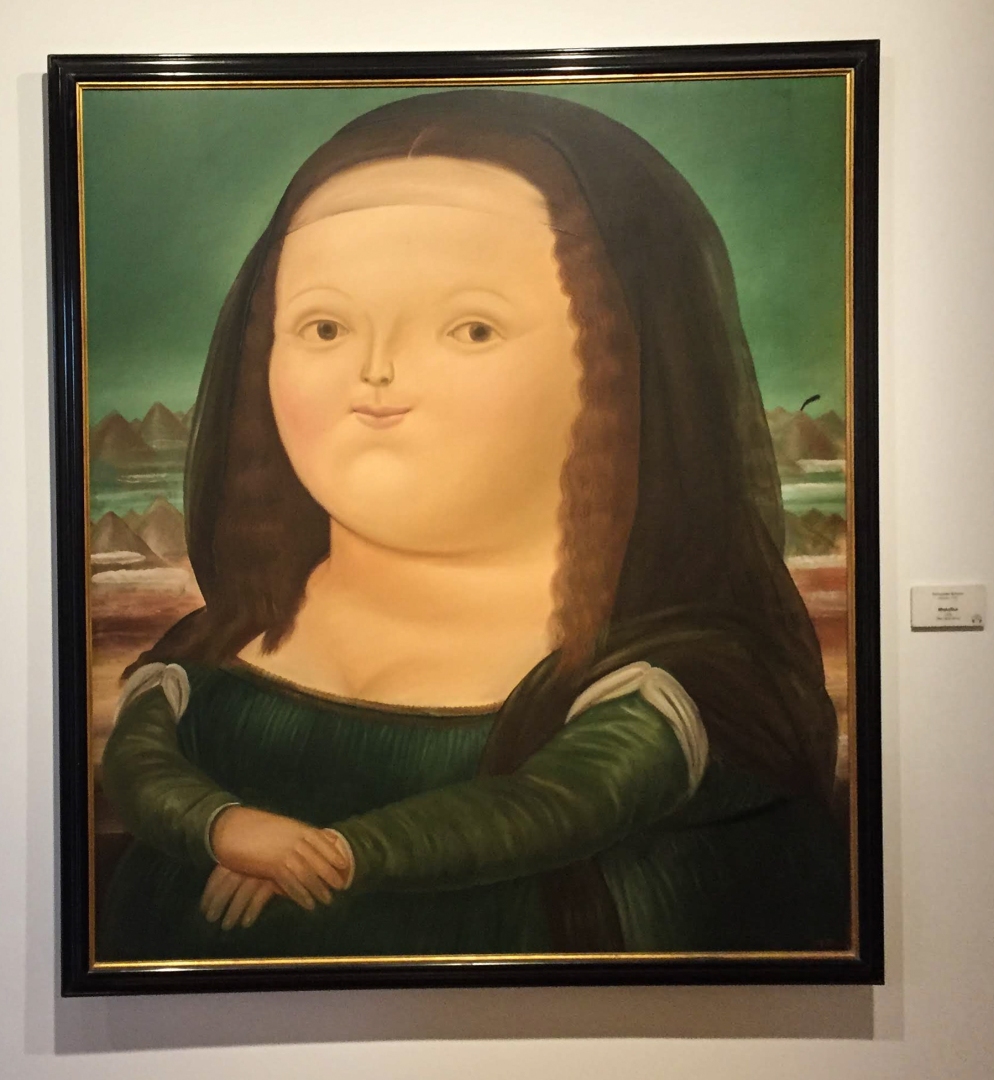 We decided to check out a couple of Bogotá’s most recommended museums, leaving plenty of others for another visit.  Our first museum was the Museum of Gold. 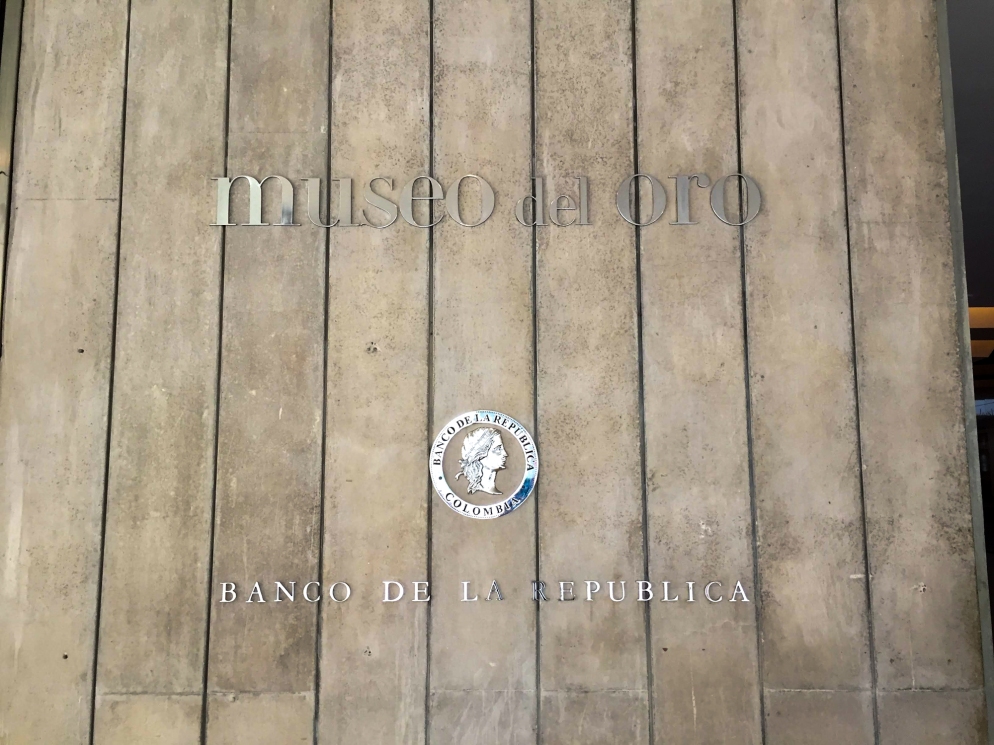 Owned by the republic and run by its central bank, this museum is dedicated to the pre-colonial societies of Colombia, and the artifacts they left behind, primarily gold work.  Colombia doesn’t have a lot of well-developed archeological sites, and those remaining have been pretty well looted.  The collection in the museum is made up almost exclusively of items purchased by the museum from private collectors who obtained them from looters.  As a result, the archeology is understandably difficult.  There’s no record of where these pieces were found, just lots of educated guess-work.

We learned a great deal at the museum (we had an excellent free tour from an English-speaking grad student working at the museum) and aren’t going to do it justice in this blog post.  Here’s a badly abridged overview of our visit.

This guy greets visitors at the door:

Unlike most of the museum’s objects, this figure is known to have come from the archaeological site of San Agustín.

The museum contains a dizzying collection of pieces, arranged, as well as possible, into the regions where they were created and used.  Most of the “gold” is actually gold alloy, mostly with copper.  Pure gold would simply be too soft for many of the applications for which it was used (including fish hooks!)

Nice shadow displays demonstrate how some of the ceremonial pieces were worn: 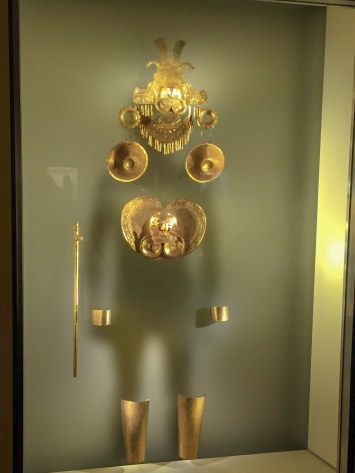 Many of the pieces are small items which were placed in ceramic vessels and buried as offerings, which explains how they survived the Spanish effort to seize all the gold, melt it down, and ship it back to Spain. 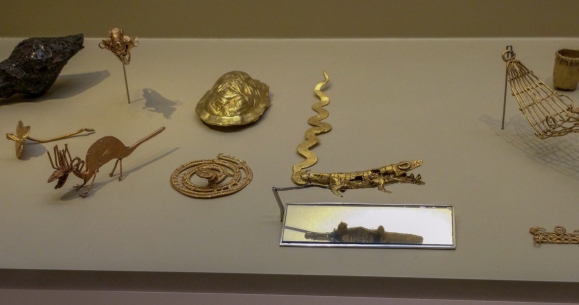 The museum’s prized piece is an unusually large, elaborate offering.  Unfortunately, it’s in a dark room, and brightly spotlit, and someone didn’t bring his camera, so this is the best we could do with cell phone cameras:

It depicts a chief and entourage going out onto a lake on a raft.  The chief, who would be covered in gold dust and wearing gold jewelry, would go into the lake and wash off the gold dust and drop the jewelry, offering it to the lake.  Or perhaps someone who lived in the lake.

It’s thought this piece was made in desperation, as it is unusually large (maybe 8 inches long), and because it has flaws resulting from problems with the mold (see how the gold has leaked between the reeds on left side of the picture).  It wasn’t recast, however, but offered as is.  No time for a re-do, it’s surmised.

Not all the items at the museum are gold.

Quite a few of the figures depicted are chewing coca leaves, as you can see from their cheek bulges [click to enlarge]: 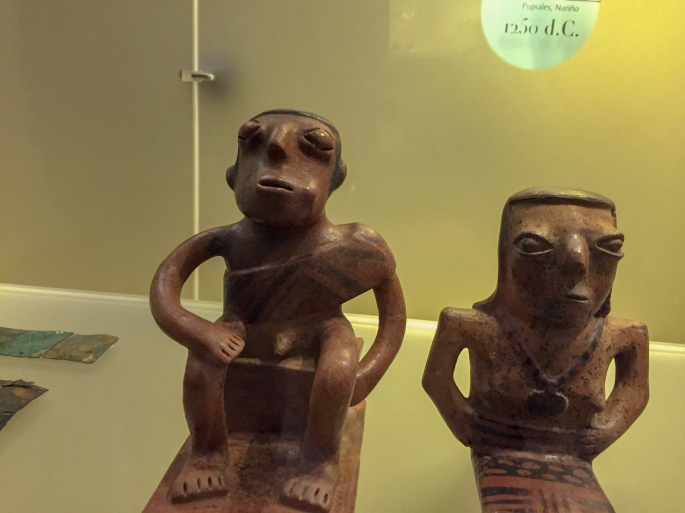 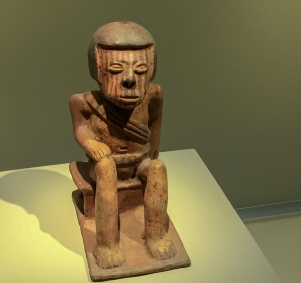 Chewing coca leaves was a very common and important activity.  At some point, it was discovered that a pinch of lime, derived from ground seashells, significantly increased the extraction of the active ingredient from the leaves, and so, along with a sack of coca leaves, people would carry around a container of lime, and a stick.  The stick could be moistened with saliva, inserted into the lime to pick some up, and then inserted into the cheek to mix with the leaves.

Some of the lime containers and sticks were quite elaborate.

Here’s an offering depicting a guy with his lime container and stick: 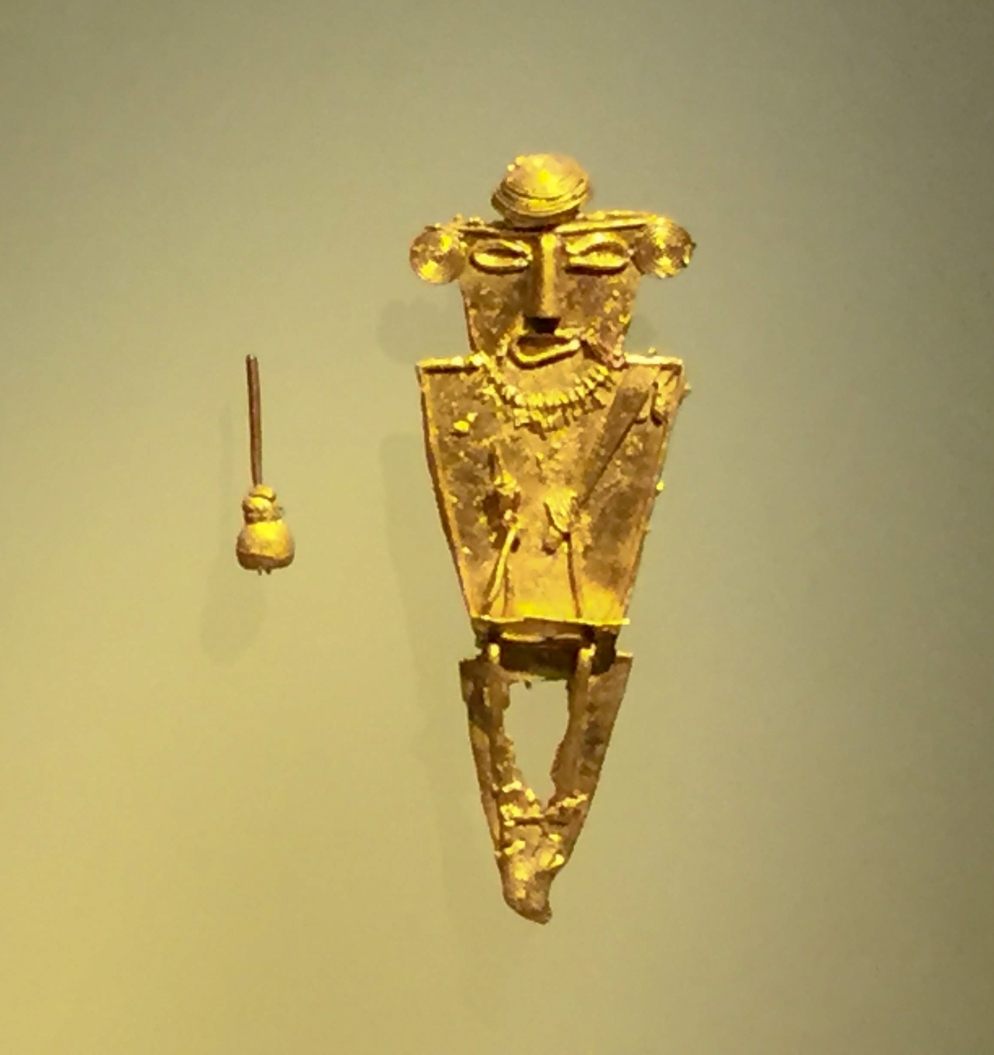 Some paraphernalia for imbibing a powered psychoactive drug (not cocaine) used by religious figures, presumably: 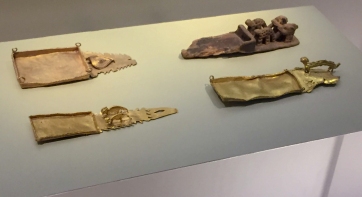 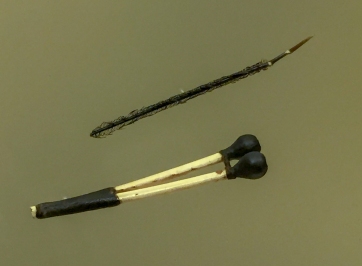 The museum also has a mummy.  This man was placed in a burial cave some time after contact with the Spanish (evidenced by glass beads), but before full cultural assimilation.

Below are items the museum received with the mummy.  They are said to be his, but this can’t be confirmed (because the mummy was acquired post-looting from an unknown location).

The museum has a section dedicated to the science of gold metallurgy and the process of mining and refining gold, and the techniques used to produce some of the remarkably complex pieces.  The primary method used for intricate items was lost wax casting.  Below are examples of tools used in the process as well as some carved wax: 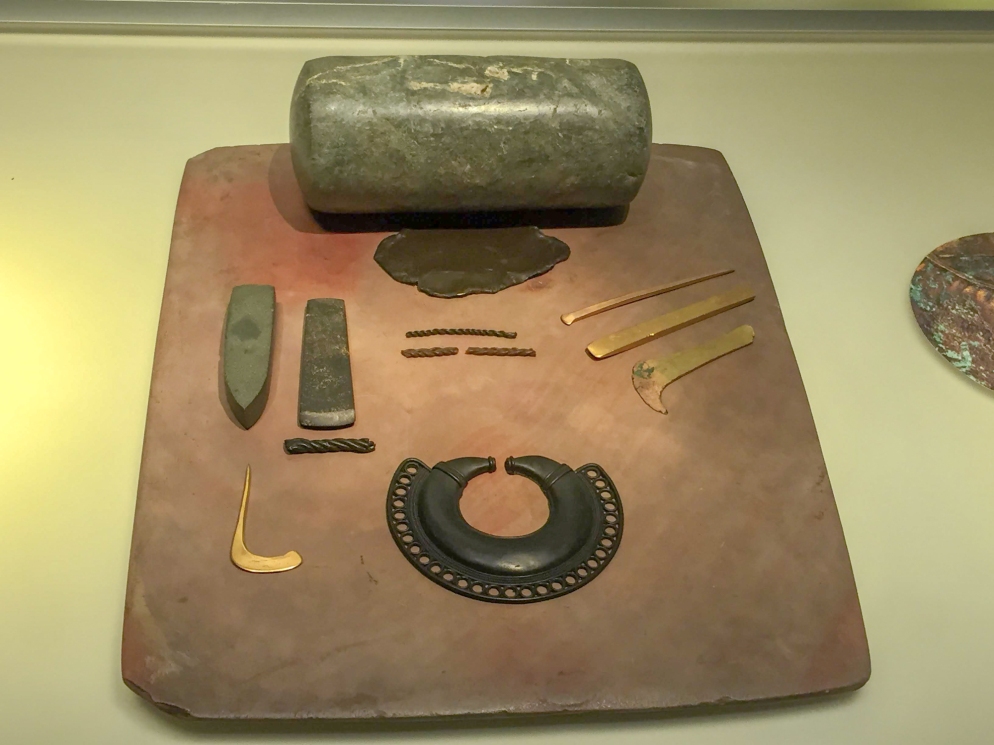 The Gold Museum was world-class.  A must-do for visitors to Bogotá.

Our next museum was the collection of Fernando Botero.  The museum was established in 2000 when Botero donated some 200 works, many his own, but also including a large selection of art from his private collection, including many of the greatest painters and sculptures from the 16th century to the modern day (e.g. Dali, Miró, Picasso, Monet, Rothko, Matisse).

Botero’s work on display included a variety of paintings and sculpture.  We know, the resemblance is uncanny: 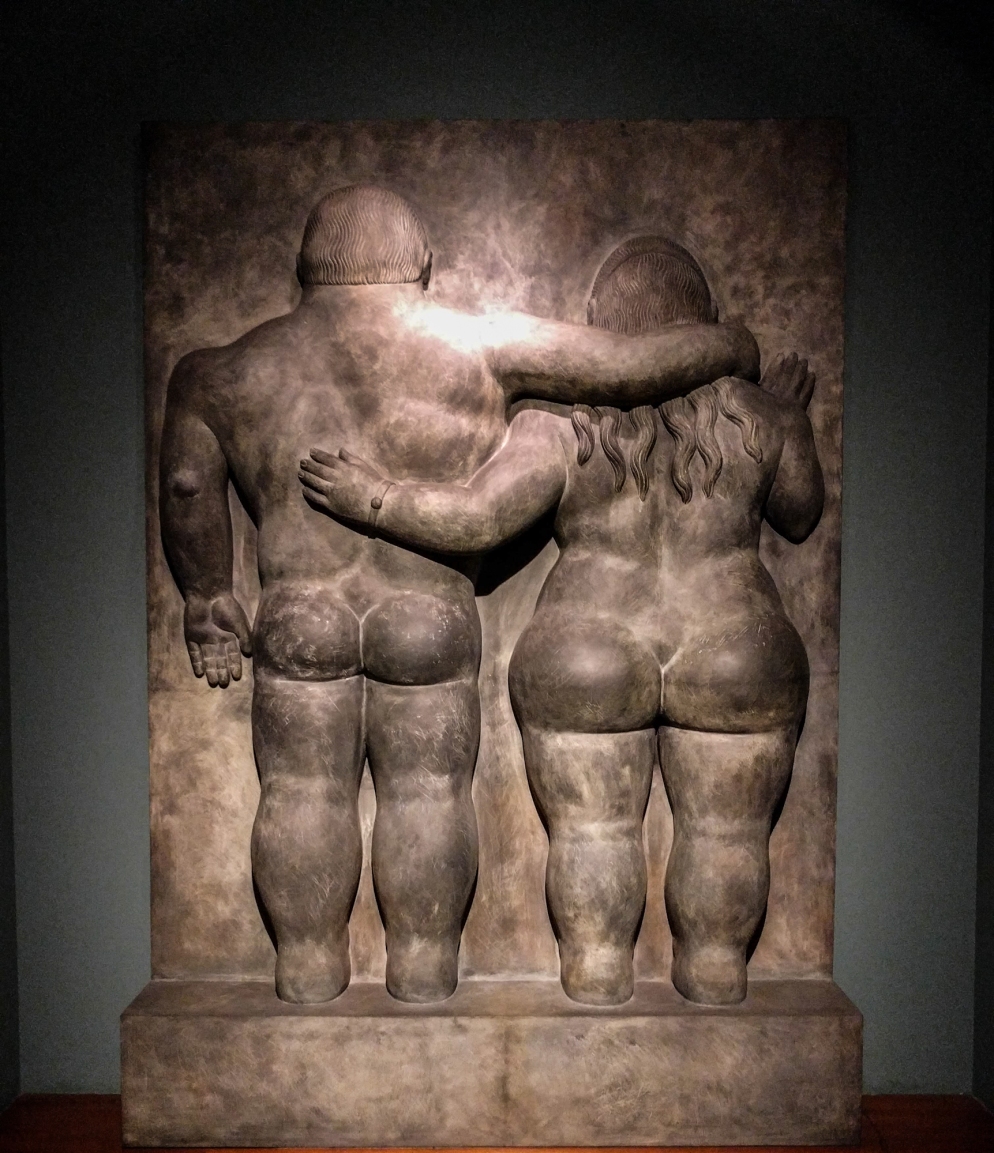 Some of Botero’s other works: 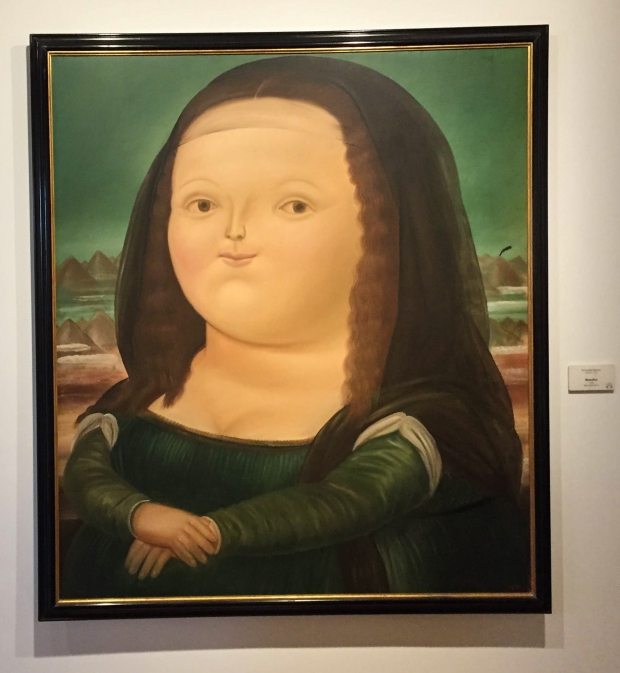 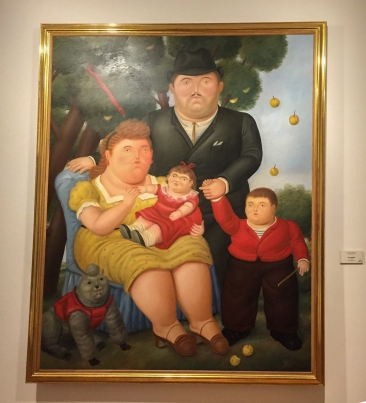 The Botero museum, and a huge complex of adjacent museums are free, making them accessible to all, an undeniably good thing.  We hope to see more when we return.

We later visited another interesting neighborhood near the one where our Airbnb was located.  This neighborhood was closer to the mountains, and had a quieter feel.  Plus, Tudor architecture, for some reason.  We really need a good tour. 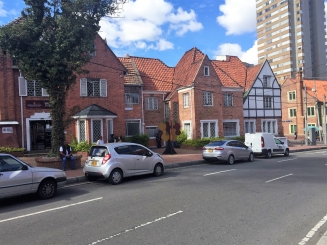 Not pictured are the neighborhood’s profusion of great restaurants, casual to elegant.  Bogotá is a good city to wander into really good, and really affordable food.  But we didn’t come to Colombia simply to sample Bogotá’s restaurant scene.  It’s time to move on.

At the airport (and everywhere else we went) Christmas shopping was well underway: 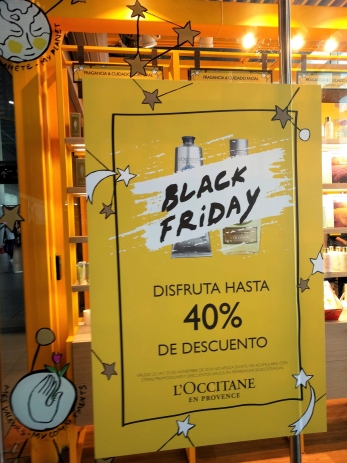 We flew from Bogotá to Cartagena on Avianca airlines, and the contrast to United could not have been more clear.  This was flying like is used to be!  Comfortable seats, reasonable security, friendly staff.  Oh, and an ad in the in-flight magazine had Laura laughing out loud and getting curious looks from our fellow passengers:

2 thoughts on “Our House in Bogotá, Part 2: Museums”