October 20, 2016:  It was our third visit together in Yellowstone.  It was indeed charming.

Yellowstone is really big, more than 2.2 million acres (3,400+ sq mi; aprox. 9000 sq km), spanning parts of 3 states (Wyoming, Montana and Idaho).  It contains the Yellowstone caldera, the largest supervolcano in North America.  People spent a lot of time during our visit assuring us that the volcano was definitely not about to blow.

We first visited the park together in August of 2002.  We were tent camping and quite unprepared for overnight temperatures in the mid 20s F (about -5 C).  Laura’s Aunt Ann, who was working in the park, came to the rescue, hosting us in her RV for the rest of our stay.

In our estimation, Yellowstone has three distinct characteristics that each, independently, make it a high priority visit.

First, the park is an amazing location, with high mountains: 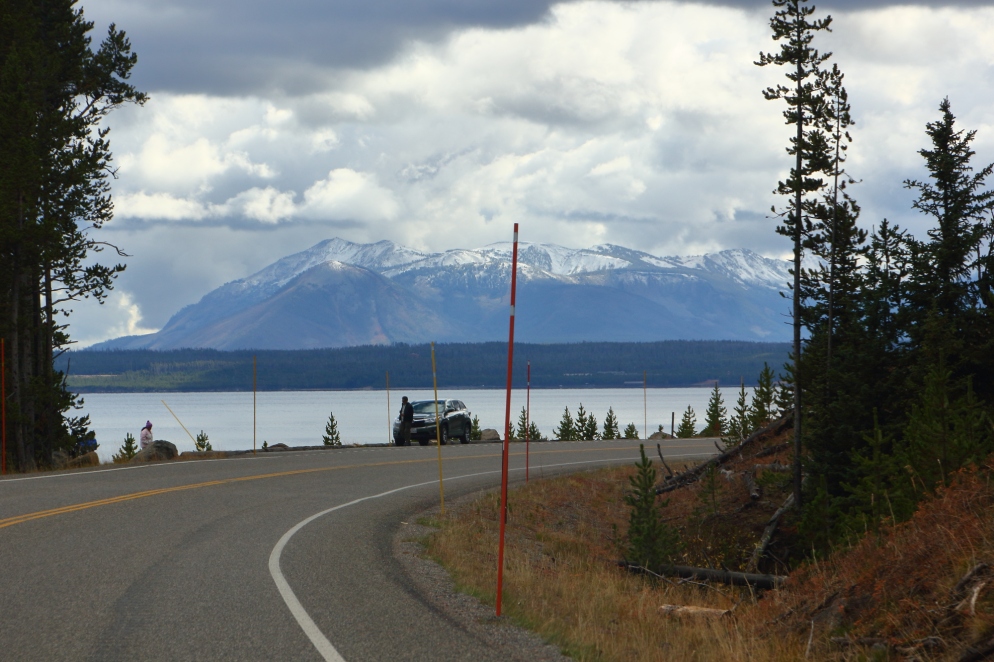 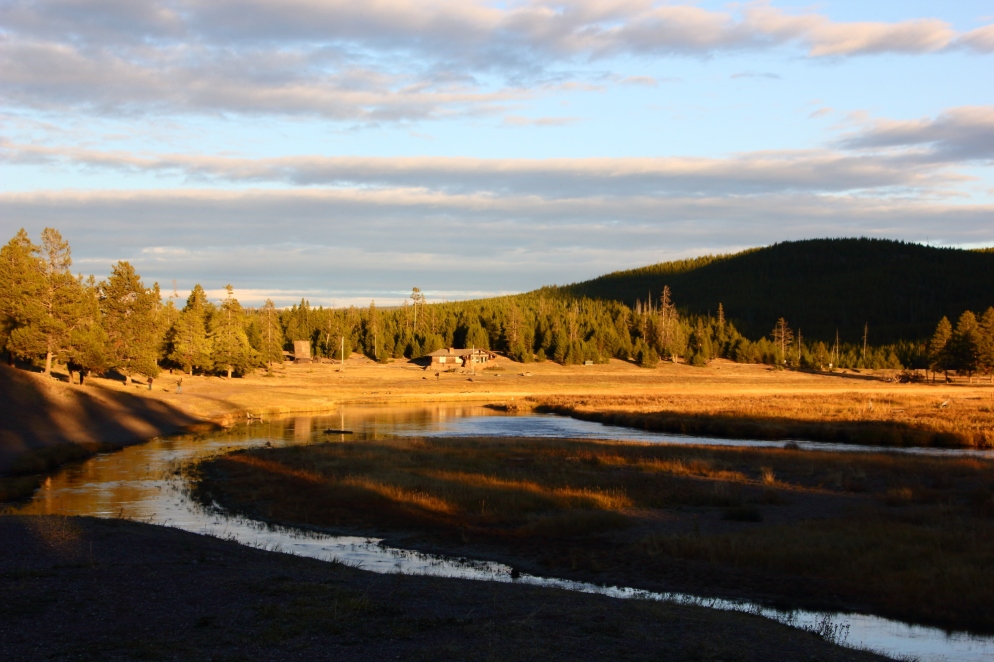 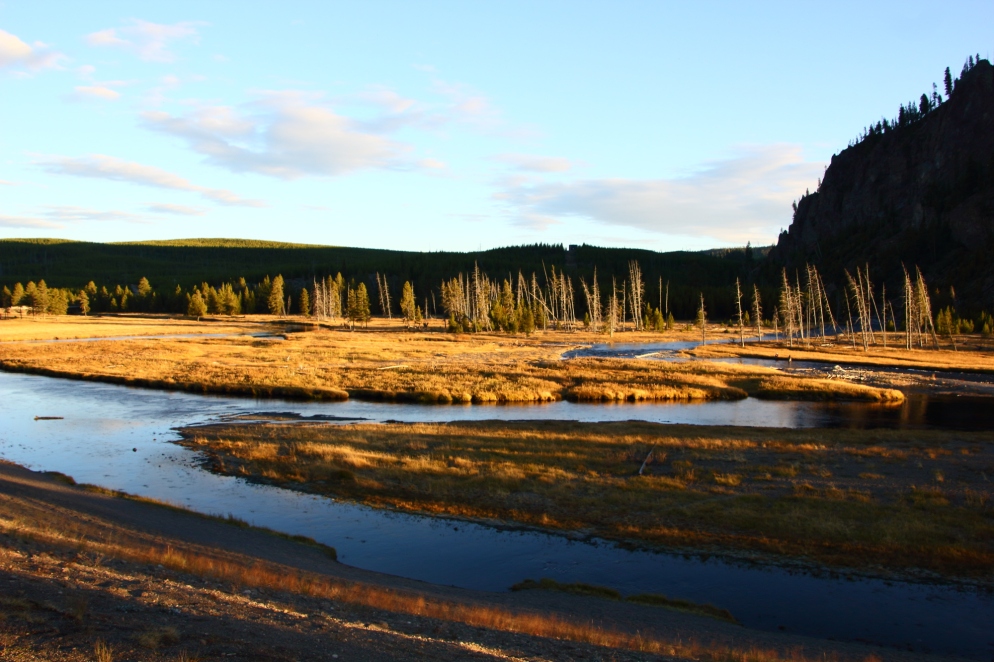 There is lots of fly fishing happening in those valleys this time of year: 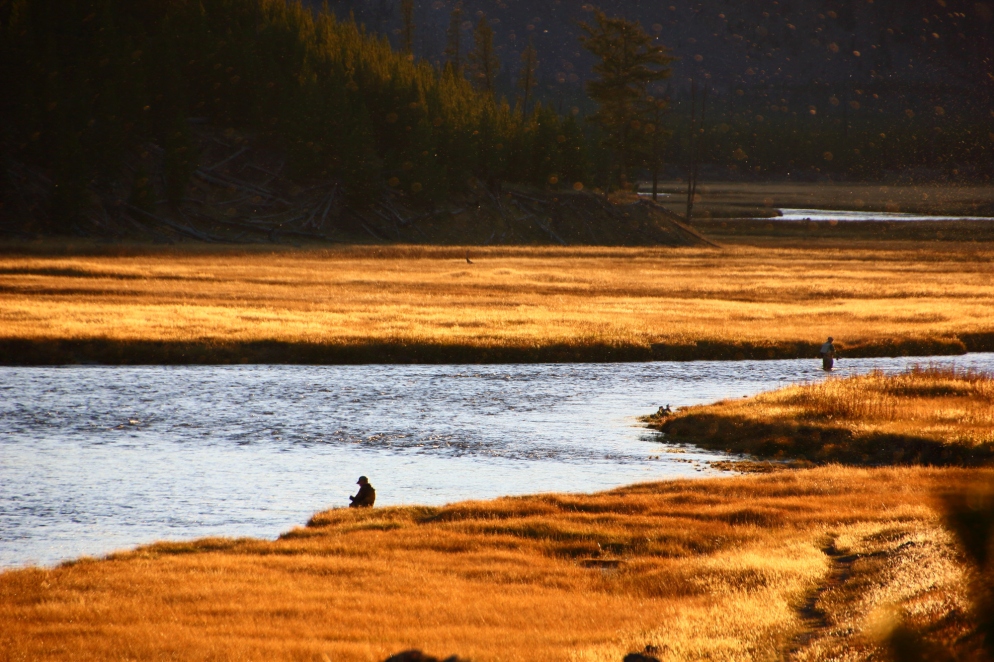 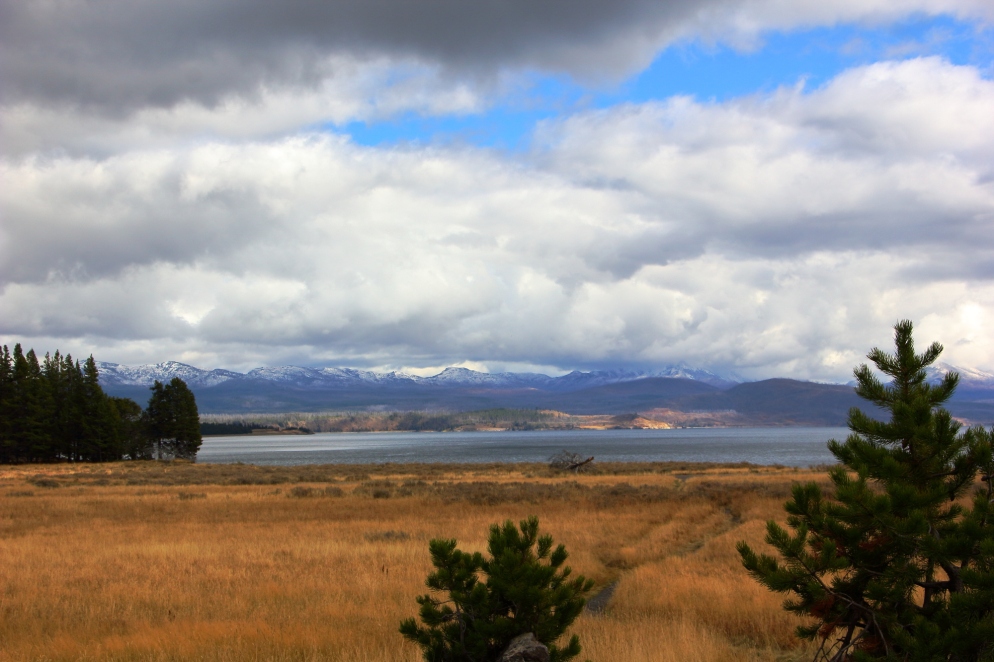 and an impressive canyon:

There’s generally a great variety of wilderness flavors, with amazing opportunities for exploration. 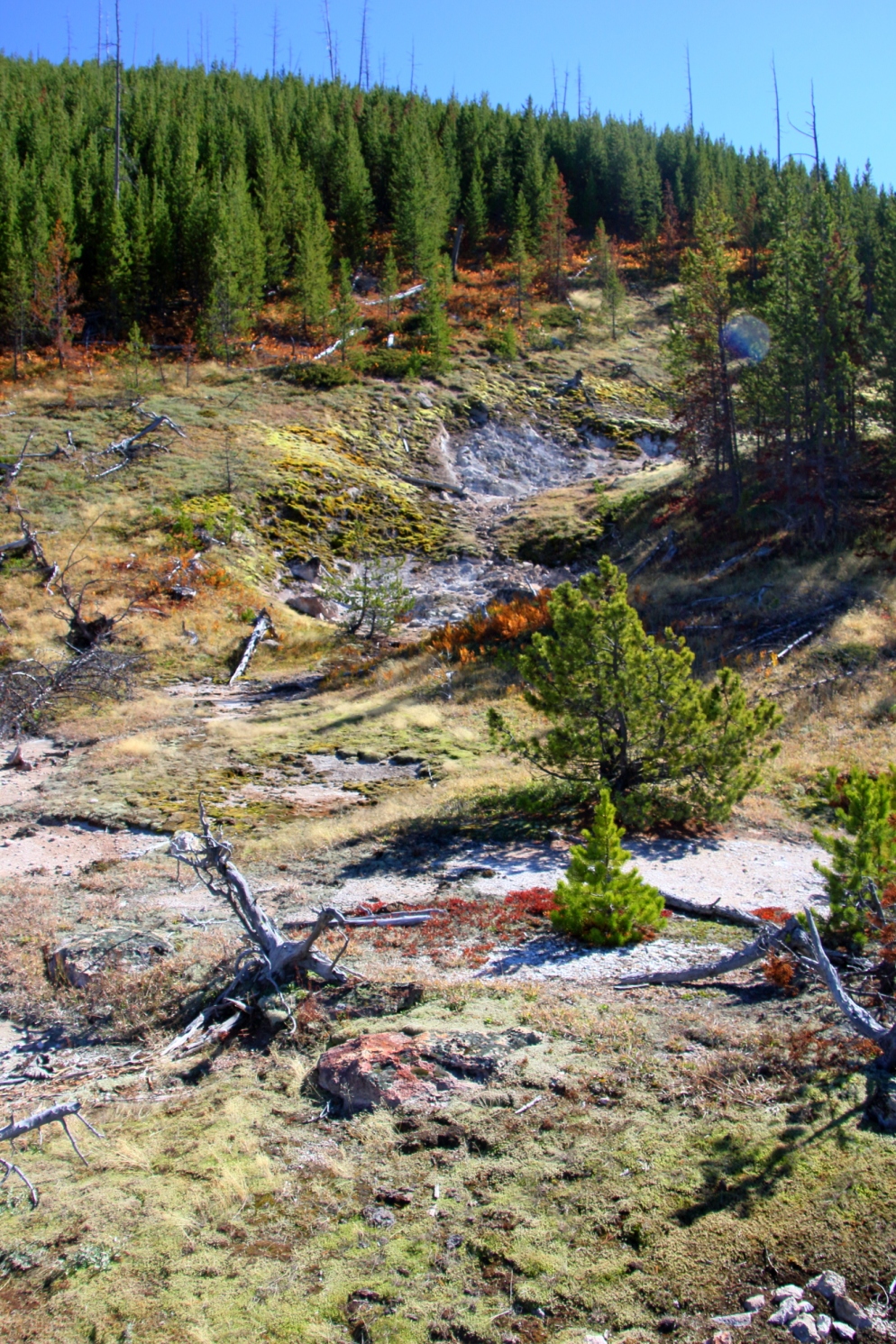 There is an area within the park that is farther from a road than any other place in the contiguous 48 states.  The vast majority of Yellowstone’s visitors never venture away from the attractions along the Grand Loop Road, so even though the park is hosting record crowds, there are plenty of opportunities for back country adventure far from other humans.  In our experience, even walking a half mile down a trail away from the road will find you some relative solitude.

Second, Yellowstone is probably the best place in the US to view wildlife.  (We’ll show you a lot more of that in a later post.)

And after you’ve seen all of that (tip, you actually won’t unless you stay for months), there are lots of random interesting things to see like this petrified tree: 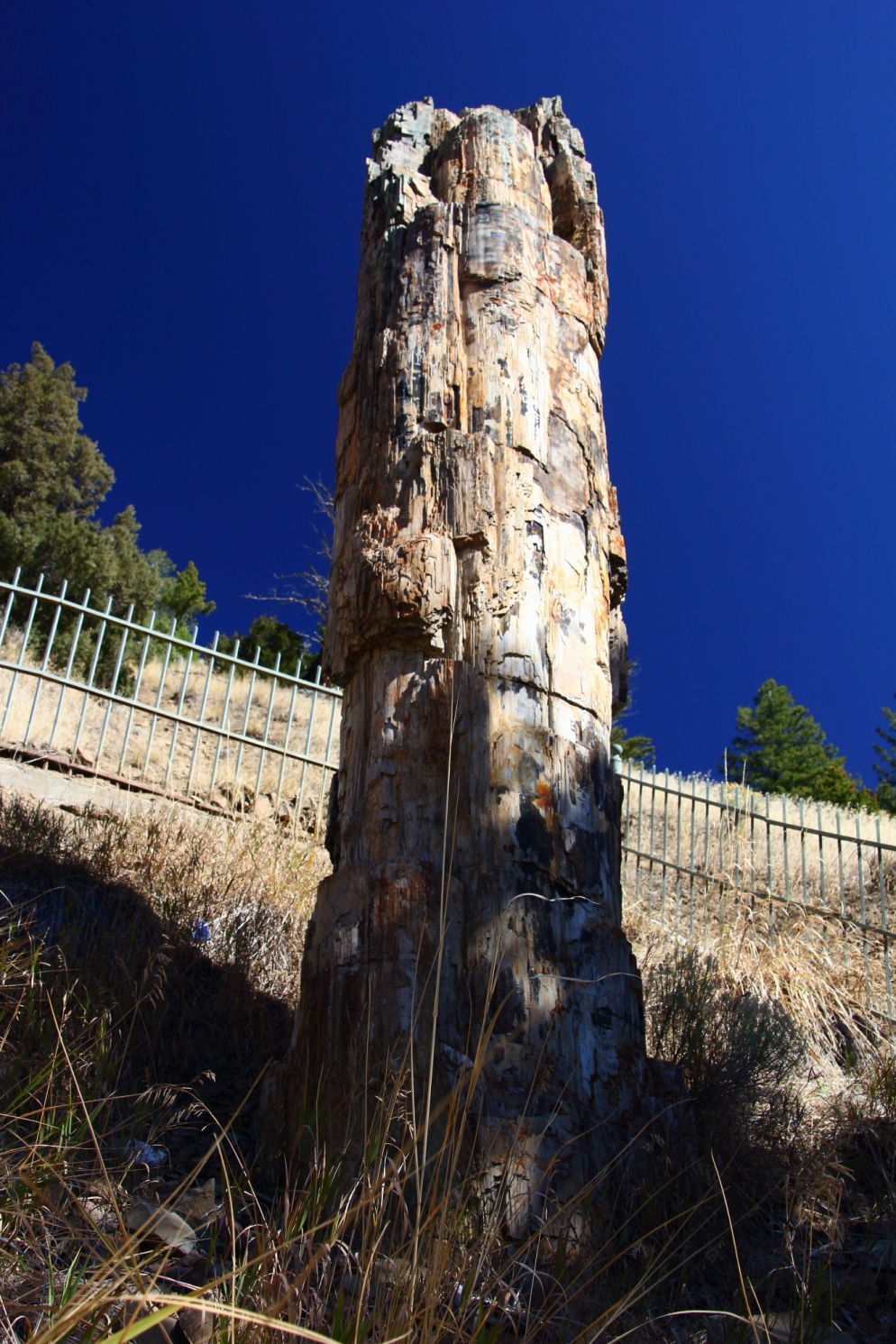 Yellowstone is wild.  It’s in the high mountains and weather is something that you have to pay attention to. 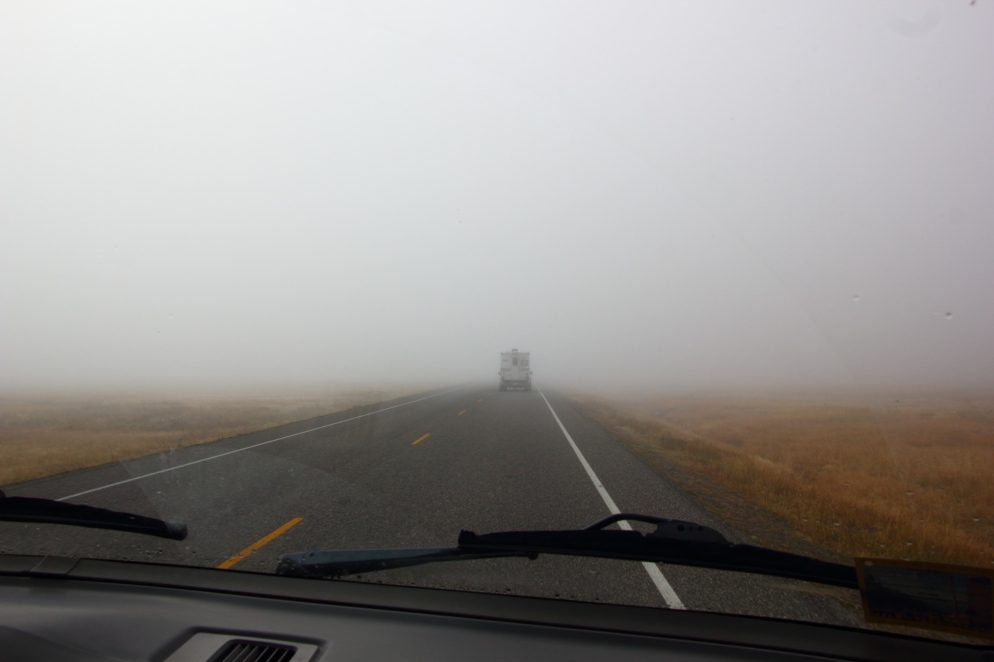 There’s lots of land, lots of wildlife and lots of hydrothermal features, all of which can be dangerous if not heeded adequate caution.  Ann has lots of stories about park guests asking when park features will be displayed or how animals are restrained.  Of course, there are no such displays or restraints.

Nature and humans interact here.  That results in some interesting traffic jams (aka bison jams, elk jams, owl jams…you get the idea).  It’s often a good idea to get out and see why everyone has stopped (if you can do so without blocking traffic, of course).  More on wildlife viewing on an upcoming post. [click photos to enlarge] 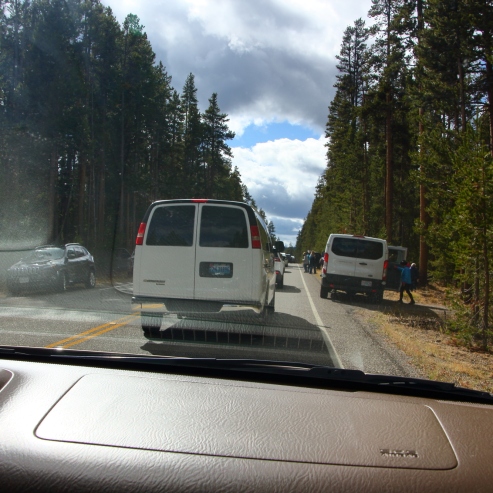 Rangers spend a lot of time directing traffic to break up these jams.  People just don’t want to miss seeing something.  Between animals and weather, travel times can be unpredictable in the park.  But why should anyone be in a hurry?  Yellowstone isn’t a place you should try to see in a day.

Being an iconic American experience, Yellowstone can be pretty crowded, especially at its most famous spots.  It gets busier every year.  More than 3.9 million have visited so far in 2016, a new record.  We were surprised to find big crowds still present in late September, including lots of busloads of Chinese tourists.

There were lots of foreign tourists.  Most were equipped with selfie sticks.  Our informal observation lead us to both conclude that Americans were a small minority of visitors during our visit, probably because most American kids have returned to school by this time of year.

Some folks come from places with differing customs, and the park has to make some accommodations: 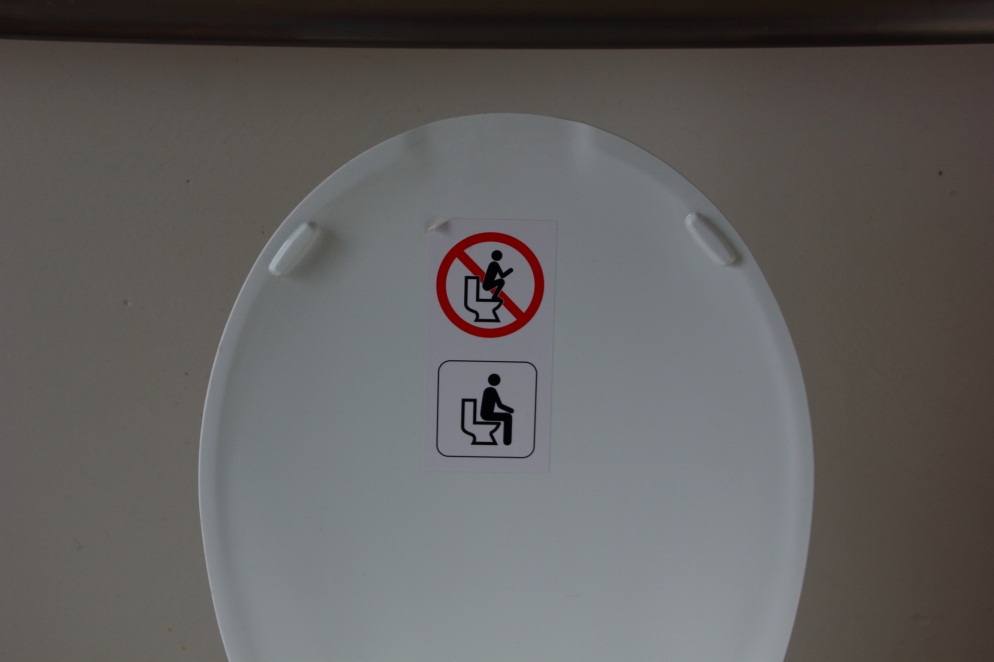 Certainly the number one attraction at Yellowstone is Old Faithful, a fairly impressive geyser that has the added courtesy of being predictable, making it a great tourist attraction.  In contract, several of Yellowstone’s other geysers might go days, weeks, or even years between eruptions.  More on Yellowstone’s hydrothermal wonders in an upcoming post.

The interior is one of the largest wood structure interiors you’ll ever see: [click to enlarge] 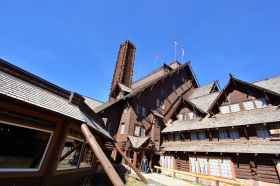 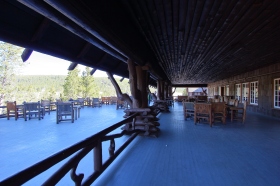 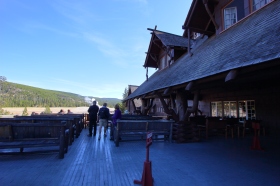 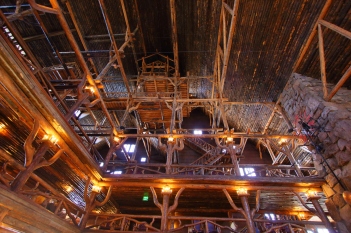 You might have noticed in our last post that fall colors were in full force in the west in mid September, and Yellowstone was no exception.

Lots of people are camping in Yellowstone this fall.

Some of them might be doing so for the first time:

We have seen a lot of these RVs for rent this fall, most from Cruise America, some from Cruise Canada.  It seems to be a popular way to tour the West.

Some of our frequent readers think that we should include more pictures of ourselves.  Ask and you shall receive!

We have lots more Yellowstone to share, and we will in upcoming posts.

We love to hear your comments and feedback.  Thanks for stopping by!

8 thoughts on “Our House in Yellowstone, Part 1”