January 13, 2016: A note on prevalence of Mayan ruins on the Yucatan Peninsula. 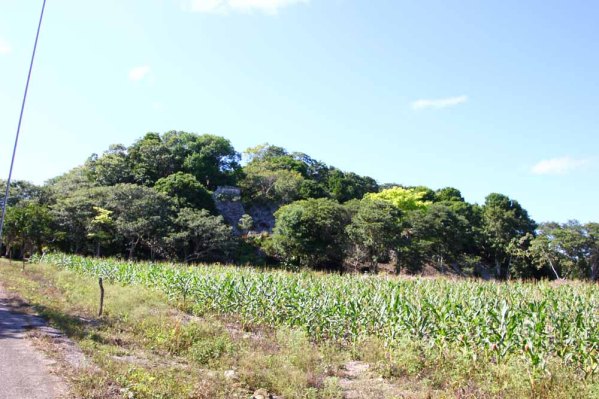 This “hill” sits between the sites of Dzibanché and Kinichná, which themselves are only about a mile apart.  As you may be able to see, this is no ordinary hill.  See that grey area in the middle?

That hill is a man made construct.  As far as we can tell, it isn’t marked anywhere as an archaeology site, and it’s not on the map at the joint entrance kiosk to the Dzibanché and Kinichná sites.

Back in Xpujil, (the town, not the archaeology site 1/2 mile away) we stumbled upon this small area of recently excavated ruins:

These appear to be small residential buildings, the likes of which are surely scattered all around the central ceremonial plaza that is the focus of the modern archaeological site.  The same is true for most sites, where only the biggest buildings in the central ceremonial/administrative heart of the city have been attended to by looters/archaeologists/tourists.  It’s interesting to see these residential ruins right in the middle of modern housing likely occupied largely by the descendants of the people who built the old city.

The Yucatan and adjacent Mayan lands in southern Mexico, Belize, Guatemala, and Honduras are covered with hidden ruins, some merely unexcavated and some entirely unknown.  Despite decades of dedicated scientific work, Mayan archaeology is still in its infancy, and amazing new discoveries are common.

Back to our story.

After 3 nights in Xpujil, we got up early on Saturday, January 9th, and drove to Calakmul. Though it’s only about 70 miles from Xpujil, it’s a 2.5 hour drive.  The last 35 miles of the drive occur on a narrow 2-way road which is often narrowed to one lane (or less) by a combination of potholes and low overhanging jungle.  It’s definitely an adventure. 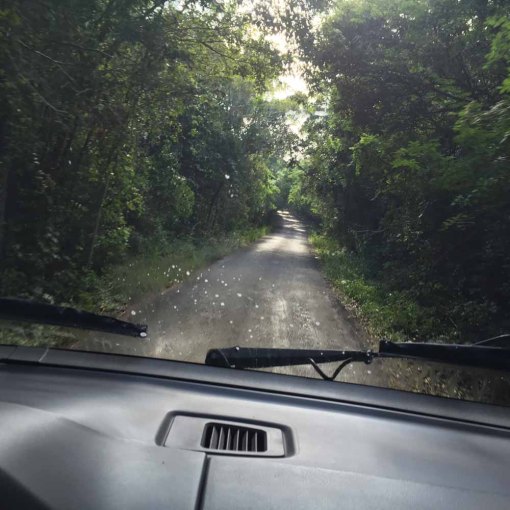 Calakmul has recently been named a UNESCO World Heritage Site based on both its archaeology and its natural surroundings.  Within just a few minutes of entering the site, we saw a gray fox (not pictured), and soon encountered a variety of other interesting animals: 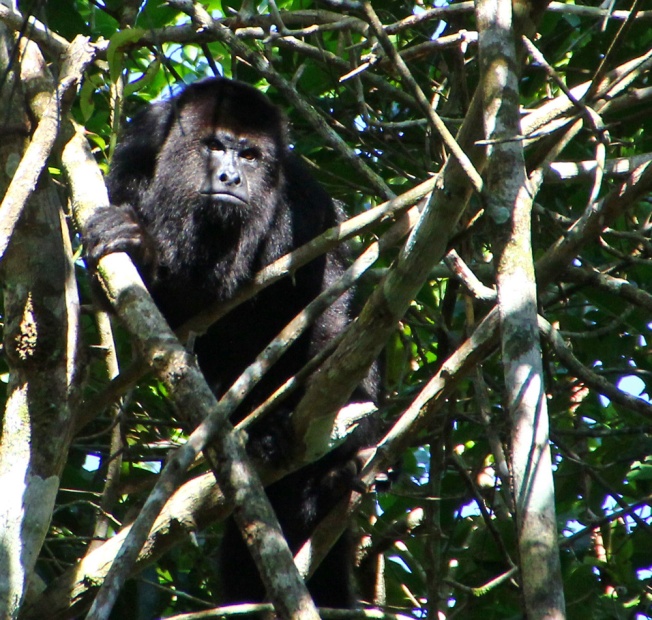 We were observed by a curious spider monkey and mother:

Oh, and there are ruins there, too.

Calakmul has one structure that’s particularly impressive.  Here’s an aerial picture stolen from The History Hub: 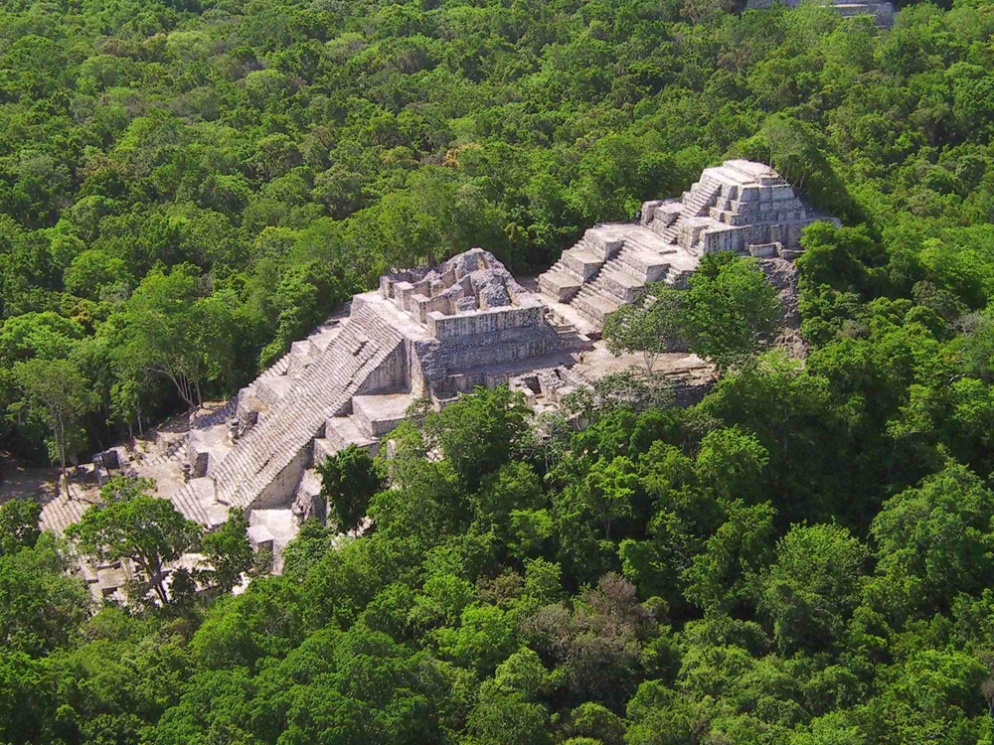 We had read that the view was great from the top, but we hadn’t seen pictures.  From the base, all you can see is the lower section: 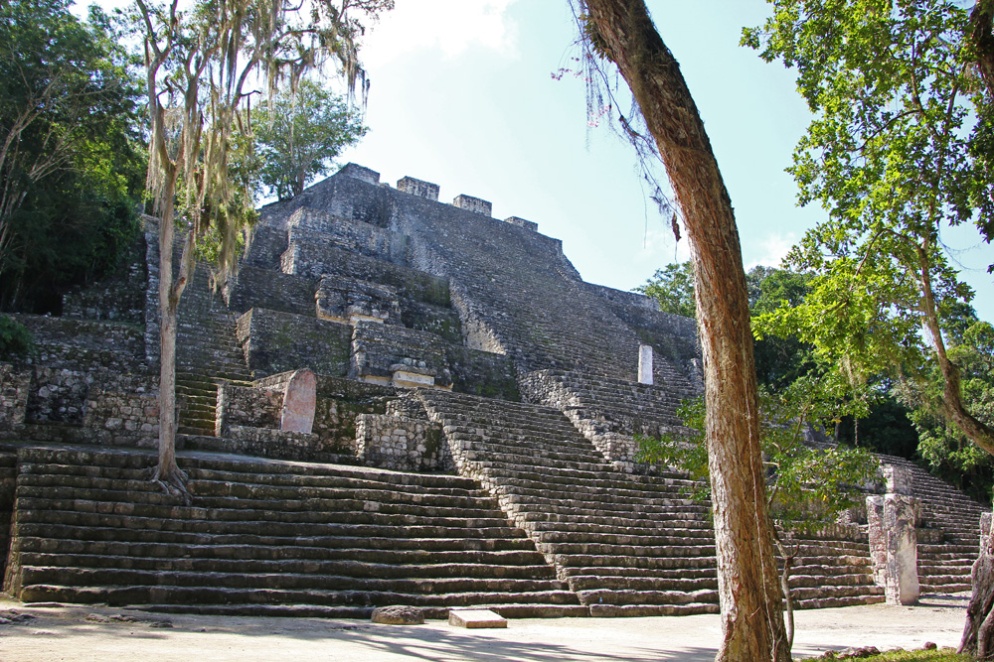 It was quite a climb, and the view was great:

But once we got to the top, we found this:

At the top of the lower section was quite a bit of ruined structure.  There is room for all sorts of activities, storage, perhaps habitation: 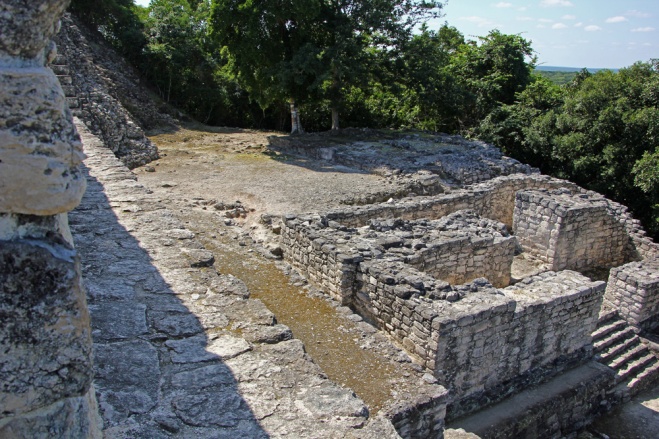 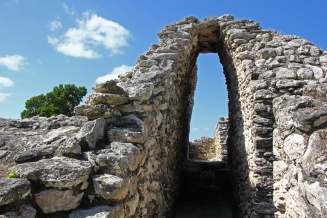 The higher, set back temple must have been invisible from the plaza below, creating a high, holy realm for whatever ceremonies went on there.  And the view was, indeed, good:

On our walk out of the site, we saw a procession of about a dozen spider monkeys pass overhead.  We managed to get the last couple on video:

After Calakmul, we decided to forgo the nearby, but poorly reputed town of Escarcega, and drive all the way to the gulf coast.  The highway was smooth enough to carry people by the truckload.

We ended up where the highway hit the water in the town of Champotón, which is apparently the Maya word for “many cocktelerias”:

We pulled over at the first hotel we saw, which happened to be Posada La Regia, which we recognized to be recommended by the Lonely Planet Guide.  Before we could even get out of the van onto the sidewalk, an eager, smiling receptionist was standing outside of the driver’s window.  Upon entering the lobby, we could see that our van, parked on a side street, was square in the sights one of the security cameras.

After some preliminary discussion, a woman sitting at a table in the lobby said to us something like (in Spanish), “Didn’t we see you in Xpujil.”

Woman, “We were on the motorcycle.”

Woman, “This is our hotel!”

Strange world.  The room seemed nice, and they gave us a bit of a deal, so we decided to stay.  They ended up recommending a restaurant for us to have dinner in, which also turned out to be theirs, and when we asked if it was close enough to walk, the husband insisted on driving us there.  Champotón was not a city of much touristic interest, but if you end up there, you should stay at Posada La Regia. They are nice people.

Keep the comments coming.  We enjoy hearing from you.  Questions and suggestions are also welcomed.  Click on the “follow” button to get updates emailed to you.