Spring brought us back to New Orleans.  Surprise!  But we had some other adventures before we got there.

While spending some spring in South Texas, before temps hit the 90s, we visited the Aransas National Wildlife Refuge.  Located on the Gulf Coast about 165 miles southwest of Houston, the refuge harbors sea turtles, a plethora of migratory birds, and plenty of alligators.

In addition to the native wildlife, there is an unfortunate infestation of wild pigs, as is the case in much of Texas.

Various plants were in full bloom for our visit.  Some, like this one were just a few feet tall. 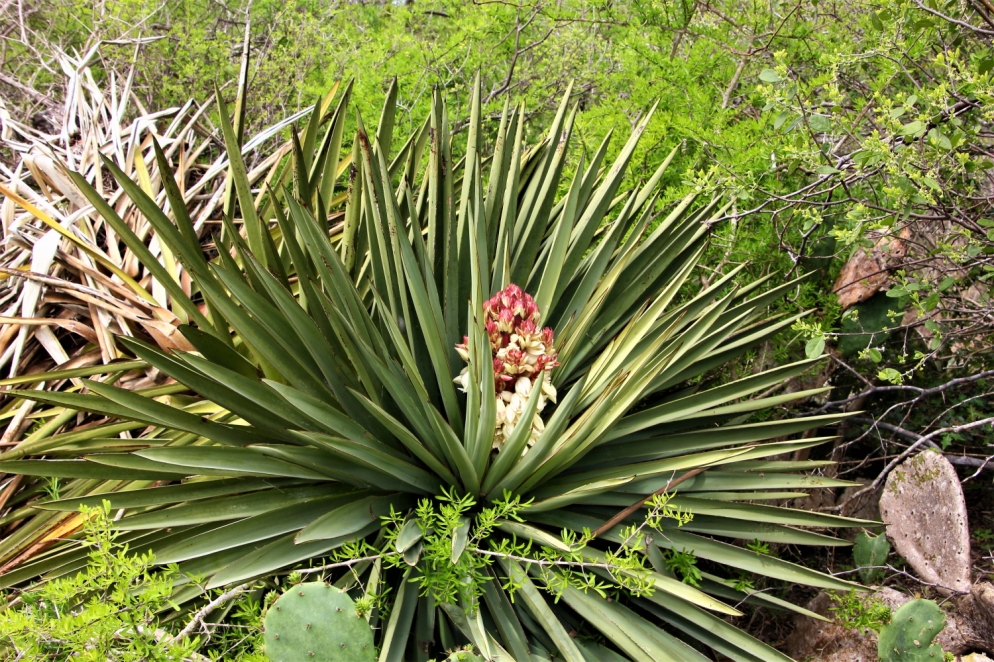 Birds, birds and more birds.  The sign below does a nice job of showing the birds you might see, in relative sizes. 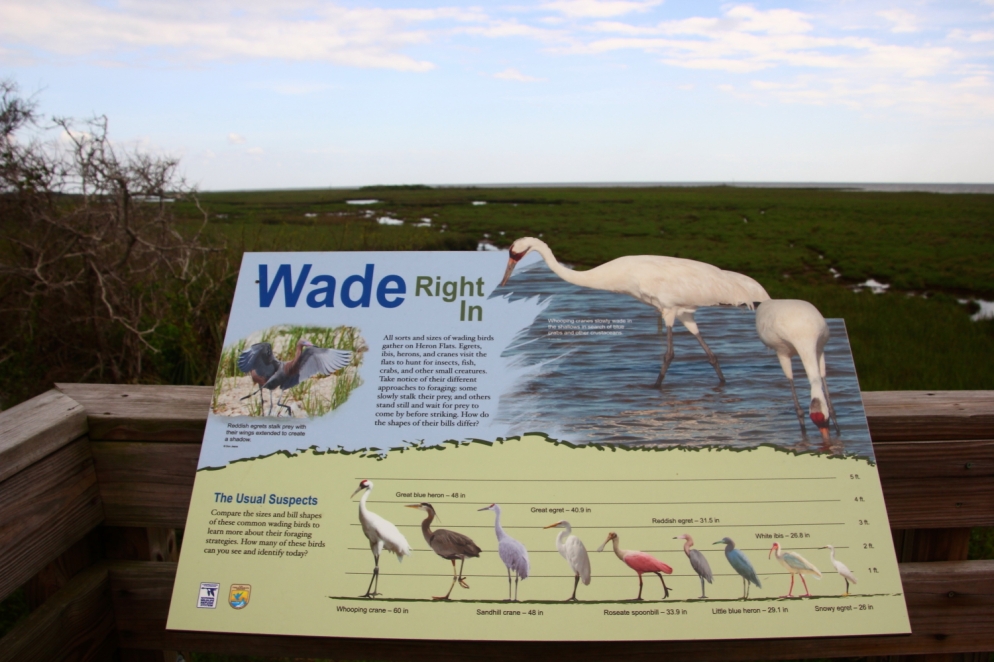 And of course, we saw some actual birds. 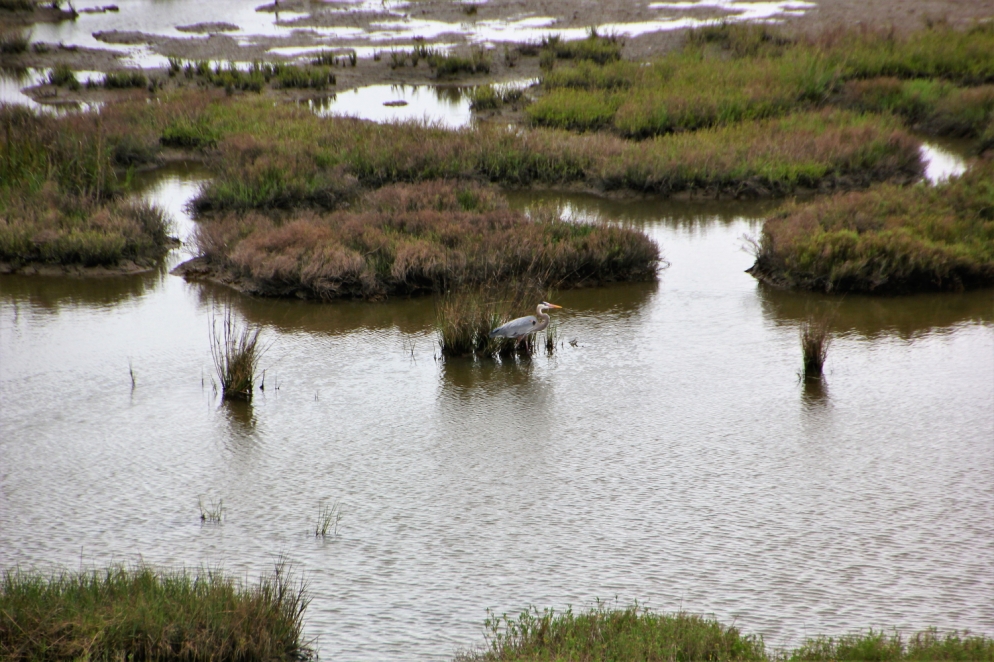 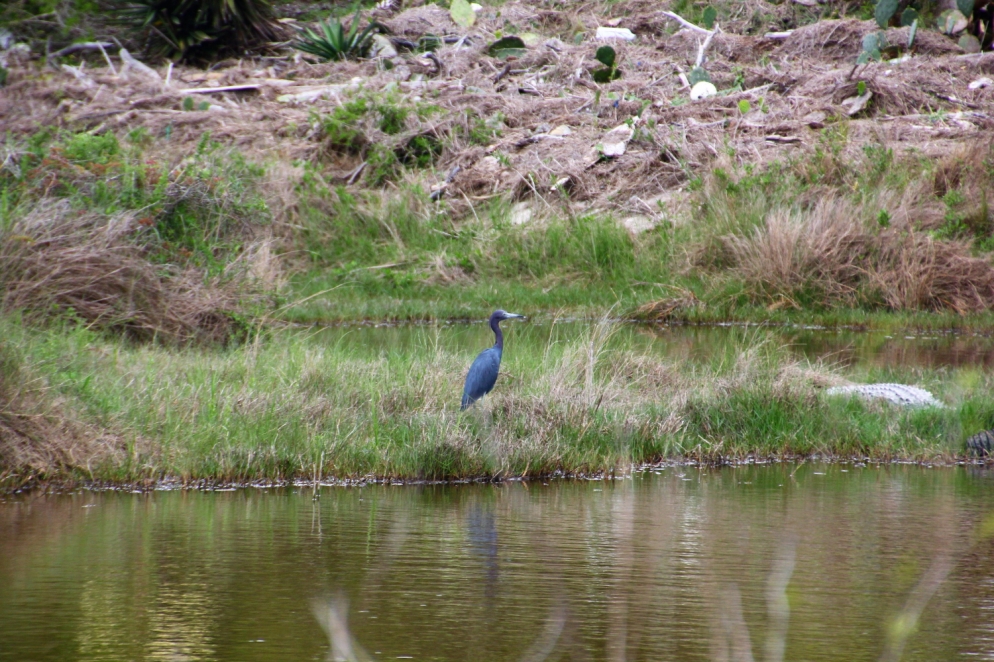 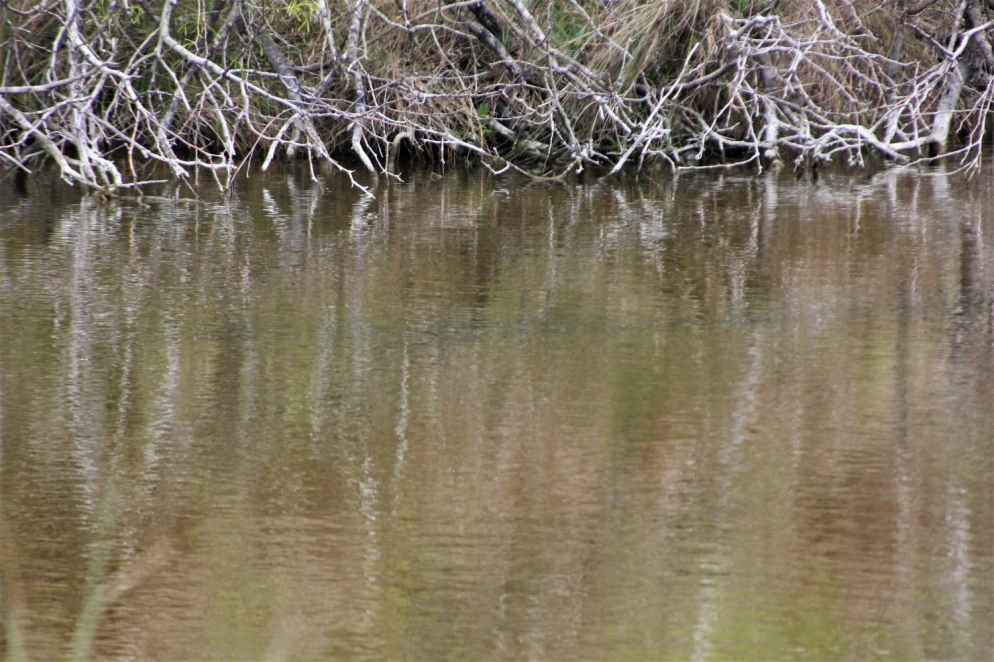 The refuge’s claim to fame is North America’s tallest bird, the whooping crane.  These birds stand 5′ tall with a 7′ wingspan.  They live up to 25 years in the wild and 35-40 years in captivity.  At the Aransas National Wildlife Refuge, the only natural wild flock of these birds in the world spends their winters, migrating south from the Northwest Territories of Canada.

Whooping cranes were pushed to the brink of extinction during the first half of the 20th century.  In 1941, there were believed to be just 15 in existence.   The surveys aren’t in for the most recent winter but over the 2016-17 winter, surveys counted 431 cranes wintering at the refuge.

They are very shy and there’s no guarantee that you’ll see any.  The volunteers at the visitor center (the temporary visitor center, as the permanent one was damaged by Harvey and is not yet up and running) told us where we might see a pair.  Indeed, we got lucky and saw (kinda) a couple of pairs, one with a juvenile.

See the three white blobs near the center?  Those are cranes.

Not a bad view, considering that the cranes were approx 0.7 miles (1.1 KM) from the observation platform. 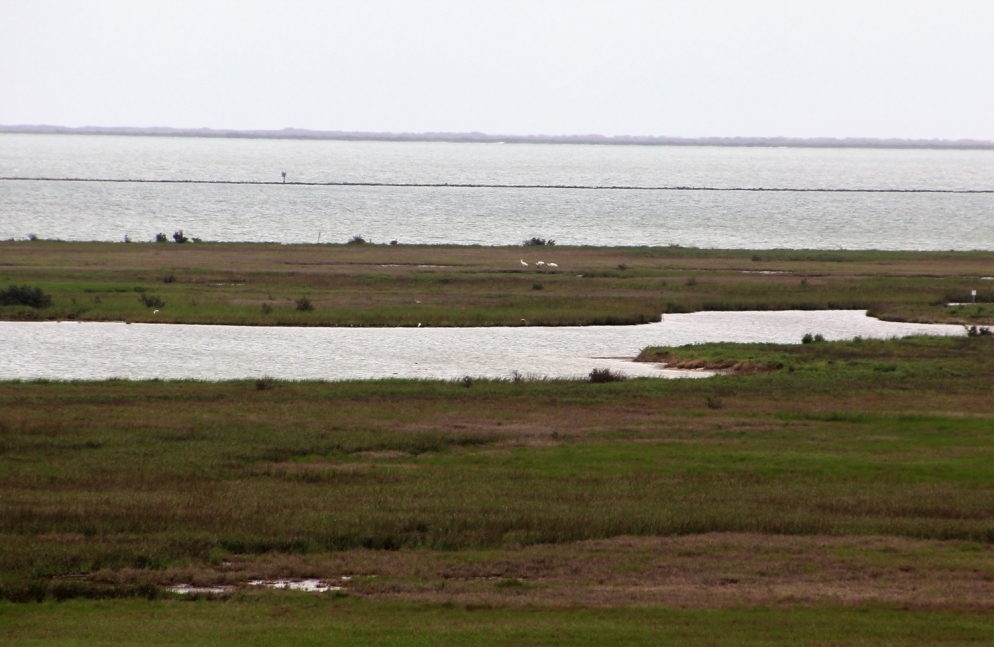 The second pair was a surprise and a little closer to us.  Not close, but at least it’s obvious that this is a bird.

We also made a springtime visit to Matagorda, Texas, where the Colorado River meets the Gulf of Mexico.

On the day of our visit, the town was hosting its annual Matagorda Seafood Fest.  We had oysters, raw and fried, and some fried gulf shrimp.  There were bands, vendors and all the trappings of a small town festival. 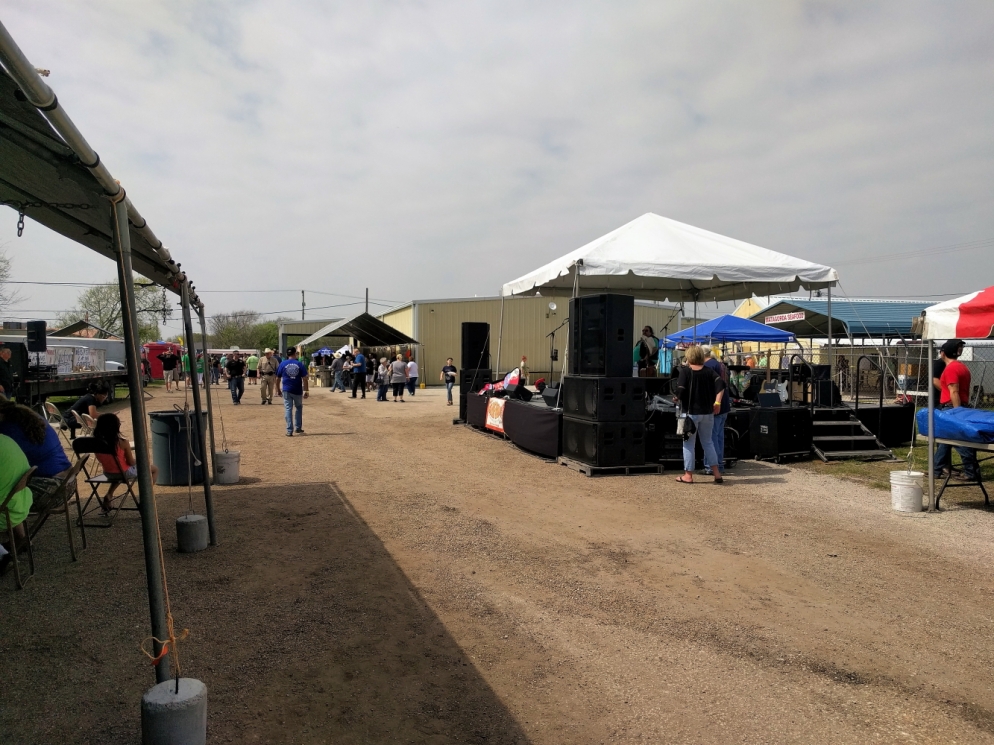 The town of Matagorda sits inside a barrier island.  While in the area we drove out to the beach, one of the nicest on this part of the Gulf Coast.  It’s also the closest beach to Blessing. 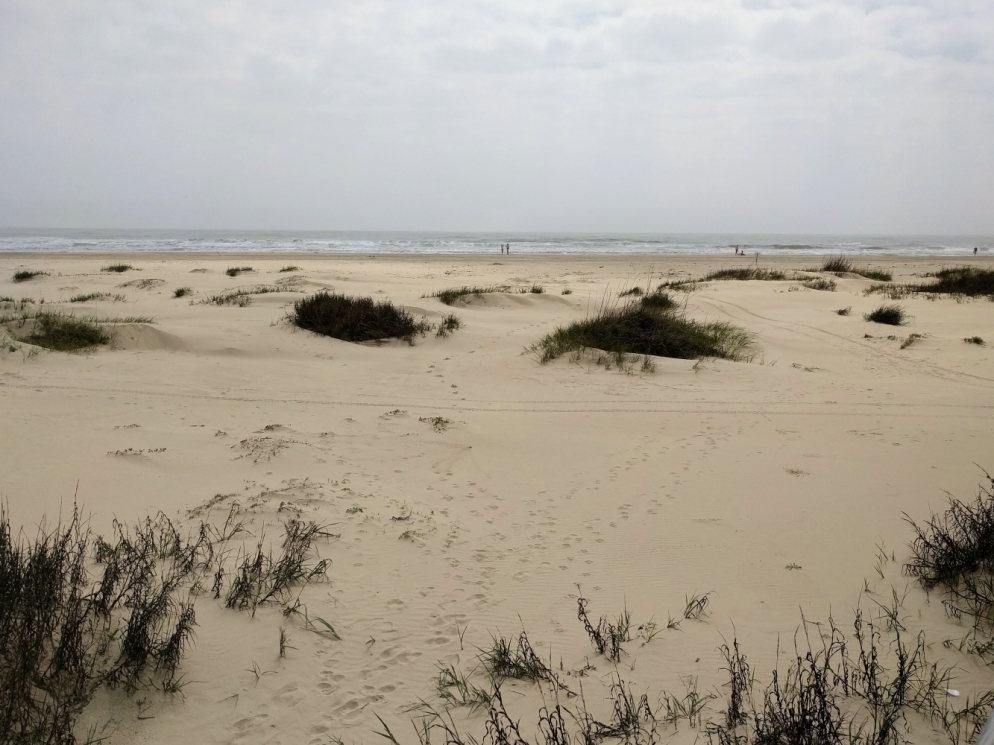 As we headed into April, New Orleans was again calling.  Driving across Louisiana, we hit a couple of our favorite breweries.

First we stopped at Parish Brewing Co. in Broussard.

Parish makes some amazing brews.  But frankly their taproom is pretty boring.  They could learn a thing or two from the guys at our next stop.

Next we hit Bayou Teche Brewing, which we have written about before.  In fact, it was just about a year ago that we first discovered the place. They have the taproom culture down.  There was a great band, some people dressed as pirates (we don’t know why) and we even met a guy who had kayaked to the brewery (yes, it’s on a bayou).  We also played their weekly music trivia and won free beer.  But wait, there’s more…they also let us camp overnight (again), thanks to the Harvest Hosts program.  What’s not to love?

The next day we checked out an area that’s new to us, the North Shore of Lake Pontchartrain.  We stopped for lunch in Abita Springs.  It was Easter, so some things were closed, but there’s a nice park in the center of this very cute little town.

The park is home to the Abita Springs Trailhead Museum (alas it was closed for the holiday) and sits alongside a nice paved trail.  We had lunch at the Abita Brew Pub, just off the trail, and learned that this trail connects several of the towns on the North Shore.

One of those nearby towns is Mandeville, our next stop.  This is a lovely little spot right on the shore of Lake Pontchartrain, filled with historic homes like this one.

There’s a lakeside park with a path for strolling and taking in the views. 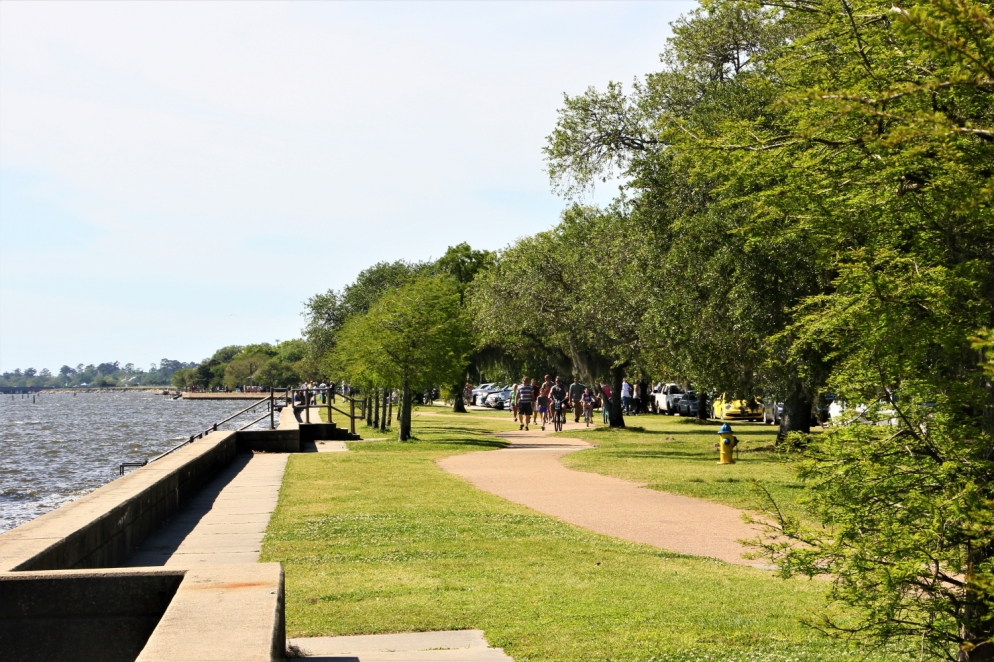 And there’s even a bit of beach.

There are also lots of places to explore by water.

We decided to spend the night at Fontainebleau State Park, just outside of Mandeville.  It was Easter weekend and we weren’t the only people with that idea. 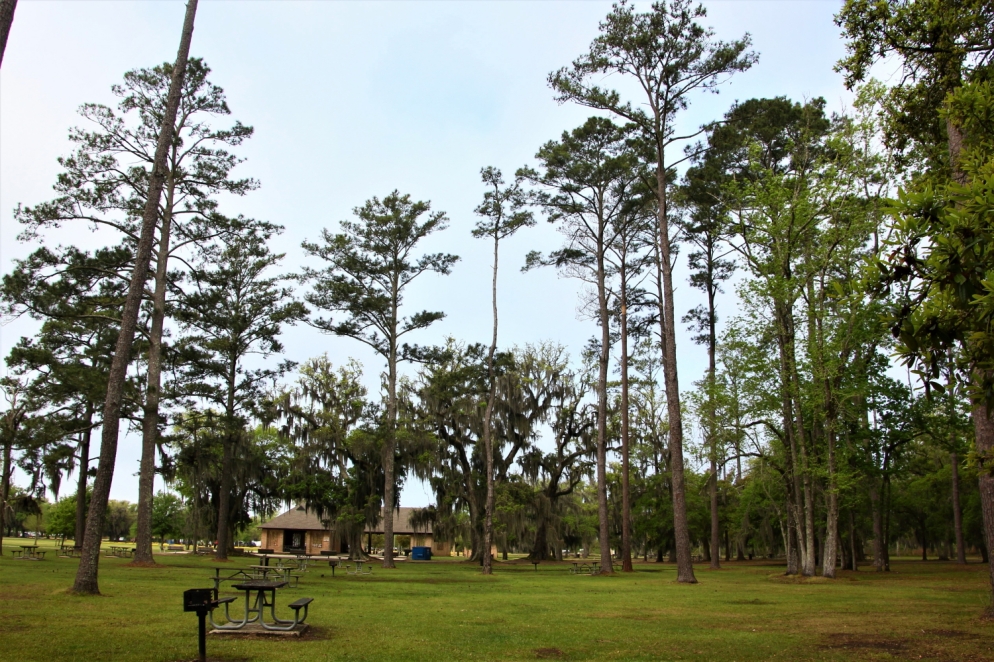 Also sitting on the shore of the lake, the park has lots of facilities and its own piece of beach.

The real motivator for this visit to Louisiana was family.  We met our little sis Erika and her husband Chad for their first time in New Orleans.  Technically Erika is Michael’s little sister, but we dispensed with such distinctions long ago.  You might recall that they visited us when we were housesitting in Calderitas, Mexico.

While we tried to mix in some culture, this trip was largely about eating.  We had breakfast at Stein’s Deli.

We had oysters and crawfish and po-boys at Acme, an obligatory stop.

We had wine and cheese (and some . . . interesting jazz) at Bacchanal, in the city’s Bywater neighborhood.

And of course we had beignets at Cafe du Monde, lots of other oysters, and the eating (and drinking) goes on and on.

As proof of at least one historic activity, on a stroll through the Garden District we visited Lafayette Cemetery No. 1.  In historic cemeteries like this one, New Orleans folk are buried in elevated tombs.  Most of these are family tombs, but some are tombs of organizations,  like the Jefferson Fire Company tomb below.  [click to enlarge] 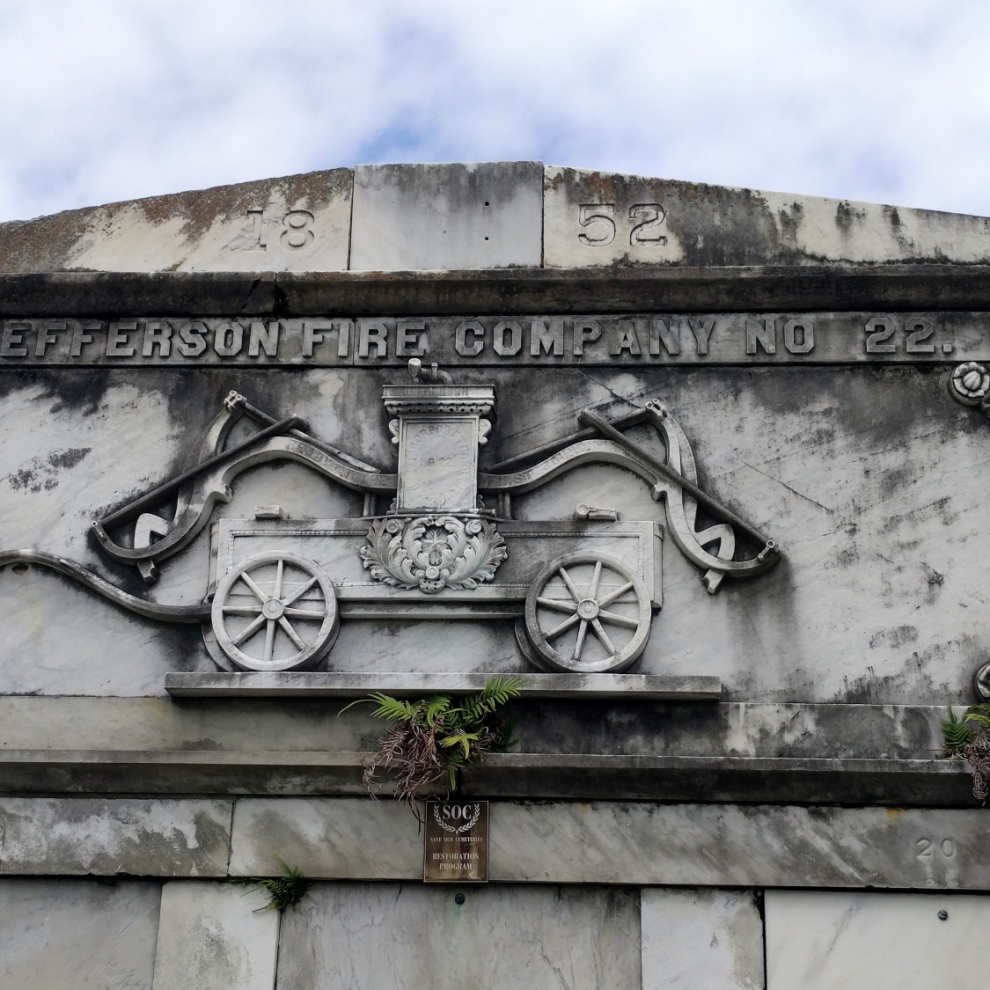 We also strolled the French Quarter, rode the streetcar, visited City Park and Audubon Park, and heard music on Frenchman Street.  It was fun to experience one of our favorite places with newbies.  Hopefully we’ll do it again sometime.

From New Orleans, we drove to Pensacola, Florida.  Our college friend Trent, who was in Alabama last year, is there now in Pensacola with his fiance Tracy.  Before getting to their house, we decided to take a walk around the old part of Pensacola.  Surprise!  We found a brewery. 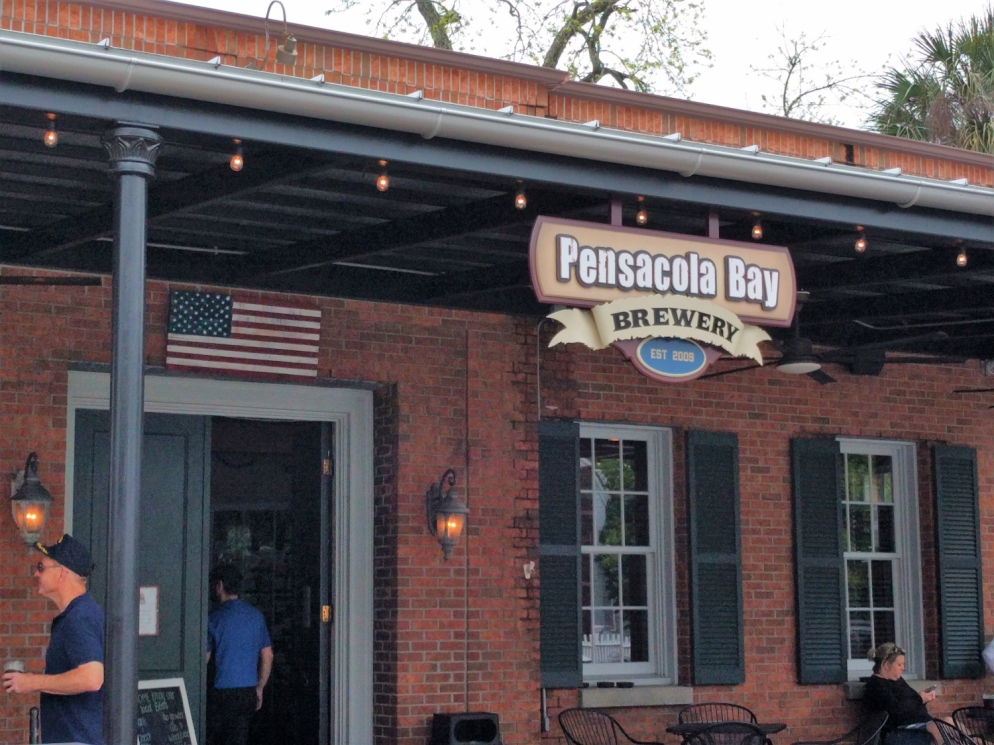 Following what seems to be a pattern for us, we also stumbled onto the Pensacola Jazz Festival.  (Other festivals we have recently stumbled into, besides the Matagorda Seafood Festival above, include Mardi Gras in Playa del Carmen, Northwoods Music Festival, Dungeness Crab & Seafood Festival, World Championship Crawfish Etouffee Cook Off, French Quarter Fest, Gulf Coast Oyster Cook-off & Festival, and Loveland Fire and Ice Festival.) 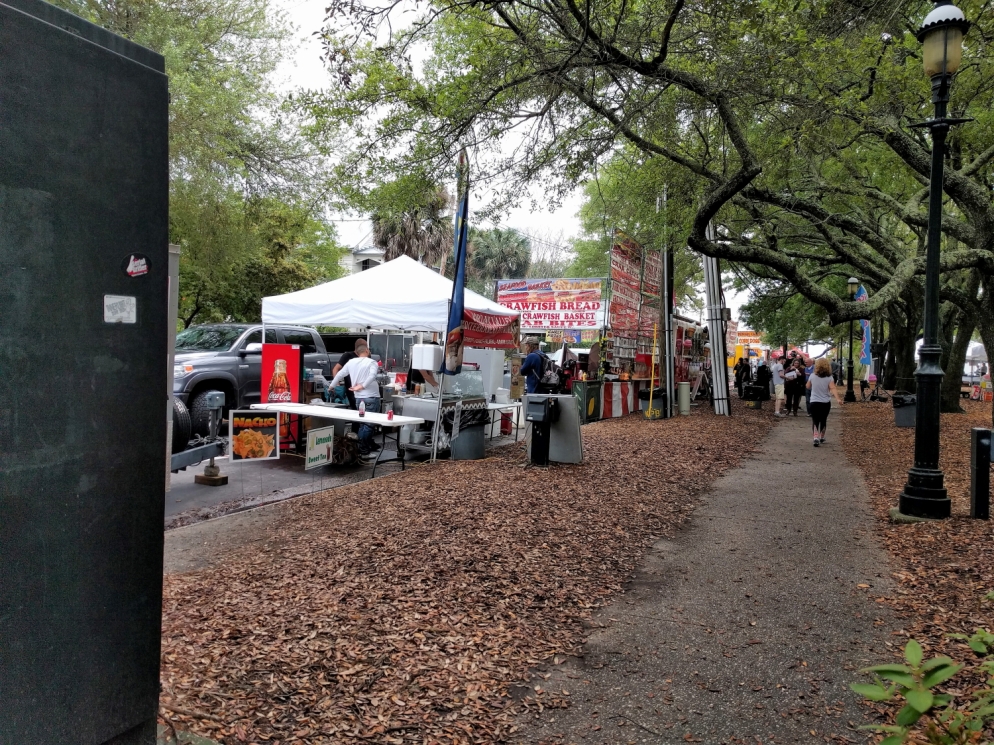 Turnout looked decent in spite of an overcast day with intermittent rain. 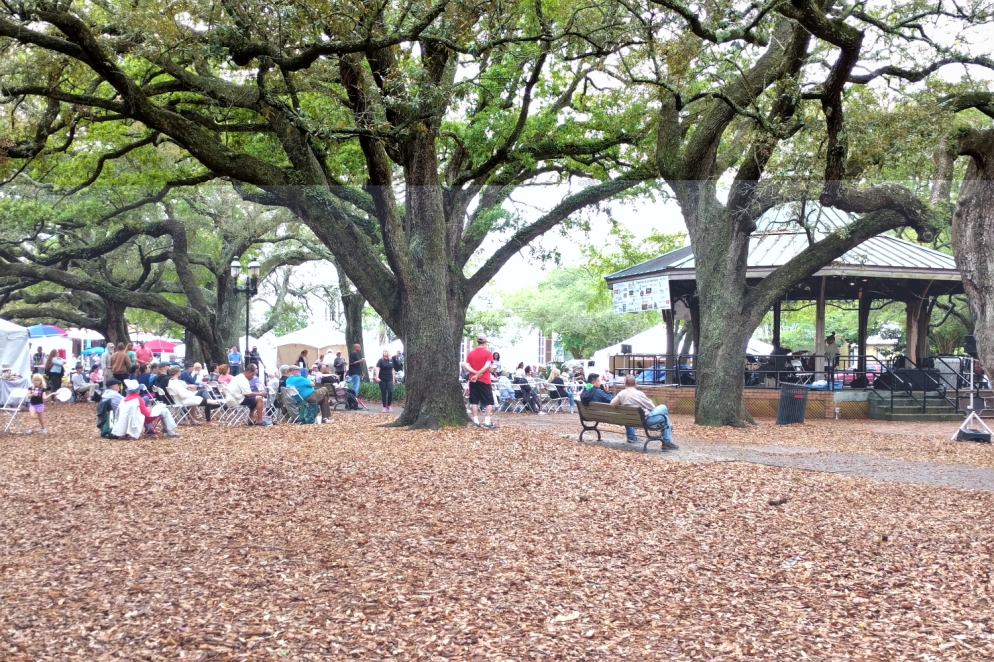 We didn’t take any pix of Trent and Tracy.  We had an awesome night with them stuffing our faces with way too much sushi.  Hopefully we’ll see them again soon.

From Pensacola, we made the short drive to Topsail Hill Preserve State Park.  In what could turn into an annual tradition, we connected with Terry and Michelle, who we’ve told you about in a couple of previous posts.  The weather continued to be cool and overcast, but the beach was still beautiful. 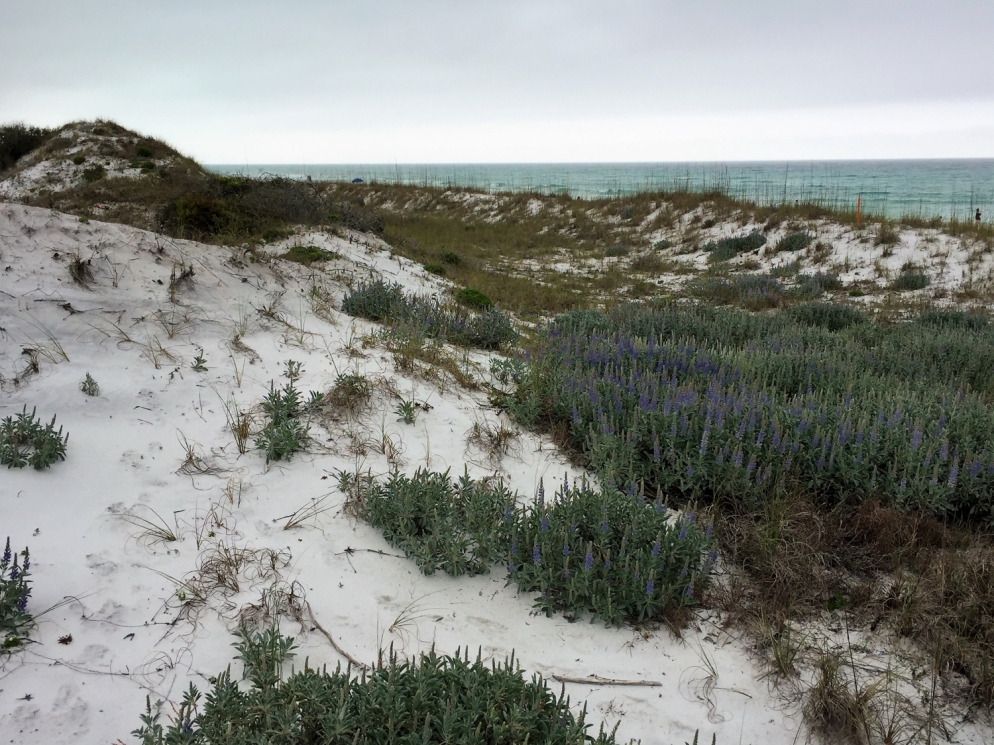 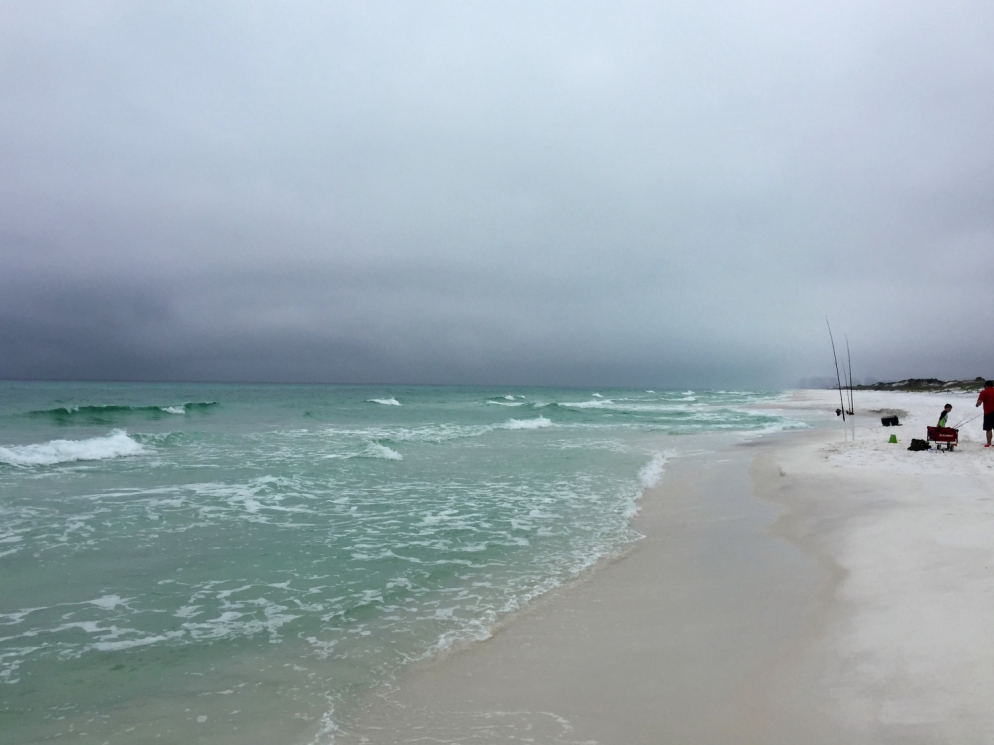 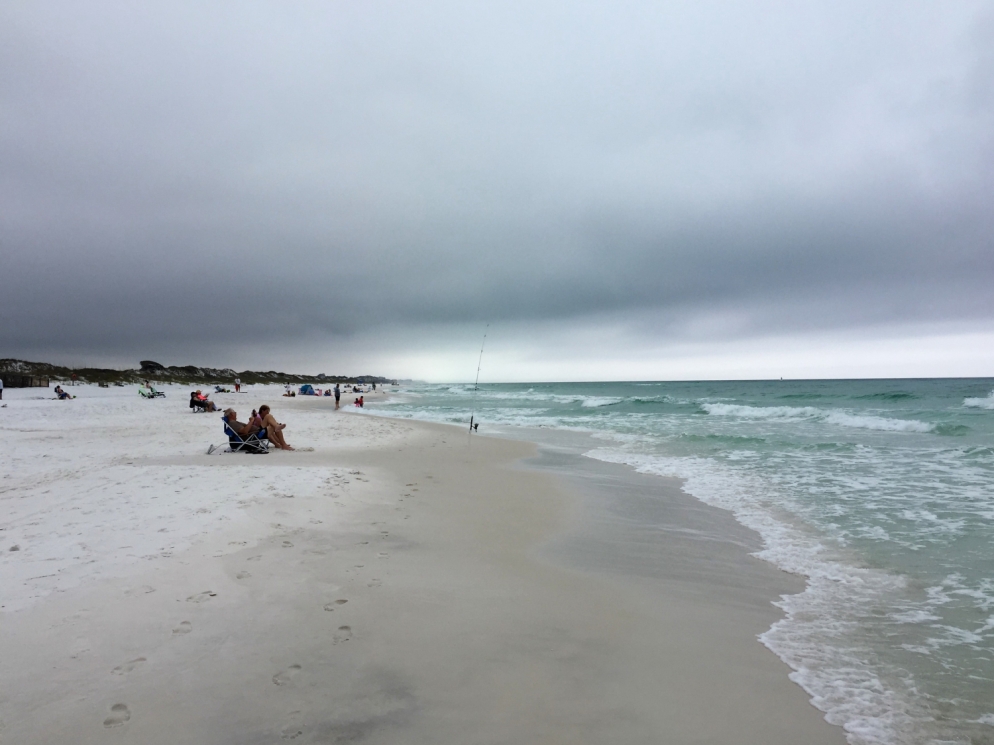 Terry and Michelle were spending a month getting away from life as usual and the harsh winter in Northern Wisconsin.  They had a travel companion along.  Meet Bailey, possibly the world’s cuddliest Rottweiler. 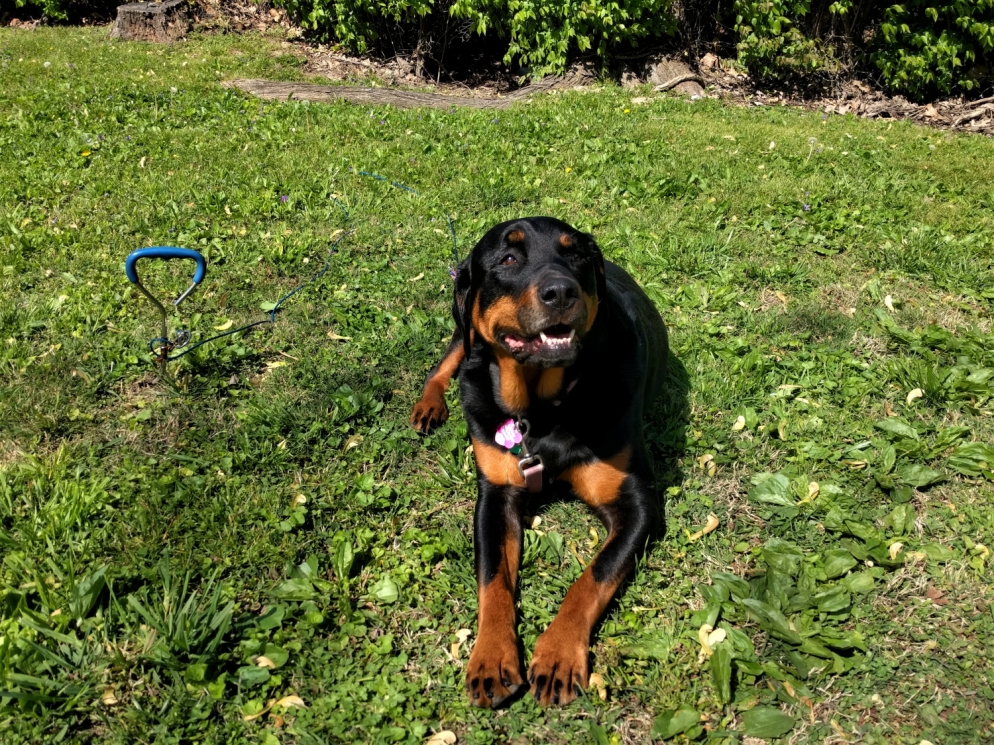 Our adventures with Terry and Michelle continued beyond the Emerald Coast a/k/a Redneck Riviera.  We’ll tell you about that next time.

Thanks for checking us out!