Like Campeche, Valladolid is a colonial Mexican city that we had visited in the past.  Also like Campeche, it has done a lot of work to make itself more attractive and more user friendly than in the past.  These efforts seem to have paid off.  We saw more people walking around who were apparently tourists than we have anywhere (off the Caribbean) during our journey.

We were forewarned by a guidebook that hotels in Valladolid are not a good value.  We quickly found support for this warning.  After walking around and inquiring about rooms at several hotels, we came to Hotel Zaci, well-enough reviewed by fellow travelers.   We asked about and were shown an acceptable room.  We went back to the desk and paid for the room and were given a key for a different room with the explanation that the first lacked a TV.  We went to park the van in the hotel’s lot and gather our stuff.  While parking we realized that the hotel shares its back wall with the local ADO bus station, which is constantly (and loudly) announcing arrivals and departures.  This was not apparent inside the hotel’s walls while we were checking in.  Strangely, it seems the hotel is using a wood fired boiler:

When we went up to the second floor room, we found the AC sounding like a jet taking off in the room, but more importantly, one side of the bed was broken so that anyone on that side was in imminent danger of rolling onto the floor.

Laura went downstairs, explained the issue and asked for a different room.  The hotel manager got involved and offered a third floor room.  Entering that room, we found that we were now high enough to hear the constant (and loud) bus announcements through the bathroom window.  We didn’t find this ideal, but we could deal with it.  The AC shared the same decibel level of its downstairs cousin; again, not ideal, but not a deal breaker.  Then Michael went into the bathroom and discovered a large pile of mostly, but not entirely, dead ants. 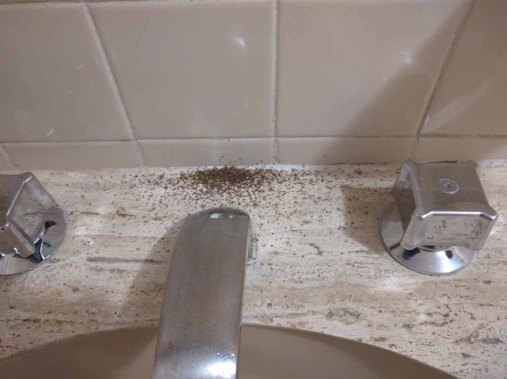 He captured this photo to show the front desk.  We hauled our bags downstairs and showed the staff the picture.  The manager did not offer another room, just told his staff to refund our money.  Apparently we were more trouble than we were worth.  So, we were now at about 7 pm with no hotel.  We walked around to a couple more places that were more expensive and crappier than the one we’d just left, so we decided that our house was a preferable option.

We had avoided urban boondocking (i.e. camping parked on the street) during our time in Mexico so far, having always stayed somewhere with explicit permission.  But boondocking in towns is one of the benefits of a vehicle that can park pretty much anywhere, and we had recent’y been encouraged by a German couple we met sitting at the top of the big pyramid in Calakmul who had been in the country longer than we had, boondocking the whole time without incident.  And they were driving a Suburban and pulling a camping trailer.

So having struck out on hotels, we found what appeared to be an upscale and quiet street and parked.  We then walked over to a local sidewalk cafe to get a beer and a better sense of the neighborhood.  It seemed nice and our waiter assured us that there was no problem with overnight parking (we didn’t explain that we were camping).  So camp we did, without incident, for two nights in this very pleasant neighborhood.  Our third night in Valladolid we felt we had earned a splurge on an expensive hotel ($50!).  When the weather is not too hot (as has been the case most of our time in the Yucatan) it’s really the bathrooms, and to some extent kitchens, that we value in a rented room. We have found our house to be pretty comfortable to sleep in.  The bathroom and kitchen facilities are acceptable, but minimal.

One of the Valladolid sites we visited was the Convent of San Bernardino of Siena.  This was a kind of random coincidence as we spent a summer in Siena, Italy in 1996, where we learned (and since forgot) about the saint.  It’s a Franciscan monastery constructed between 1552-1560.  (The name convent is misleading; this was definitely a place for friars, not nuns.)  There is a cenote on site and in the early 1600s the friars constructed a complex hydraulic water wheel system to provide water for the site.  Of course the wheel is long gone, and no one seems exactly sure how it worked. 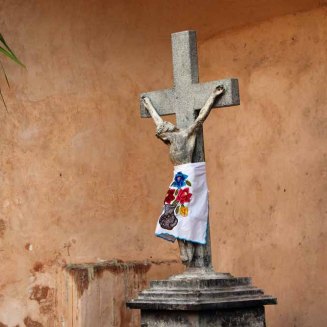 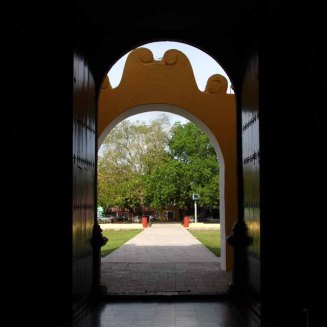 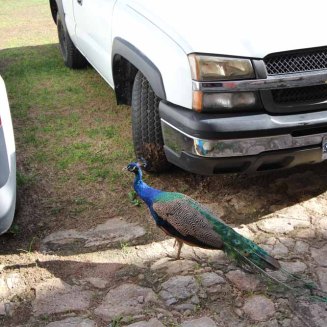 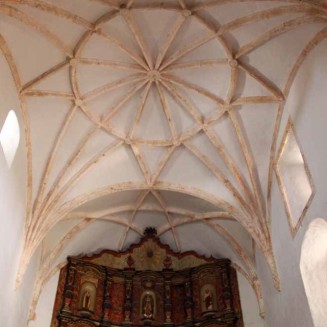 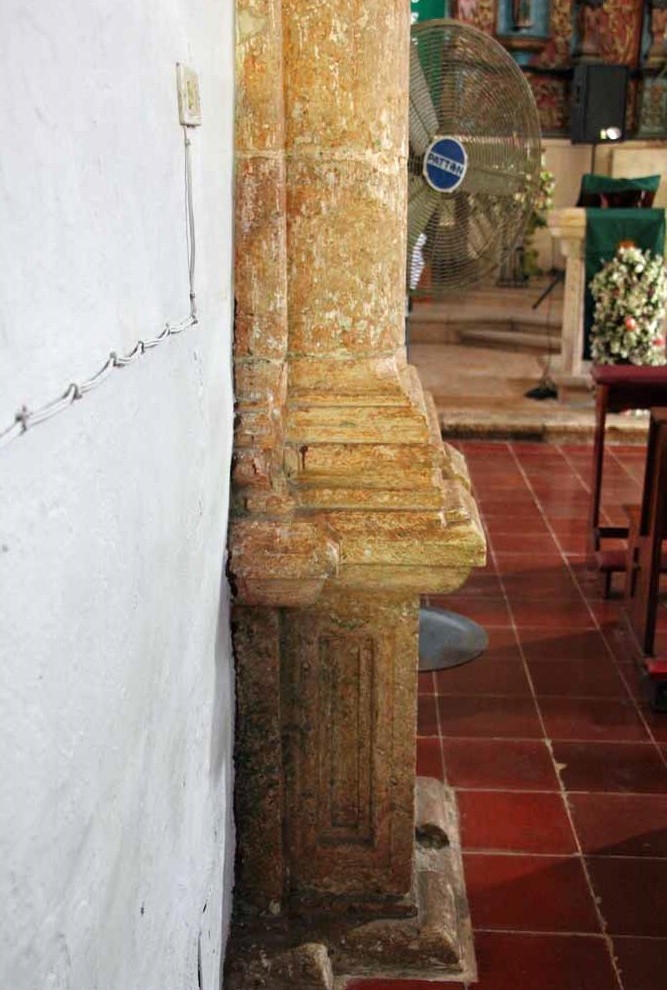 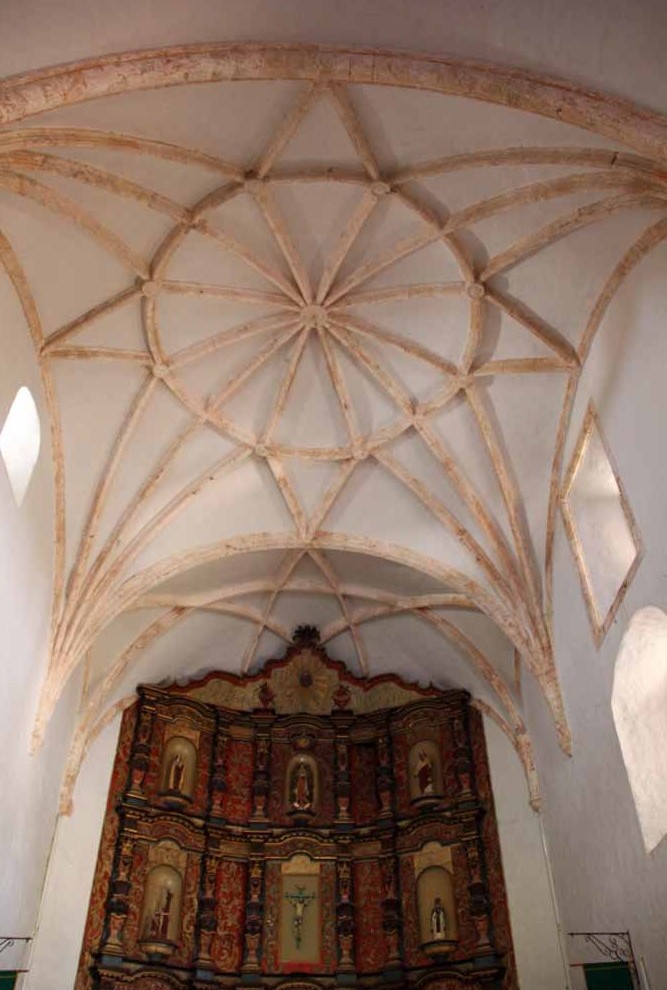 Later the same evening we had a bite to eat across the plaza from the Convent.  Suddenly the street lights went out and we started hearing a loud booming voice.  We went to investigate and found a spectacular light and sound show being broadcast on the side of the convent.  We had seen no mention of this in any review of the facility or inside the facility. 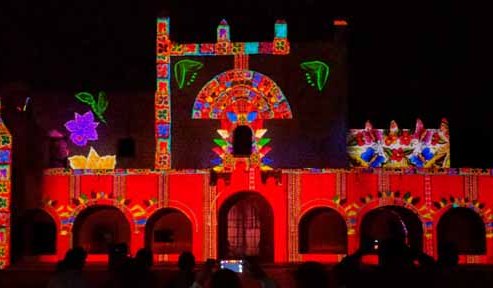 There are lots of cenotes in the Valladolid area, including one right in the middle of town, 2 blocks from the central plaza:

We also toured Casa de los Venados.  This is a private home renovated by a couple from Chicago about 10 years ago.  It houses their extensive collection of Mexican folk art, 3000+ pieces.  The art was spectacular, but the house without the art would be worth a tour.  We have house envy!  The home owners request a modest (less than $5) donation in exchange for the guided tour, and use the proceeds for various philanthropic endeavors. 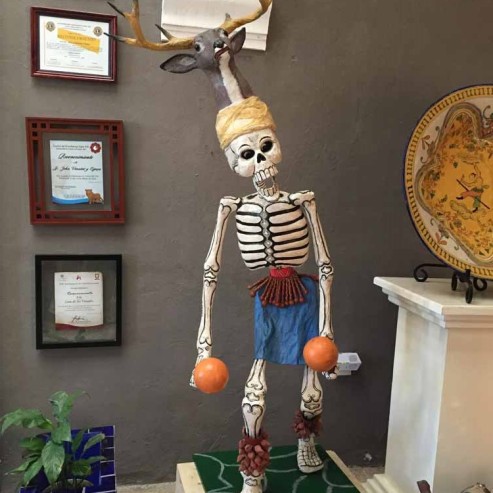 Venado means deer. There are lots of deer.

The center courtyard of the house 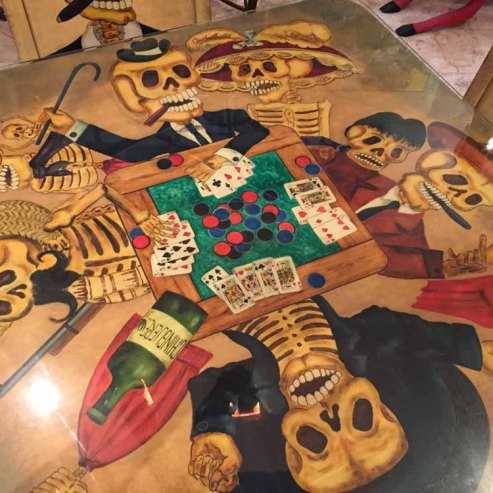 This table (and matching chairs) are a riff on the velvet painting of dogs playing poker. 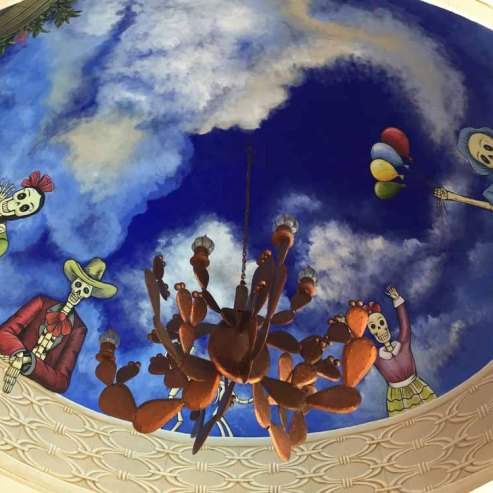 Everything you see here is made of paper mache.

Full of colonial culture and Mayan ruins, we’re once again off to the Caribbean coast, where we’re sure to find neither!

One thought on “Our House in Valladolid”